Living and Working in Bangkok Weather

Located in the heart of tropical Asia, Bangkok is hot for much of the year and I remember reading somewhere that it is the second hottest major city in the world. There isn't a great variation year round in the temperature with the average daily high around 36 degrees Celsius in April, the hottest month and about 30 in December which is the "mildest" month. Many Thais joke that Thailand has three seasons – hot, hotter and hottest!

Most agree that the cool season is the most pleasant time of year in Bangkok. Overnight lows run from a low of about 20 in the cool season to mid to high 20's in the hot season. While long term Western residents may disagree, anyone visiting from abroad would think that Bangkok never really gets cold although some parts of the country, especially parts of the North, can get a lot cooler overnight at this time of year. It is hot most of the year and after a year or two in country you do sort of get somewhat used to the heat – it took me a couple of years. One thing's for sure, after you have stayed for a while, if you decide to return to the west, you will most likely find it VERY cold when you return! The hours of daylight do not seem to vary too much throughout the year and the sun sets after 6:00 PM and before 7:00 PM. The sun comes up in the morning between 6:00 and 6:30 AM in Bangkok and it varies little nationwide.

Bangkok is a VERY heavily polluted city and wherever you go in the central city, the air is just about thick enough to chew. It's a murky cocktail of vehicle fumes, factory smoke, rubbish burn off and God only knows what else. As you move further out into the suburbs, the quality of the air improves, a little, but it's still not great. This pollution can make Bangkok feel even hotter than it is and it all contributes to the distinctive smell that many associate with Bangkok, a smell that initially makes you gag but in time becomes something that you slowly get used to and in time, perhaps even like. Returning to Bangkok after a period of time, you actually appreciate that smell, because you know that you have arrived home!

One of the most frequently asked questions about Bangkok weather relates to the monsoon, or rainy, season. Just how much does it rain, and how does it affect life in the city? Let me say first of all that the rainy season is not quite the same every year. Some years it rains a lot more than others. In 1998, my first year in Bangkok, it seemed like it rained every day in the rainy season, and rained for quite a few hours every day. It was absolutely relentless. But then in 2003 I remember the rainy season was really mild and by the time we reached the cool season we were all 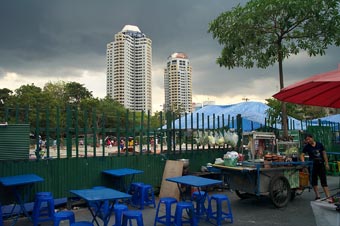 wondering just what had happened to the rainy season. When it does rain in the rainy season, should you find yourself outside then escaping the rain is impossible. You only need to be exposed to it for 10 – 15 seconds to be totally drenched right through. To make matters worse, parts of Bangkok can flood really badly.

The city administration has introduced measures to reduce the flooding but short of covering the city with a massive great waterproof dome, flooding will probably continue to be a problem in the rainy season. If it rains really heavily and you are unfortunate enough to find yourself outside, under the elements, you will get wet no matter what you do or what you wear. The rain absolutely hoses down, the traffic slows to a crawl, travelling any distance in a car becomes painfully slow and everything slows right down to a snail's pace, sometimes to a stop. In my first year here, I heard many stories of people coming to / from work taking 4+ hours each way! (Back then there was no skytrain nor underground.) This really does vindicate my advice elsewhere on this page to live close to where you work. Quite simply, when it rains, it is often quicker to walk to work / home than rely on public transport. It tends to rain most heavily late afternoon and sometimes into the early evening. It's worth getting a sturdy umbrella as some of the cheaper ones, particularly the 99 baht variety, just get blown to bits by the swirling winds and driving rain. Having said that, the smaller ones are convenient if you're not sure if it's going to rain as they can fit inside a bag or briefcase. I keep an umbrella at home and another at work, just in case. At the end of the rainy season, just before the deceptively named "cool" season, you get a lot of really loud thunder, and this is a sign that the cool season is almost here.

The city feels "fresher" in the rainy season and a lot of the haze that sits over the city, and in fact much of the country, in the hot season, gets blown or rained away. The idea of visiting Bangkok in the rainy season puts many off, but really it shouldn't. It doesn't rain for that long, and when it isn't raining the city is much more pleasant than at other times of the year.

"Officially", Thailand has three seasons but I really feel it is more like four and I would classify them as follows:

So what the hell is this fringe season that I am talking about? No guide book nor website mentions that! Well, during this time, the weather is awfully changeable and unpredictable and you cannot really refer to it strictly as the hot season or the rainy season. You get some days that are very hot, some days that can be wet and it is usually pretty damned humid but then you might get a few days when it is cooler – it's a bit of a lottery really. Note: Stickman's season guide applies to Bangkok only and not other provinces which may have the same weather but a little earlier if up north or a little later if down south.

During the hot season, it gets uncomfortably hot (around 38 degrees Celsius most days but sometimes 40+) and if you have to travel around the city, you should try and jump from air-con to air-con, be it skytrain / shopping centre / restaurant / taxi etc. to avoid sweating like a pig. Although these temperatures aren't actually a lot hotter than other times of the year, it seems to be much more humid then. Walk more than a few hundred metres and you'll even see the Thais sweating. Walking at a slower pace, jumping in and out / through air-con buildings and walking at a relaxed pace in the shade can all contribute to keeping you cooler. At this time of year, you may find yourself changing your clothes once or sometimes even twice a day. Needless to say, you'll start to understand why the locals shower at least twice a day, everyday. In the hot season I have sometimes found myself taking 4 showers a day. 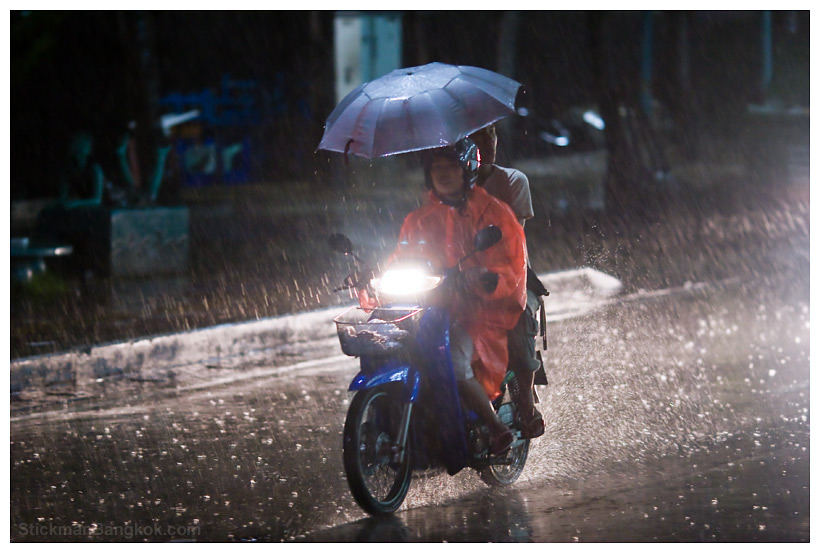 The cool season of 1999 was unusually cool. While the temperatures usually drop to about 20 overnight in Bangkok, in December of 1999 the overnight low dropped down to 12 degrees on three separate occasions and some days, the daily high only reached 23 which is remarkably cool for Bangkok! This was a lot colder than normal and it was novel to see so many people walking around with jackets and pullovers on. Still, this is not normal and most people find they do not need any "warm clothes" at all in Bangkok.

Apart from being hot most of the year, the air in Bangkok is also very heavily polluted. The first time I came to Bangkok, I was only here for three days but picked up an horrendous cough that took almost two weeks to shake off. When I returned home, the people I worked with said that it sounded like I had smoker's cough and they genuinely believed that I had started smoking. The worst pollution seems to be in the central areas, namely around the Central World Plaza and around Silom Road. The further out of Bangkok you get, generally the better the air gets.

For me, the worst season is the hot season. It is quite simply too hot. The rainy season can be annoying for an hour or two each day when it actually rains, as well as the ensuing hours when there can be traffic chaos, but generally, the rainy season isn't that uncomfortable. The hot season can be really unpleasant and actually is the time of year when I feel inhibited to do certain things. I enjoy walking but in the hot season if you go outside any time between about 9 AM and 5 PM you'll break out into a sweat in minutes. And if you happen to find yourself outside in places where there is no air-conditioning like an outdoor market, especially a busy one – Chatuchak (also known as the weekend market), it is almost unbearable in the heat of the hot season. Other parts of town, such as Chinatown, pictured here, can also be very difficult and uncomfortable to negotiate in the heat of summer, a time when tempers often get tested!

It is ironic that many Westerners say that they like to escape the cold of their own country for the heat of Thailand. The heat is all very well if you are at the beach, but in the heat of the hot season, Bangkok and much of the country can be incredibly uncomfortable. I personally think that the heat is worse than the cold, but that's just one man's opinion. I also think that the weather in Thailand is not better than the weather in the West, in fact far from it. The cool season is pleasant, and that lasts all of about 3 months of the year. The rest of the year the weather is not all that comfortable – meaning that for 9 months of the year the weather isn't that great. Most places in the west have several decent months of weather.

Thai people seem to have an uncanny knack of being able to accurately predict the weather and I sometimes wonder why they bother with weather forecasters here. Want to know what the weather is going to do today? Simply ask the nearest Thai person – their forecast will likely be fairly accurate! But having said that, while they may know that it is going to rain, they still often forget to take their umbrella with them, even in the rainy season… 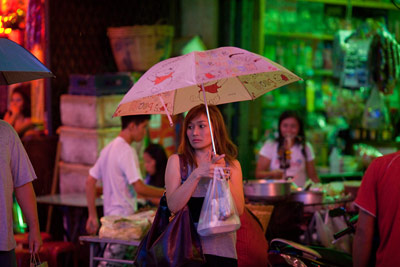