Living and Working in Bangkok 2004 Update

Life is changing in Bangkok, especially for Westerners living here. In the time that I have been here, the city has become more modern and cleaner. The skytrain, new shopping centres and the general modernization of a lot of older, dingy buildings and the addition of a lot more trees in the central city area has made the city seem like it is a more pleasant place to live, at least on the surface.

Shopping has got a lot better in Thailand and the range of goods available is even greater than ever before. Where you once had to wait for trips back home to get 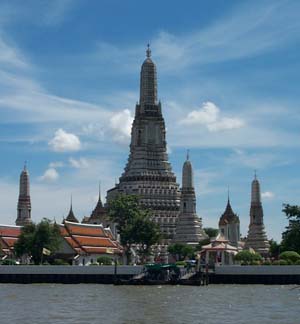 certain specialty items that may not have been available in Bangkok, you can now get virtually everything here. Even favourite brands of food can often be found in one or other of the supermarkets that have a host of imported items. Books are released just a little later than they are in the West and movies at virtually the same time. It often feels that you can get almost anything here in Bangkok and if you can't you can just get online, find it and order it that way!

But it is not all positive I am afraid and there are quite a few negatives, some of them quite serious. As one would expect, prices have gone up across the board. Even the buses have gone up in price! Apartment prices have gone up, no doubt fuelled by occupancy rates that are much higher than they were 5 years ago. And the apartments that have not moved in price are a lot harder to get into than in the past, some buildings even have long waiting lists. Property prices have started to move again, and they are moving north at quite a rate. If you have confidence that things will not go bang again, like they did in mid 1997, then no is probably a god time to buy.

In 1997, it cost 60 baht to go and see a movie and now it is 100 – 140 baht, depending on where you go. Food costs across the board have moved, moved up that is. While the cost of petrol has gone up, one has to have a bit of sympathy for the cabbies who still charge the same tariffs as they did when the baht crashed, way back in the middle of '97. Despite continued calls for taxi fares to go up, they remain ridiculously low.

The government has started to get much tougher on visas for foreigners and anyone applying for a three month visa, or multiple entry visas at Thai embassies and consulates abroad, will no doubt have noticed that they are a lot harder to come by than they used to be. For people who are just living in Thailand on tourist visa after tourist visa, they are now getting hassles at immigration points and there is all sorts of conjecture that the government will finally put in place a policy to prevent people living in Thailand this way,

The current government has brought about various policy changes that seem to discourage farangs from living here. Some of them seem to make complete sense and you have to admire the government for implementing such policies, but others are a little hard to understand. However, at the end of the day this is Thailand, and the Thais are free to do what they want. If they do not want us to stay, we have to leave, and that is the bottom line. We do not have the right to stay here at all unless we have become naturalized Thai citizens – which is incredibly unlikely. But with this in the back of our mind, it really does make the average farang wonder how long they want to stay here and perhaps more importantly, what level of investment they are prepared to make. If there is a concern in the back of our mind that we might get kicked out, we are hardly going to go and buy a condo or a house, are we?

I have heard it said that the Thai smile is much harder to find in Bangkok than it used to be – and I believe it. There is, in some circles, anti-foreigner sentiment in the big city, but don't be too concerned, it's nothing like you hear about in the likes of Jakarta and some of the other major cities in Asia. But yeah, where farangs were once a novelty that Thai people warmed to, there are now more than a few locals who are not at all fond of our kind, some falsely believing that we were responsible for the last crash in the economy, others jealous at the fact that the average foreigner in Bangkok, be it tourist or resident, has one hell of lot more money in their pocket than the average Thai. More and more, it seems that Thais see us as a meal ticket and many are not doing a very god job at hiding their thoughts.

Overall, Bangkok is probably a more livable city now than in the past. A lot of the nonsense of the past has been put paid to by changes in law and / or better police enforcement. A lot of people talk about the good old days but when doing so, they conveniently forget such nightmares as the pre-skytrain era in terms of getting around, the fact that many food products were never available and the fact that while the nightlife might have been more wild in the past, so there was a huge cost to the many Thais who got caught up in it and suffered in one way or another.

I believe that for the wholesome farang who is legally in Thailand and leading a decent lifestyle, Bangkok is better than ever. For folk who were into illegal activities, working without work permits or for sexual predators who were here for pleasures of the flesh and little else, then Bangkok is probably not quite the place that it once was. I think Bangkok's truly wild days are largely a thing of the past ad the city really is growing up. And surely that has got to be a good thing!