Living and Working in Bangkok 2005 Update

The past 12 months have been a funny period for me, a period which should have been the best in my time of living in Thailand, but actually, they have probably been quite the opposite.

Unfortunately the longer I stay in Thailand, the more I realise that we Westerners and the locals are so different in so many ways, and sometimes the two just don't get along together in perfect harmony.

So, what are my current thoughts on life in Bangkok? I have, unfortunately, become more cynical than ever. A big part of me thinks that Bangkok loses a huge amount of its attraction when you take women out of the equation. Yep, I'm serious. For the single guy, Bangkok really could be heaven on earth. If you're a naughty boy, there are a lot of bars where you can go and meet a lady who will expect to be paid for the entertainment she provides, while alternatively, there are huge numbers of Thai women who would be delighted at the chance to meet a genuine Western guy for a genuine, long term relationship. In this respect, Bangkok is first class. 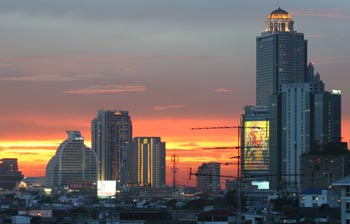 But once you've got beyond this, perhaps once you have become bored of the bars or are already in a serious relationship, then perhaps, just perhaps, Bangkok starts to lose some of its appeal. So many of the things that Westerners like to do in their spare time are not possible here, or the local version just isn't as good as what you may be used to in the West. Sporting opportunities, be it partaking or as a spectator, really are not that good. The problem here is the weather. It is just so hot and not really conducive to playing sport. As far as spectator sport goes, there isn't that much that appeals to Westerners, be it football, cricket, tennis, or whatever.

But one could argue that there is much more to life than women and for sure, you'd be right. The problem is, that how do you then spend your time? Sport? No, already addressed that. Art and culture? Bangkok doesn't really have that well a developed an art scene when compared with the West. Yes, there are art galleries and some of what is around is very impressive indeed, but really, Bangkok does not compare well with the West in this respect. Spend time with friends? There are a heap of Westerners living in Bangkok and estimates run around 100,000, but this group is largely transient so friends you made last year may have moved on to another part of Thailand, another country, or returned to the West. Further, there are a lot of really questionable Westerners living in Bangkok these days. I ate to say it, but its true. There are a lot of people living here who you would not want to spend time with in your home country, so why would you want to spend time with them here?

Getting around the city is a major pain in the ass. I remember a student of mine once telling me how he was applying for jobs and how in Bangkok you could never attend more than one job interview a day, largely because the traffic is oh so bad and it is impossible to plan for. Even with the introduction of the underground, it can still be a mission to get anywhere. You have to plan every journey and you can't just jump into your car, go for a drive and think "I'll stop for a nice lunch when I see somewhere that looks interesting". Journeys MUST be planned unless you are happy to be stuck in the worst traffic jams imaginable. This is a biggy.

For the average Westerner it can be hard to get things done. Bureaucracy can be phenomenally bad. One of the problems I had about life in New Zealand was that it seemed I was always doing "maintenance type things". Car insurance, car registration, tax, getting things serviced or repaired, paying bills etc. If it wasn't one thing, it was another. I often felt that I seldom had the time to do the enjoyable things in life. As my life in Bangkok has become more and more settled, I have found the same problem here, expect that it is much, much worse. Dealing with authorities here can, in some cases, result in the most ridiculous levels of bureaucracy. Simple things can be made very difficult and the amount of red tape, while apparently less than it was a decade or so ago, is still much, much worse than the West.

And don't think it's just me who is jaded here. I hear the same comments from many medium or long term expats.

But don't get me wrong. Bangkok has a lot going for it, it really does. I think the biggest thing however is that Bangkok remains affordable. Most things are inexpensive, especially if you wish to live a lifestyle much like the local Thais do. If you're happy in a smallish apartment, eating from street vendors or street-side stalls and using public transport, then there is no reason why you could not get by on around 20,000 baht per month. Many Westerners, particularly English teachers, are able to do this for a while but eventually most revert back to a Western style lifestyle, one where they predominantly eat Western food, live in a larger place of abode, be it a house or a larger apartment, and desire a vehicle of their own. A Western style lifestyle in Bangkok can cost as much, sometimes even more, than a similar lifestyle would in the West – London, New York or other expensive cities excluded.

I just now wonder, after 7 years in Thailand, if my time in the City Of Angels is soon to come to a close? I think one can get stuck here and as much fun as life in the city can be, perhaps it is best to get out, experience the West for a while, take stock, and review the situation with a view to either staying on in the West or perhaps returning to Thailand again at some time in the future.

So, what am I saying? Well, Bangkok is a great place for the single guy. It is a great place to spend a year or two, or maybe even three. For anyone who is REALLY into Thai / Asian culture, or perhaps Buddhism, then Thailand is first class. If you don't have a huge amount of money and want to live in a country where most things are affordable or where you can get by on a modest amount of money, then Thailand is a very good option. But long term, I don't know, I really don't…