Living and Working in Bangkok Orientation

Bangkok, a city of over ten million people has experienced phenomenal growth in the last thirty years. In the early '70s, the city had around 2.5 million but now has well in excess of 10 million inhabitants as many Thais from the rural areas have moved to the big smoke in search of employment, and a better lifestyle. This rapid growth meant that Bangkok grew too fast for its infrastructure and the centre of the city could accurately be described as organised chaos and with this in mind, Bangkok is a little unusual in that it doesn't actually have a city centre as such.

Some people consider the heart of the city to be the Silom and Sathorn Road area which is the financial district and the commercial centre where many of the banks, financial institutions, international corporations and embassies have their offices. This is also the area where you will find many office buildings, airlines and some of the best hotels. Others consider Siam Square to be the centre of Bangkok where one can find three major shopping centres at the intersection of Rama 1 Rd and Phyathai Road. It's the main hangout for Thai teenagers and the trendy set and is thus a very good area for shopping. The prestigious Chulalongkorn University, acknowledged as the best university in the country, is nearby. But there are others still who say the heart of Bangkok is Rajadamri Road where it meets Ploenchit Rd. In this area you have shopping centres such as the Central World Plaza (previously known as the Bangkok Central World Plaza) and Gaysorn Plaza plus Pratunam Market, a few embassies and a few of the more luxurious hotels plus the all important Erawan shrine. All three areas are hubs for buses going just about anywhere in the city and Bangkok's sky train services all three areas too. 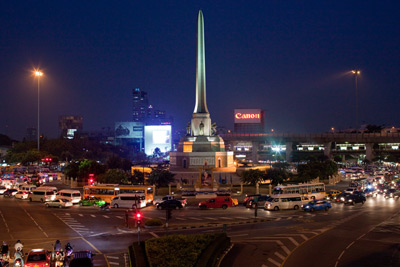 One of the easiest ways to orientate yourself in the city is via Sukhumvit Road which runs into Ploenchit Road and that in turn runs into Rama 1 Road. This main arterial route runs east-west through the city from east of the Chaopraya River all the way to the east of the city and beyond. It is intersected by many major roads running north-south such as Phyathai Road, Asoke, Rajadamri Road and Rachadapisek Road. Sukhumvit Road and all of the lanes (sois in Thai) running off it are popular places for farangs to find long term accommodation in Bangkok.

Bangkok could never be described as a particularly pretty city. Despite there being a beautiful Buddhist temple in every neighbourhood, it seems you cannot escape the drab Chinese shophouses, uneven and poorly laid footpaths and roads, derelict down and out beggars and clusters of electricity and telephone wire hanging haphazardly. Litter clutters many roads and sois (a word you will hear often which simply means lane), rats run around, all contributing to the Thai capital having a very distinctive smell. The sprinkling of temples, canals and even the gently swaying palm trees do their best to dress up the city but ultimately, they fail. Having said all of that, I haven't met a person yet who has come to Bangkok for the aesthetics of the city. Where Bangkok thrives is in the vibrancy and energy that you feel, no matter where you venture. Once upon a time, Bangkok was described as the Venice of the East because of all of the waterways and canals throughout the city and the many wide, leafy boulevards. However, as the city is storming its way towards being a truly 21st century city, the development has happened so fast that many of the city's better features have been ruined as largely unplanned and poorly co-ordinated expansion have seen the city sprawl out in every direction possible, encroaching upon the bordering provinces in much the same way as London grew out over surrounding villages, 100+ years ago. 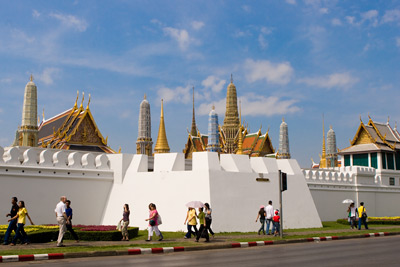