Living and Working in Bangkok Festivals, Rituals and Occasions

In a country where face is so important, ngarn really is everything. The old biddies won't just pull out their very best threads, they'll likely go and get a whole new outfit tailor made, taking the trouble to personally choose the best, most suitably coloured Thai silk they can find (yes, they colour code for various festivals!) Jewellery will be cleaned and every last piece of gold will be pulled out of its hiding place and adorned. Ngarn, a time to be seen and to gain face amongst one's friends, peers and colleagues. But just what is ngarn?! Ngarn is all of the festivals, presentations, announcements and ceremonies that are so common in Thailand. And when these take place, there are several things that you can count on: Not just the participants, but all of the guests too will dress to the 9s. Irrespective of whether it is the AGM for country's biggest company or a small, rural wedding, there will be photographers present who will record everything and these photographs will be prominently displayed for quite some time afterwards. More effort is often put into ngarn than into most other things. I have worked at schools where far more effort is put into ceremonies that is put into the education itself, surely the core service provided by the school? Yep, face really is everything here in Thailand…

Thai style weddings are quite different to what we are used to in the West. Here I refer to Buddhist weddings as I have no experience of Muslim weddings in Thailand. There are generally two quite different ceremonies. The first is the traditional wedding ceremony where there will be 9 monks present which is often held at the family home. This is followed by various acts from water pouring to peetee song dua where the couple are taken into a bedroom and spend some time on the bed with an older couple. Nothing naughty happens so don't get any funny ideas! Traditional Thai weddings are a lot of fun, much better than in the West, at least in my opinion. Everyone seems to be in a jolly mood and despite it being a formal occasion, no-one ever seems to be too serious.

Thais tend to give money as a gift rather than a present at weddings. When you receive a Thai wedding invitation it will be in an envelope with your name on the outside. KEEP THIS ENVELOPE! When you attend the wedding ceremony, you give this envelope with cash inside it. Do not write on the outside how much you gave. As a rule of thumb, you should give either as much as the couple gave you when you got married (you're supposed to record this and keep details for such occasions) or give enough to cover the cost of the ceremony and a little bit more. I once heard that you are supposed to give so much money that it "hurts a little" to give but I don't really buy into that. If the idea of giving money doesn't sit well with you, then you can give a gift, as you would in the West. At some modern Thai weddings, gift giving seems to be getting more and more popular.

For the average Westerner, one of the most interesting parts of a Thai style wedding is the dowry, or perhaps better described, the bride price. The dowry encompasses a diamond ring, a sum of money usually presented as cash, and an amount of gold. This is all negotiated in advance – as what happens with it should be negotiated too. While a little out of place in the description of such festivals, I have always been, and remain, against the paying of such a dowry. There are many reasons for it but if you do get yourself hitched with a local and get married locally, a dowry will be called for. Think carefully as to whether you are prepared to pay it and if you are, make sure you negotiate VERY clearly in advance just what will happen to it. Typical dowries vary between around 30,000 baht up to close to one million.

After the traditional wedding ceremony, perhaps shortly afterwards, later in the day, or even a few days later, there is often, but not always, a marriage party. Usually held at a venue such as a hotel, this bears closer resemblance to a Western style wedding reception. It usually lasts just a couple of hours and the format tends to be the same. All guests who enter will have their photo taken with the newly weds and will then enter a large room (assuming it is in a hotel). Food and drink will be available and these ceremonies tend to be either a cocktail style party, buffet or as tends to be most common, Chinese style banquet. Once all of the guests have arrived, the happy couple will get up on stage, make speeches – to which many guests just continue chatting and seemingly ignore them. Yep, this is one thing I have never quite worked out and in terms of our western ideas, seems to be dreadfully rude! After the speeches, the happy couple will cut the wedding cake and deliver the first few pieces to the VIP guests such as their parents, their senior colleagues and any other VIP guests, particularly those of age. The couple then go around and thank everyone for coming and the guests begin to slip away. The odd thing about this occasion, to me at least, is that the happy couple seem to have less fun than all of the guests, or at least that is my take on it.

As far as attire for these formal occasions goes, one should only wear black for funerals and it is considered an insult and downright bad luck to wear black to a wedding, especially a traditional ceremony. As far as wedding parties go, especially those which resemble a Western style wedding reception, black suits seem to be accepted more, but some traditional Thais still don't like them. It may pay to stick with dark blue, if you want to wear something dark.

Check out the bride at these wedding parties and ceremonies. Often she is done up or the extent that you can't even recognise her! Thai women ALWAYS look great at these occasions. 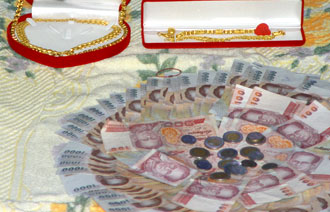 Presentation of the dowry and gold at a wedding.

As far as funerals go, they are likely totally different to anything you have experienced in the West. Funerals do not just last for an hour or two but for a few days and sometimes for up to a week. There are various things that goon with monks coming along to perform certain rituals and different people are expected to go along at different times. Like at weddings, people will generally give an envelope containing cash at the funeral, usually given to the closest relative of the recently passed. The amount that one gives depends on many things ranging from your status and position in society to your relationship with the person has passed away. As a very rough guide, a salaried expat might give an envelope with 1,000 baht up for a member of staff who passed away whereas an English teacher might just contribute 100 – 200 baht at the funeral of a distinctly relative of his girlfriend. Don't worry to much about the protocol at such events as the Thais will fully realise that as a farang, you are a little in the dark. They will generally tell you what to do and when to do it but generally, just showing up and observing, and perhaps paying your respect to any monks or Buddha images will be very much appreciated. Mmmm, forever giving money…I find this a little perturbing, but then I am the first to admit that I will never ever really get the sort of grasp of it where I can truly say that I understand Thai culture.

The Thai calendar has a number of holidays in it, more than any other country that I have visited and this means that seldom does a month go by without you having another day off work – no wonder nothing ever gets done! The major Thai holiday period is the Thai New Year, more commonly known in Thailand as Songkran. This is the time of year when many people return to the provinces to spend time with their family and it is the only time of the year when Bangkok actually feels a little quiet. But what most foreigners associate with Songkran is the madness of the water festival that has got totally out of hand in recent times. All over the country, Thais celebrate the Thai New Year, at what is the very hottest time of the year by having huge water fights. Entire families armed with powerful water cannons and a drum of water jump into the back of the family pick up truck and drive around spraying all and sundry in a celebration that no longer resembles the traditional celebration where a small amount of water was sprinkled on to the shoulders of passers by. As a farang you will be even more of a target and if you go anywhere near anyone celebrating Songkran, you will literally be chased! Even if you are in clothes that indicate that you are on your way somewhere, you will not be spared. If you want to join in, it can be a huge amount of fun but if you genuinely have things to do, Songkran can tire quickly. While the Thais seem to keep it all in perspective as a bit of fun, some farangs seem to go totally over board and do their best to ruin it for everyone. Songkran is very much a case of love it or hate it. Sadly, I am not a fan – nor are many of my friends. The Songkran holiday is 13, 14 and 15 April, the very hottest time of the year – although many businesses will close for a lot longer than this. 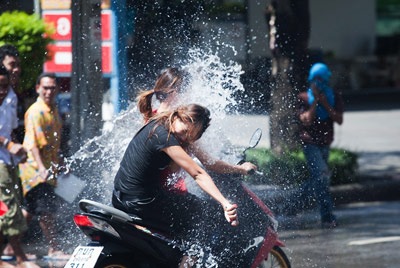 HM The King's Birthday, December 5th, is perhaps the most important holiday of all in the Thai calendar. Every year, hundreds of thousands of patriotic Thais head to Sanam Luang, the big park next to the Grand Palace to pay tribute to HM The King where a big festival is held and the Prime Minister of the day and other dignitaries come and pay their respects. With the Thais' love and adulation of HM The King, this is a gathering charged with pride and patriotism. It is one of the few days of the year when a lot of businesses are prohibited from opening, particularly nightlife venues and those places whose principle business concerns the sale of alcohol. There are quite a few other holidays, particularly some of the Buddhist holidays when nightlife venues, discos and the like also close.

Over the past few years, bars and night spots have been forced to close on pubic holidays, particularly the religious occasions and even stores like 7 Eleven are prohibited from selling alcohol.