Living and Working in Bangkok Must See Attractions

Wherever I read information requests about Bangkok online, many people ask what the 'must see' attractions are in Bangkok. Bangkok doesn't really have that many must see attractions. This is a city that you visit to experience the energy, heartbeat and vibrancy, rather than the individual attractions. It really is a bit of a 'good time city' as Richard says at the start of the movie, "The Beach", a place where people come to have and partake in the fun, as opposed to see the sights. Nonetheless, most people want to see a Thai temple or two, so…

Wat Phra Kaew / Wat Po – these are two of the most impressive wats (temples) in Bangkok and no trip to Bangkok would be complete without visiting one, if not both. These two Bangkok landmarks are conveniently located right next to each other. For those on a really tight budget, the Wat Po entry fee is 20 baht, Wat Phra Kaew is 200 baht (but both are free for Thais irrespective of whether they are Buddhist or not!). Both of these temples are located in the old part of the city and are next to the Chao Phya River.

Going for a river cruise is also a nice way to see some of the older parts of Bangkok, and experience a way of life that is slowly dying out. Get on board the Chao Phya Express boats that go up and down the river. While they can be a little crowded, it moves at a leisurely pace and you get to see so much of the city. The fare is awfully cheap with the maximum fare to go to the end of the line something like a paltry 15 baht. If you see somewhere that you like the look of, just jump off! There is a pier very close to Wat Po. Also, note that some of the biggest pests in the country, 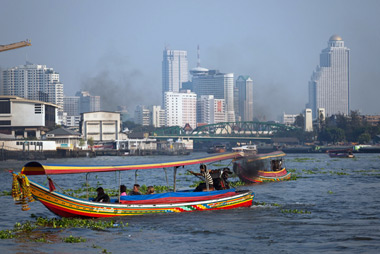 scam artists, hang around these two marvellous temples and may tell foreign tourists that the temples are closed due to one or other silly reasons and that they can instead offer to take you somewhere else – which will be followed by a high pressure sell. Do not listen to these people and most definitely do not go anywhere with them!

Jim Thompson's House – Located in Soi Kasemsan 2, not far from the National Stadium BTS Station, this is a traditional old Thai house in the heart of Bangkok that is shrouded in the mystery of the disappearance of one of the city's first and most famous Western residents. Just 100 baht to get in which includes a tour of the house, it is well worth checking out.

Baiyoke 2 Tower – I'm a sucker for tall buildings and this one is the tallest in the Kingdom. At 150 baht to go up to the observation deck, it is not overpriced like most of the other tall buildings around the world. The view from the top gives you a good idea of the shape and sprawl of the city. It is nice to go up just before sunset because you get to see the city during the day, at sunset and also in the evening. Unlike the West, there isn't a real twilight in Bangkok and the sun drops very fast in the sky, meaning that you do not have to stay up there a long time to see it under different light.

Bangkok is located pretty much in the centre of the country and there are many places nearby where you can escape for a weekend away or even a day trip. Some of the more popular places to go to for a short break include Ayuthaya, the old capital which has some impressive temple ruins, Kanchanaburi with it's national parks and waterfalls (see left), and Pattaya with it's beach, great seafood and its famed naughty nightlife. All of these places can be reached in about 2 hours. Hua Hin, less than 4 hours by bus from Bangkok is far better than Pattaya if you want to go to a pleasant, relaxing beach resort. Ko Samet, on the eastern seaboard, just a bit further along from Rayong, is another nice place for a weekend away and has some of the best beaches in Thailand. For more information on some of these places, check out the section on Travel in Thailand.