There was a time when I used to frequent the big hotel buffets, when Bourbon Street’s Tuesday night Mexican spread was a weekly visit, all of which was a time when I was at least several kilos heavier than I am today. These days I am much more circumspect when it comes to buffets and after swearing myself off them, I do indulge from time to time, seeing them as a treat and not a regular thing.

After a great dinner at Senor Pico’s in the Rembrandt Hotel in Sukhumvit soi 18, we couldn’t help but notice the ad in the hotel lift for the Sunday brunch buffet at the hotel’s Indian restaurant. Rang Mahal has been voted the best Indian restaurant in Bangkok numerous times so a mental note was made. The other half needed convincing for few Thais really have a taste for Indian food, but when I told her it was widely regarded as the very best fine dining Indian restaurant in the country and it would be a great chance to get some photos to post on Facebook, she became interested! 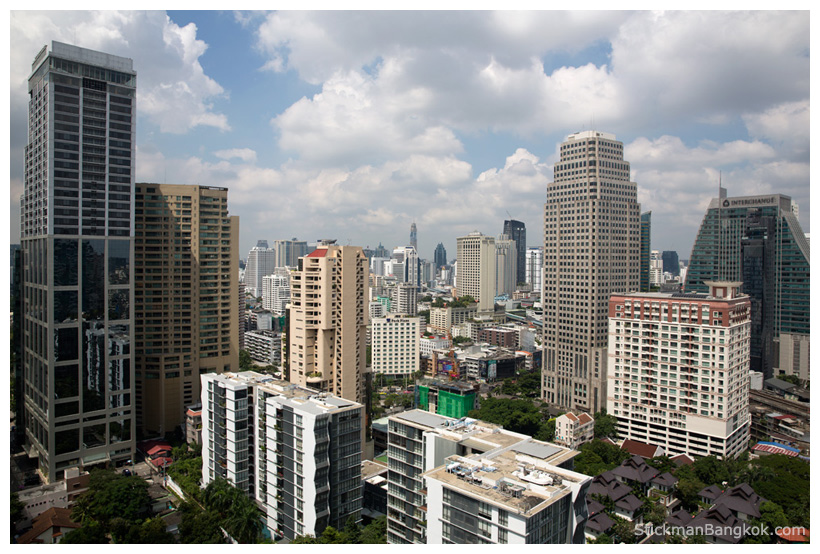 The first thing that strikes you about Rang Mahal is the impressive view. Up on the 26th floor, the restaurant looks out to the west, over Asoke, towards Nana and beyond.

The decor takes us back to an era before mobile phones, when eating out was a night out and when waiters were professionals. And so it is at Rang Mahal, a spacious restaurant with friendly yet efficient service from immaculately dressed staff in plush surroundings. This is a restaurant that once seated in you’re in no hurry to leave.

For the Sunday buffet reservations are recommended and we did just that, the reward being a window table with a great view. 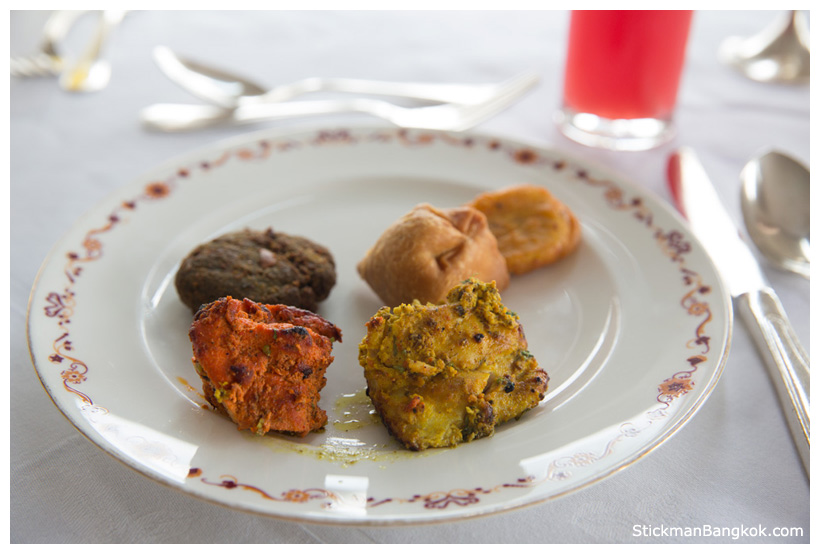 Many ethnic buffets in Thailand have not only the featured food, but feel a need to satisfy the local market with a number of Thai dishes. Rang Mahal shirks this trend and is an all Indian affair. The only sign of non-Indian food is a small salad section but that aside, this is a true Indian buffet.

To begin, I selected large pieces of chicken Tikka and fish Tikka, a samosa and a couple of other interesting Indian-style appetisers, the names of which I don’t know. The Tikka chicken and fish exuded a morishness that made you crave more – no big deal at a buffet for there was a huge tray of each just waiting at the other end of the dining room! 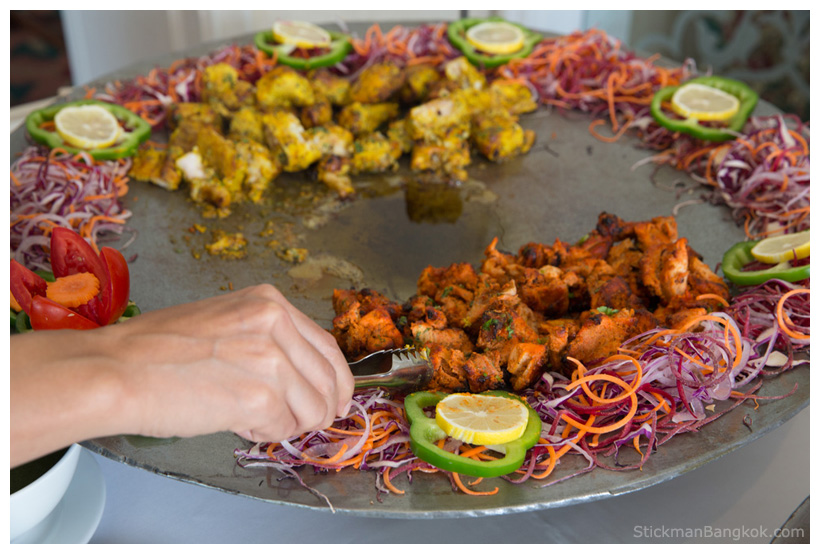 The Tikka was truly outstanding and I couldn’t help myself and returned for another round.

The buffet features far too many dishes to list and runs the full gamut of Indian food. There are poppadoms and dips, a couple of soups, samosas and various other appetisers. A variety of nan breads proved to be one of the most popular items. There’s the aforementioned tray full of Tikka baked chicken and fish. There were close to a dozen curries, both vegetarian and non-veg, a variety of rice dishes and an extensive selection of Indian sweets, desserts, sorbets and fruit. Fresh watermelon, pineapple and orange juice were part of the buffet; water did not appear to be.

The selection of dishes was extensive and it did not seem possible that one could sample everything. 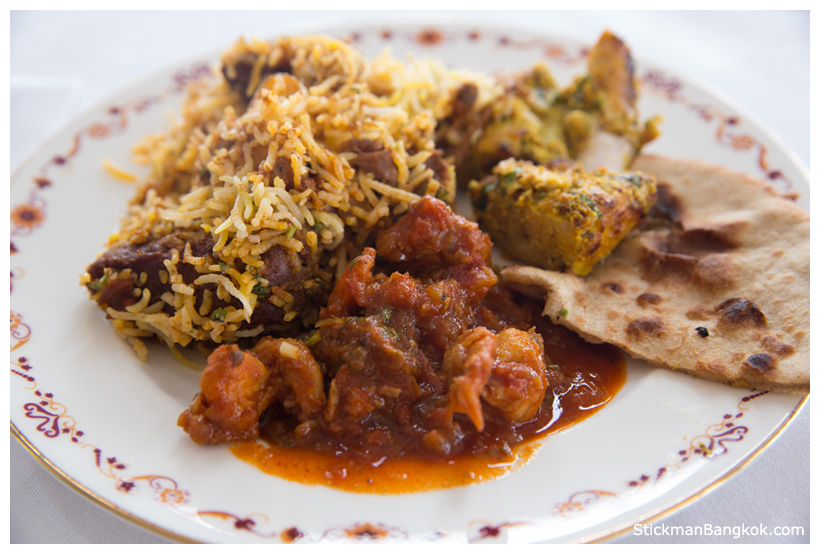 I always figure that after a small starter or salad that the next plate at the buffet should be your main, where you select the dishes you enjoy the most – eat what you enjoy most before you start to fill up.

The Tikka fish was so good that I could not resist a few more pieces. There was a tasty looking tomato prawn curry and a nice piece of nan bread helped mop that up.

What I was really looking forward to was the lamb biryani. The picture above is deceptive and does not show the mound of lamb and rice that I heaped on the plate. The rice was light and the pieces of lamb large and tender. The spices were subtle and the mix of tender lamb with subtly spiced yellow rice and an assortment of vegetables was a quite delightful mix. I’d been looking for a good biryani for weeks and my journey took me to the most famous Indian restaurant in Bangkok before I found it. 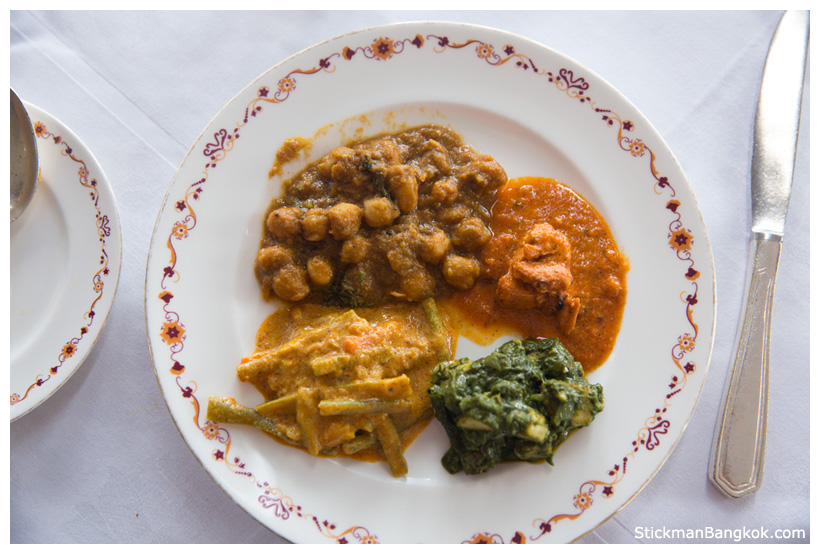 After the main plate I was feeling quite full and we just sat back and took in the view for a good 40 minutes before going for the next round. Truth be told, I was already full, but surrounded by this wonderful Indian food to sample with many dishes I’d never tried I was hardly going to call for the checkbin just yet, was I?

The next round was 4 curries. I chose to forego rice so as not to fill myself up.

The spinach and cheese had a texture that was not really to my taste. That’s not to say it was bad – it wasn’t – it just wasn’t to my personal taste. The other 3 dishes, a mixed vegetable curry, a chicken curry and a dal were as good as any curry dishes I’ve had. 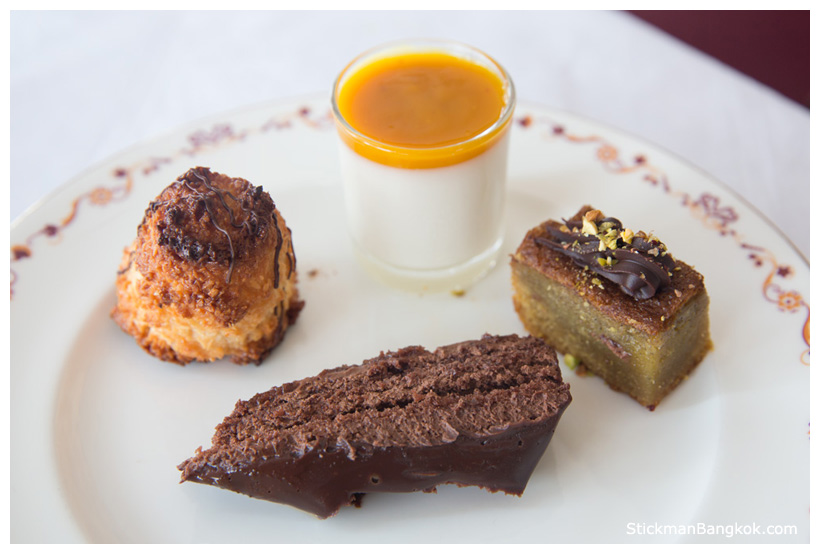 Indian desserts can be sickly sweet and 1 or 2 small pieces is usually more than often enough.

The 4 pieces I chose were probably sweet enough to make a diabetic’s blood sugar level soar just by looking at them! All 4 were quite lovely, but the pistachio cake (on the right) deserves a special mention. The combination of the gooey texture, the pistachio nuts and the chocolate on top were a perfect mix. I was craving another slice but commonsense prevailed and that can wait until my next visit.

After enjoying the view and listening to the other half tell me who the hi-so Thais present were (and how that verifies that this restaurant must be good), the final plate was light, a few pieces of fruit. There was a raspberry sorbet along with a mango sorbet which looked appealing, but I long ago learned that overdoing it at a buffet can cause discomfort for the rest of the day and as difficult it was I refrained from eating any more.

My dear, I said to her, you’ve already agreed with me that we’ve just had food from heaven.

She looked at me, wondering what I was going to say next.

This food really does come from heaven, I explained, and it is the top floor of the hotel that is closest to heaven so that is where it’s served.

She gives me a playful punch, smiles, and asks me when we can come again.

For a Thai to enjoy Indian should say just how good Rang Mahal is. Only one word describes the food at Rang Mahal, heavenly!

Rang Mahal has probably the best Indian food I’ve ever had. The surroundings are fitting for the premier restaurant in a high-end hotel and the service matches the food. The Sunday brunch runs from 11:00 AM until 2:30 PM and is priced at a very reasonable 850 baht net per head.

Next in Stickman’s Reviews