For foreigners resident in Thailand, there are so many festivals on the calendar, some local, some regional and some national, that many simply aren’t understood. As such it can be difficult to really get in to a festival when you don’t understand the reasons why it takes place and what its significance today may be.

But there is one festival that seems to be universally enjoyed by foreign residents and visitors to the country, and that is Loy Kratong. 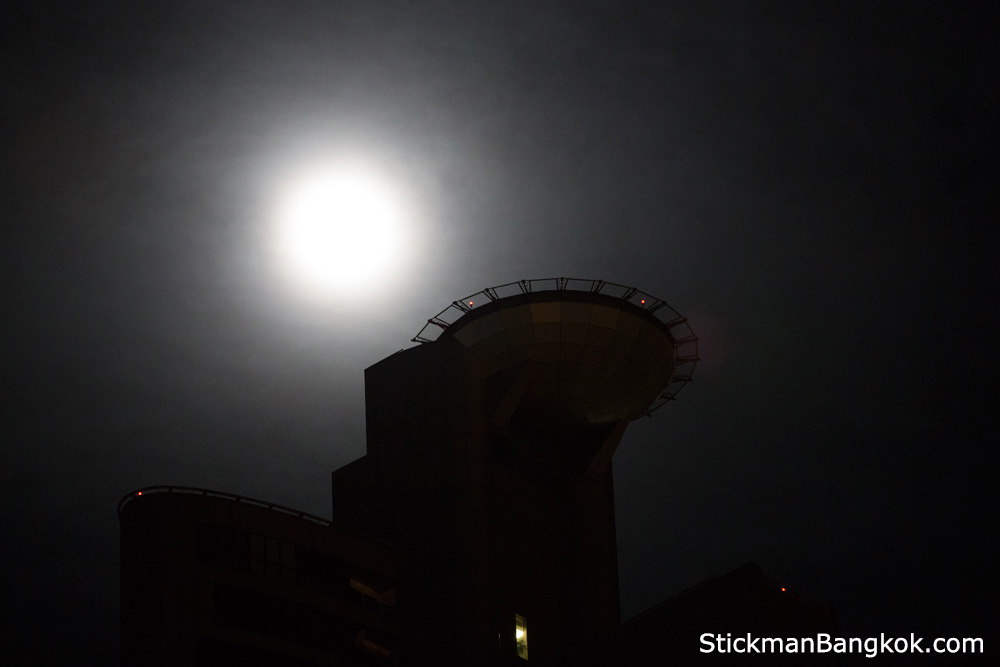 Loy Kratong takes place on the night of full moon on the 12th month of the Thai lunar calendar which usually means some time in November, occasionally late October. 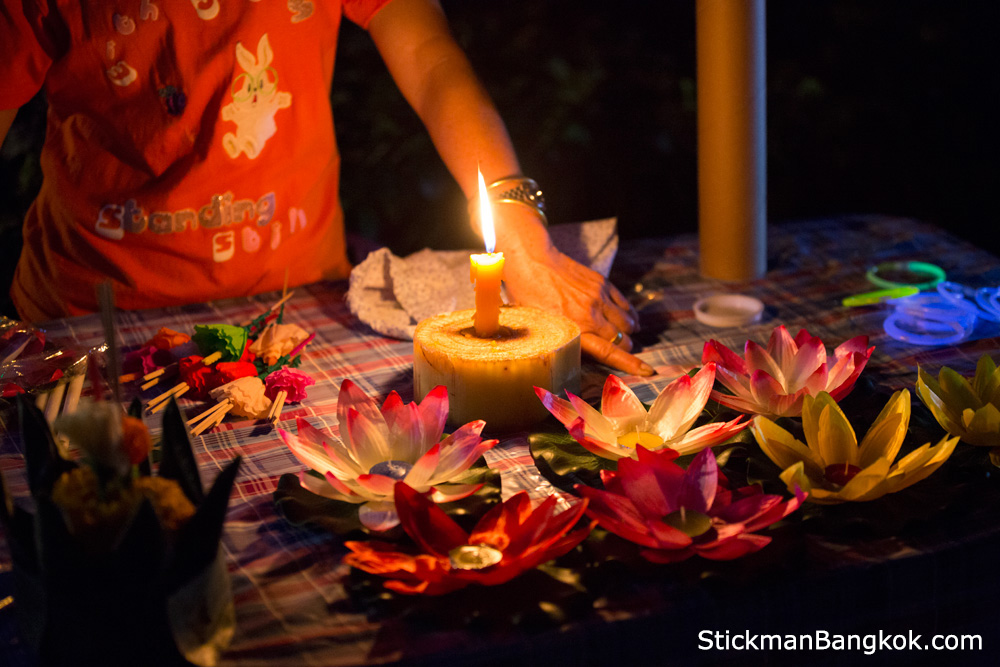 The word loy translates as float and a kratong is like a basket made of natural materials so Loy Kratong means the floating of a basket.

On the day of the Loy Kratong festival, the small kratongs are sold by vendors who set up tables near rivers, canals, lakes and waterways. Most go for a very reasonable 50 – 100 baht, or of course you can make your own as many school students do. 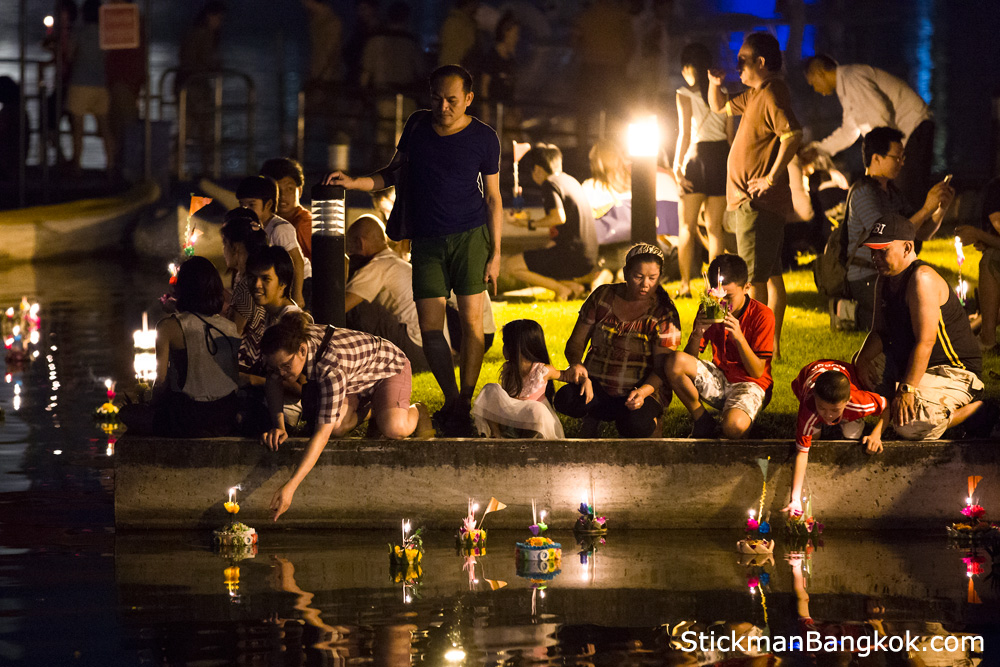 The kratongs are taken to the water floated in what is a gesture of apologising to the river for the abuse of it over the past year, paying respect to it and thanking it for all the benefits it brings. 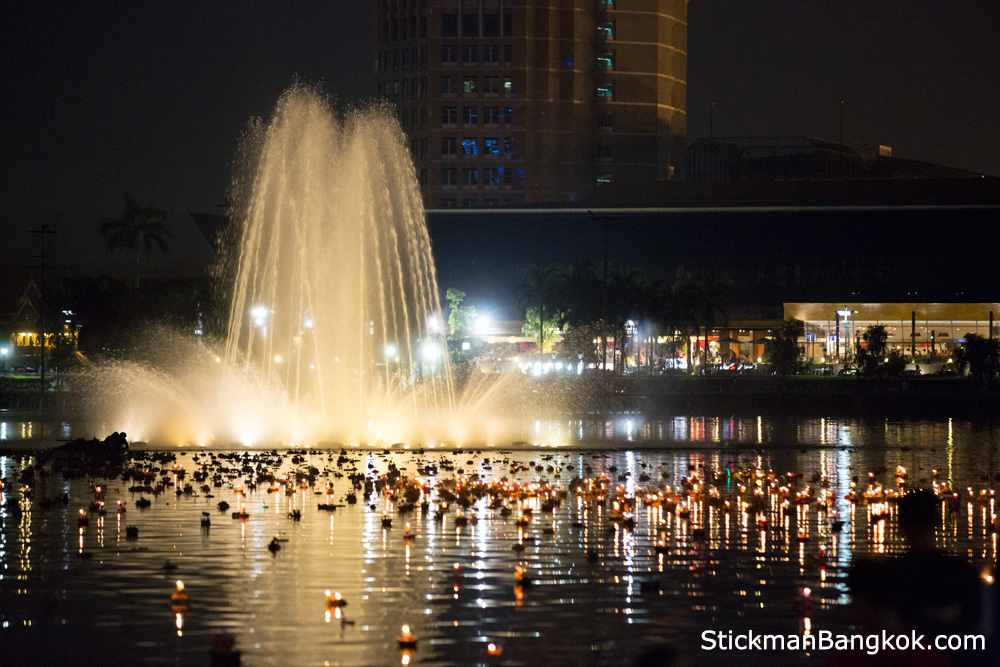 Thousands, perhaps of tens of thousands of kratongs are floated in the waterways that draw the most people. In Bangkok that would be the Chao Praya River but everywhere with water from the Saen Saeb Canal to the Prakanong Canal to Lumpini Park to Benjasiri Park next to the Emporium to Benjakit Park just down from Asoke where these photos were taken attracts throngs of people.

If you don’t like crowds, don’t go near any waterways on the night of Loy Kratong! 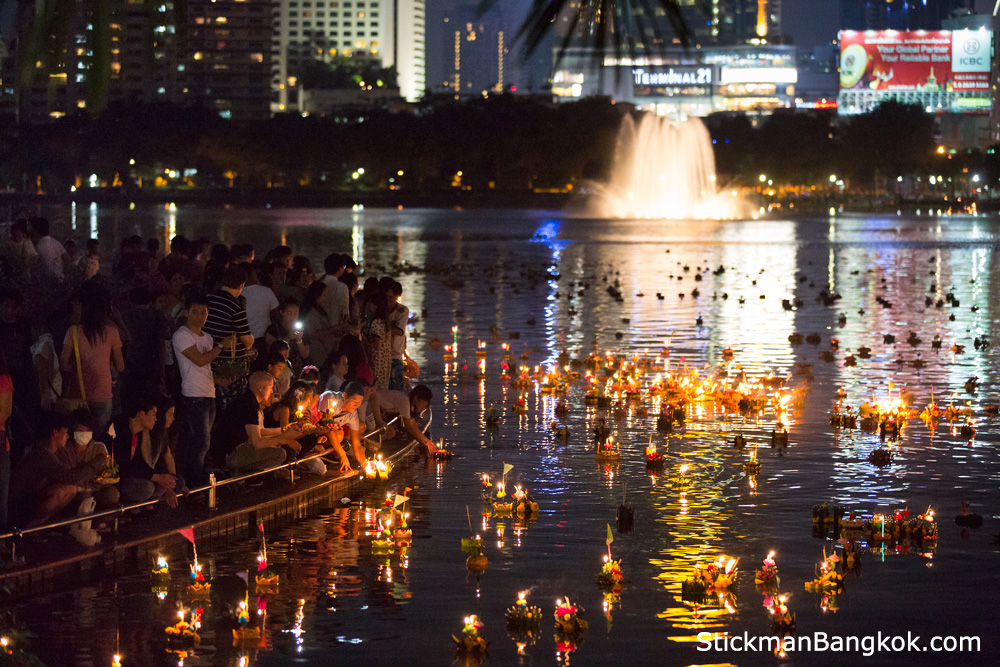 Space at the man-made lake at Benjakit Park is at a premium. Once the kratong is floated away, people move back to allow others to float theirs. It’s only early evening but already the lake seems to be full of kratongs.

Superstitious young Thai couples may float two kratongs together at the same time. They believe that if the kratongs float out together then they will stay together as a couple. If, however, they drift apart… 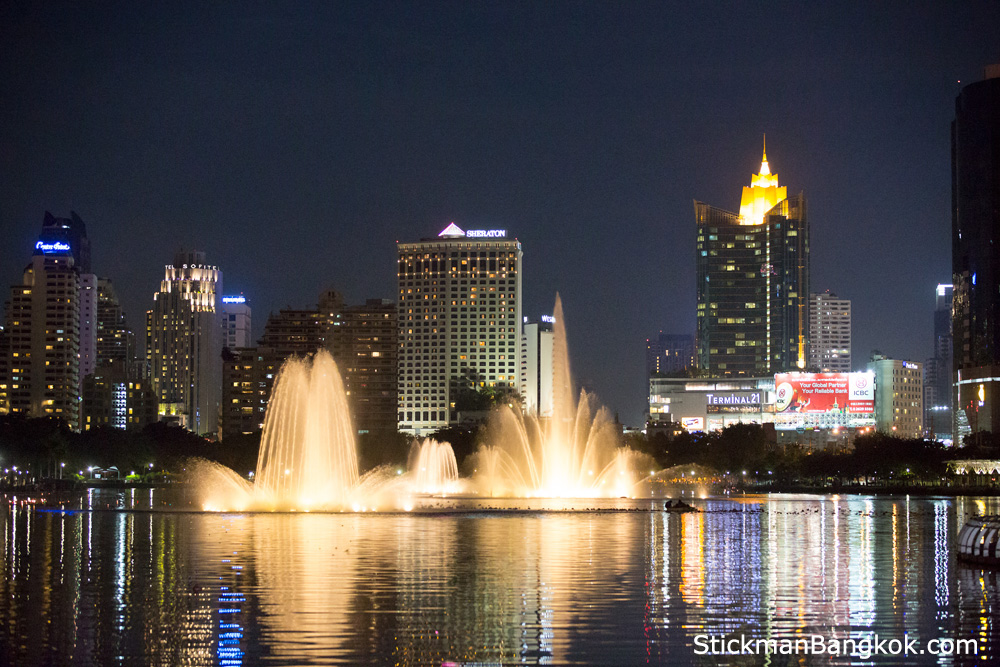 Loy Kratong night is perhaps the biggest night of the year for young Thai couples, I guess kind of like the equivalent of prom night in the US. Restaurants fill up and there can be queues at the curtain hotels found all over the city as young couples find somewhere to go in what might be their first time together.

It is said that more Thai girls lose their virginity on Loy Kratong night than any other night of the year which is seen as a problem by many elders and social conservatives. Some hotels have police keeping an eye on those using the premises and some may even refuse entry to those of legal age if they are unmarried. Some conservative taxi drivers may not even be willing to give a ride to young couples who request to be taken to a hotel. 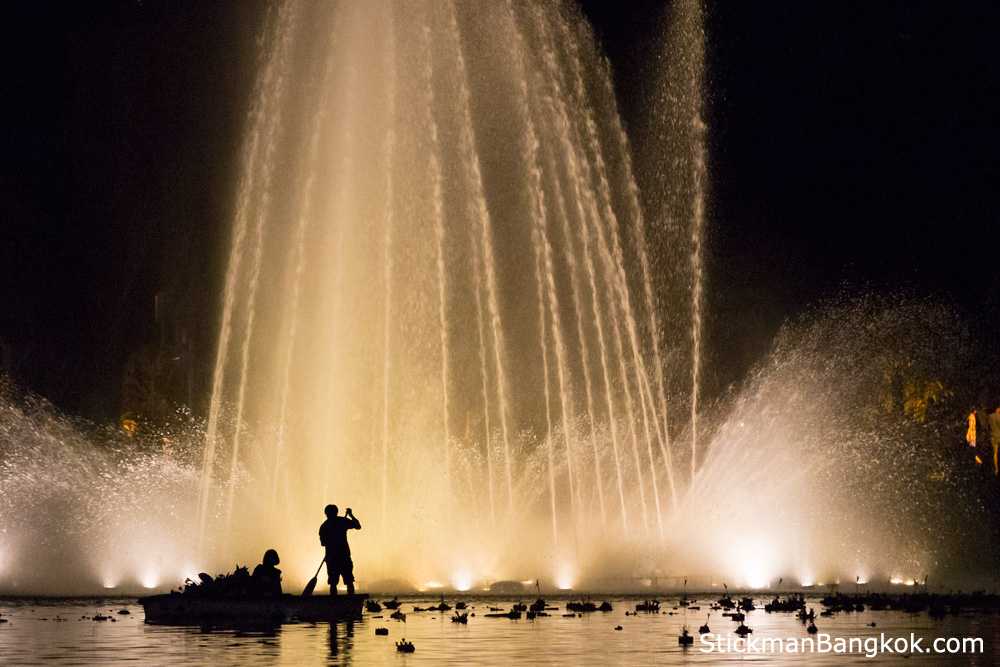 Many of the kratongs contain money, usually small coins, in a gesture that is similar to the throwing of coins in to a wishing well in the hope of benefiting in some way later. 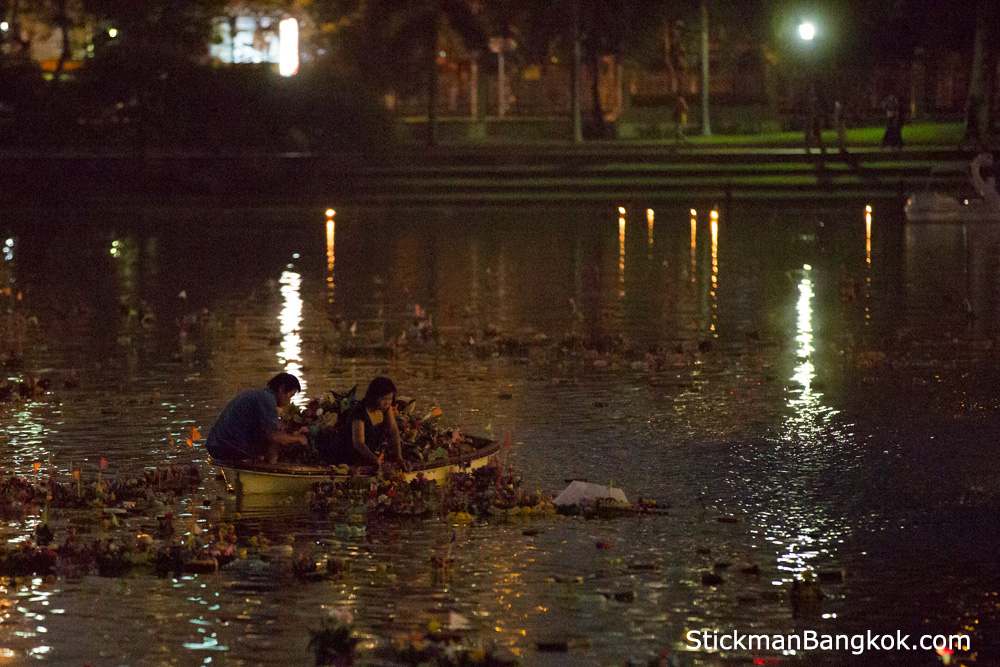 If you have ever wondered what happens to the kratongs (and all the coins placed in them), this photo and the one above demonstrate that clearly! A middle-aged Thai couple have filled their boat with kratongs they have collected. Now whether they are doing this to keep the lake clean or whether they are going through them for the coins – or both – I wouldn’t know! 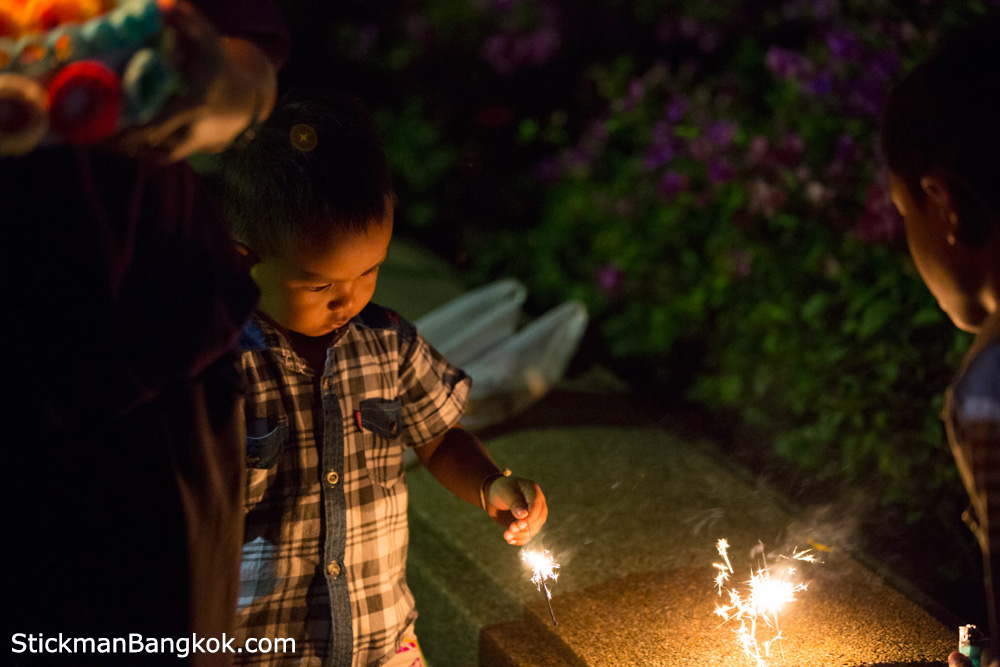 Loy Kratong really is a charming festival which is not just for couples and lovers, but for the whole family to enjoy!