It was no surprise that I didn’t wake up till nine thirty this morning; an unusual occurrence for me and not a good day to do it as I had a meeting at nine am. Panic stations as I phoned Roger and humbly apologised. ‘Don’t worry it’s no problem I’m here anyway. Just come over when you are ready.’ Roger is a Scandinavian who came on holiday to Thailand at the age of twenty one and never went home. He’s now about fifty, a property developer and speaks excellent conversational Thai. Well, I think he does! I was looking at the possibility of renting an apartment as an alternative to where I was staying but it appeared not to be so easy as most apartment owners want holiday let rentals which can make it a bit on the expensive side. Any how it was worth exploring and Roger was very helpful, showing me a few very nice places to give me an idea.

I met Dave today who is also in the property game. Dave fell in love with Thailand many years ago when he auditioned for a singing part in the famous musical ‘The King and I” starring Yul Brynner and Deborough Kerr. Yul Brynner made baldness fashionable before Tele Savalas and me. Dave told me that he was also in the West End stage production of the musical. Originally from London he had been visiting for 23 years. He was now 65 and lived here in Phuket permanently. To describe Dave as a small man would be too simple. Very short and pencil thin; there is probably more meat on a gypsy’s whippet and if he weighs in at 40kgs he’s had a big night out, I think, describes him to a tee. A very chatty man, always willing to help he gave me some very useful information. I was surprised to find that he was never a jockey; he was probably too small!

I must say, kind as he is, that Dave didn’t show me too much of interest property wise. The idea of struggling down rutted country lanes full of holes didn’t really appeal so we called it a day and I got back to the desk for a few hours. We did help someone in distress though which always makes one feel good. An English holiday maker stuck down a lane in a clapped out VW beetle with his head under the bonnet; at the back of course.

‘Looks like he may need some help’ says Dave.

‘What’s the problem mate?’ said I.

‘I Know how you feel’ I said, without thinking.

Any way we got him to a garage and left him to his own devices after that.

There’s no sign of rain today so I felt safe visiting Taew, Yo-yo and Wah-Wah. After a couple of glasses of the Italian plonk Wah-Wah asked me if I want food.

‘What do you think I should have?’

‘Won’t I be poisoned?’ (How could she possibly understand that James???)

What a fantastic morning. I’m up and at ‘em; it didn’t rain last night, and I was soon on Kata Noi beach walking and swimming. I have to take some more photos for Kevin so I took the camera and headed straight for the little stick house in the rocks I found on Tuesday. Do you remember, when they asked me in for food? I took some great photos of them and their baby sea hawk. 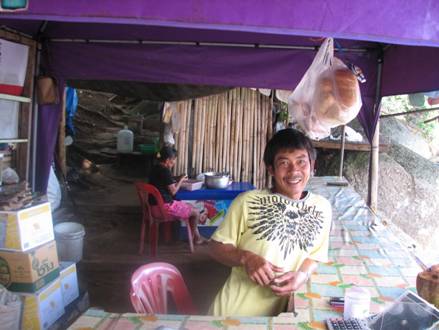 
Today at my desk was not invigorating but an afternoon looking at real estate with Su was a real pleasure. A mere slip of a girl but very professional as well as charming; I think she would have driven me round all night but it is Friday and I’m sure she would like to wind down for the weekend.

I go to what they call ‘the groovy end of the island’ when I can. That’s deep south at Rawai which is for some a way of life. You can’t swim there but the view from the sea wall is superb looking across to the many islands dotted around the Andaman sea close by. Locals eat at the concrete tables along the promenade, especially on Sundays, and the many restaurants that line the sea front are always bustling with activity. Sea Gypsies live in a fishing village at one end of the beach manning all sorts of food stalls and others selling local produce and shell jewellery.

There’s quite a bohemian atmosphere to this area and Nai Harn which is close by and a real favourite place for me, is very different to the other beaches around. It’s very laid back and close by is Yannui, a small, quiet sandy cove totally undeveloped. There are delightful spots everywhere; some quite difficult to get to. There’s often a fresher breeze here coming off the sea which brings some respite from the heat and humidity. Many expats live in this area away from the crowds of Patong. 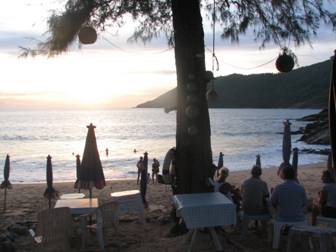 
Tonight I am a mobile customer in a busy little place which always offers good value. I say mobile because no sooner am I seated than my table is required by a group of tourists who need to all sit together. Not wishing to be difficult I let them have my table and am nicely moved to a table outside with an overhead fan which blows my hair and everything on the table everywhere. At least it’s nice and cool.

Kuay Tiew Nam – Soup with noodles and chicken for me with spring rolls to start. A glass or two of that well-travelled Italian Verdicchio vino bianco plonco and I’m felling quite good. Whilst awaiting my meal I browse through the menu. A very interesting dish catches my eye. ‘Pork Gordon Blue’!!! Yes, that’s right. ‘Pork Gordon Blue’!!! If you are ever bored here just read a menu. I’m sure the ‘Cordon Bleu’ French chef who invented the dish would be delighted to know that it has now been re-invented by an Aussie. If this is a great source of entertainment for people like me imagine what it must be like for an Asian person reading a European’s attempt at a Thai menu. Our language is just as difficult for them to learn as theirs is for us and I believe they make a much better job of it than we do. Oh dear, I think they put too many people together using my table inside and one of the ladies has passed out. There’s a crowd around her and not much I can do so I’ll eat. At least she’s still breathing.

Not All Thai Girls Are Poor