EPISODE SEVENTEEN – SO THAT’S HOW YOU USE AN ATM

I am quite surprised to find that I have not been admitted to hospital with some rare tropical ‘fuel’ poisoning. Actually I feel remarkably well which in itself is
a shock to the system. Maybe I will see them again. On second thoughts; maybe not. No; probably not!

I am still plagued by the Diners Card and the inability to draw cash from an ATM. I learned today, from Cape Town that because I tried to withdraw cash too early, without realising it, my card has now been invalidated at ATM’s.
Now, how on earth was I supposed to know that, firstly that it was too early and secondly that it would be invalidated, unless someone told me. I can’t begin to tell you how impressed I am with the wonderful service Diners Club give
to their valued customers all over the world. This continuing frustration is followed closely by another revelation concerning the banking world. The ATM won’t let me draw cash from my Visa Gold Card either. If I had any hair left to
tear out it would all be gone by now. Do I need to explain further? As I was standing outside a bank, with all this going through my head, I decided to go in and ask for some advice. That was a big mistake!

The very pleasant customer consultant, I think that’s what they call them these days, was listening intently to my story when we were interrupted by another customer. He evidently considered himself to be very knowledgeable on
banking as he proceeded to give me an unsolicited and lengthy tutorial on international banking. I could not resist asking if he was the ‘head honcho’ of the Bank but, although I was pleased to hear that he was not, my enquiry
was not about to stop him talking. The consultant, who was trying to help me, was now no longer to be seen and I can’t say I blamed her. The leading role in this farce had now been unilaterally assumed by yours truly whilst I had become
an extra. The self-appointed star, who believed fervently that he was providing a uniquely valuable, and hopefully free, consultancy service to a dim-witted Pom, had now involved everyone within earshot. Waiting in the wings for my cue I could
see him seeking the assistance of his mate and his, quite attractive, Thai wife or girlfriend. I didn’t have time to establish his nationality or the precise details of their relationship but I did notice that quite a few customers
had left the Bank without completing their transactions.

The change in the script left me adlibbing and frantically trying to plan my escape without appearing to be rude or ungrateful. I could think of a few excuses and diarrhoea seemed the best believable option, considering we were in Thailand
with its heat and spicy food. Apart from that it would not be too pleasant for those close at hand if I didn’t make the loo in time. But I didn’t get a chance to speak before he said, ‘The consultant will probably take
you to the ATM and ask you to insert your PIN’.

‘Wow. Is that what you do?’ I exclaimed, wanting painfully to reveal that that was what I had been trying to do for the past two weeks in Bangkok. And I dearly wanted to follow up with; ‘I might as well insert my
dick for all the good it’s done me.’

I knew instantly that I had said the wrong thing anyway and that it would have been much wiser to avoid sarcasm or misplaced witty repartee. But I just can’t keep my trap shut when I’m confronted by such a wanker.

‘Unless I make a move soon he is going to continue to subject me to this torturous lecture on ATMs for god knows how long, the threat of diarrhoea is becoming a reality and I dare not fart! I’m off’.

I scooted out of the door, none too pleased that I had wasted so long this morning being lectured in the bank by such a crassly moronic dickhead; I had things to do.

I received some very positive feedback today from manufacturers I met on my Bangkok business trip. I must say that the overall reception to our project has been most encouraging and it has given me a firm belief that given time and patience
it will be most successful. I have a bad habit of getting a little impatient when I don’t get a response for some time and I am particularly bad when I get vague responses. I have no problem at all with people not wanting to partner
with us. They all have their reasons, which I respect, but I do like to know what they are. Even though they are not obliged to tell me it is valuable information for us going forward. I have learnt so much of benefit in the past month and
am sure that I will learn more in the months to come. Having Suda’s support and help in Bangkok, albeit part-time, is very comforting to me and is as yet unquantifiable in terms of real value.

On my way out this evening I was treated to a taste of Pueng’s evening meal. Unable to speak or draw breath for several seconds due to lashings of chilli I thanked her politely and went on my way to a cooler Thai food experience.
Actually, I just visited Taew for a therapeutic foot massage and then popped over the road to O’Tools which is supposed to be an Irish pub but apart from green everywhere it bears little resemblance. I have a long chat with the waitress,
Wah Wah, a very attractive woman of thirty five who could easily pass for twenty three. I don’t know how they do it. I’m sixty five looking and feeling like ninety some days. Maybe it’s the slim figure and very short skirt
or should I start using my glasses again? She plied me with dry white imported Verdicchio vino bianco plonco which possibly has some alcohol in it but you’d never know if you drink as little as I do. I was a little hungry so she trotted
off down the road to a little food place and brought me some delicious soup with chicken and steamed rice. Wah Wah has two jobs. In the day she works at Lovely Massage with Taew and in the evening crosses the road to O’Tool’s.
She supports her young son who lives with her mother and occasionally she sleeps and runs on the beach. (Separate events!)

I was about to go home but it was raining ‘cats and dogs’, elephants, tigers and a few other things as well, I think. Taew arrived and so did the quite eccentric owner of O’Tool’s, Yo-yo. I think she’s
called Yo-yo because she bounces around all the time, smokes like a chimney and drinks like a fish. ‘I’m not sure if I will get out of here tonight; never mind.’ O’Tool’s has a computerised music system with
about 4000 tracks which I was trying to fathom out how to work when Yo-yo showed me. It wasn’t long before we were ‘lockin and lollin” and the ‘lain’ was ‘tollential’.

I knew I should have hired an amphibious motor-cycle! 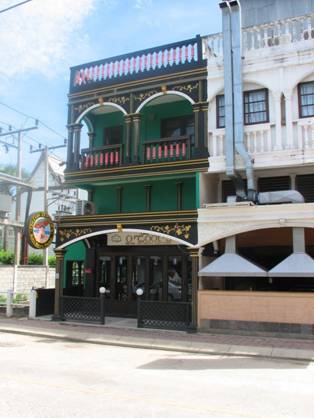 Why Western Men Fall in Love With Thai Girls