Travelling from Peleliu back to Palau’s main island and its capital Koror I take the official state boat rather than the speed boat that had transferred me over a couple of days earlier. Even though it takes three times as long I enjoy the journey far more as one has a so much better chance to enjoy the stunning scenery along the way.

Sitting on the upper deck of the boat I share a bench with two young local girls. The chattier one of them keeps smiling at me curiously while her friend appears to be rather shy.

“ I’m Mysty, and her name is Madonna!” she says, pointing a finger at her shy friend.

Madonna first rolls and then averts her eyes.

“ So what are you going to Koror for?” I address Mysty.

At first sight I believed Madonna and her friend are in their mid-teens, but as they already go to college I figure they must be at least 18 years or older already. Pretty Mysty is dressed in tight jeans and a t-shirt. Madonna wears a long skirt, a plain-colored blouse, and a flower behind her left ear. Both wear their black hair combed back, revealing attractive features.

“ Over there, the big guy, that’s our friend Fluffy Larry!”

Fluffy Larry waves at me. His name is fitting. He’s a big and chubby Palauan guy with curly black hair. He wears a loose black T-shirt with print that reads “Hot as Hades, Fort Hood 5k Run” on the front. On the back there’s a large print of an American Abrams tank and more letters that spell out: “A moment in III Corps history, 2 Aug 90, Saudi Arabia, Desert Storm, Desert Shield”. 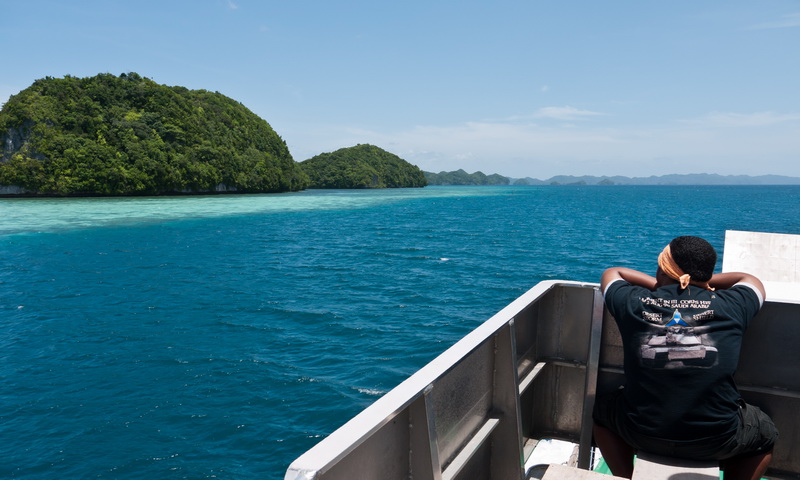 Mysty and Madonna have boarded the ship with a bunch of provisions. There is a plastic box filled with some sort of fried rice and shredded spam, and a few plastic bags full of fruits. Soon after the boat had left the dock the girls started spooning rice into their mouths from the plastic boxes, and later opening the plastic bags and cutting fruits into little mouth-fitting bits and pieces. Some bits they throw over the railing and into the sea.

“That piece no good!” Mysty says and points at the spot where the piece of fruit hit the water and sunk. “You want Palauan apple?” She hands me a small slice of the familiar looking fruit.

“In Thailand they call this Chompoo!” I tell her. “There people like to dip this fruit into a mix of sugar and chili before eating. It’s quite good, perhaps you should try!”

Mysty looks mystified. “With chili?” she repeats after me incredulously. “We have this!”

She shows me a plastic cup full of reddish paste that I hadn’t noticed before. “Should I put it on for you?”

I put the piece of fruit into my mouth. The flavor is a concoction of salty, sweet, strangely synthetic, and goes down with a fizzy aftertaste. It tastes weird in a funny yet not unpleasant way.

“Any chili?” I ask. “What else would make it turn so red in color?”

“That’s Koooleeeh!” Mysty informs me in a matter-of-fact voice.

“Kooleh? Is that some kind of a plant?”

Mysty and Madonna erupt in laughter.

“How do you spell that?”

Hence I learn that the secret ingredient to this traditional recipe is the powder of synthetic instant lemonade that doesn’t only require water to get transformed into a barely potable substance, but also copious amounts of sugar. Now it’s my turn to laugh.

“What flavor then?” I want to know.

“Why, tropical of course!”

As the boat slowly maneuvers its way through the many shallow coral banks Peleliu becomes smaller and smaller in our wake. Sometimes the captain’s arm comes shooting out of the window and points at a shadow under the surface of the water. Sharks! There are many around these islands. Some members of the crew have lowered fishing lines into the water, hoping that something will bite. And it does! After only twenty minutes a couple of sizeable fish are lying on deck, wriggling in their death throes.

“Where you from?” Mysty asks. “In your country do you have marijuana?”

“Yes we do, but it doesn’t grow in the open. The climate doesn’t allow for that.”

“On Peleliu, we have loooooots of it, and huuuuge! It grows everywhere!” Mysty says proudly. “You want?”

A joint appears out of nowhere. I politely decline. Mysty looks at me funny, and lights up. The salty air in the lagoon mixes with the scent of weed. The boat sways gently in the waves as the joint gets passed around between Mysty, Madonna, and Fluffy Larry.

“No! Lawyer!” Madonna sneers back. Mysty laughs and draws from the joint in her hand.

“So why you came to Palau?” they direct a question back at me.

“I heard it is beautiful, and I like Pacific island nations a lot. I’ve been to quite a few. Also, many people, me included, enjoy seeing scenery different to the one they are familiar with!”

“Oh. But where is your wife, your kids?”

Mysty nods and gives me two thumbs up. I’m not sure if she means it. With her free hand she digs into her handbag and pulls out a small plastic bag.

I’m running out of good excuses. Watching the otherworldly beautiful scenery slowly pass before my eyes I soak in the deliciously salty ocean air, listen to the monotonous hum of the diesel engine, and relax with the rhythm of the waves that rock the boat ever so gently. This is all the drugs I need to make me happy.

Short before reaching the dock in Koror someone pinches my shoulder and I snap out of my hypnosis.

Mysty drops some M+M’s into my right hand. Now that’s more like it! 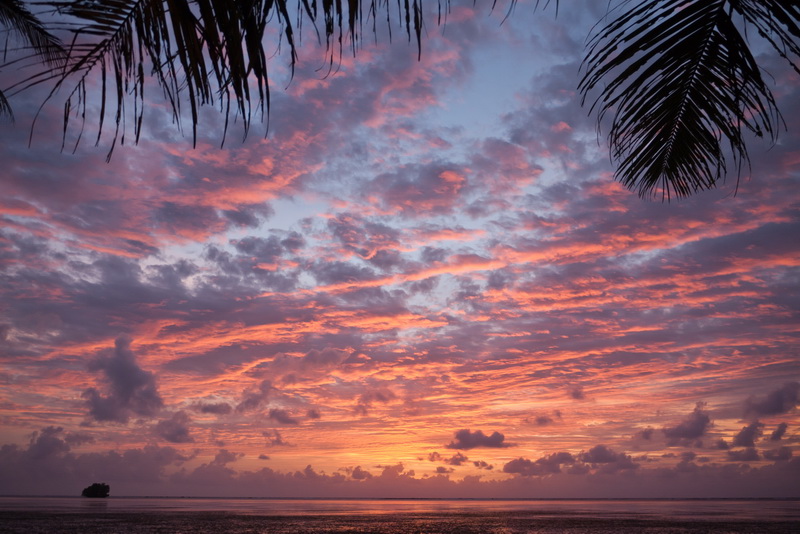 For yet another story with lots of pictures from Palau check out this link:

A most interesting report!

You sure have a most interesting life and see some incredibly interesting places. There's few people who have a lifestyle that I am truly envious of – but you would be one of them!

The Mysterious Second World Of Thailand

A Matter Of Respect