Urbanization of a Karen Part II

The continuing growth of the tremendously hard working and trustworthy little Karen girl Vek or hereafter referred to by her real name LEK has been a rewarding saga. If you read my first submission, you know that Lek was working as a laborer for the construction
crew that built our housing complex. She had been working the labor crew during the day and worked her way in to tending a few of our gardens in the late afternoon/evening. She began to see that her days with the labor crew at this location were
ending soon as the site was almost completed. She would have to move soon in order to seek employment elsewhere. 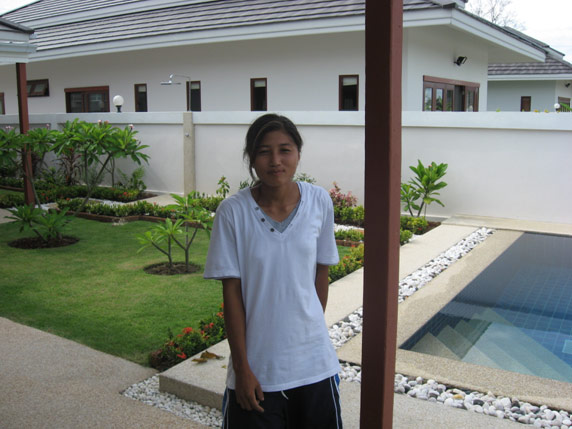 Two of us did not want to lose her so a concerted effort was made to find her enough gardening jobs to keep her here. We had found her enough jobs to maintain her labor income but a glitch came when she told us that she wanted to keep her girlfriend with
her. She became “disenchanted” with her boss and his wife because of the way they had been treating the members of the crew. Formerly she had no alternative so she endured it but when she had the gardening option, she began to skip
the day labor jobs in favor of the gardening. The labor boss became upset and told her to leave her “housing” in the construction shacks behind our house. Fortunately, the day before this happened we had found a shed that she and
her friend could live in at the farmhouse 100m behind our house for 1,000 baht/month. Lek and her friend were able to move to that location the next day.

The “shed” is an interesting location with no “bathroom” facilities. A few days later she took the day off with our shovel and hoe and dug a hole about 1.2m diameter and 1.5 meters deep. Oh it was an interesting sight, perfectly
round and deep. The landlord originally wanted to charge us 6,000 baht to construct a proper bathroom. Lek said she would do something but not to spend the money. We were able to purchase the cement casing and a toilet for 800 baht and the girls
will now have to get that installed. I don’t know what she will do for walls but know she will come up with something. Now she will have to come up with something to create a “shower” for her and her friend.

Finding enough work to support both girls is a short term problem since many of the houses in the complex had already purchased and prepaid for the year for gardening service. Yesterday we were able to get one of the two available gardening jobs not already
prepaid to the builder. When the year is over we are vary sure that Lek will have no problem being employed by every homeowner in the complex as all have indicated a desire to use her in the future because of the work she has done on her current
properties. If she and her friend can endure the lesser pay for a while, they will be rewarded with an income far beyond what they could have imagined earning as a laborer. There is even a possibility that they could get the full time gardening
job at the large house at the end of the street that comes with housing on site. Oh, how the girls are looking forward to that possibility. 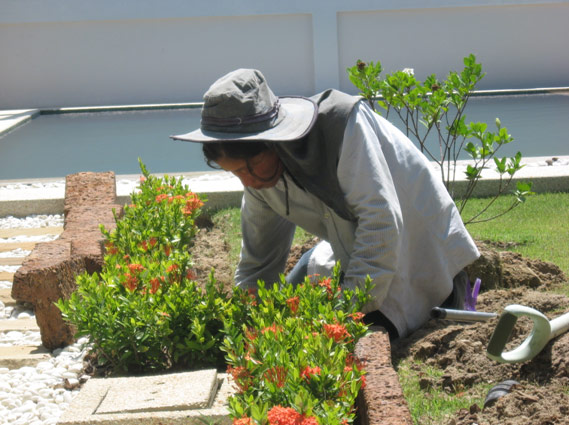 The new job just obtained is supposed to be “temporary” as the new homeowners had indicated a desire to take care of their own yard. When I told Lek about the new garden job that could last only two weeks, she immediately went into action
and began watering the lawn to bring it to a fully green state like the rest of her yards. The homeowners could see her working and when they showed up the next day found their yard in a completely different state. Lek had trimmed the overgrown
banana plants and bougainvilleas and reestablished the border between the lawn and planting areas. The new owners were so impressed with her work and questions as to what to do with the dead plants that today they brought in about 20 loads of
planter mix and 10 bags of coconut shells with a load of plants to come. It does appear she has earned herself another job and some extra money in addition to the gardening pay for all the extra work.

It is interesting to watch the “team” work. Lek shows up at our house between 7 & 7:30 in the morning to get the gate openers and off she goes to work into the darkness almost every day. Lek is the leader as she is the first to arrive
and her friend an hour or so later. Her friend is a nice but not very motivated person. She is a good follower with Lek always telling her what to do.

Months later: Much happened since the above was written.

Work: Lek continued to work on her yards and frequently was requested to do extra jobs like cleaning houses, extra landscaping improvements, painting and planting more plants. Just about anything,
a homeowner did not want to undertake themselves. Unfortunately, there was not enough income to support Lek's friend so she had to leave to find another job. Later on one homeowner asked Lek to clean her house twice a week for which she was
paid 300 baht per day (in addition to the 500 baht/week she was earning to maintain the garden). Her income from just that house came to 1,100 baht per week. When we learned of that new income we were all pleased that Lek would now be earning
over 12,000 baht per month and could now see the financial benefits of all her loyal work for us. 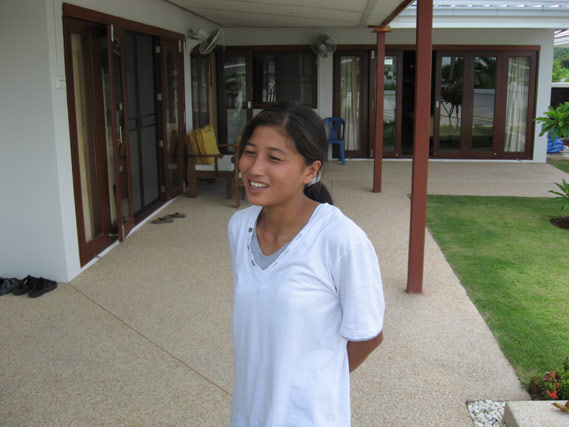 Housing: A Spartan living arrangement at best but the toilet didn’t ever get completed though the cement rings had been put in the ground and much later the ceramic Asian toilet mounted on
top but the “walls” or screens around it never got installed though some of us had paid for the materials. The landlord just didn’t want to do much for the 1,000 baht he was collecting per month. At the beginning of a month
the landlord came to our house asking if Lek wanted to continue living there as he had another renter interested in the place. We told him “yes” and this began the cycle I can best term as harassment. He complained that Lek was leaving
a mess in the shower in the main house and requested that she not use it any more. I think some words were said but it can all be boiled down to harassment to get Lek out so he could get his other “renter” in the place. Lek finally
told us she did not want to live there any more and would be moving to live with her sister who was a 30 minute walk away from the complex. To cap this off, the landlord came by our place after Lek moved out and requested that she remove her dogs.
We told him that she had no dogs and in fact there is a large pack of the sorry lot of soi dogs that hang around his property. We became disgusted with his actions and it was not too many weeks later that his job as a night security guard to our
complex came to an end because he was sleeping on the job. We were certainly pleased to be rid of his presence.

I became concerned that transportation to and from work might become a problem so I purchased a new bicycle for Lek to use.

Developments: One day I was told by our neighbor that Lek had told her that she was not being paid properly for the job of House Cleaning and Gardening (1,100 baht). This was a big surprise to me as I had been told by the homeowner that they were paying
her 1,100 baht weekly and in advance of the work being done. I immediately verified this with the homeowner again and we were all mystified as to what was going on here. My wife and I took Lek aside and I showed her on paper what she was being
paid for each job at that house and the total amount being paid each week. It is difficult to know how much was understood as Lek does not speak fluent Thai but rather some other Karen language. Who knows if she could even comprehend the large
numbers I wrote on the paper.

Towards the end of last month, Lek came to us in the morning and said she was going home because her mother was sick. She did not know if or when she would be able to return. It was a very sad day for many of us in the complex.

Several days later when my wife and I were not here, she returned and told one of the homeowners that her father did not want her doing the kind of work she was doing for us but wanted her to go back to construction labor again. She had gotten another
job in construction for 160 baht/day and that is what she would be doing and would not return to work for us. Another sad day for us.

After this happened we heard from the lady at the little market down the street that Lek had been complaining that we were not paying her the agreed upon amounts every month. I think the whole problem here is the way she was being paid. She was used to
getting paid either once or twice a month from one person or source for her work. Here she got paid by the month from 7 homeowners and weekly from another. I can only speculate that it was difficult for her to put all of these payment sources
together and get a total picture of the 11-12,000 baht she was earning every month. She came from a world much simpler than ours and the leap into our world of money and finance apparently was difficult for her to comprehend. In retrospect we
now know that someone should have collected the money for Lek's work and paid her all at once either once or twice a month like she was used to in construction. I think she would have understood this rather than the fragmented pay she received
from so many sources here. 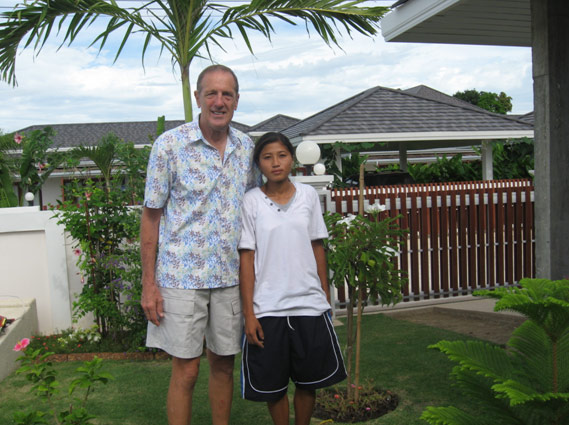 The big success story we had all hoped for and what we thought Lek deserved, sadly has left us now. We have had an interesting education in dealing with the rural Thai mentality. Guess you have to take any victories you achieve and be happy with them
when they come when they come. We all really miss that smiling, hard working girl we all learned to appreciate so much.

That's all rather sad.