Expat Life In Thailand, I Am Not Complaining

I have had a steady girl for the last 3 years and we live in a small village on the outskirts of Chiang Mai for about 5 months of the year and I work in the UK for the other 7 months. For those who think the standard of living for expats in Thailand has
deteriorated in recent years read on and think about where you would rather live.

All prices are in UK sterling for comparison purposes, (£1 is about 70 baht).

People are obsessed in the UK with owning a house’ which combined with low interest rates has resulted in the average price of a property rocketing from £60K to around £180K in the last 10 years. Doing it on the cheap, to buy a run down
2 up 2 down terraced house in a semi slum area in Warrington means forking out around £100K.

Me and my girl bought a 2-bedroom bungalow in a small village about 6 km from the centre of Chiang Mai. It is about 12 years old, has off street parking area and a small front garden; cost £8500. 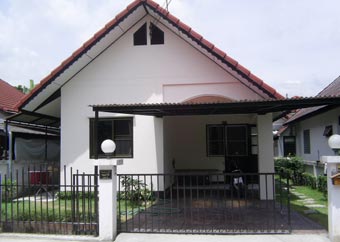 I fitted a modern kitchen (£2k) and bathroom (£1k), decorated throughout and it is just perfect. I paid cash (just over the 10% deposit required on the above £100K terraced house), council tax is negligible and my girl pays the water and
electric so I don’t know how much it costs but I think it is fairly low.

The main downside here is, as an expat I can't own the house; it is all in my girlfriend's name.

For the last 6 months I have been renting a small 2 bedroom flat in Warrington for £600 per month. Council tax is £70, water £35 and electricity £25. All in £730 per month, but it was a brand new build and was furnished to a very
high standard with a 42" plasma TV, leather sofa and top-notch kitchen equipment.

Going back 3 years we rented a flat in Wippanan Mansions in the centre of Chiang Mai for £80 with a monthly electricity bill of around £8. Almost new with good security but the furnishings were as you would expect, basic.

Second hand cars in the UK over about 7 years old are very difficult to shift. As a result a decent motor can be had for £1k to £2k and I drive just such a vehicle. Very reliable, not much street cred but who cares, it gets me around and is
cheap to run. Buying a new car in England is a much more expensive affair. A new 2-wheel drive Mazda BT 50 pick up truck costs around £15k, but just watch it depreciate over the next 5 years or so.

Second hand cars appear to hold their value in Thailand. A look through the local Automart shows 7-year-old vehicles such as a Honda Civic on sale for £2.5k to £4k, second hand pickup trucks are similar. Me and my girl plumped for a brand new
Mazda BT 50 pick up; total on the road price (including fully comprehensive insurance, 2 immobilizers, a car alarm and a brake / clutch pedal lock) was £9k. It doesn’t have the airbags, ABS, electric mirrors, etc. that you got on the
UK version but is all that stuff really necessary? £6k cheaper and a higher resale value down the road cuts it for me.

A trip to KFC (UK, Speke near Liverpool)

Now Speke is a particularly run down area near Liverpool with a rather high crime rate. The first thing I noticed was the long queue as there was only one guy cooking the chicken and one guy taking orders, packing, serving the food and taking the money
(it was a Saturday lunchtime). When I got to the front of the queue I am faced with talking to the assistant through toughened security glass with a small gap at the bottom to pass the food through, a combination lock prevents anyone entering
the kitchen area.

A trip to KFC (Chiang Mai)

About 4 assistants manning the same number of tills with a similar number in the cooking area results in a very rapid service. After receiving my order another assistant carries my tray to a table of my choice. Iced water is available free in the eating
area (this is not provided in the UK as I guess it would discourage customer from buying further soft drinks at £1.50 per cup).

The UK is currently going through a binge-drinking crisis and Warrington on a Friday night is a nightmare. There are police everywhere, each pub has a couple of bouncers and there is a flat bed wagon parked in the middle of the street with a huge bill
board advising punters what to do when their mate overdoses on drugs, complete with an 'anonymous' help line number.

The women are just plain fat with masses of flesh hanging out of their skimpy tops and mini skirts…and they actually believe they are attractive. Add to this some pubs charge a £2 to £5 entrance fee, a bottle of beer costs £2.80 and you
can understand why I only went downtown twice in 6 months.

Head down Loh Kroh road, not a policeman or a bouncer in sight, just rows of slim, pretty girls, most of whom would like to accompany you for the night (for a small fee). There is a party atmosphere, 3 go-go bars and the price of a bottle of beer…90
pence.

For couples there are heaps of small bars and restaurants, some with live bands and all for a fraction of what it costs in the UK. Getting home by tuktuk just adds to the fun.

The Flight (KLM, Manchester to Bangkok)

I flew over with KLM, reasonable service but the plane was an antique, some of the stewardesses where the wrong side of 50, but the food was good.

The Flight (Bangkok to Chiang Mai)

The stewardesses where stunning, the plane brand new and spotlessly clean. No food on the flight but couldn't fault the service.

I could go on… trips to the hospital / dentist, hotels, hiring a car, eating out etc. To me, anyone who complains about the standard of living in Thailand has been here too long and doesn't know what it is like in the real world. The people are
friendly, the weather is brilliant, and there is loads to do. I go back to the UK every year to work but I will never live there again. Life here is just so laid back and comfortable and for me and my girl, it just could not get any better.

That's a fair comparison, but I would suggest (and I mean absolutely no disrespect to the locals) that Warrington is perhaps not the nicestplace to compare Chiang Mai with. If for example you compared Chiang Mai with Sydney, Australia or Auckland, New Zealand, while the lower prices might still be in Thailand's favour, those two spots would still have more than a few positives.

But fair point, in many ways Thailand is hard to beat.

Why So Many Relationships Between Farang And Thai Girls Are Doomed

Confession Of A Mechanic Part 3