“There but for a typographical error, goes the story of my life”

Surely as good an entrée as any to the thorny topic of expat work in SE Asia. I’ll give it my best shot as to the scene in Vietnam.

“Tis the wit of the quote that grabbed me, not the reality of the scenario that it paints. For this is an enterprising, enervating culture, which together with its big brother China, will surely show the west a clean pair of heels
before too long

The Vietnamese are desperate to learn English. Plenty of room for western entrepreneurs in this field methinks.

Yes you Teachers. Why not start your business?

A man’s reach should exceed a man’s grasp or what’s a Heaven for?” – Robert Browning.

It may surprise you to learn that it will take “them” far longer to trust “us” than vice versa for they think of us as “Here today, gone tomorrow”, Strong roots are a foundation of their society and
success will not come overnight.

Outside of teaching I’ve watched Westerners, predictably, get killed trying to compete with the Vietnamese on their own turf, slaughtered on cost grounds. We need to bring in skills that the Vietnamese don’t have. Language for
one.. In Nha Trang there are successful dive shops, the same formula would probably work in the gorgeous & largely undeveloped Island of Phu Qoc.

An American friend of mine runs a highly successful software company, just blown away by the commitment & expertise of his staff.

For those of you who make their living on the net & wish to live in the worlds most beautiful eco town, & don’t mind a cool, often rainy climate then pack your bags & come to Dalat, Internet facilities & lines are state
of the art & inexpensive. “Stand not upon the order of your coming. Come now” – apologies to the Bard.

In teaching “jobs” terms, working conditions in my adopted country seems to me to be remarkably similar to that described by the Venerable Stick with respect to Thailand. The same badly managed private schools, profit driven,
where working god’s own hours is de rigour, the same orderly state controlled enterprises with 50 to 60 students per class. But there still some gems around.

The Oriental’s firmly believe that Teacher will talk, Students will shut up & listen and “write this down” Ok for history perhaps but hardly good for conversational linguistics. 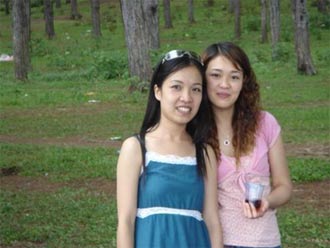 I met lots of genuine “teachers” who thoroughly enjoyed their stint in Vietnam. In particular there was a middle aged Aussie couple in HCMC having the time of their lives, taught as a couple Presumably they were able to act as a bulwark
against all the crap that was thrown at them.

But its not a good “career move”

Vietnamese red tape demands a “degree certificate”, actual teaching experience deemed as being unnecessary. Back at my hotel, a pleasant young German had a “masters” in Paleontology (or something) Superstar!! So
he got recruited & commenced the same day at $20 per hour. Trouble was, I could barely understand what he was saying & he was teaching guess what? At the hotel we all liked him but despite our gorgeous hotel receptionist draping herself
all over him he got drunk three nights in a row then left Vietnam altogether. Happens a lot in HCMC, folks with no teaching experience getting mangled.

I had a surprisingly enjoyable stint in a luxury Saigon kindergarten for a while. It was exceedingly well managed with competent Vietnamese teachers controlling the little horrors. Free pool & gourmet nosh. Twenty dollars an hour but
only one hour per day, that’s enough to live on in Vietnam.

Now it became & befell & be happened my dears that your worldly-wise correspondent, equipped with the aforementioned knowledge still managed to come to grief in Dalat. Within a prestigious private school at that, the management &
I not being engaged upon the same enterprise. Nearly came to blows we did.

At least the students and I developed a real rapport. 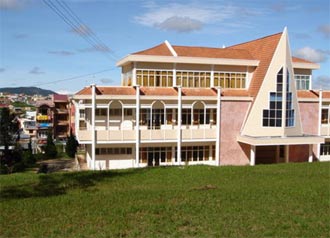 With a trust fund behind me on which I can live quite comfortably, these days I run my own school, as joyful a business as I ever got involved in. For promotional exercise I don’t charge as I write (but monies “appear” in my Anorak
pocket). Tomorrow is another day (Cochise).

‘Pon my return from Nha Trang my students were waiting in my hotel reception, laden with fruits, alarmed lest I had gotten skinned (that’ll be the day). But an irritated chorus went up all over the town “Where is your
girlfriend?:”

Scarcely had this murmur had died down, when my stubborn refusal to even contemplate pair bonding with a local girl was vindicated in quite sickening circumstances. One of my favorite students, a strong willed young Physics Graduate, was
forced to go back home to Dak Lak by her parents. Through her tears she told of how she lost a rearguard action and could no longer be so “selfish & uncaring” of the wishes of her Mother & Father. In Dak Lak she will complete
a life sentence, marry who we say, accept the teachers job we selected for you, wear the clothes we select, eat the food we provide, live in the house we choose, forever. With us. God help the poor young man who eventually marries her.

All you budding Lotharios out there, are you listening?

Why can’t women just talk to each other instead of whispering?

Why are they so “conspiratorial” when they whisper so?

Why in a “ménage a trois” is it always girl number two who comes to the fore, by dint of trying harder?

Why in a “ménage a trois” do I fell so at ease, so unthreatened, not so subject to “ownership”?

Why do I, in the same environment, feel so close to the girls?

Problems in my head I dare say, but then I “like” my little peccadilloes. “You can do whatever you want providing you don’t do it in the street and frighten the horses” – anonymous.

Their family modus operandi may be unacceptable to me but how do I explain to them the callous & pitiful way that we discard our old folks? 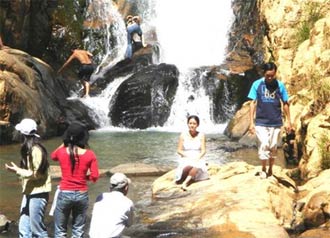 Sometimes I wonder just what they think of us. It has come to my attention lately that I can make the Vietnamese roar with laughter by relating stories about just how cold & unfriendly we Europeans really are.

Switch to the Dreams Hotel, Dalat. Scene of an excellent buffet breakfast.

German tourists – not even a flicker, stare at the table in silence.

Irish tourists will talk your head off all day, but we’ll forgive them for that. God bless ‘em.

Sometimes I really miss the camaraderie & bonhomie of Europe.

Maybe East & West have much to learn from each other.

End of series now. Things to do, places to go.

I’ll sign off with the way I signed in.

“These are the great days of Vietnam”.

(Never to be repeated).

It’s the sheer unpredictability off the Stick sites that appeals. You never know what’s coming next. The thing's alive I tell you.

Come on all you Thai guys & gals Where are you?

Thanks for a nice series.