The protest landscape has changed. Two protest sites, Victory Monument and Lad Prao, have been dismantled. The reasons cited were that they were more dangerous than other protest sites – and there is truth in that for each was easy to get to and just as to get away from. The more centrally located protest sites each have 4 roads leading in, each of which is guarded with at least 3 layers of barricades, each with a set of guards, so getting close to the stage where speakers and large numbers of protesters sit and listen is difficult. Thus, these other sites are safer. 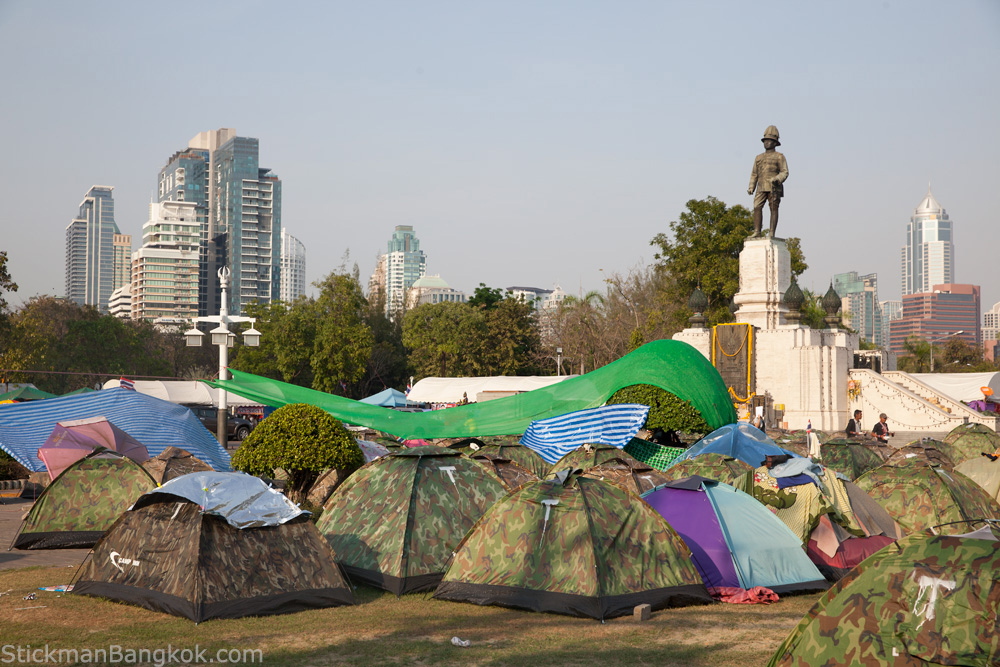 The protesters from the 2 dismantled protest sites were relocated to the Lumpini Park protest site so that is where I checked out today. 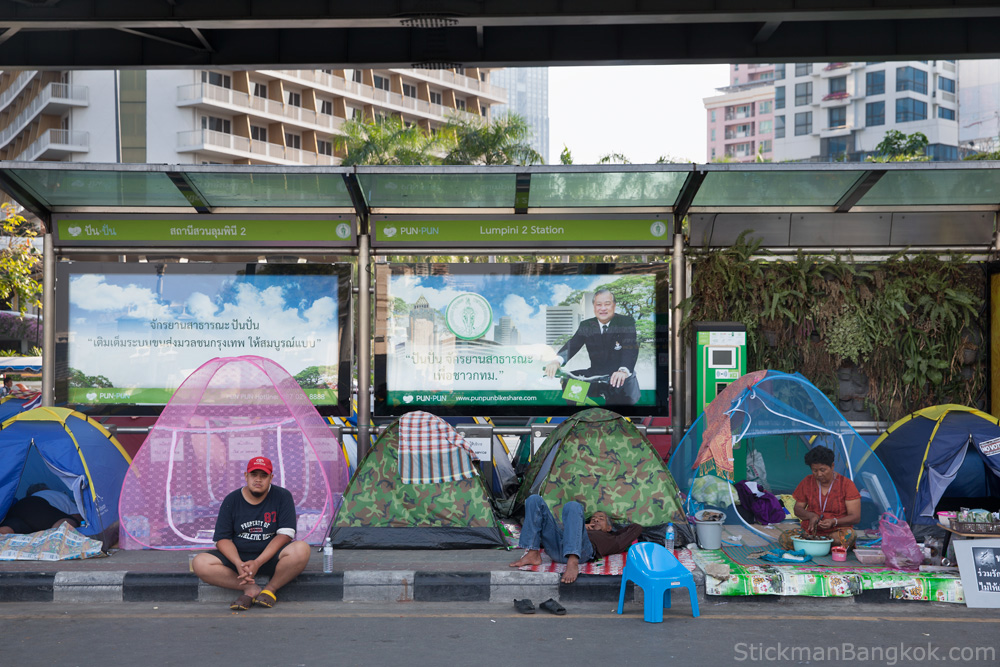 At a bus stop on Rama 4 Road with the Dusit Thani Hotel in the background.

The number of protesters at and around Lumpini Park is greater than it was, but there still aren't that many people there. When you consider that the Victory Monument and Lad Prao protest site permanent residents relocated to Lumpini Park, well, I'd say there aren't that many people there. Have some gone to other protest sites – there has been a small increase in the number of overnight protesters at Asoke – or perhaps some have gone home? 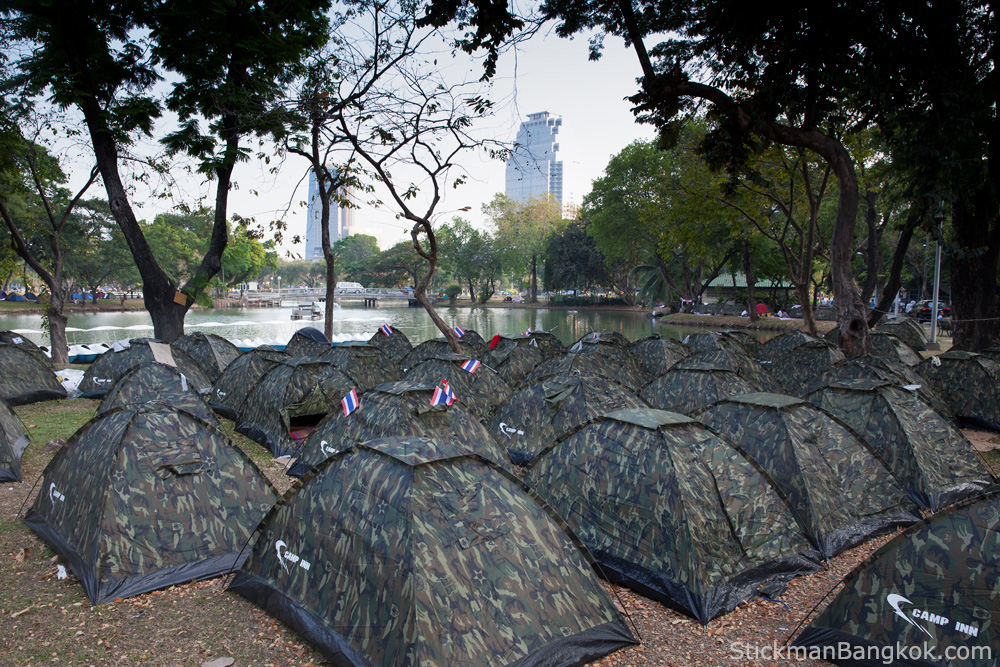 There has been an increase in the number tents pitched in the park with most of the new ones copies of US Army camouflage pattern. When I asked a protester if they were real or not, he said they were made in Thailand. I guess that means not. 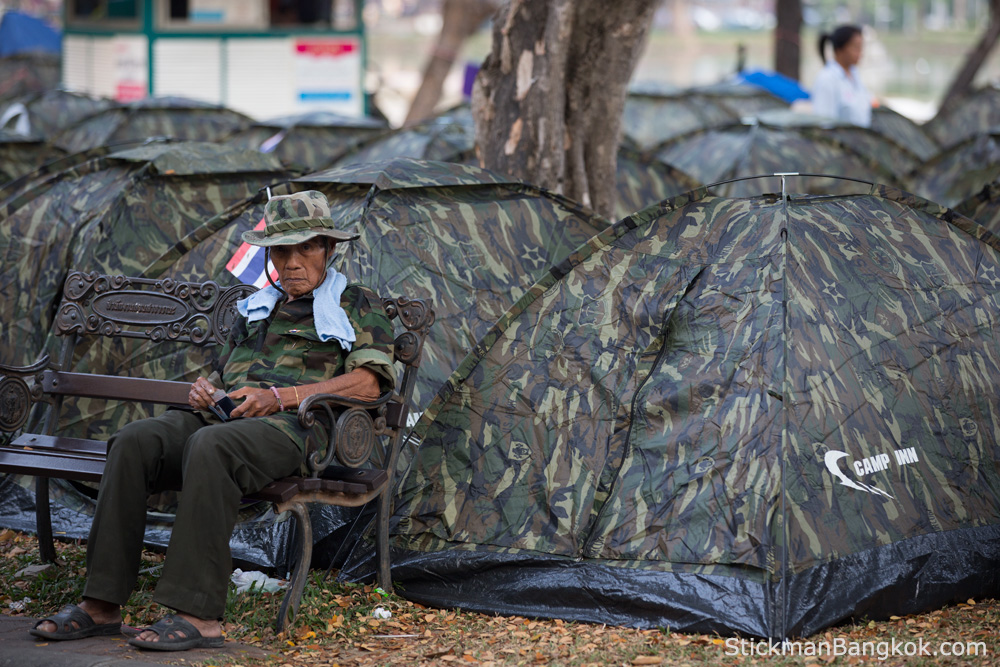 As if it was needed, proof that camouflage really works with this old boy's uniform blending in with the material of the tents. 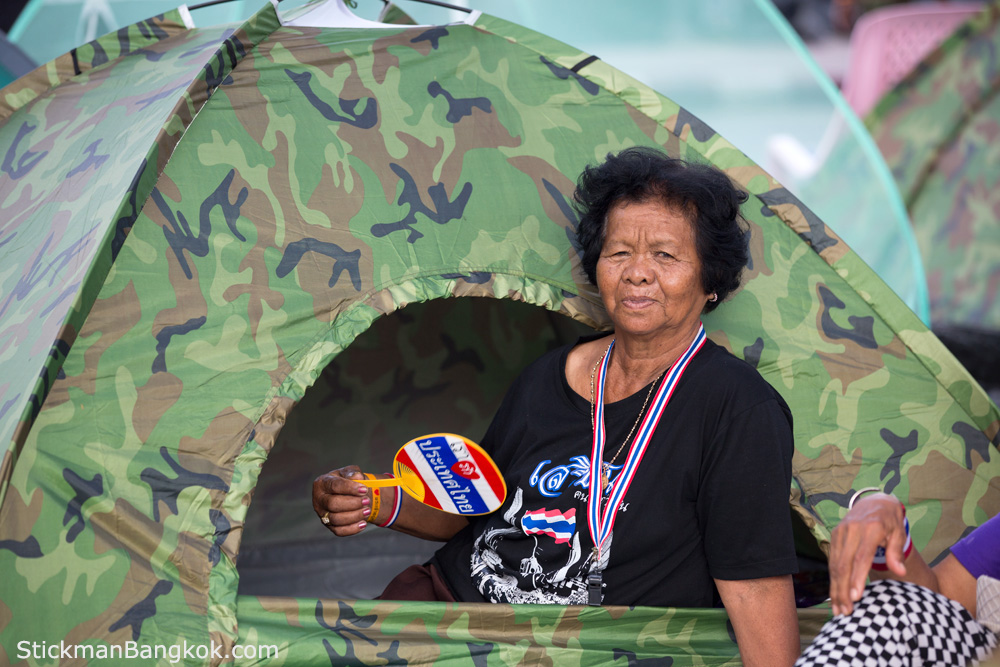 There are still a lot of oldies in the area, and a distinct lack of youngsters. The Lumpini Park protest site really does seem to be the senior citizens protest area. 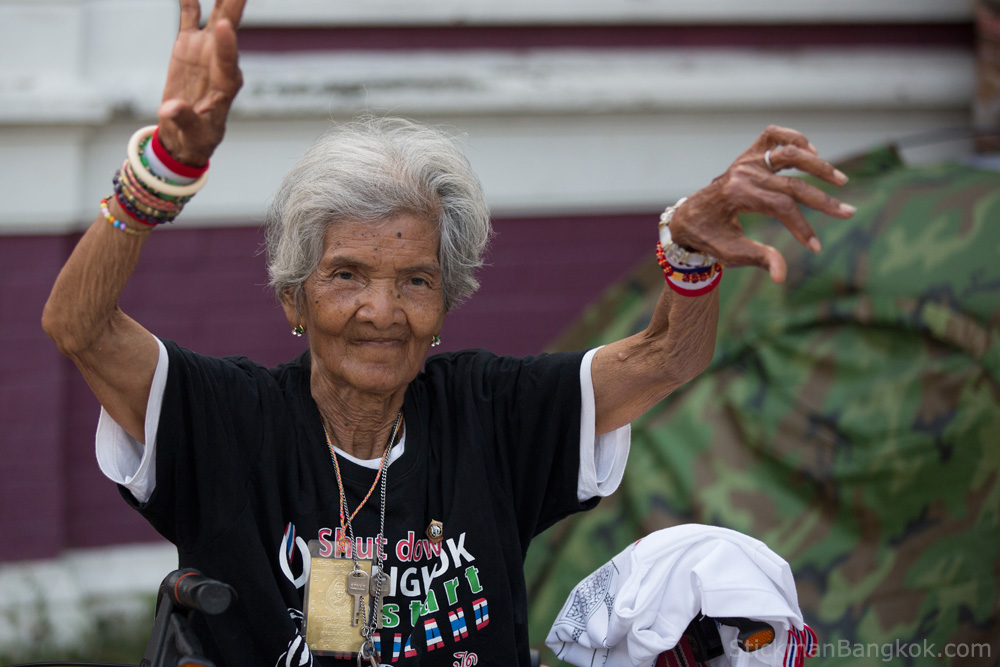 And some protesters are really getting on. This lady is 90 years old and speaks decent English. She trained to be a nurse at the nearby Chulalongkorn Hospital, spent time in Europe and the USA and was agile for someone aged 90. She was positively engaging to talk to.

When I asked her the secret of living so long, she shoved a bag of pineapple at me and told me to eat lots of fruit and veges, and to meditate daily. She then cleared a place on the mat in front of her and requested that I join her in meditation. I told her that the light was good and I was keen to snap some shots in the late afternoon sun and so excused myself. "Well you won't be living to 90 if you don't meditate every day" she said, as I wandered off. 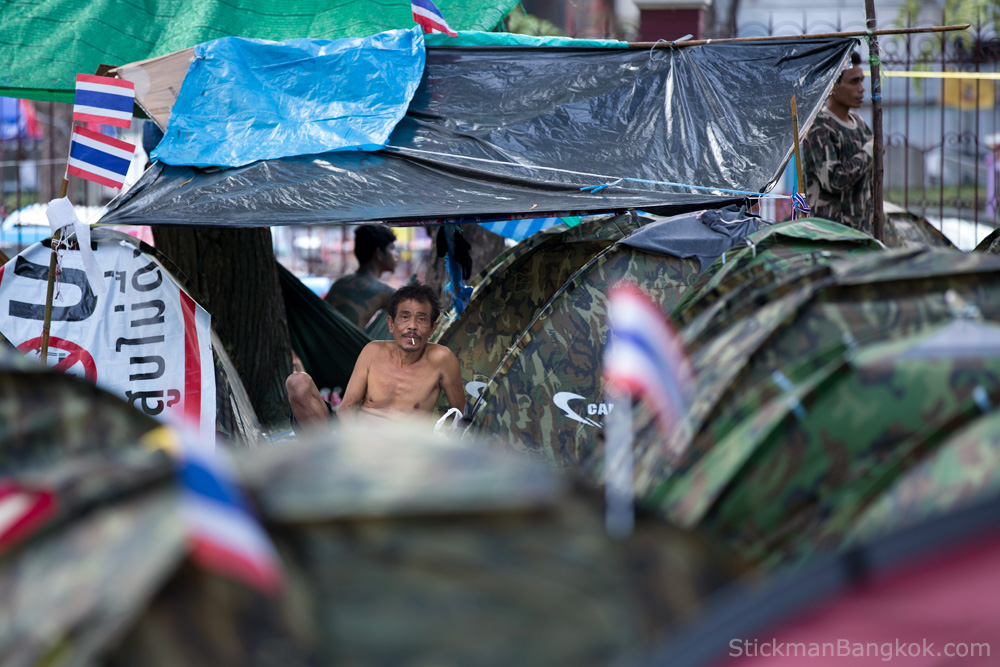 The park is full of characters, but I wouldn't say the atmosphere is jovial, at least not within the park. In front of the stage many protesters seem to be in a slightly better mood, and those milling around the area i.e. those who are not resident in the area seem happy, but those who are just sitting around in the park seemed bored. Attempts to engage some failed, which is not common in Thailand. Has protester fatigue set in? I also noticed far fewer placards or banners with messages, as if the protesters are there in person, but not making quite the same level of effort they were in the first week. 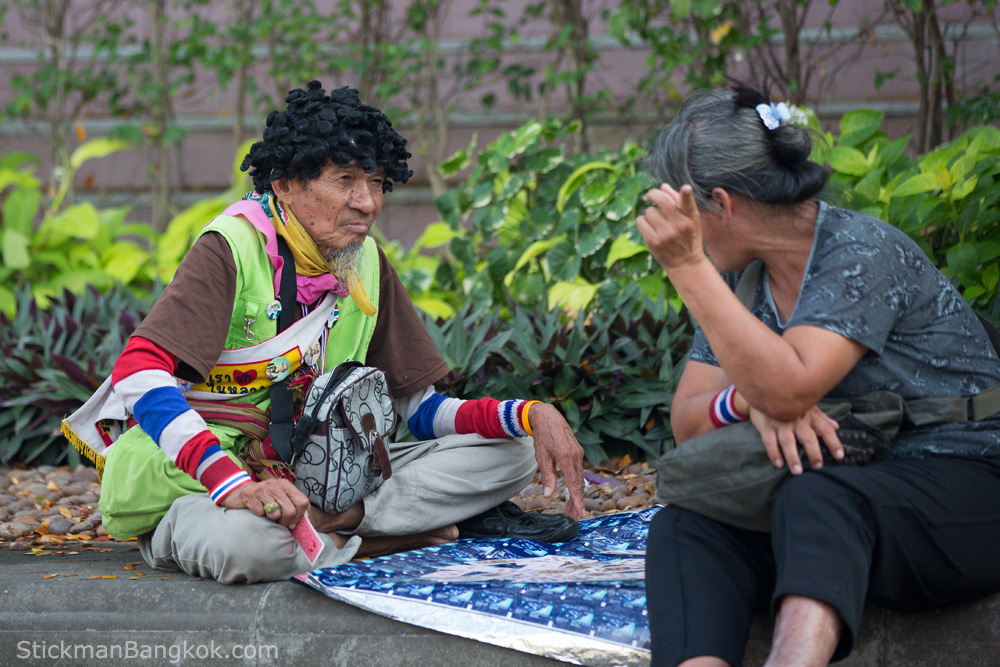 This fellow was as animated as he was colorful. He was a fortune teller, charging 49 baht to read cards and tell people about their supposed fortune. 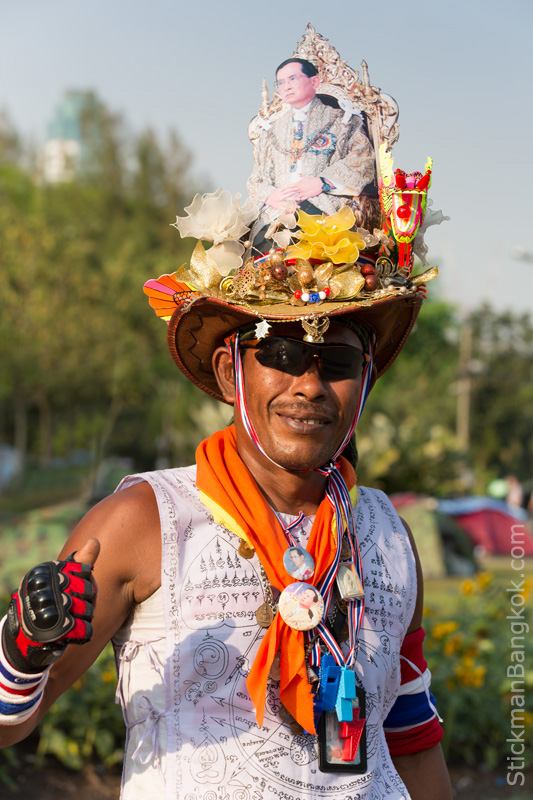 Cool hat! A friendly fellow with a ready smile and a warm demeanour, he was keen to be photographed, but a man of few, actually zero words. 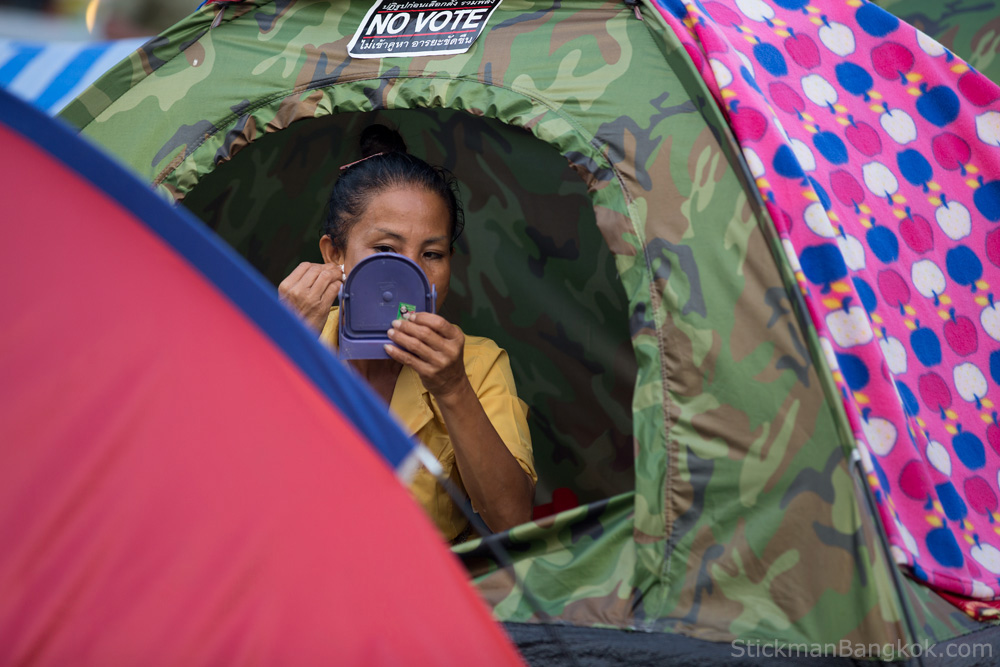 One might be protesting, but one still has to look good! 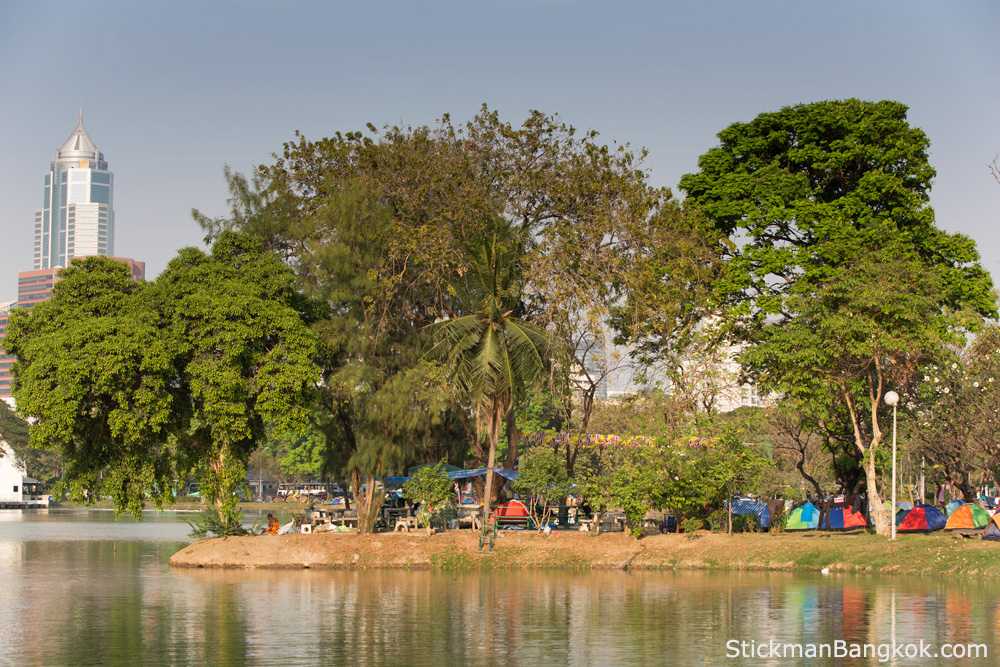 Within the park some have set up tents in what is a lovely campsite location.

Lumpini Park really is a lovely spot and inside its walls the vibe is different from the speed that everything happens outside, with motorbikes whizzing by and buses belching out clouds of smoke. The park is large and most of the tents are set up in the south-west corner i.e. the corner closest to Silom Road, near where the statue of Rama 6 stands tall and proud. 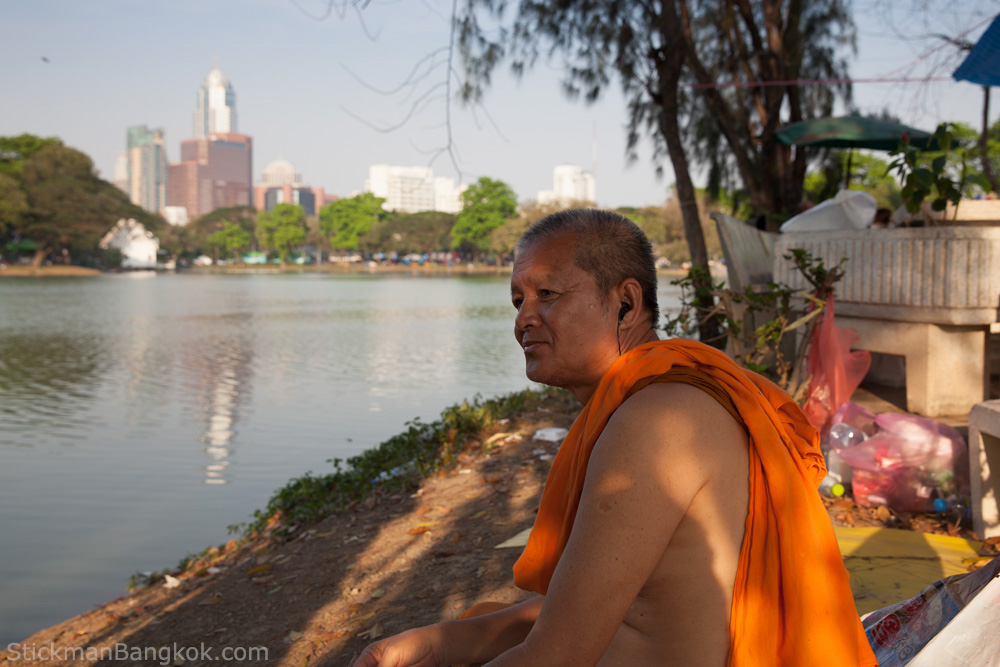 A man of the cloth was enjoying some sounds and the lovely afternoon. It was not clear if he was with the protesters or not. 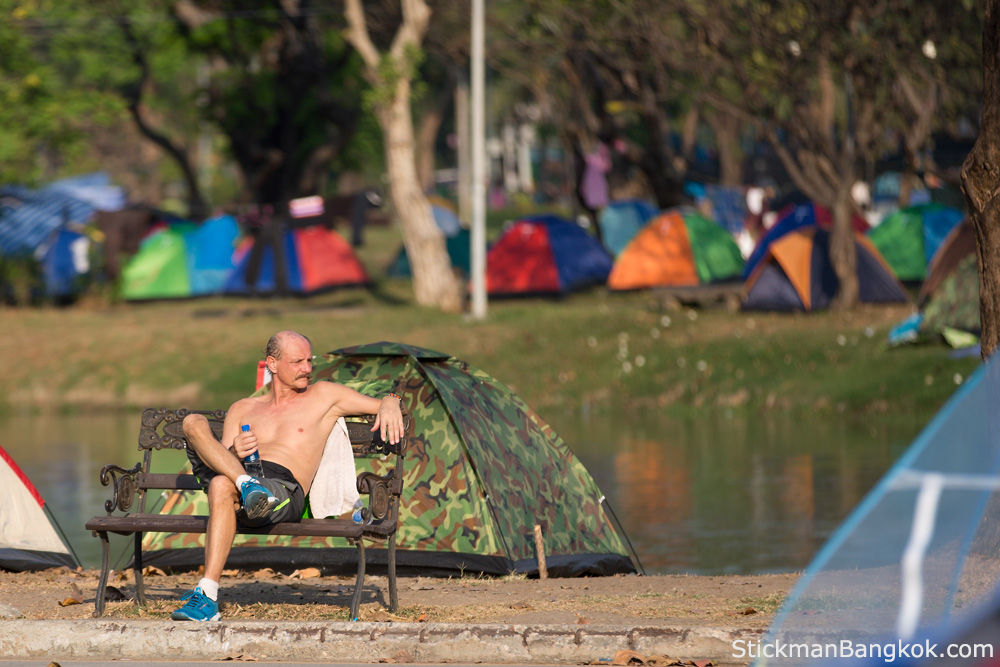 It seemed everyone was keen to get some sun today – and what better place than the lovely park.

Reports in the mainstream press have it that a high-profile foreigner, the president of Thai-Indian Business Association no less, may be deported for his involvement in the protests. Publicly protesting against the government of a country in which you are not resident seems to be moronic to me – and the Thais have been given ample warning to foreigners about this. Numerous mentions have appeared on this site warning about getting involved in the protests. Go along for a look and take some photos by all means, but don't get actively involved! 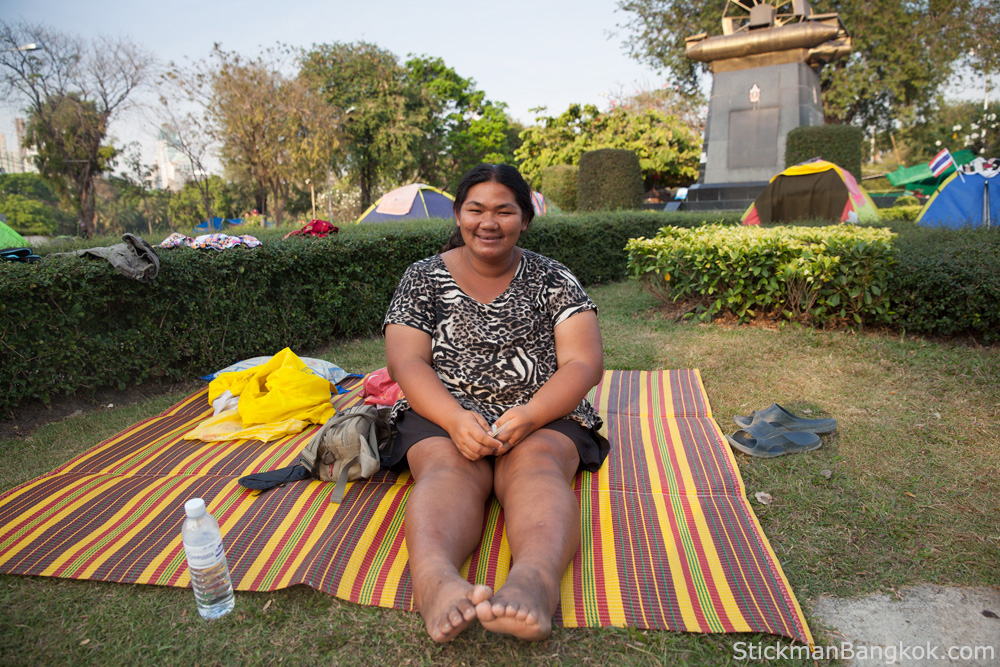 And this southern beauty was also enjoying some quiet time in the middle of the big city. 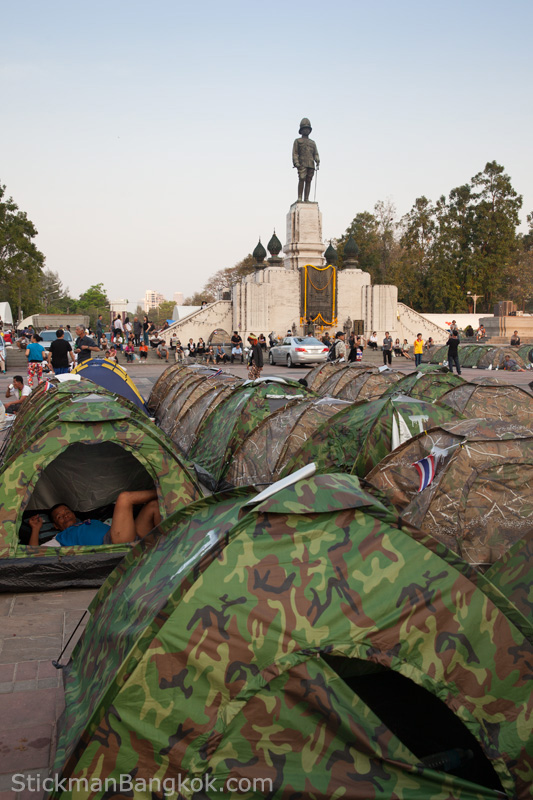 The stage used to be in front of the Rama 6 statue but it has been moved in to the intersection, and the small pond out front of the park has been covered over. 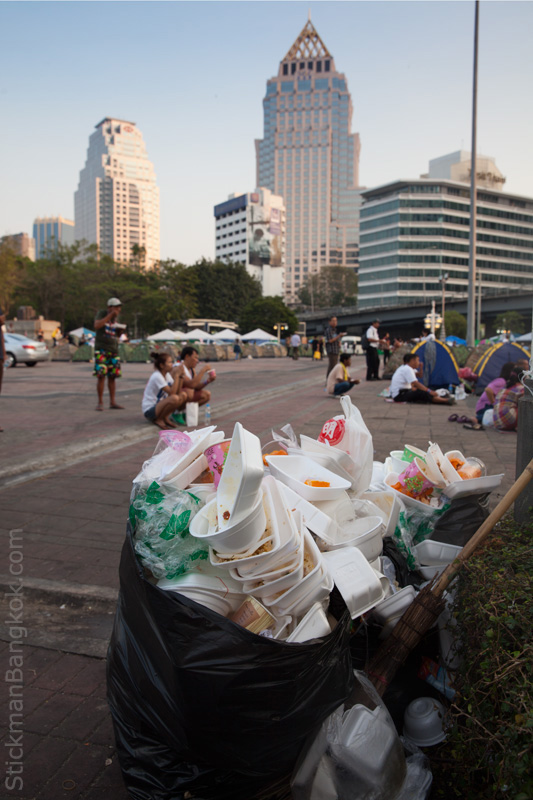 This is out the front of the park, between the main entrance and Silom Road. See how there really aren't that many people around? I mean, given that this protest site is now effectively 3 protest sites combined, where did everyone go? 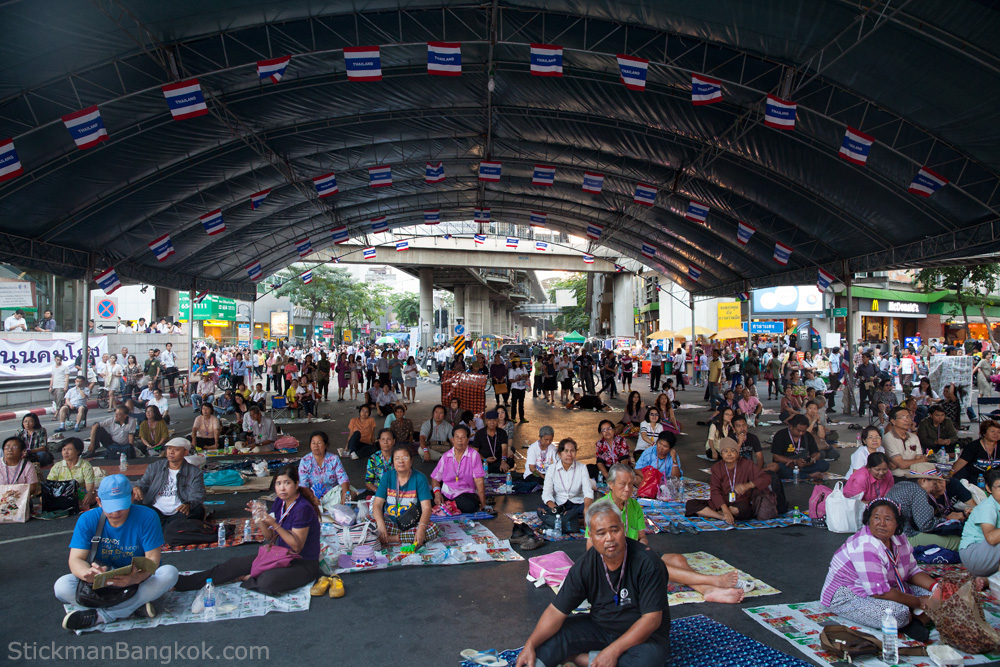 The large marquee is right in the middle of Rama 4 Road, at the top of Silom Road.

I bet there were no more than 1,000 people watching the main stage at Lumpini, in fact it was probably more like just a few hundred, if that. 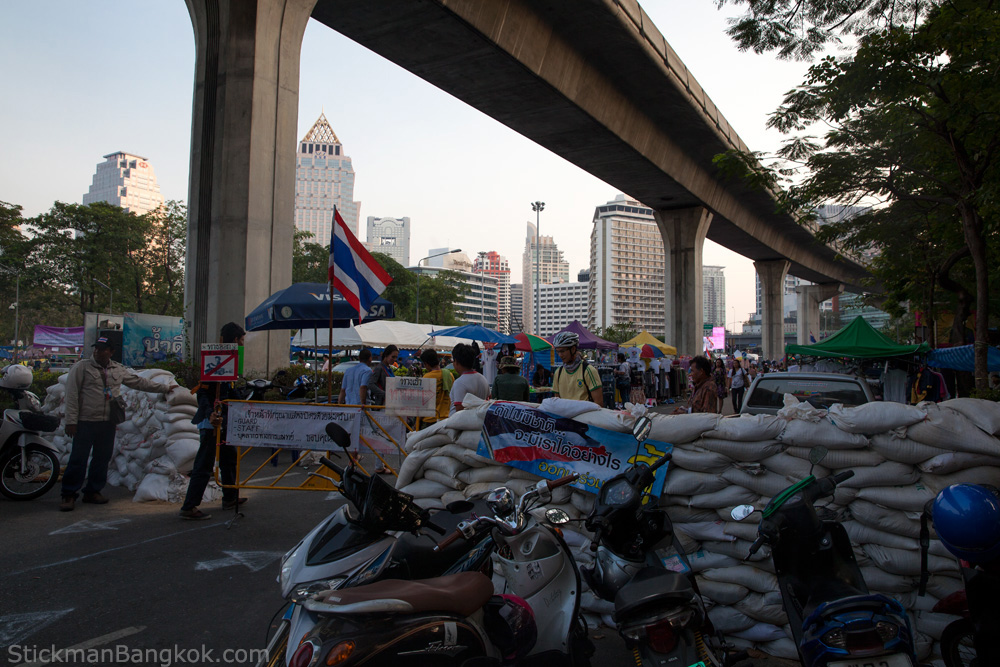 The Lumpini Park protest site sprawls from the Sala Daeng BTS station and goes well up Rajadamri Road. It runs east / west along Rama 4 Road, a few hundred metres either side of the Sala Daeng (Rama 4 / Rajadamri / Silom Road) intersection.

The area was very busy late afternoon and early evening. The market stalls along Rajadamri Road and the top few hundred metres of Silom Road were so busy it was a mission to move along and felt like Pattaya's Walking Street on New Year's Eve. 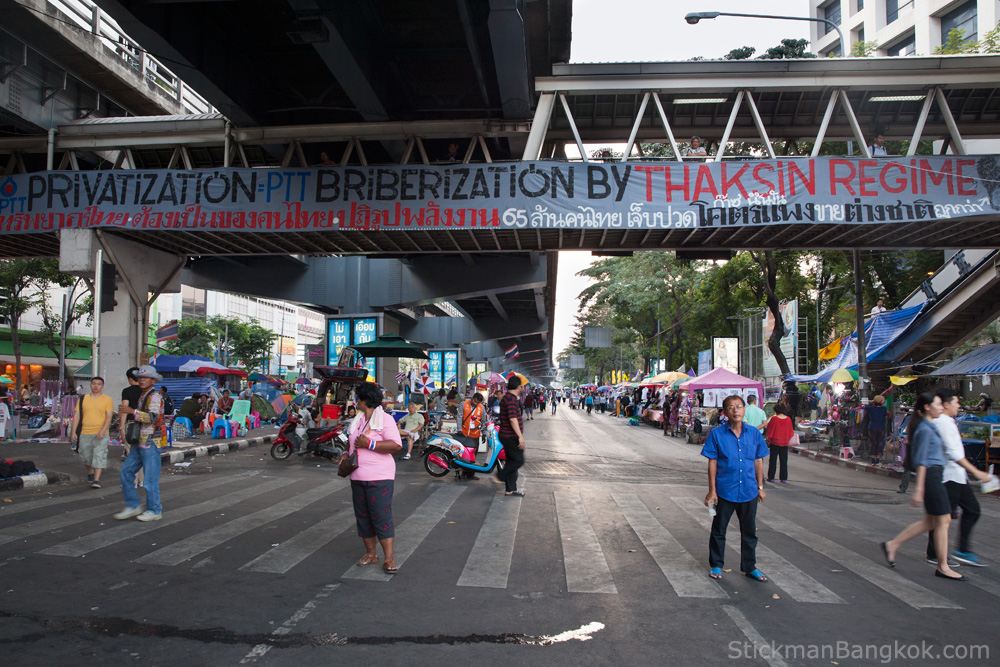 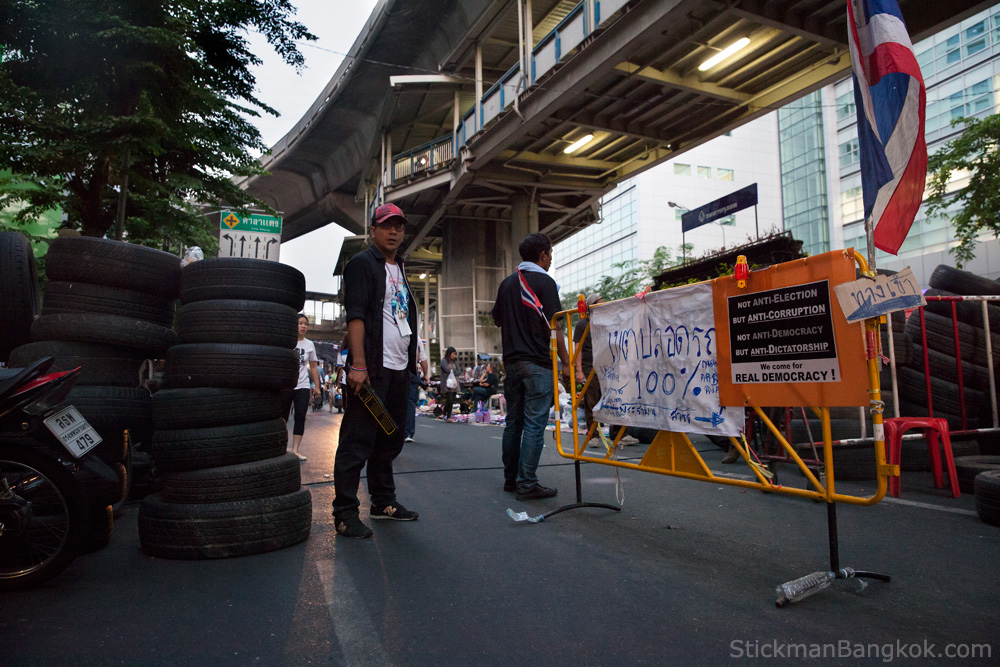 The guards at Lumpini Park are much the same as those at Asoke – un-Thai in many ways, unsmiling, and very business-like. There are many, many guards and also like Asoke, some are wearing protective vests.

The top part of Silom Road was very, very busy and heavily congested, making walking around the area difficult with the throngs of people. Getting to your favourite restaurant or bar in the area is quite possible insomuch that everything is open…but it might take longer than usual, such are the crowds.

If you're going to Patpong, it might be easier to walk down Suriwong Road – and that is the road taxis would probably use, at least if you were approaching the area from the north. Patpong is open and the protesters and their occupied area have not made it that far down Silom Road so at Patpong it is business as usual. 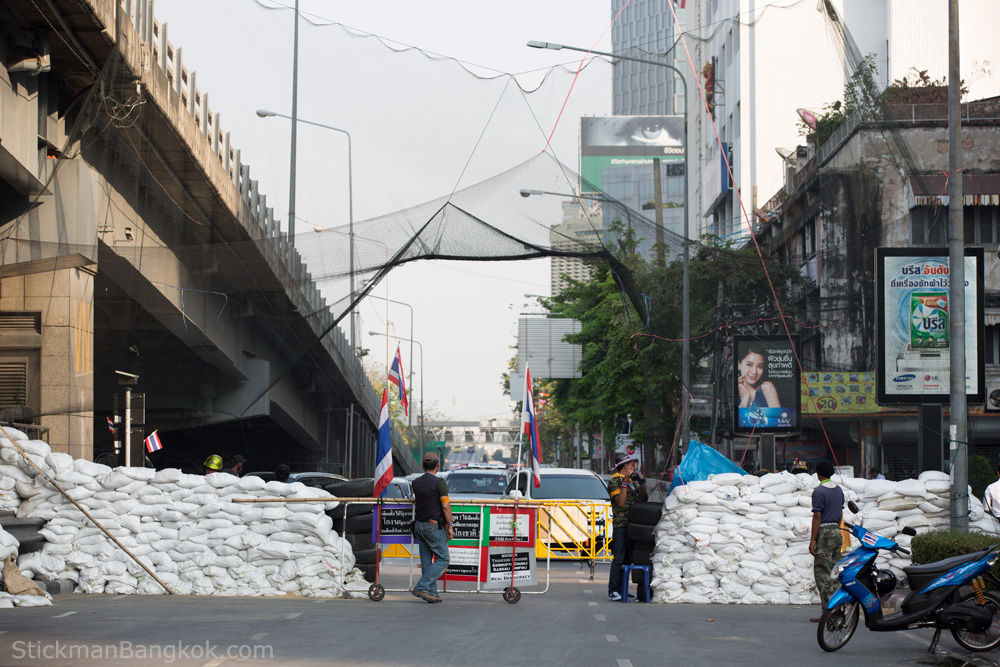 Looking east along Rama 4 Road, the Dusit Thani Hotel is immediately to the right of the photo.

There appear to be more male protesters in the area than females, something you seldom see in Thailand where most places you tend to see more females. 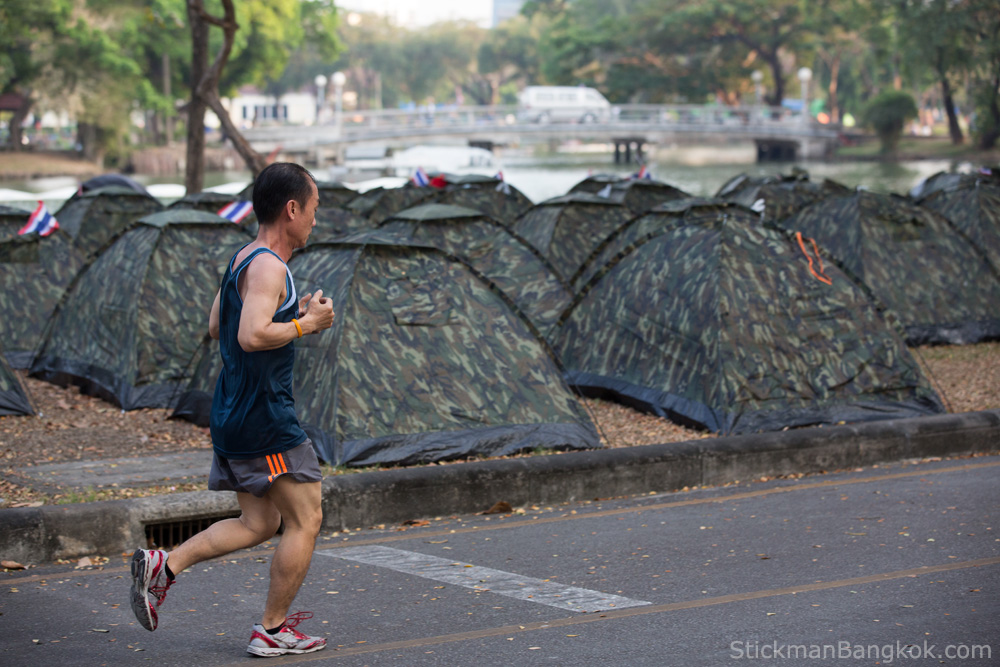 With the number of tents in the park up and many protesters wandering between the tents and the stage / main protest area, the number of joggers and others exercising in the park is well down. Lumpini Park's 2.5 kilometre circuit is the most popular place for joggers in downtown Bangkok and with the protesters making running more difficult than usual I imagine many will jump on the underground and go to Benjakit Park, next to the Queen Sirikit Centre. 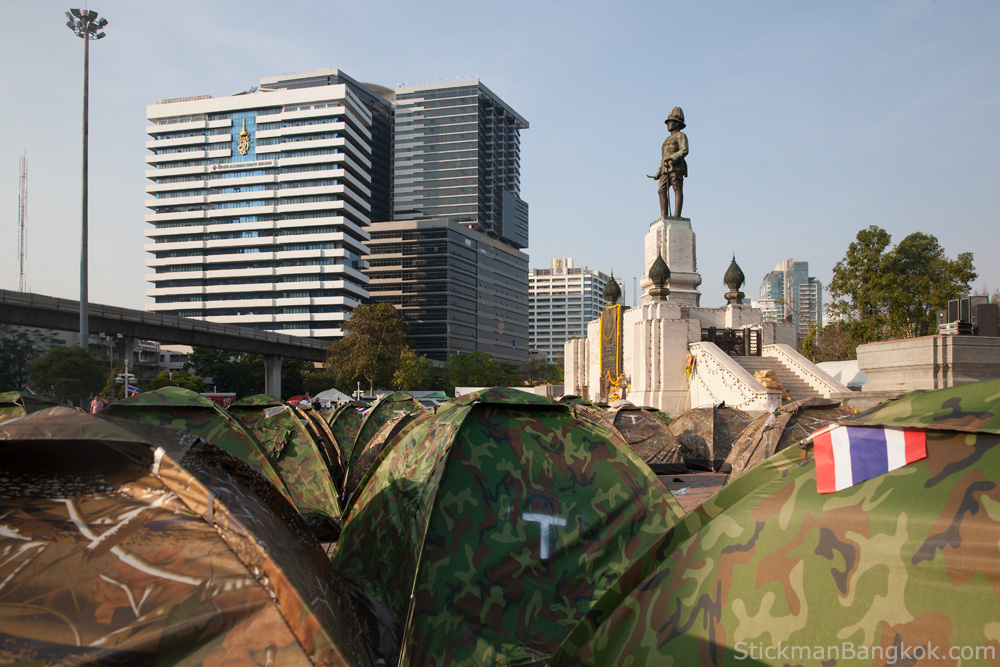 During the red shirt protests in 2010 a lot of local women walked their Western boyfriend through the protest area, there is none of that at Lumpini Park. There were few Westerners in the actual protest area, be they tourists checking things out, expats passing through or reporters.

There seems to be a feeling amongst Westerners resident in Bangkok, even those who live / work far away from the protest sites and who have seen little or no effect on their lives, that the protests are dragging on. Not a lot is happening, and not a lot is being achieved.

It all seems to have developed in to a waiting game. The government is being clever and playing the waiting game. Countless times the protesters have huffed and puffed and said that such and such a day would be their biggest march yet and the final push for victory. They rant, they march and nothing much changes. This become has become a bit of a joke in expat circles. It's obvious that the government is waiting this out. They know that protester fatigue has set in – and with temperatures rising and the hot season not far away, it's going to get more and more uncomfortable for the protesters at the protest sites.

It should be noted that our worst fears have not eventuated and things have not been anywhere near as bad in Bangkok as some feared they might be. Yes, there have been scuffles, skirmished, bullets fired, grenades thrown and, sadly, a dozen or so people have been killed. Many feared things could get much worse. Thankfully, they haven't.

Fed Up With The Bangkok Shutdown