The Asoke protest site isn't expanding per se, but its security measures sure are. With grenade attacks against protesters the weekend before last, one protester taking a bullet in the head 2 days ago and another being shot last night, barriers at the four gates that have to be passed to reach the Asoke protest site have been strengthened and the number of security guards increased. The Asoke protest site does not feel like a fortress in the same way the red shirt occupied parts of downtown Bangkok did in 2010, but neither do the barricades or the heavy-handed guards make for a warm welcome. 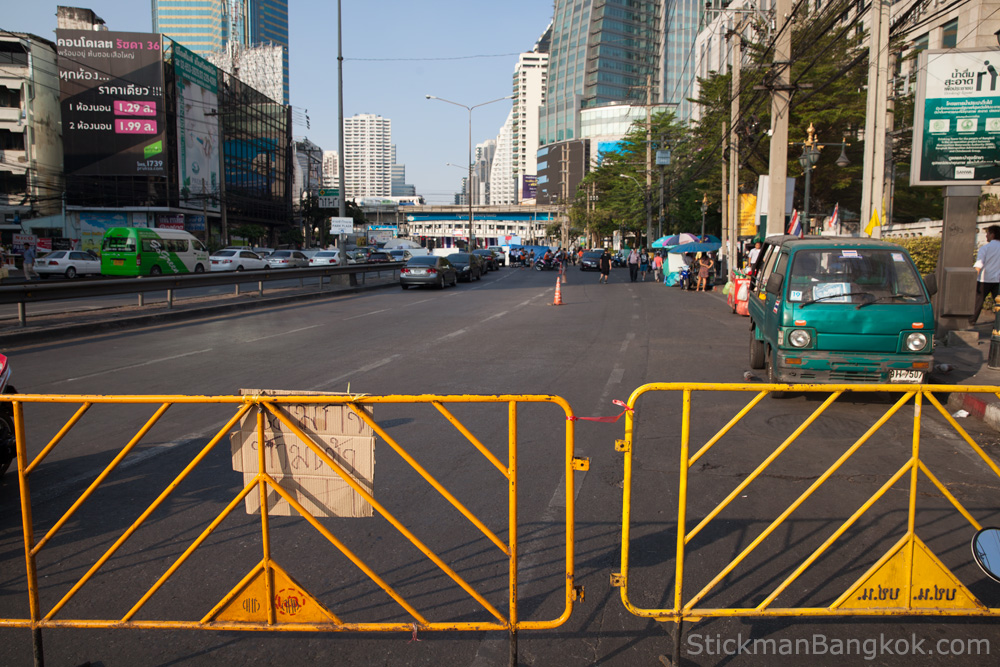 Approaching the Asoke intersection from the south, I come to the first gate. It is manned by just two guards and they seem disinterested in people on foot, more concerned with vehicles and motorbikes. Like about half of the guards on duty, these two are wearing military camouflage jackets. One has tattoos over both arms with the word "bum" written in English on his wrist, clearly visible. 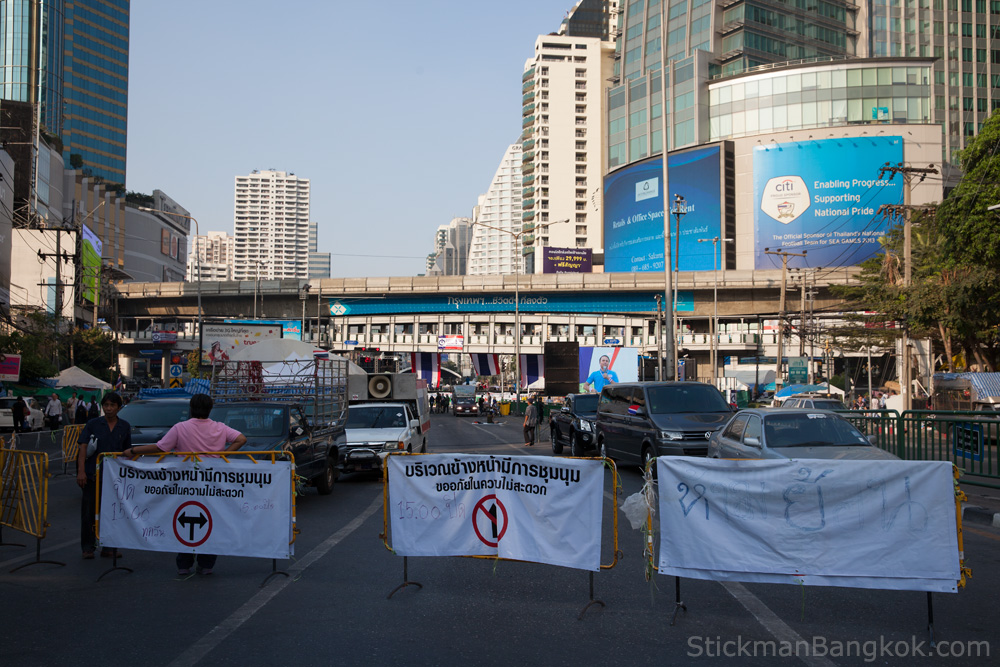 Another 50 or so metres up the road I get to a second set of makeshift barriers. They'd probably stop a motorbike, but that's about all they'd stop. A man could easily jump them and a car would push them aside. Their main purpose, however, is to funnel people through channels so the guards can inspect bags or packages passersby may be carrying. 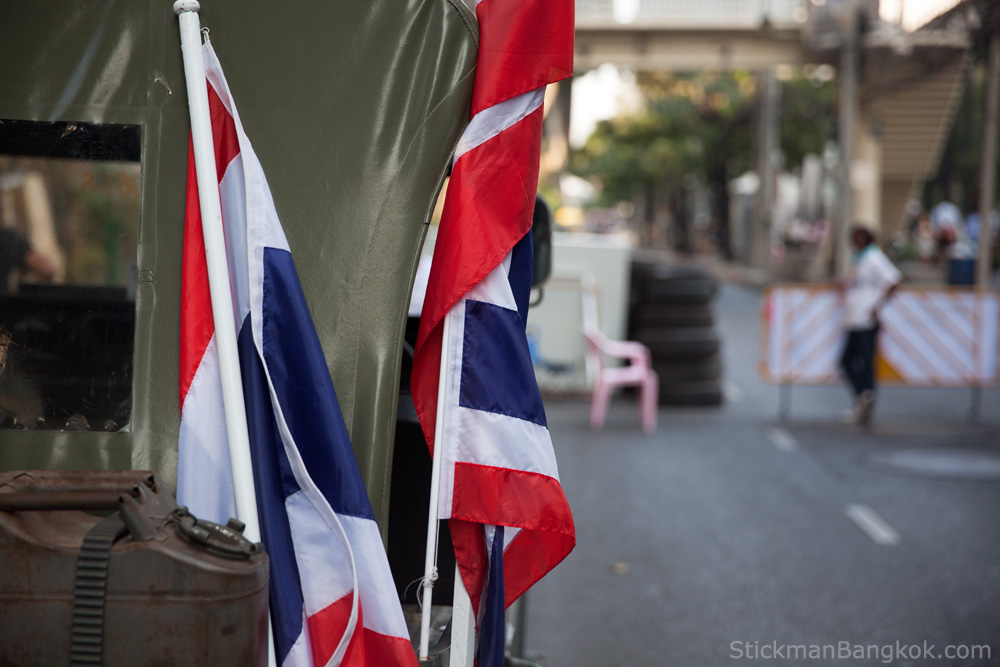 I walk around the occupied Asoke intersection before turning east. I'm heading along Sukhumvit Road, walking away from Asoke and in the direction of Emporium.

Not far beyond the intersection, just before soi 18 is a barricade. Nearby a jeep is parked up and draped in Thai flags. 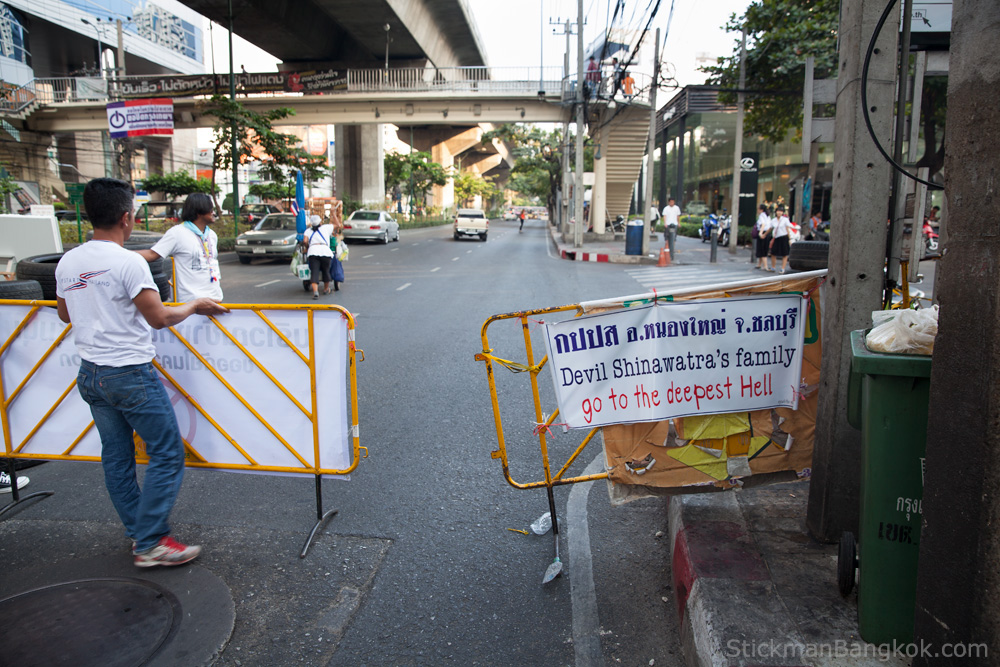 Looking east, in the direction of Emporium. The soi off to the right is Sukhumvit soi 18. 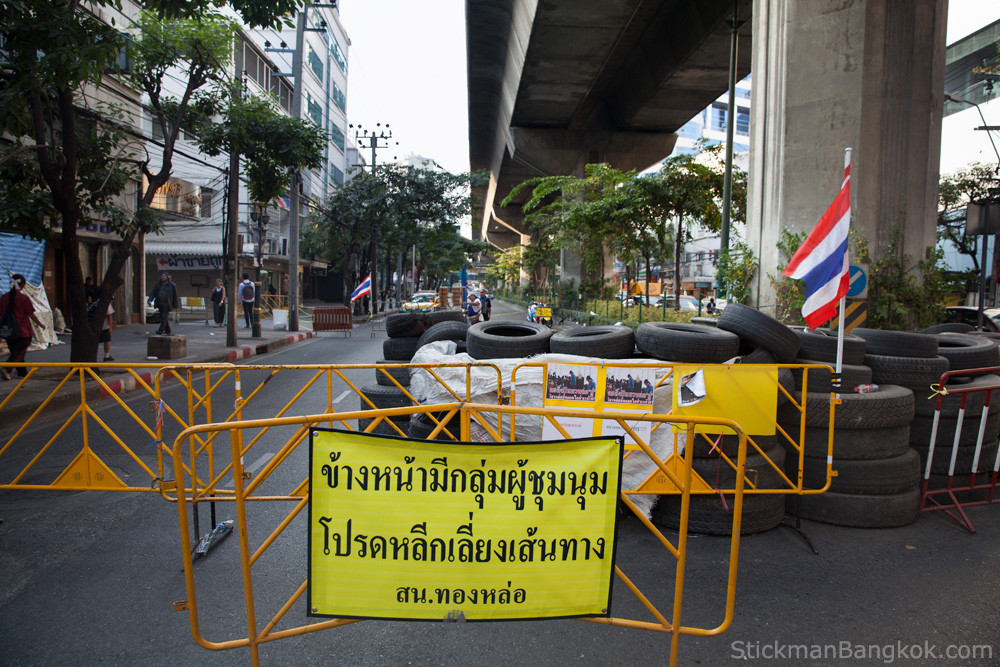 The guards at this particular checkpoint are very sensitive about photos, either of them or even the barricade. I have noticed an increase in this sensitivity to cameras over the course of my visits. With each visit reactions to the camera get stronger and stronger – and not in a good way. In the photo here I am looking west, back towards the Asoke intersection. 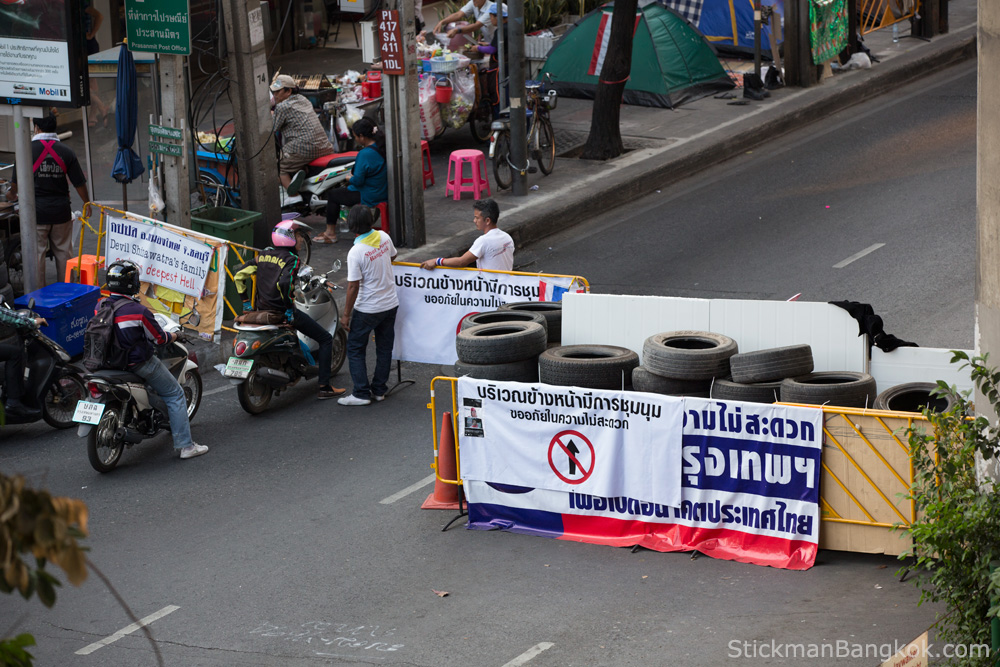 I go up on the overheard walkway and look back down at the guards who are talking to a couple of motorbikes trying to pass the checkpoint. I have no idea what they have to do to get through, or is there a magic handshake? 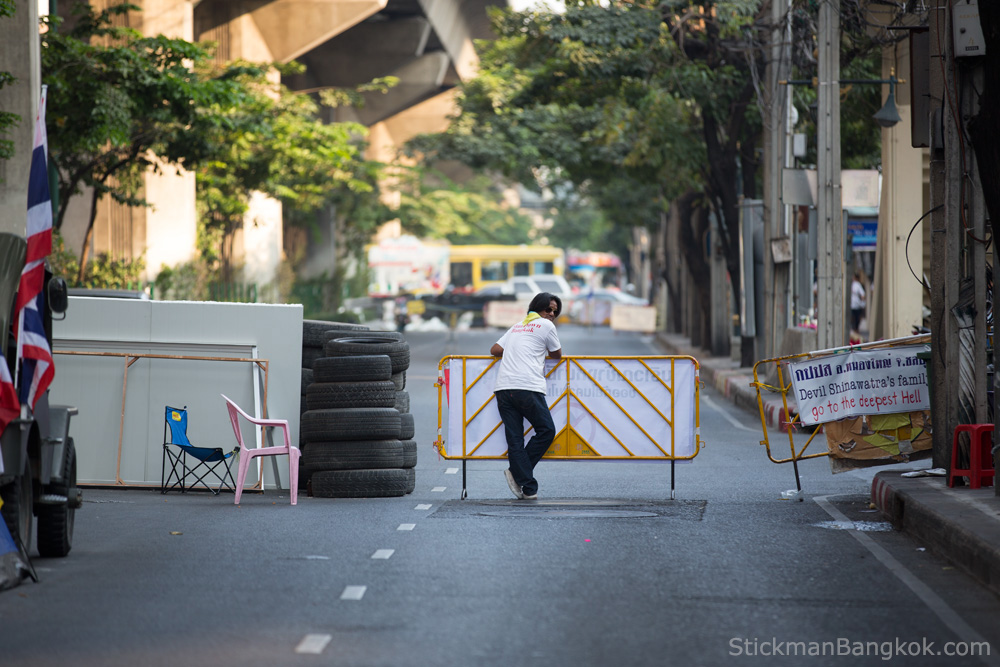 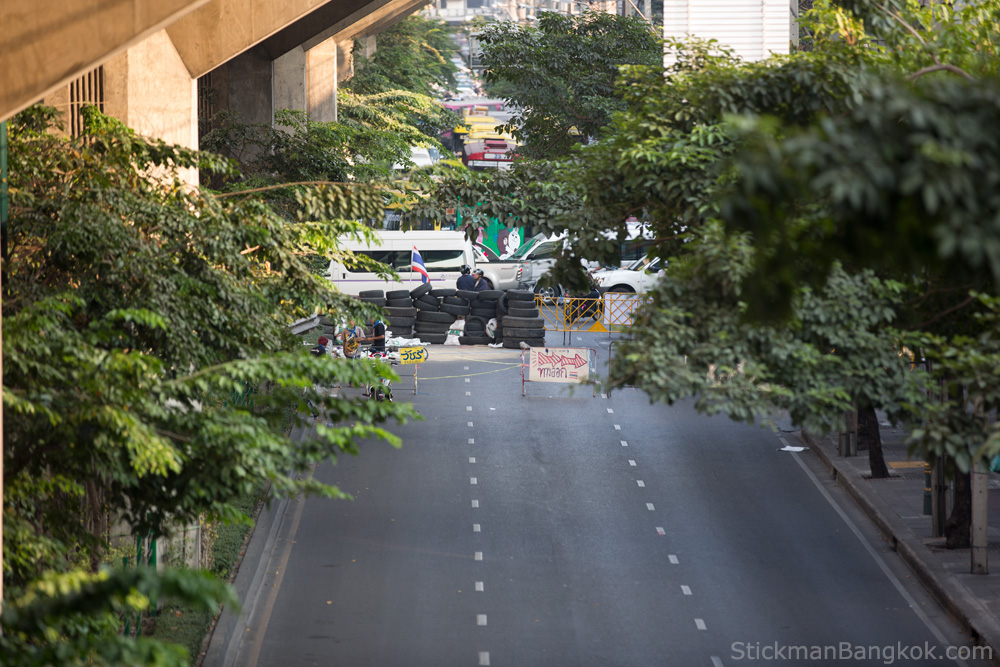 This is the outer barrier, set up at the mouth of Sukhumvit soi 20. Any traffic coming along Sukhumvit Road cannot get to soi 18, soi 16 or the Asoke intersection.

Yes, this is Sukhumvit Road, the main artery that at times I think should be renamed Farang Road, for it's where you'll find more Caucasians in Bangkok than anywhere else. And look how quiet it is. This is downtown Bangkok and after the roadblock there is nothing. If you look closely at the top of the photo you can see streams of traffic backed up… 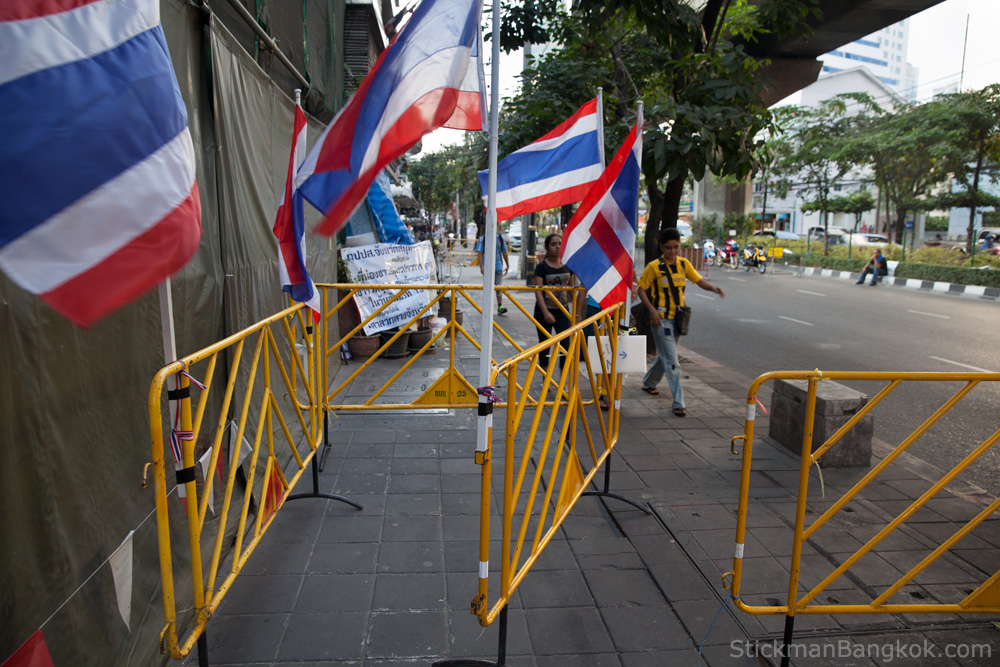 At most barriers there are two channels, an entrance and an exit which makes it easy for guards to check people coming in. There are signs in Thai, sometimes in English, pointing which way you're supposed to go and just like when passing through an airport, you'll be barked at if you go the wrong way. But unlike at an airport, security here does not wear uniforms, they may not speak English and you most certainly don't have any rights! 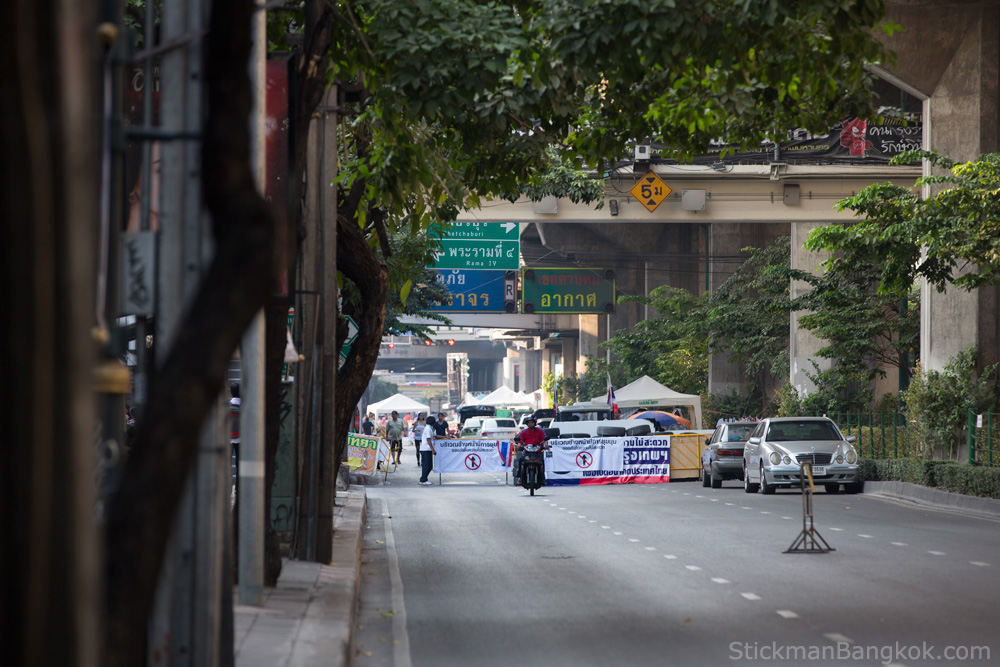 Looking back towards the middle barrier, a motorbike has been allowed to pass as he is exiting the protest are. 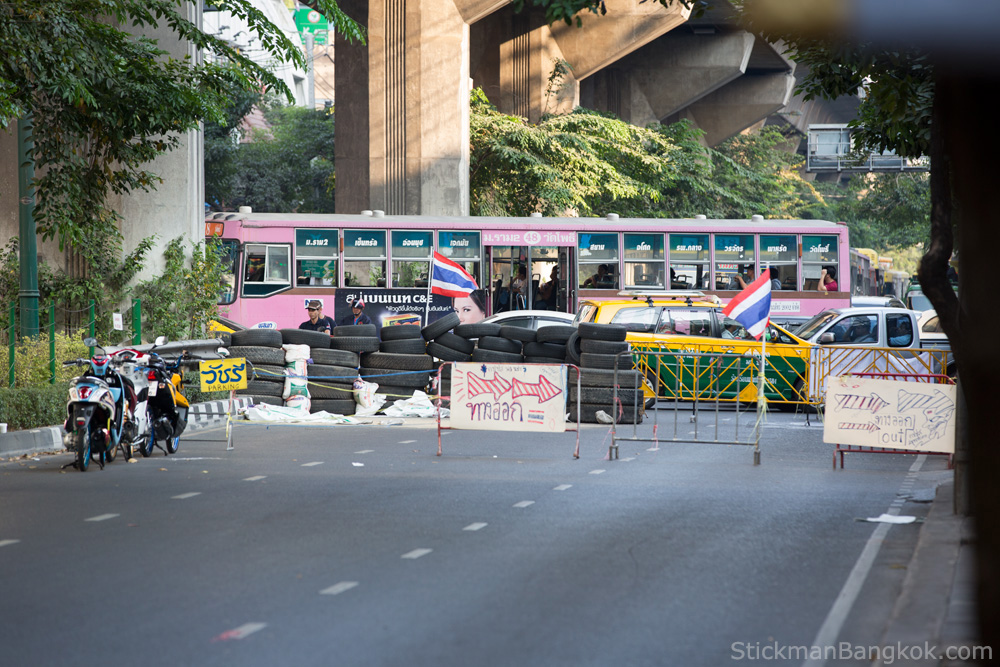 Closer to the outer barrier at the eastern end, vehicles heading west along Sukhumvit i.e. from Emporium towards Asoke, are forced to either turn left in to Sukhumvit soi 20 or do a u-turn and go back the way they came. 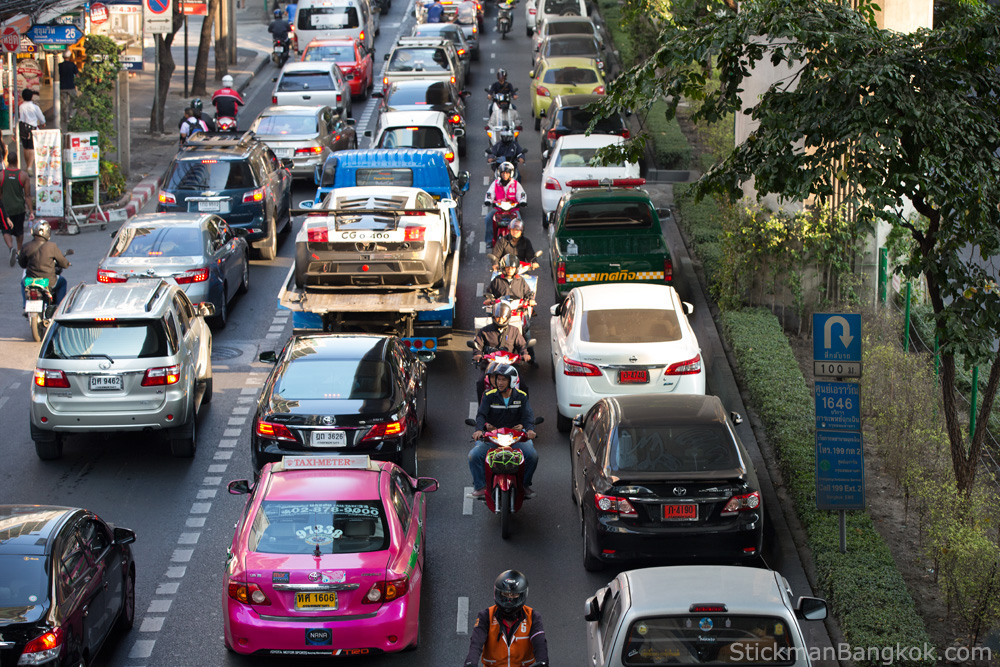 No, this is not trick photography or some special Photoshop trick. What you see is exactly what I saw. Cars are moving in one direction and motorbikes are riding in the other! The traffic in some parts of the city has been so messed up that the rules of the road seem not to exist.

* Not of relevance to the protests at all, but that's a racing Lamborghini decked out in advertising decals on the back of a trailer in the middle lane. 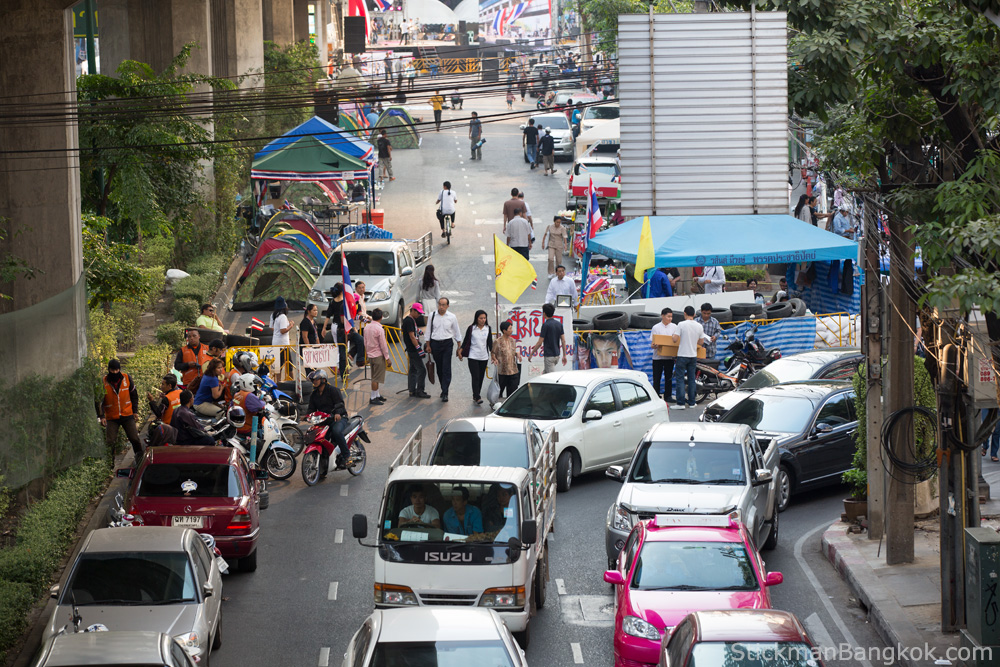 Here I am heading back towards the Asoke intersection i.e. heading west. This photo was taken from the pedestrian overpass and this checkpoint is at the start of Sukhumvit soi 23 (the soi in which Soi Cowboy is located). 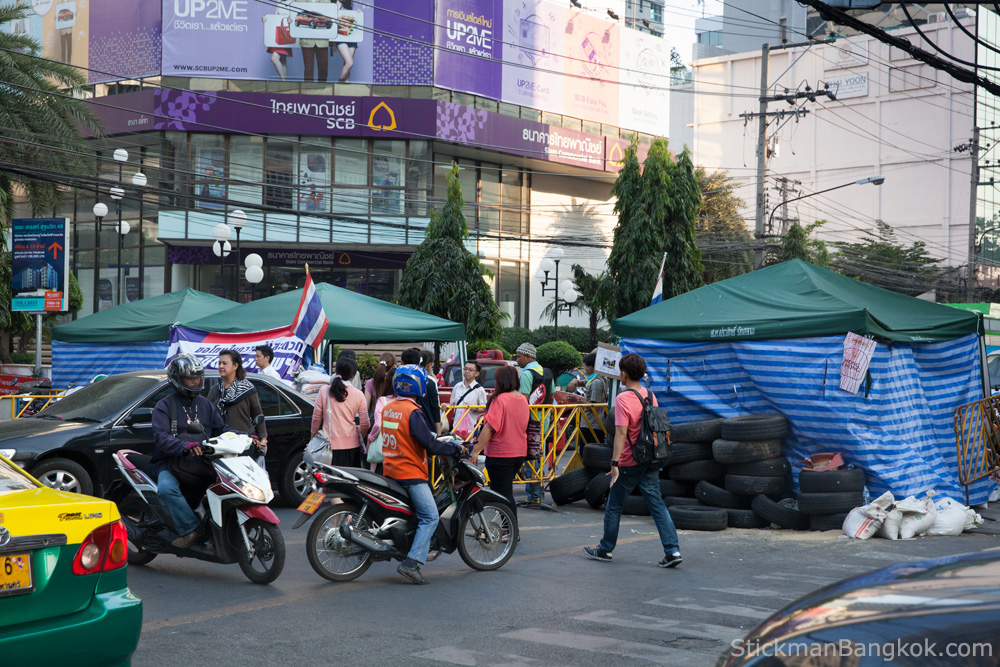 This is the northern gate, about 500 metres up Rachadapisek Road from Asoke. I had to take this photo and the next at a distance as the guards wouldn't let me take photos any closer. Actually, I don't think they were too happy about me taking any photos, period. 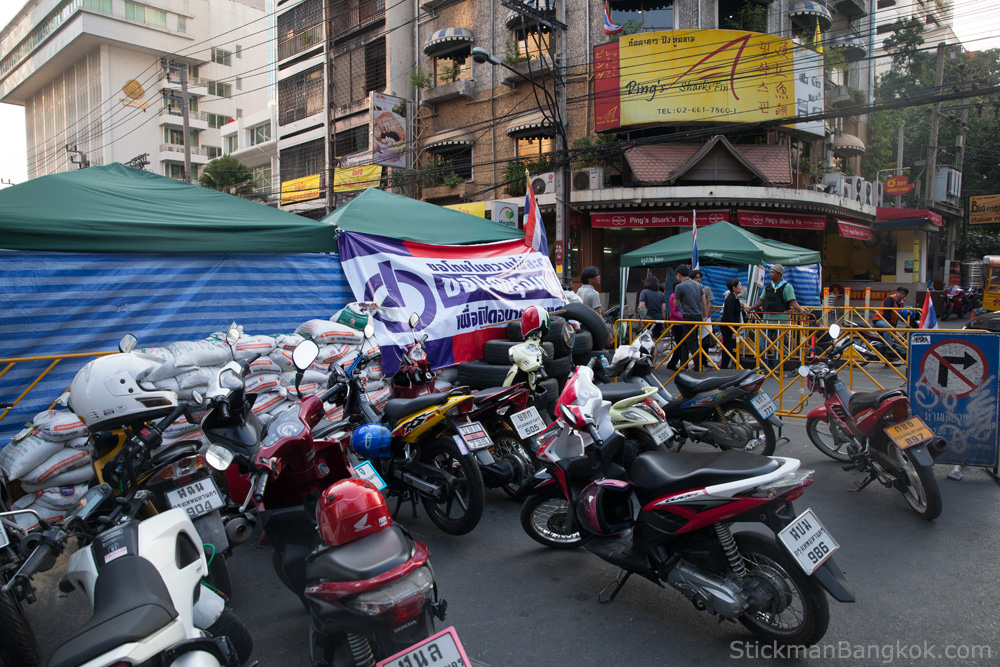 Another angle of the same checkpoint / barrier. There is another barrier a couple of hundred metres closer to Asoke. The barriers are fortified with tyres and sandbags and appear to have been erected to slow down an attacking force. 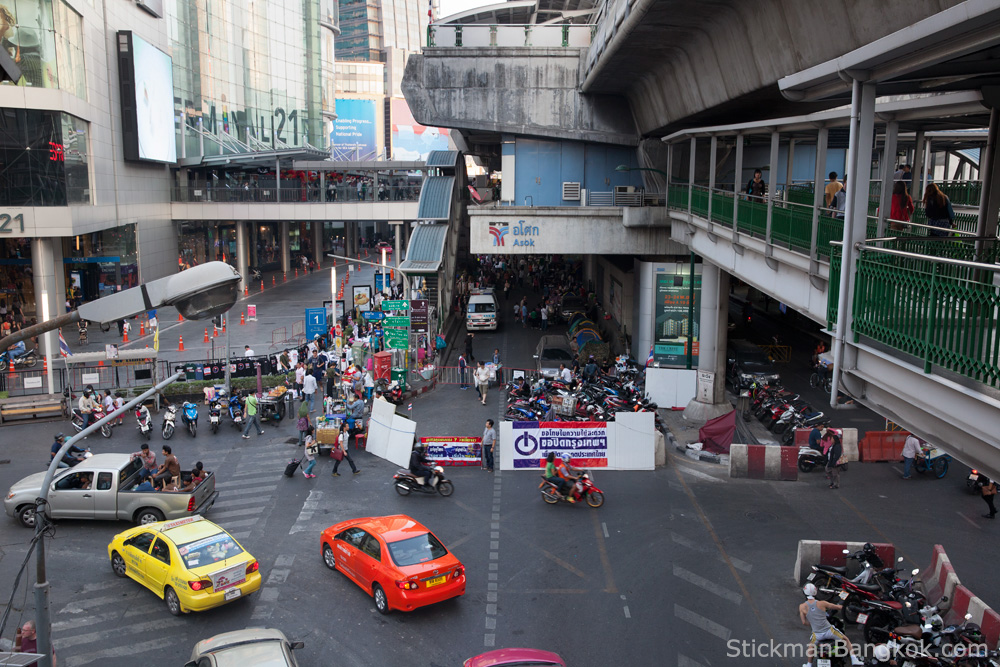 This is the barrier at the western end of the Asoke intersection, near Terminal 21, at the mouth of Sukhumvit soi 19. 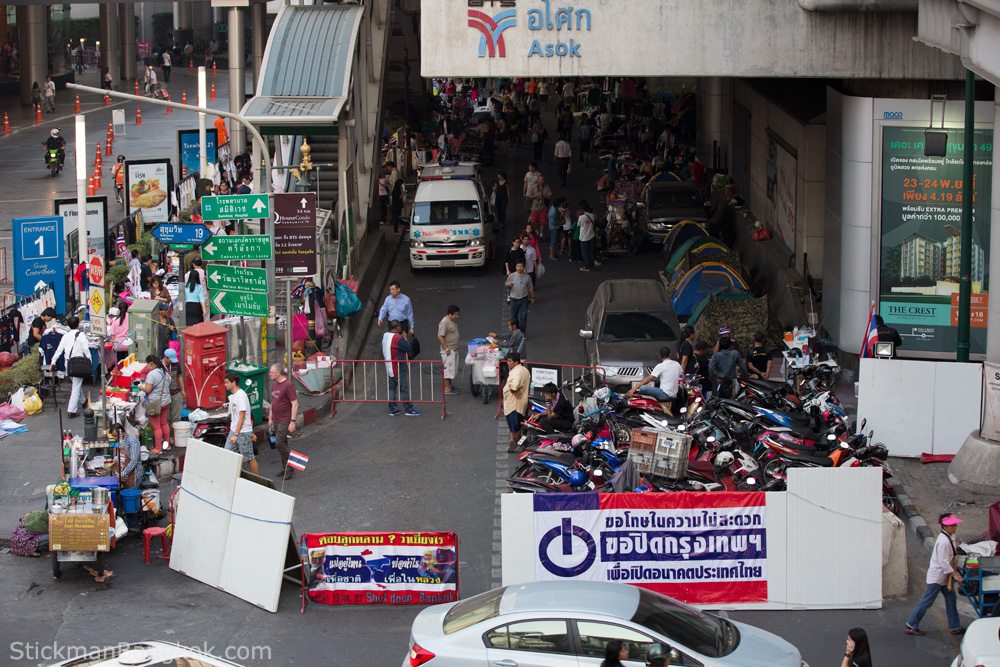 A closer look at the outer gate under the Asoke BTS station.

Now you might think I am being unreasonably harsh on the guards. Just today I see in the news that a Thai lady has filed a complaint with Patumwan police that a guard at the Patumwan / MBK protest site stole 50,000 baht from her bag. I also note comments on Thai social media about these guys that are less than positive. 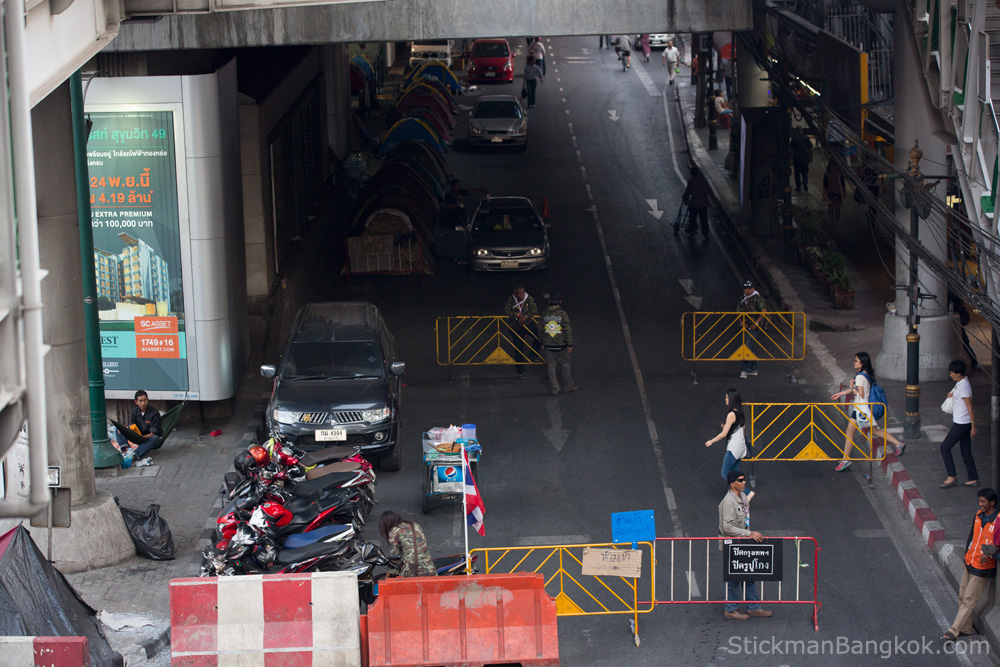 There are 6 guards clearly in shot and plenty just out of shot. At night there will be many more.

To my eyes, the number of guards has increased 3 or 4-fold since the shutdown began. And where the checkpoints were once makeshift, now they are more official-looking and feature multiple layers. At some checkpoints, at certain times of the day, there can be a dozen guards or more. Often they are just milling around seemingly in their own little world, but you just know if there was a problem, or something kicked off, they would be in boots and all. And that is a real worry. There were photos in the mainstream press this past weekend of what happened to someone at a polling station who merely wished to vote and was set upon with graphic photos of the incident. Their stern looks and serious demeanour won't win any charm contest. And neither do they instill confidence. Point a camera in their direction and they pull a face like Mike Tyson. Thugs patrolling, or is that controlling, major intersections in the capital doesn't feel right. And if the worst happens and you have a problem, what are you going to do? Don't expect the boys in brown to come running to help you. This is one reason why 46 embassies currently have warnings about travel to Bangkok at this time, and why many expressly warn their citizens to avoid protest sites.


As to the million baht question about whether one should visit at this time, I refer to my closing comments in the last weekly column which are as relevant now as when I wrote them:

As to whether one should visit Bangkok at this time, that's a question I'm not prepared to answer because we all have different tolerance levels. But what I will say is this. I have not heard from anyone who has visited Bangkok in the past 2 weeks who feels they made the wrong decision to visit at this time. I have not heard from anyone who feels the inconvenience suffered was such that they regretted visiting.