Fed Up With The Bangkok Shutdown

Protester numbers are dwindling, business owners are hurting and now even those who support the movement are joining their opponents and the many expats who are fed up with the ongoing Bangkok protests. 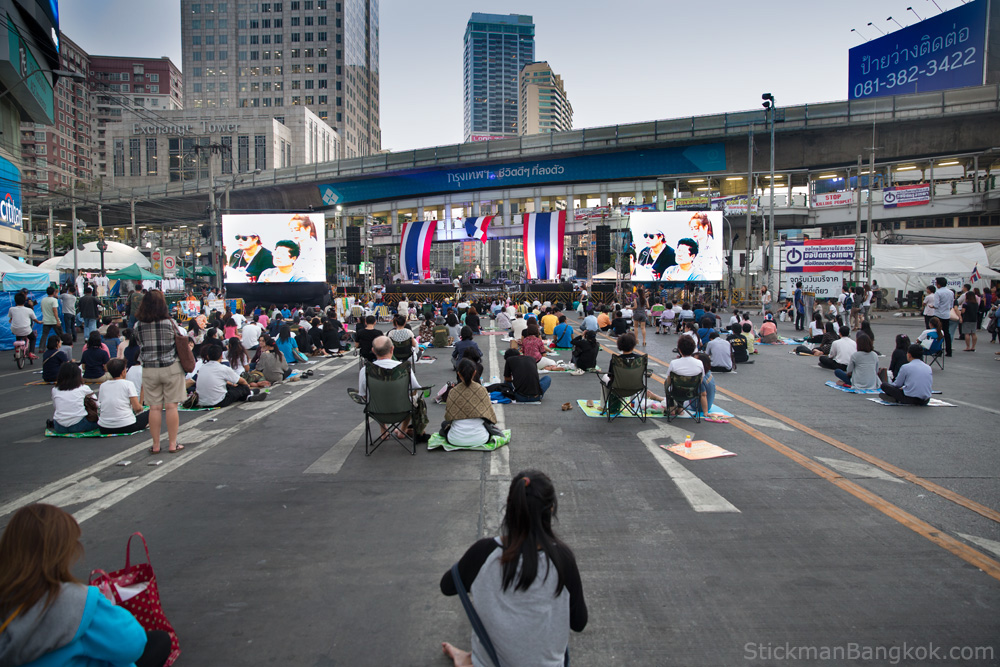 At 6:25 PM, well after offices had emptied out and with the next day a public holiday, the turnout of protesters at the Asoke protest site was poor, continuing a trend that has seen protester numbers drop right off. 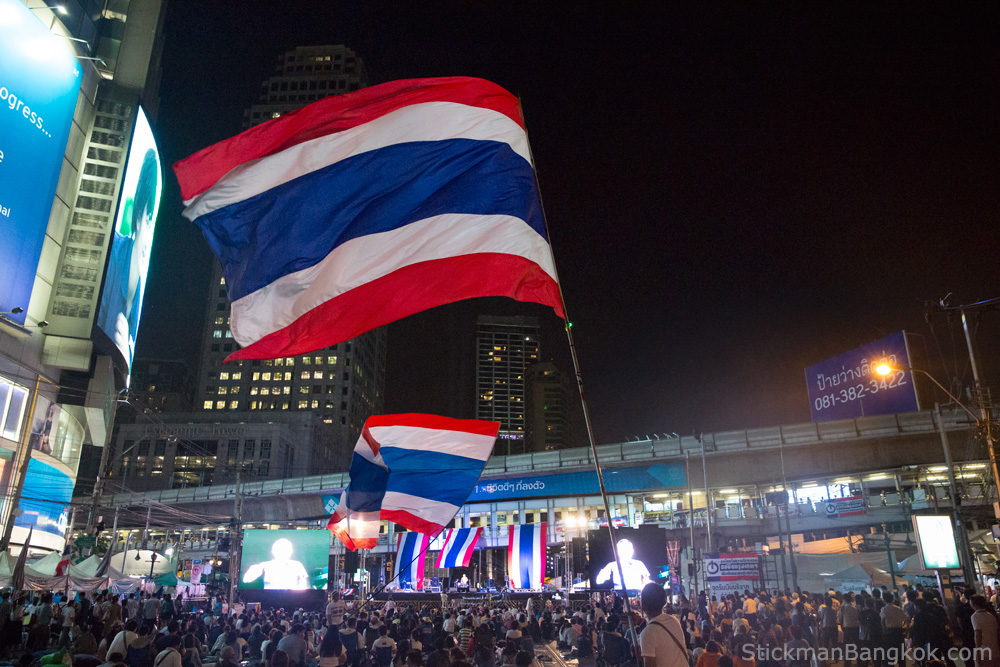 As the sun fell below the horizon and the night sky turned dark, dribs and drabs ambled along to join the die-hards. But there can be no question that the number of protesters at the Asoke protest site is well down from the peak of the first week when
the area was packed every night. Don't let this photo fool you – the perspective is deceptive – there really weren't that many more people in the area than in the first photo taken an hour earlier. 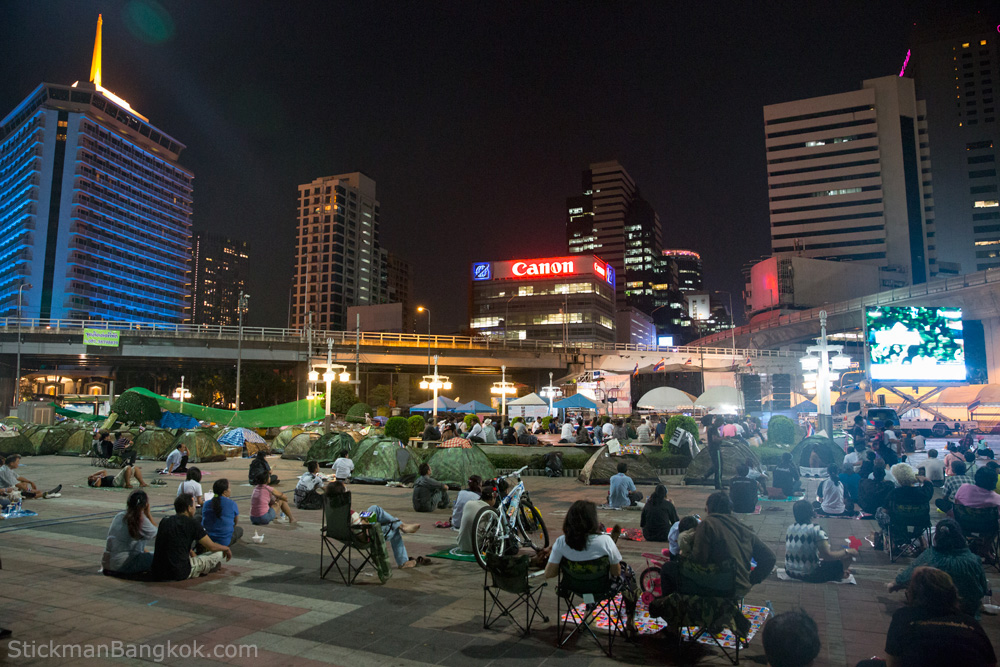 And it was little different down at Lumpini Park, the protest site where protesters from the dismantled Lad Prao and Victory Monument sites joined their compatriots more than a week ago. There may have even been fewer protesters at Lumpini than at Asoke
– and that's saying something because Asoke, while not deserted, was quiet!

There are plenty of tents set up at Lumpini, but then I found myself wondering….could this be smoke and mirrors? Is it possible that there might be more tents pitched than there are protesters in the area?! 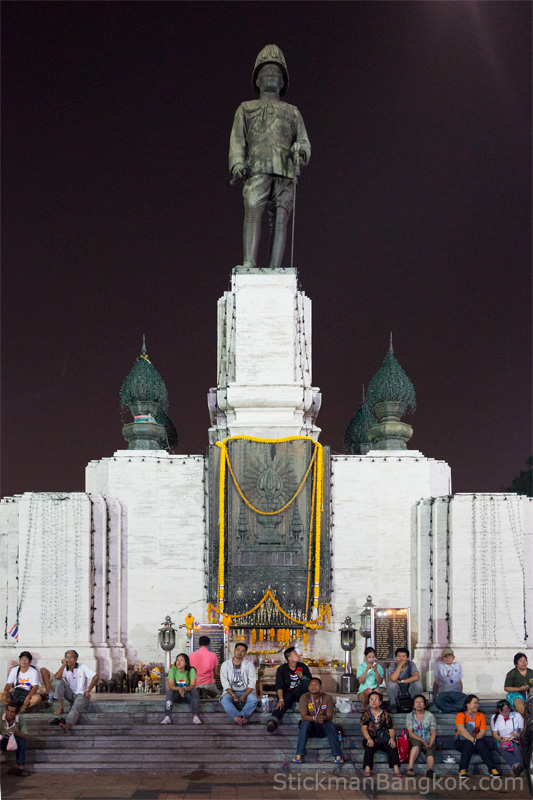 Not only were the numbers down, I detected a sense of boredom amongst the faithful. Fatigue has well and truly set in and there was none of the excitement or energy that marked the first 10 or so days of the protests. Whistles are blown
with a complete lack of enthusiasm and often only when prompted to do so by the speakers on stage.

From around the middle of the second week the trend has been fewer protesters, less energy and now there is almost an atmosphere of indifference. The movement's leader, Suthep, remains upbeat and makes every effort to motivate the troops,
but the passion that was evident a month ago just doesn't seem to be there now. Has the spark gone? 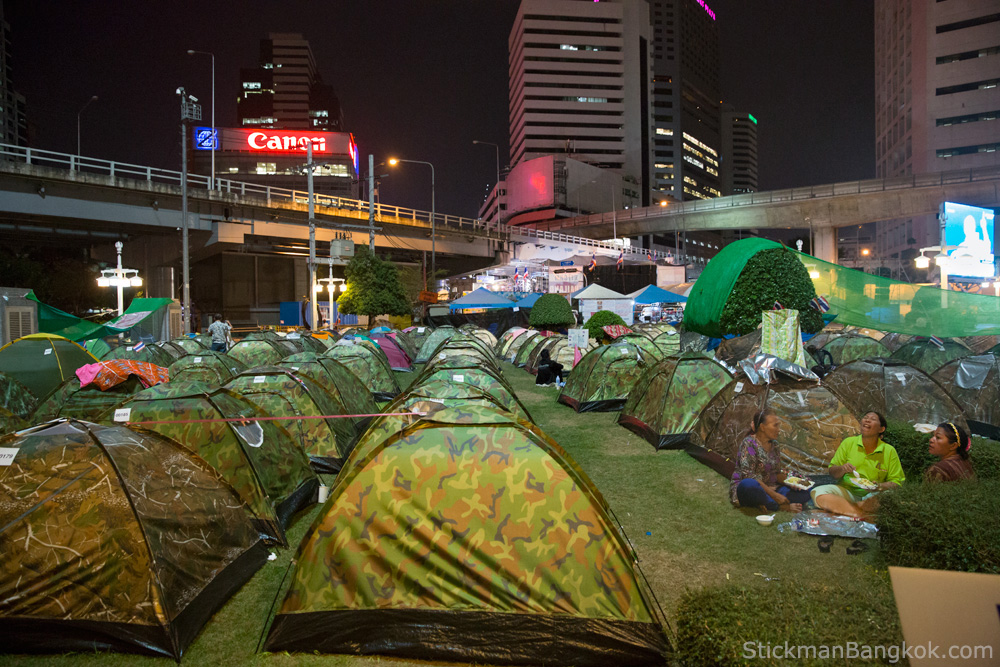 Later in the evening, a few dozen protesters sit in front of a large LED screen at the intersection of Rama 4 and Silom Roads watching a broadcast from another protest site. The days of each site having its own guest speakers have passed and some sites
get but a broadcast of speakers from other sites. Whenever Suthep speaks the other sites take the feed, but where each site previously had its own speakers and / or entertainment well in to the night, that doesn't seem to be the case any
longer. How can you put a new spin in the same old story that has been told over and over and over again? 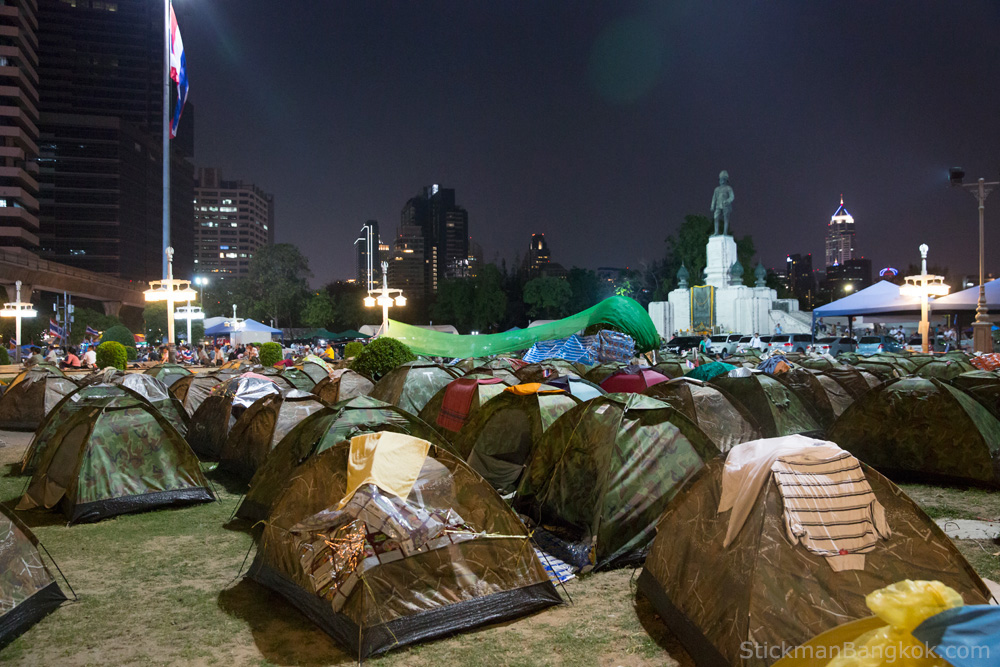 I wouldn't like to estimate numbers, but they have fallen, I mean really fallen.

Many protesters can be seen hanging out around the tents, seemingly disinterested. I cannot imagine what it's like at the protest sites to hear the same message repeated ad nauseum. When roaming I have sometimes wished I couldn't understand
Thai or I could somehow block the message out.

There seem to be three types of protesters left. Young children haven't been a feature since the grenade attacks at Victory Monument and where there was a sprinkling of foreigners in the crowd they too are now absent.

There are the office workers, for the most part Bangkok middle or upper class, who venture to the protest sites after work or at the weekend, in ever dwindling numbers. Questions have been asked of this lot's staying power – and the answer is here
– they don't appear to be willing to go the distance.

Next are the out of towners, most of whom are aged and who it has to be said, many of whom seem awfully bored. Their number has also fallen and presumably they have drifted back home.

Finally, you have the hardcore, or for want of a better word, the extremists. Amongst them are those who speak regularly on stage, as well as those who have been present at the protests since the beginning. I'd also include the guards in their number.
It's hard to say how many they comprise, but they are the drivers, those pushing the movement. My feeling is that there are not that many of them. Hundreds? A few thousand at most, I would guess.

In the early days of the protests there was much crowd participation. Now the crowds look more like churchgoers listening to the most boring sermon.

Where this is all going, I have no idea. The calls are getting louder for talks to be held between the protesters and the government to get beyond the current impasse. With every passing day the damage mounts, to the tourism industry, to businesses in
the area, the flow on effect to other businesses, to damage to the country's reputation and so much more. But the protesters are unwilling to sit down at the table.

Despite weeks of people shouting slogans, ranting and ruining businesses, everything is still status quo. The worrying thing of course is that the backers have not seen a single baht ROI… 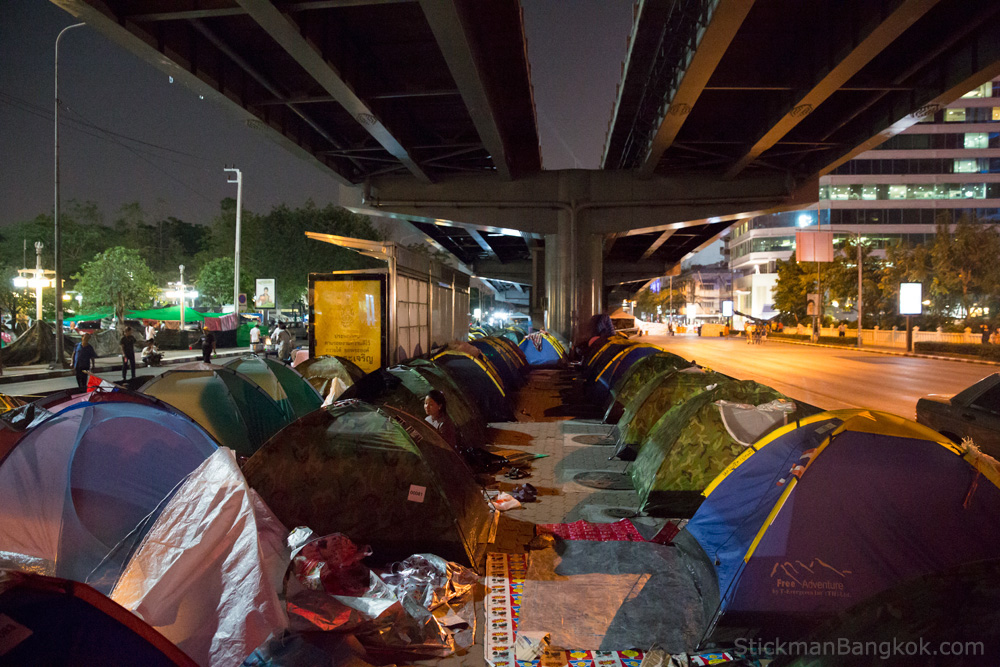 Where before I cautioned against visiting Bangkok at this time, I'd have to say that my attitude has softened. The protesters lack the intensity they had a month ago. Yes, there remains a danger – albeit a very small danger – that you might get caught
up in something nasty.

Grenades have been thrown, bullets fired and people killed. And yes, this could happen again – and it could be worse.

There also remains a very real chance that visitors be inconvenienced by the protest sites and getting around town, especially to or from one's hotel by public transport, may be challenging. And there are some hotels near protest sites where it might
be difficult to escape the monotonous rhetoric from the loudspeakers which starts early and goes until late.

For naughty boys, the vibe is not quite the same in the nightlife industry, although with that said there are lots of ladies keen to make some money.

The one piece of advice I'd give to anyone considering visiting Bangkok at this time would be to choose a hotel located at least 500 metres away from a protest site. That way, with a bit of luck, you should avoid major inconvenience.

Now I see Thais who have supported what the protesters stand for now openly saying that they want the protests to end and a sense of normality return. Yeah, there is a sense that many, regardless of which side of the political spectrum they sit, are fed
up with the disruption.