I knew something was up when they closed the Siam Square skytrain station just as we were about to buy tickets.

We taxied to the Samyan skytrain station and I knew it was getting serious when we heard announcements that the station had just been closed.

And I knew all hell had broken loose when my phone wouldn't stop beeping.

Thing escalated further in the political crisis in Thailand tonight when some bombs went off at Sala Daeng skytrain station. The mainstream press is reporting 3 deaths and close to a hundred injured, some serious.

My date had to be put in a cab – and finding one became a nightmare, before I could make a beeline for the top of Silom.

We'd been in Siam Square where I hadn't been in a few days and I just did not realise that the area had also become something of a makeshift red shirt camp. Not quite the fortress that the area opposite Silom is, but they've erected makeshift gates in the same style. The area which the red shirts have made their home has expanded most of the way to the Patumwan intersection. 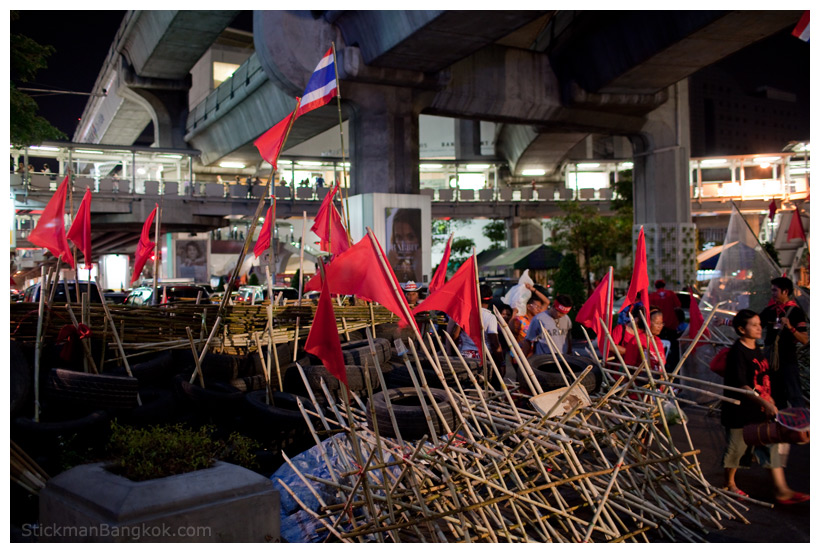 The entire area outside of Siam Paragon resembles a red shirt village. Pretty much all of the vendors seem to be red shirt members / supporters and wherever you look there are red shirt services, from free food and drink to massage to vendors selling all of the red shirt paraphernalia. Every little bit of space is being utilised. 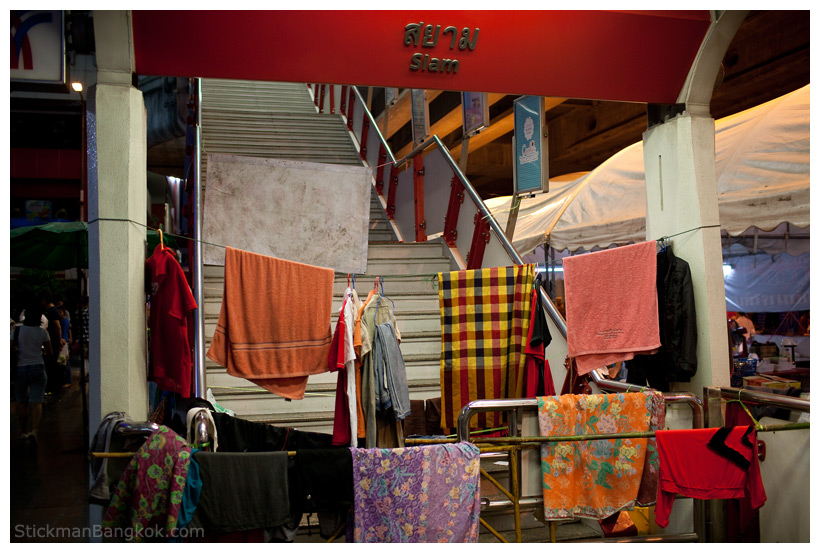 It took an eternity to get my date in a taxi, drivers asking a whopping 5 – 10 times the usual fare, refusing to turn on the meter for farang and Thai alike.

After finally getting my date into a cab, I now had to get to Silom.

I tried a tuktuk and when I said my destination was Silom, all three refused. The usual price should have been 50 baht or so. I offered 100 baht. They said they wouldn't do it for 1,000!

A guy with a motorbike was standing nearby and he said he was going home that way and that I was welcome to jump on the back. I took him on hi offer. He dropped me off in the middle of the action, right slap at the Rama 4 / Silom intersection.

I leapt off the bike to a cacophony of sounds around me. On my left the red shirts were in full party mode, music was blaring, joyous singing and cheering overpowering the chanting and jeering from my right, Silom Road, where the multi-coloured shirts, the nickname given to those who support the government and / or oppose the red shirts were chanting for the red shirts to go home! 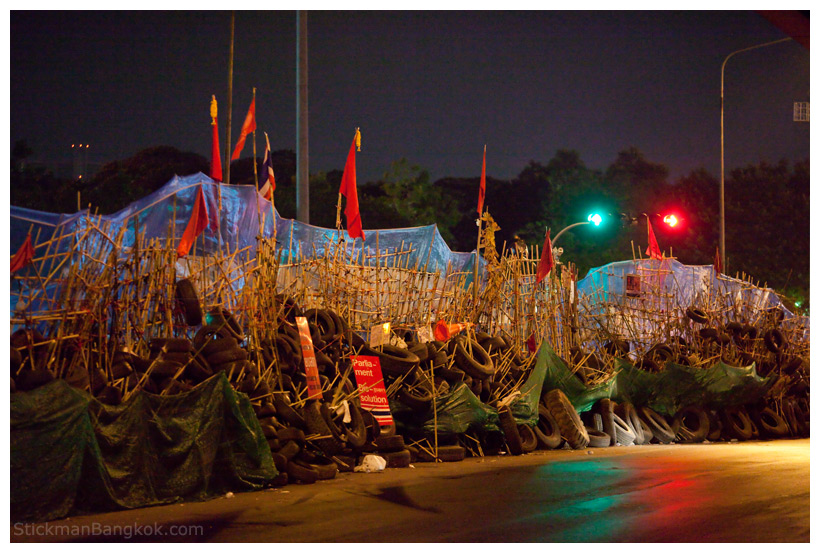 I couldn’t see any red shirts. I could hear them all right, but they were well behind the lines of their barricades, not a single red shirt to be seen, not a single guard on duty. As best I could make out they had fortified the fort further, the height increased which would make access to the area more difficult.

On either side of the road were policemen, hundreds and hundreds of policemen. Some were standing relaxed, others crouched down behind their riot shields. 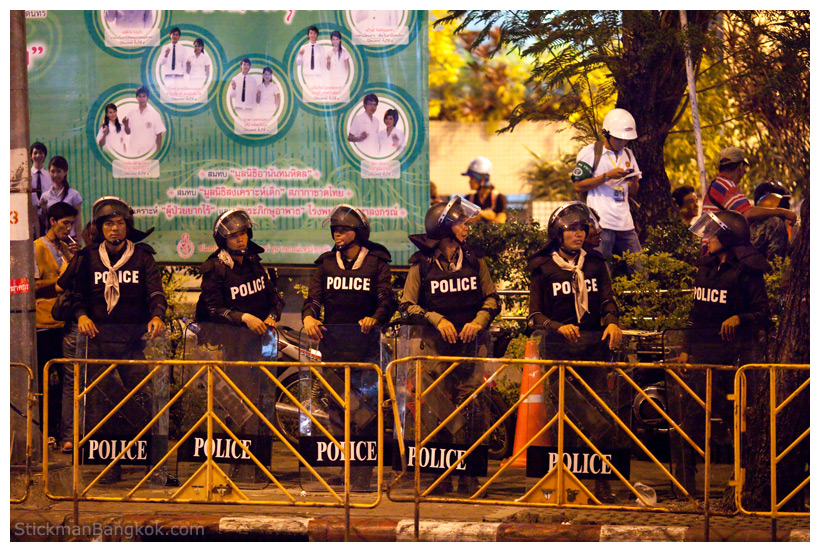 I found myself in a really unusual position. I was under the overpass at the Silom / Rama 4 Road intersection. On either side of the street was hundreds, and I mean hundreds, of cops in riot gear. In the middle of Rama 4 Road, in the area where pedestrians can wait to cross the other half of the street were coppers of serious rank.

The reds were partying, screaming, yahooing with music blaring and those lanterns that they fly in the north at special holidays like Loy Kratong were being sent into the sky. Fireworks were lit and were lighting the sky up and making huge explosions, highly perturbing given that everyone knew that a bunch of grenades had gone off in this very area! 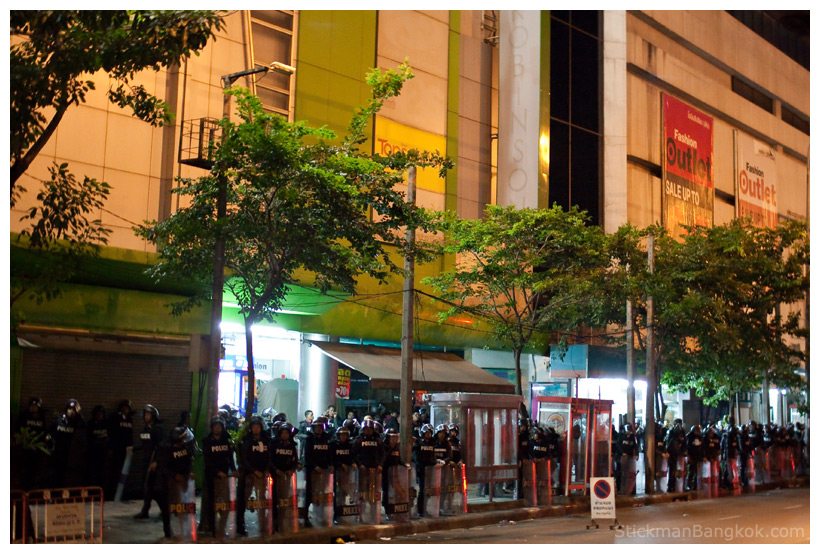 While Silom Road had been sealed off from the Rama 4 intersection down to Narathiwat Road, traffic was still passing by Rama 4 Road, despite the high tension in the area. There were police vehicles blocking the top of Silom Road and parked around the area under the underpass. 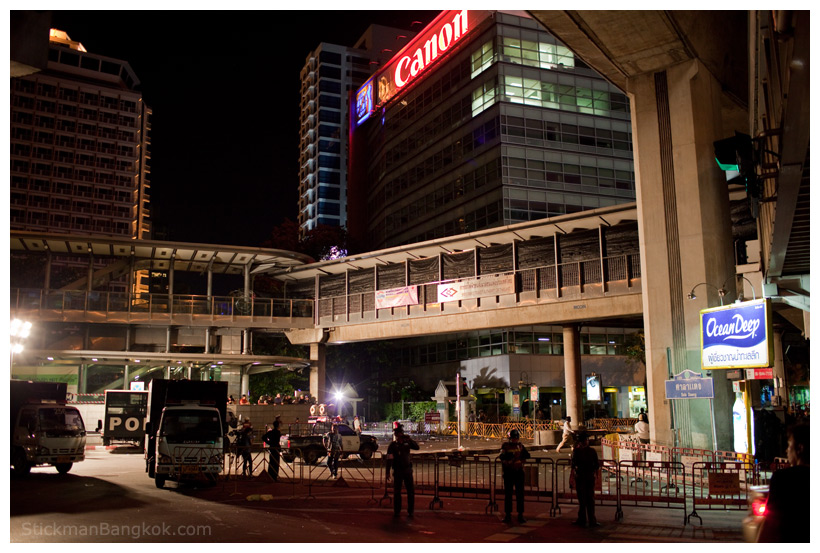 The area was smothered with police but they were holding back. I guess with it being nightfall there was little they could do but adopt a defensive position.

I hung around in that spot for a while, incredulous at the ease with which it was to enter the scene where a serious crime had occurred, entering the area without being challenged by anyone. The motorbike had dropped me off right in the thick of it! Occasionally a press photographer would dash from one side of the road to the middle, and then to the middle to the other side. They were scurrying, head down. This was the real thing.

After firing off a few shots, I crossed over to the Silom side where there was a mass of people – police, press, civilians and a growing number of those who oppose the red shirts. 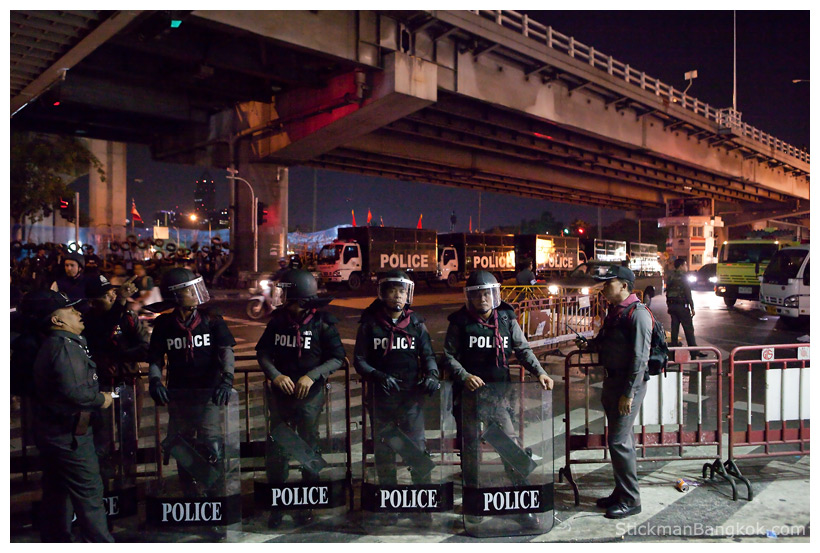 The cops at the top of Silom, especially those in riot gear, looked really concerned. They have to be contenders for Thailand's most unenviable job.

Walking down Silom Road the barbed wire barricades that had been in place over just the pavements had been pulled all the way across the road. A more defensive position had been taken. 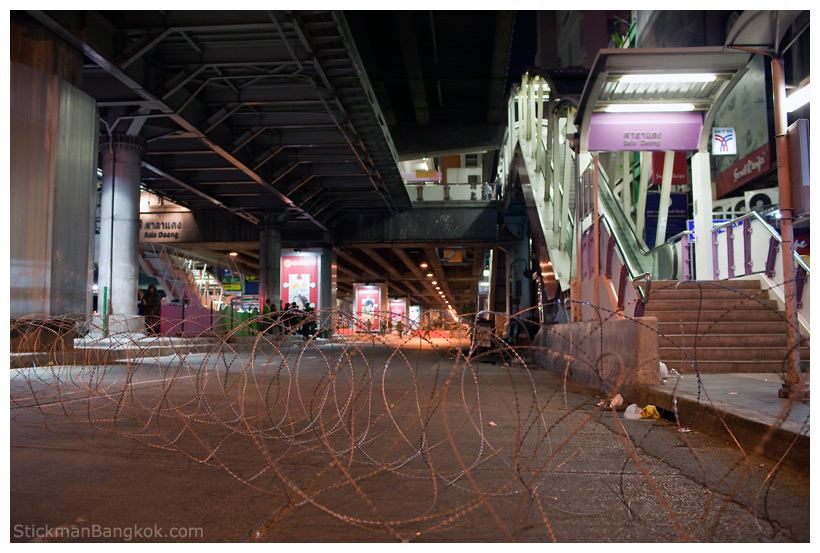 As there was no direct threat at this time you could still pass. Soldiers were everywhere and in serious numbers. 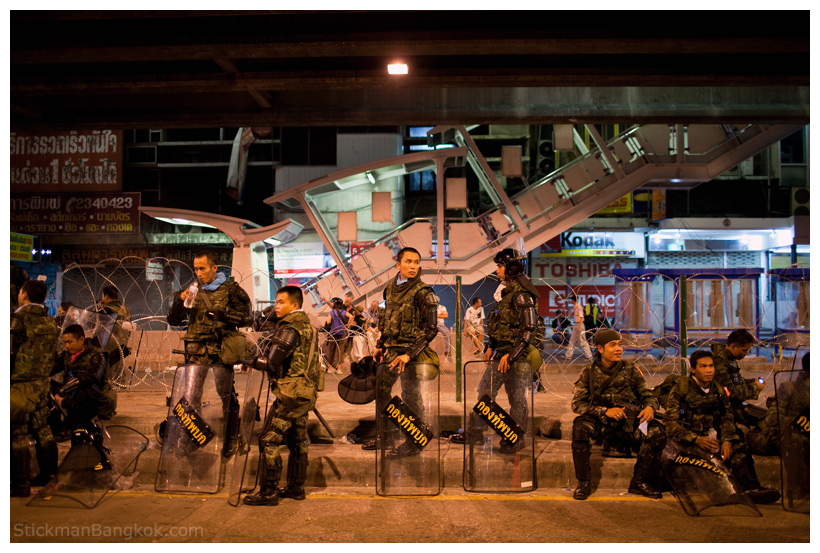 There was no real sign of what had happened an hour or two earlier, at least not at street level. There was much more rubbish on the ground than you usually see, possibly a sign that people had dropped whatever they had had in their hands and run.

The only sign of damage I saw was a broken window at the Au Bon Pain branch towards the top of Silom Road where there was also a little blood on the ground. Other than that, there were no other physical signs of what had happened, at least as best as I could see. 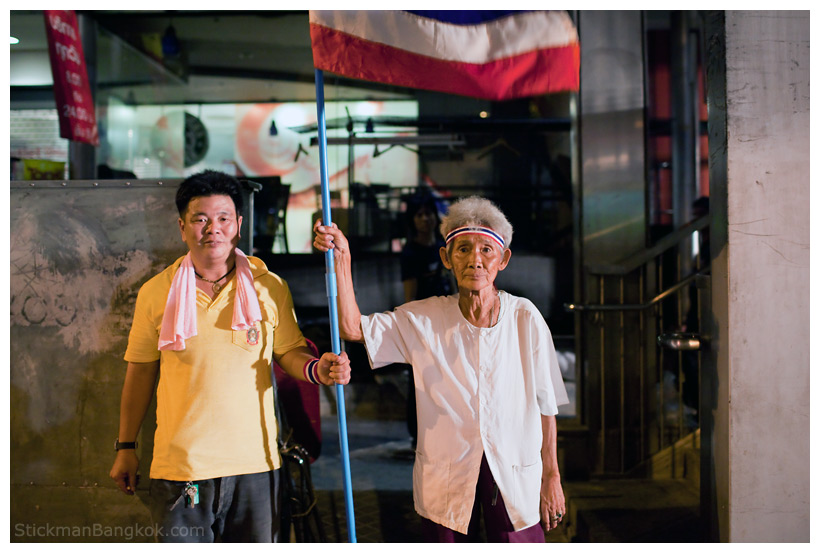 Shortly afterwards perhaps a hundred or so anti-red shirt protestors marched up Silom Road, led by the lady in the photo above. They were ranting and raving about the red shirts, imploring them to leave and go home. This group appeared to have no weapons of any sort but they charged up the road like a group possessed with a mission to carry out.

One of the interesting things about this week is that the police and the military have not prevented anyone from going anywhere. They have set up road blocks in strategic positions but if you are an average Joe Blow you are given free passage and not challenged in anyway.

I waited for perhaps 10 minutes and then proceeded from under the Sala Daeng station, where many troops were stationed, and where it felt safe, back up towards the main Silom / Rama 4 intersection. A British photojournalist I had chatted with earlier was running back down Silom Road and implored me not to go any further. I didn't listen, but I should have.

As I got further up the road it was clear that the group had marched up had tried to take on the red shirts. I heard some noises I would rather didn't stay in my memory. I heard blood curdling screams. I heard what sounded like gun shots. I heard fighting. And then I did the sensible thing and turned around. And I ran. I ran all the way back down to the relative sanctity underneath the Sala Daeng station.

And there under the scene of the first explosion, a British photojournalist, a Kiwi columnist, a British publican and a Danish TV presenter compared notes. 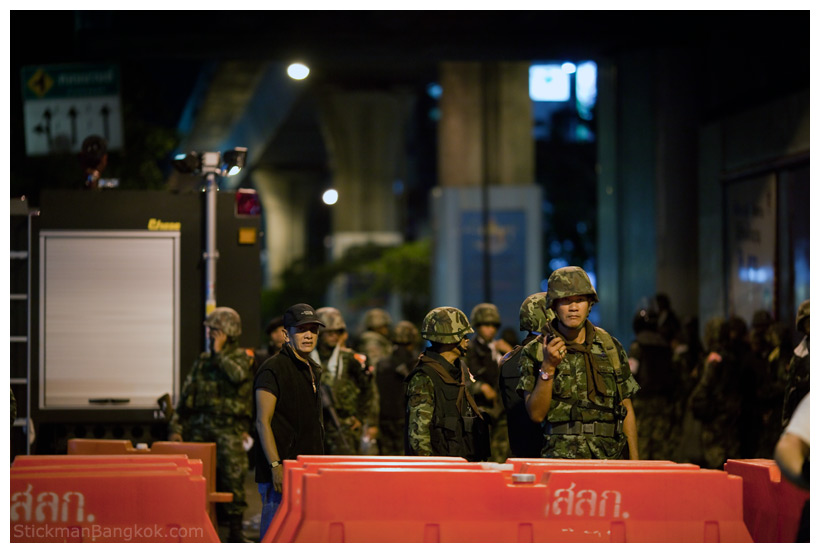 Today’s incident was started when there were explosions at the Sala Daeng skytrain station. Exactly who started it or where the bombs came from, I have no idea. What the ramifications of tonight’s events will be, I don’t like to speculate, but the ante has been upped and no group is showing any sign of backing down.

Silom Road shut down. Everything was closed – all businesses, all convenience stores, all pubs and all shops. Street vendors had long fled by the time I arrived which was about 9 PM. I didn’t stroll through Patpong but when I passed by it seemed that many bars were still going. The night market had either closed, or hadn't opened. Soi Thaniya, the Japanese soi, was lights out completely and in total darkness. 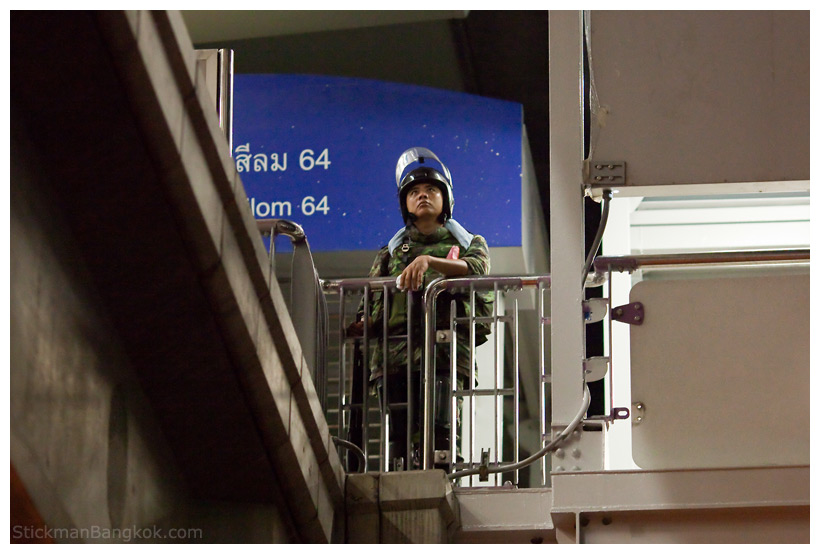 Indications from those I spoke to, including the manager of a popular expat pub in the immediate area, was that they would probably not be open tomorrow.

The skytrain is back to limited service and if it continues to be that way on Friday expect traffic chaos.

Taking a motorbike taxi home, for taxi drivers were still attempting to gouge, asking 5 – 10 times what it would be on the meter, I chatted with the friendly rider. He asked me how long I had been in Thailand and when I replied he said quite matter of factly, "Oh, so you must be used to all of this already. It has happened before and it will happen again…"