Earlier today I wandered around Silom Road and ventured across to the red shirt area on Rajadamri Road, just north of Rama 4 Road. I wandered around for a look and to get a feel for things but there wasn't a lot going on. There was the usual ranting over the loud speaker and staring across at the other side of the intersection but not a lot more.

The front part of the area which faces Rama 4 Road was being closed off with a green mesh material erected all the way across the front. They were fortifying the barricades around their encampment when the photo below was taken at about 1 PM. 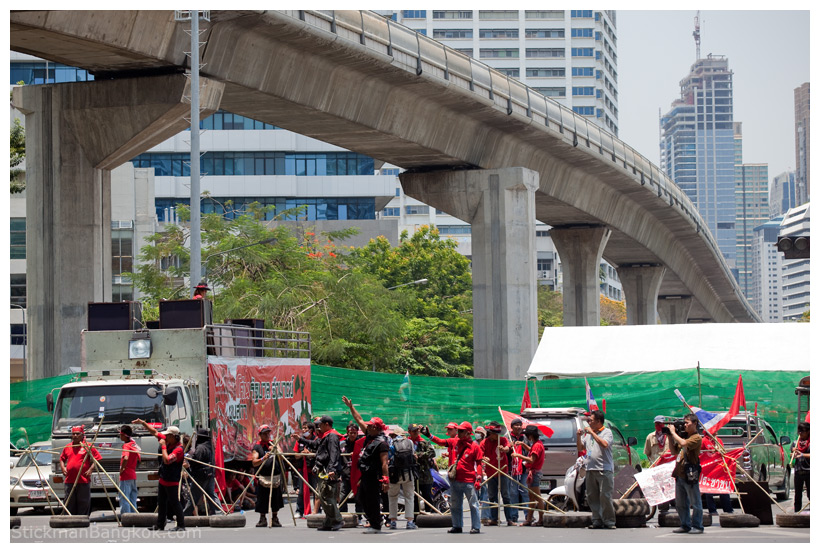 I returned home to process some photos, to post a couple of brief reports of my findings and to take a breather. At that stage I was not sure if I would swing by Silom again in the evening to see what, if anything, had changed.

I've never been one for politics but I find the protest is becoming irresistible and the best, really the only way to follow it, is to be right there so at around 9 PM I returned to Silom, the taxi dropping a friend and I off at the Suriwong Road end of Patpong.

Things had changed markedly at Patpong from the previous night and most nightlife venues were open as were a number of shops. That said, the majority of shops remained closed and the main attraction, the night market, was absent, the middle of the main Patpong soi still in darkness. 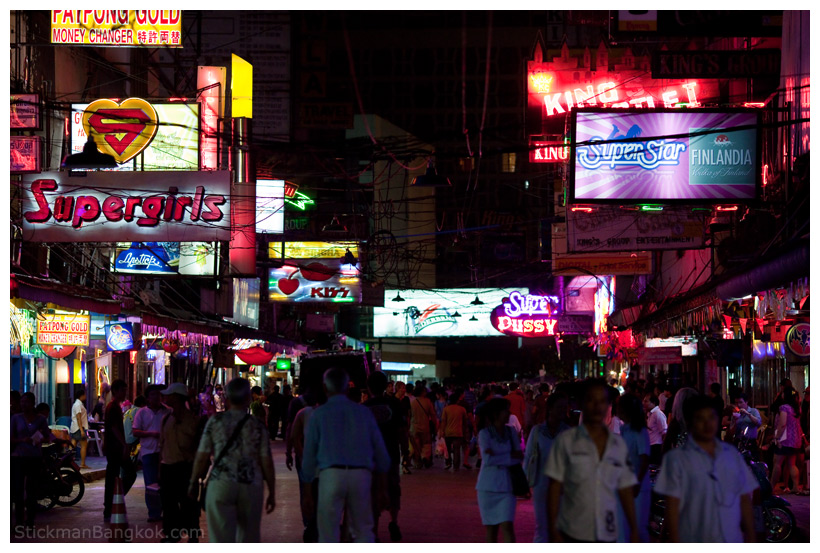 Around both Patpong and Silom fewer soldiers were visible than the previous night as well as earlier in the day. But you just know they are out there, lurking in the shadows. It was also clear that they had taken over the skytrain walkway connecting the Sala Daeng BTS and Silom MRT stations. A black mesh had been draped around much of it and it had been closed to the public.

Up the road we strode and on Silom Road, again, there were fewer soldiers present. We made our way up towards the intersection with Rama 4 Road and toward the area where the reds were camped out. We heard them long before we saw them. They were in full song, pumping out their beloved seua daeng song in unison.

I thought I would see the green strip of mesh around the outside, erected to conceal the view of outsiders. Nothing could have prepared me for the transition of their encampment. 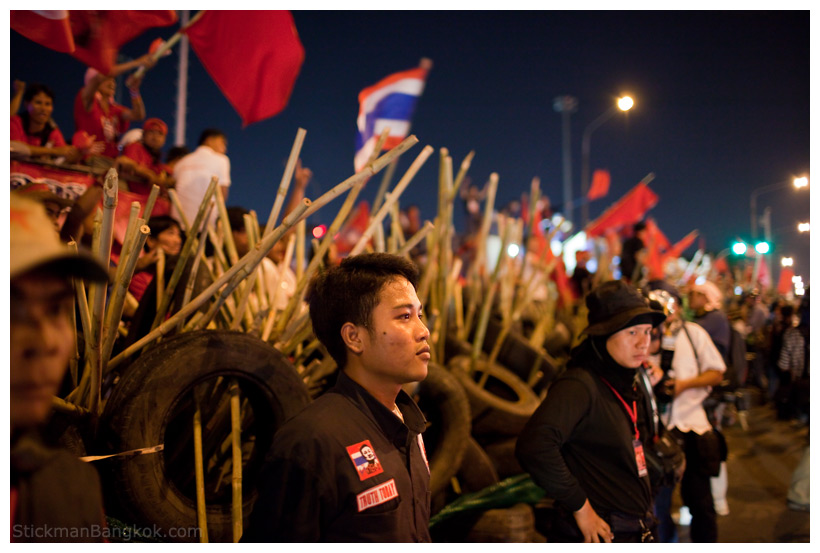 The Rama 4 facing side of the encampment now resembles an old-style Thai fortress, the sort you see in Ayuthaya period Thai movies! The green mesh was wrapped around what appears to be some sort of barbed wire and this is the base below which hundreds of tyres are mounted and tied together with perhaps hundreds or even thousands of bamboo sticks making a front that is largely impenetratable to the average passer by. Out in front of the fortress the area is patrolled by red shirt guards. 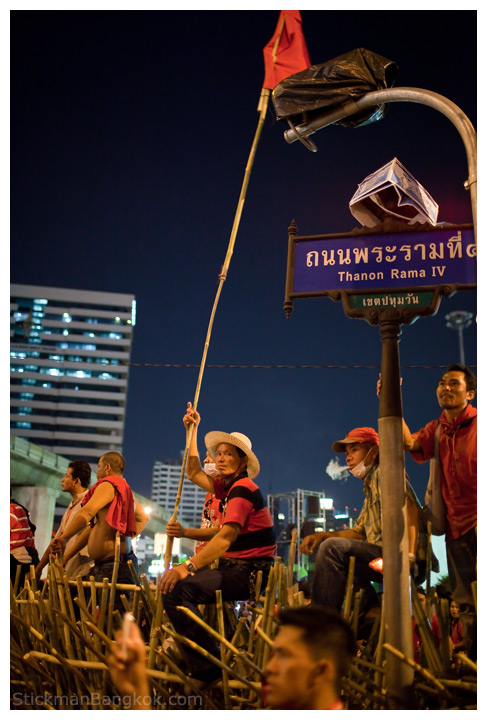 It was nothing like earlier in the day when the area had been open and there were a number of foreigners up closed. We walked along the front of what was no longer now an encampment, but a fortress, from opposite Robinson's at the top of Silom Road, heading east on the northern side of Rama 4 Road.

Opposite the police traffic control booth that sits below the flyover was a small entrance into the fortress that we hadn't noticed. We didn't have any intentions of entering, in fact we didn't think we would even be allowed in, but once the red shirts realised that we were locals they invited us inside, swinging open a door and welcoming us in to their fortress.

The fortress is dominated by men, especially the front area. There are some women and a few children inside, as well as a few monks but for the most part it is men. 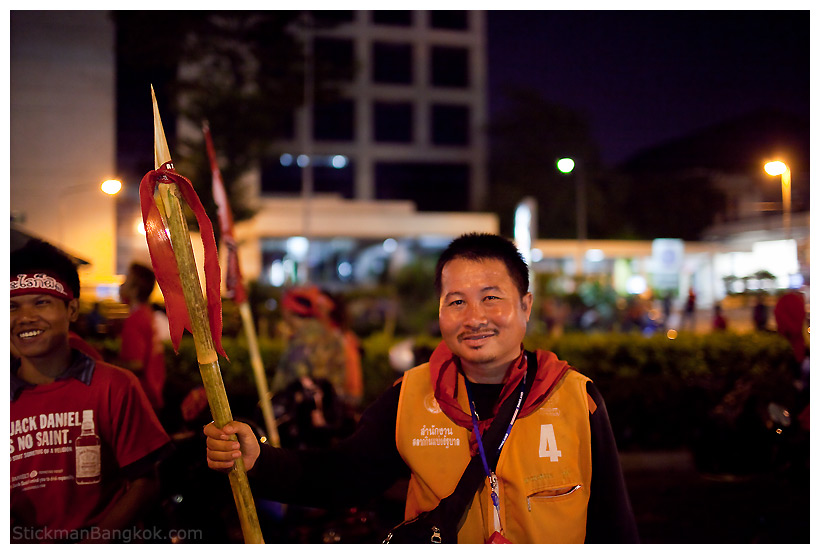 While most seemed to be in positive spirits, there was a tense atmosphere inside. For sure, many reds didn't smile at us and you just knew that some didn't welcome our presence.

As we explored the reds' compound we noticed many men were carrying long bamboo sticks with sharpened edges. I guess that they are going to gril some sausages or perhaps spit roast a pig. I cannot think of any other use for them.

We were beckoned over by some guys whose role it was to sharpen the bamboo sticks. We briefly chatted with them and fired off a few photos. They seemed happy to see us, encouraged us to take their photo and for a moment I felt that they thought we were part of the movement. 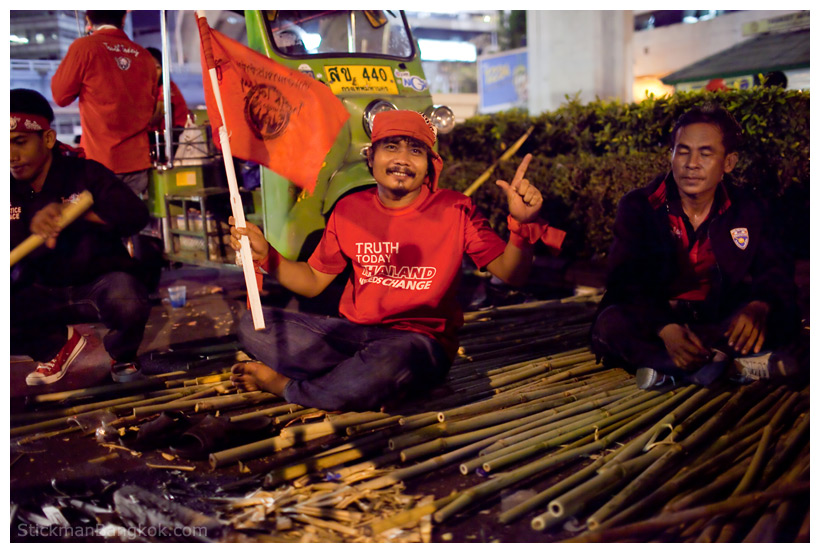 Our entrance had not gone unnoticed and the fellow whose words were being broadcast out over the loudspeaker system made mention of us, in Thai, saying that we need not be concerned or scared. The reds were neither scary nor bad. he said. He went on to say that they always did things the "right way". He then speculated as to whether the photos we were taking would end up in newspapers or on TV in England or the USA and instructed everyone not to be alarmed at the two white boys taking photos! A thousand sets of eyes homed in on us as he gave a running commentary and a few thoughts about our presence. Self-conscious doesn't even half describe how we were feeling for a minute or two.

There were perhaps a couple of thousand people inside. It's really hard to say just how many people there were as the area is quite spread out and there are clusters of people all around. 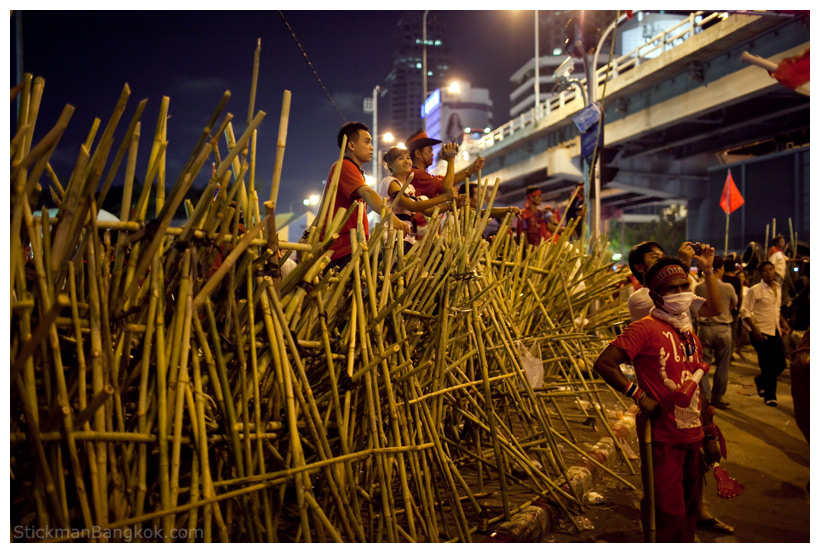 At an individual level, the red shirts inside the fortress were pleasant enough, but it has to be said that some do look scary!

These are hard people who work the land, tough men who have led tough lives. They may have looked mean but in fairness they were polite and friendly. We were approached by a few, some of whom wished to engage us in conversation and in the case of one fellow I could not help but think that he had been sent over to figure out who we were and why we were there although he never asked us directly. 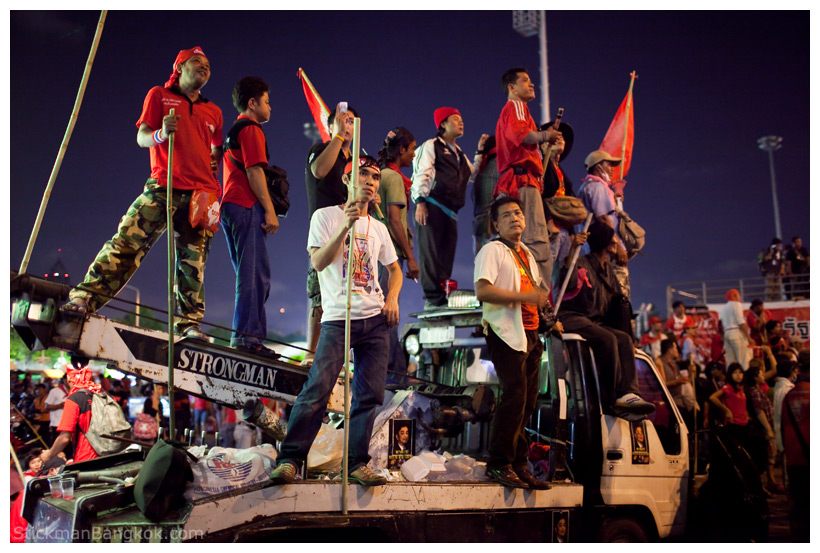 When questioned about our thoughts on Thai politics, I was open enough, responding that I do not understand the situation well enough to really have any strong opinions one way or the other. I said that I was there to learn which would help me to decide for myself. He couldn't understand that someone who had been in Thailand so long would sit on the fence but eventually accepted it, diplomacy being the winner. 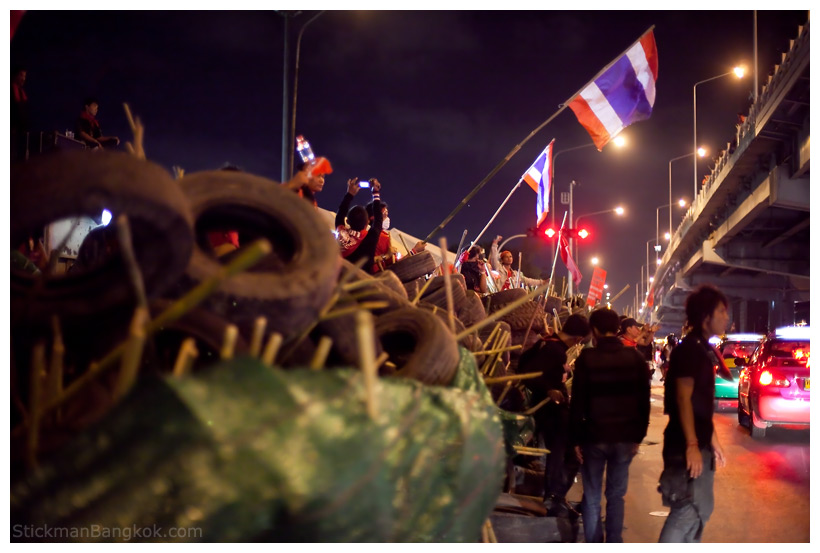 There was an eerie atmosphere inside and despite the reds hospitality – we were offered a free meal – we both felt that we were outside our comfort zone. After perhaps 30 minutes wandering around inside we decided to head for the exit.

When we reached the point at which we entered the gate had been replaced by a protected entrance way with tyres and we were both helped out of the compound.

In fairness to the red shirts, they invited us inside, were totally open about what is going on inside and certainly did not appear to be trying to hide or conceal anything. They were more than willing to volunteer the sort of info I would have thought they would make every effort to keep under wraps.

Just like the pro-government supporters who held a mini rally at lunch time and were furiously waving the Thai flag, so too was the Thai national flag being waved with pride by the red shirts. Both sides may love their country, but they have very, very different ideas on how their country should be governed…