I arrived at Gecko’s at 5 on the nail to collect Marisa. Closed! I told the door girl that I had arranged to meet Marisa, and she asked inside for her, but she was not there. Of course, TITP – This Is the Philippines, where all appointment times are approximate. I went for a wander around and then back to the hotel to write about Tuesday night. I had only just got as far as the second bar when I saw that it was nearly 7. Time to go. Of course, she was nowhere to be seen. She was upstairs somewhere with a friend, so I ordered a drink, politely turning down the requests of the waitresses I had bought drinks for last night (because I had a feeling it was going to be an expensive night) and studied the form while I waited.

At last, she appeared in the T-shirt I had bought her. It did nothing for her, just straightening out her curvaceous body – but I imagine it was a sign to all comers that she was off duty (except to me, of course!). It seemed harder than ever to talk to her as, in addition to her bad English, she seemed in a low mood. (I found out later, from a conversation with a waitress, that she needs a few drinks to get her going). I asked her about her friend, and she said she was upstairs, so I asked her to invite her to join us. I have often found that the “friends of” are even cuter than the girl I have chosen, and, more importantly, I hoped that she would help with the conversation and liven things up a bit.

Marie, 23, from Manila, has a baby 4 years old. Usual story: got pregnant at 18 and was deserted by her boyfriend. Quite a stunner. Pretty face and very slim. I like ’em slim, but she was too slim, almost bony, but with curves in the right places. She had a winning smile and was a good conversationalist, so it was not long before I was wondering if I could so manouvre things that I could take them both. Would they agree, and could I rise to the occasion? (It was only about 7:30, so there was a long night of drinking ahead). Well, it was worth a try. I would bear it in mind and find out how they felt about it through subtle hints, etc.

I soon discovered that Marisa was too shy for this kind of thing, which was what I expected, but as she was still sitting there like a Japanese sex robot with a flat battery, I thought of a compromise. I would barfine Marie for barhopping only – but on one condition, that the cost of the barfine was reduced. After all, 4,000 PHP is high enough, especially for a retiree, so I would only pay it for the full package – barhopping and boom-boom in the evening, and boom-boom and breakfast in the morning. Unfortunately, the manager said 4,000 or nothing. We discussed this for a while in a somewhat confused way, what with Marisa’s bad English and the loud music, and after a while I thought we had agreed that they would both come to bed together and give me the full service. Happy with that, I called for another round of drinks and chatted about other things, mainly with Marie, because Marisa was still in robotic mode. She was drinking Coke, so there was no hope of alcohol raising her mood. When the drinks were nearly finished, I said, “Time to go,” and took out 4 blue ones for Marie’s barfine. She reacted with surprise – “No! No! It’s a misunderstanding!” she gasped. “Marisa too shy!”

OK, fair enough, 4,000 saved, but I faced the prospect of a long evening with a sex robot. Worse, she wanted to stay in the bar, chat to her friends and watch her co-workers strutting their stuff. “You do this every night!” I said. “You need to get out a bit – see some other bars.” But she still wanted to stay. In the end, I said, “Well, it’s boring for me. You stay here and I’ll come back later,” and I paid my bin and left – with a feeling of great relief. Marisa had been fantastic on that first night, but tonight she was making no effort, and I didn’t want to waste my evening on a deadbeat. So I had gone, in the course of an hour, from a guy with a hot girl, and the prospect of two hot girls, to a single guy again. No problem; the hunt is the best part of it. 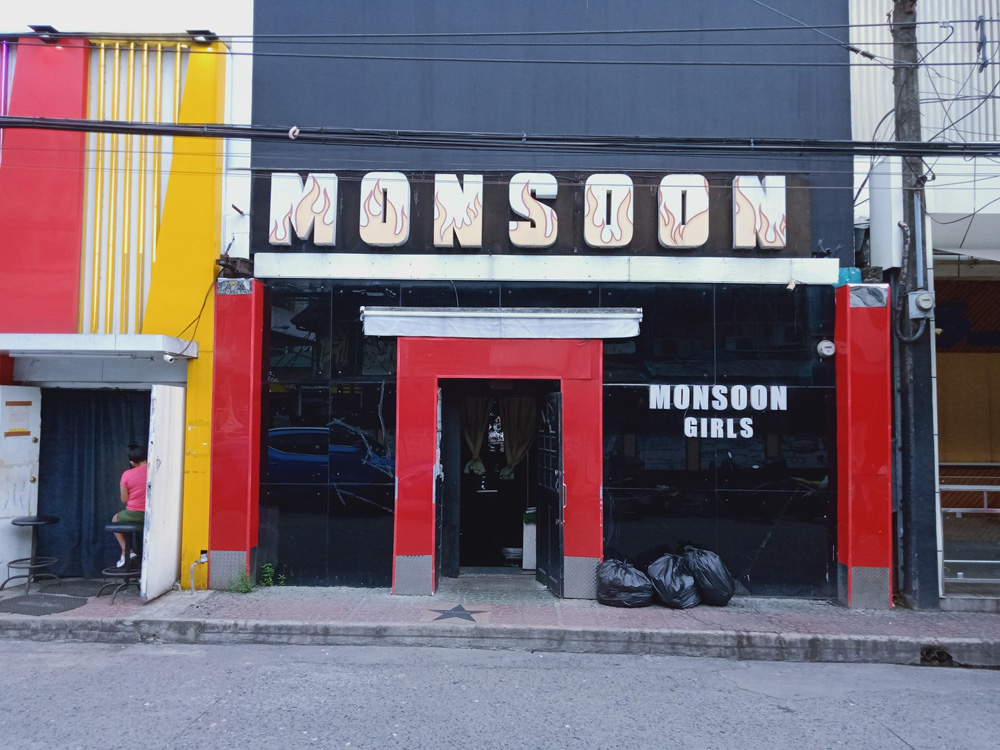 Where to next? Monsoon Girls was just across the road. I remembered Miss Perfect-Butt from 2019 and thought it might be worth a look. It was. The perfect butts were still there, amply showcased in black T-back bikinis, and a new touch, two girls with no top, only black pasties. One of them, with a kind of pussy cat hairdo (small top knots on either side looking like cat’s ears) had black star pasties, but was almost flat – pity, because everything else was good. Before I discovered Asian women, I used to be into big tits. Now I like them small and pert, Asian style, but there has to be something there for visual effect and to get hold of. The other girl had good-sized tits and had red pasties with tassles, but overall, was not so cute.

Set 2 consisted of 6 girls in black bikinis – 1 big and heavy, 1 gawky with an awkward posture, the others OK. As I watched, one of the girls began to grow on me. She was medium height (in Filipina terms) had long hair done in many tight braids, and most important of all, a winning smile. I watched her for a while, then the set changed again. Moments later, I was aware of a girl in a blue dress sitting two seats away from me. She said something. I looked, recognised her as the braid girl, and, deciding she looked even better close up, invited her for a drink.

Mary Rose, 21, from Leyte, two babies, oldest 6 – she got started young! As I got to know her better, I could guess why. In addition to her unusual braids, she had a tattoo on her arm. Tattoos are still rare in the Philippines (thank God!) though growing in popularity. The tattoo was of a rose, and she said it represented her name. I told her it was the name of a famous English Ship, the Mary Rose of King Henry VIII (I didn’t tell her that it sank). She turned out to be the most interesting girl I have ever met in the PI. She said she was a singer and I said, “Karaoke?” She said, “No, with band.” I told her I was a bass player, and that if I was around, we could form a band with her as lead singer. As the conversation continued, it turned out that she is also artistic. She drew a picture in my notebook, and I made a sketch of her, while explaining that my retirement ambition is to be the Gaugin of the Philippines. 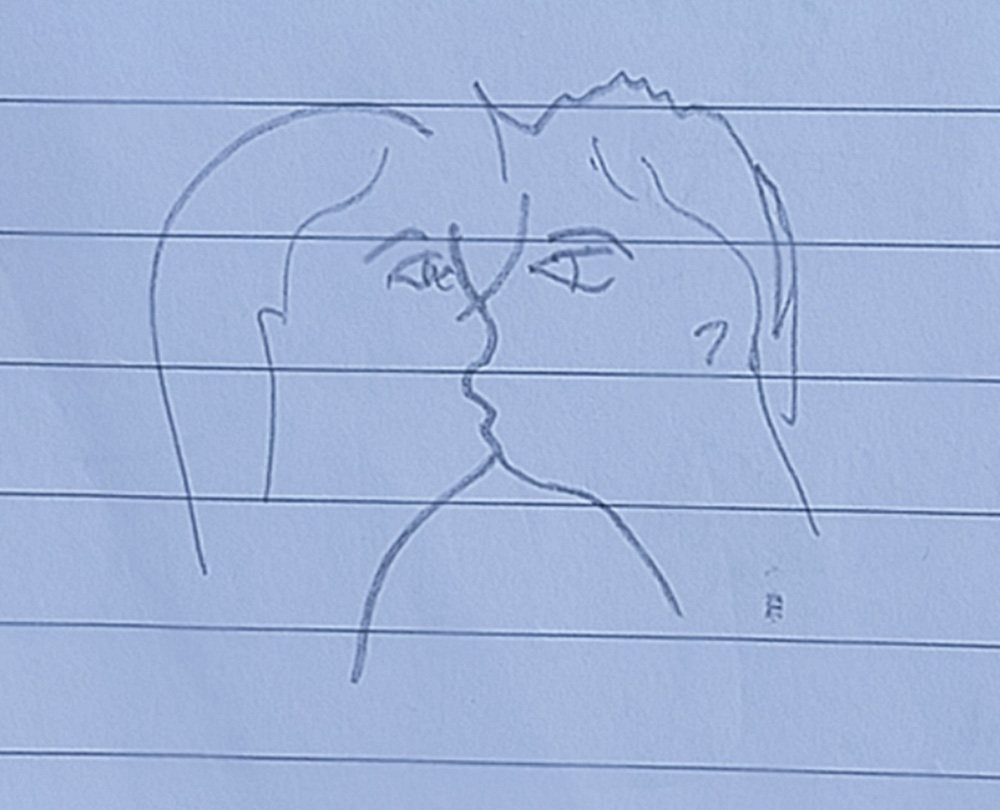 I explained that Gaugin was a 19th century French painter. Did she know where France was? No. I sketched a map for her. She still didn’t get it. So we started with the most recognisably shaped continent of all, Africa. No, she still didn’t get it. “Did you learn Geography at school?” I asked in surprise. Of course, she said, and sketched with her finger on the table all the main countries of SE Asia, and all the provinces of the Philippines. So I was wrong to expostulate against her education. Once again, I was being too Euro-centric. I went on to explain my project: to paint the textures of the old, decaying bamboo houses, and Filipina girls in various poses with backdrops of palm trees and beaches, including Philippine-repaints of some of the classics, like Ingres La Source. I sketched it for her, and she imitated the pose. “Right,” I said, “You can be my model. You do realise that La Source is a nude?” She laughed, “No Problem.” (I wrote a novella about this retirement fantasy entitled An Artist in Angeles City in which some of the ideas mentioned here are developed).

She claimed to be shy, but actually, I think she is an extravert, and it was those unconventional qualities that led her to get pregnant at an early age. Well, we all make mistakes, and she is paying for hers now. I really liked her, but remembering that good conversation can often be mistaken for chemistry, I tried my kiss test. She kissed me back, but it was a very quick peck, so I still wasn’t sure. Nevertheless, I decided to go for it, only to be told that she had “mens” (menstruation). I think I believed her, though this is the commonest excuse Filipina bargirls give if they don’t want to go with you, and, ironically, I last heard it in this very bar in 2019, when Miss Perfect Butt, after spending a lot of my money on lady drinks and drinks for her friends, used this very excuse – and in her case, I think it was just an excuse, as I had been led on by a desire to get my hands on her perfect butt and had ignored the voice of common sense which was trying to tell me that there was no chemistry between us. 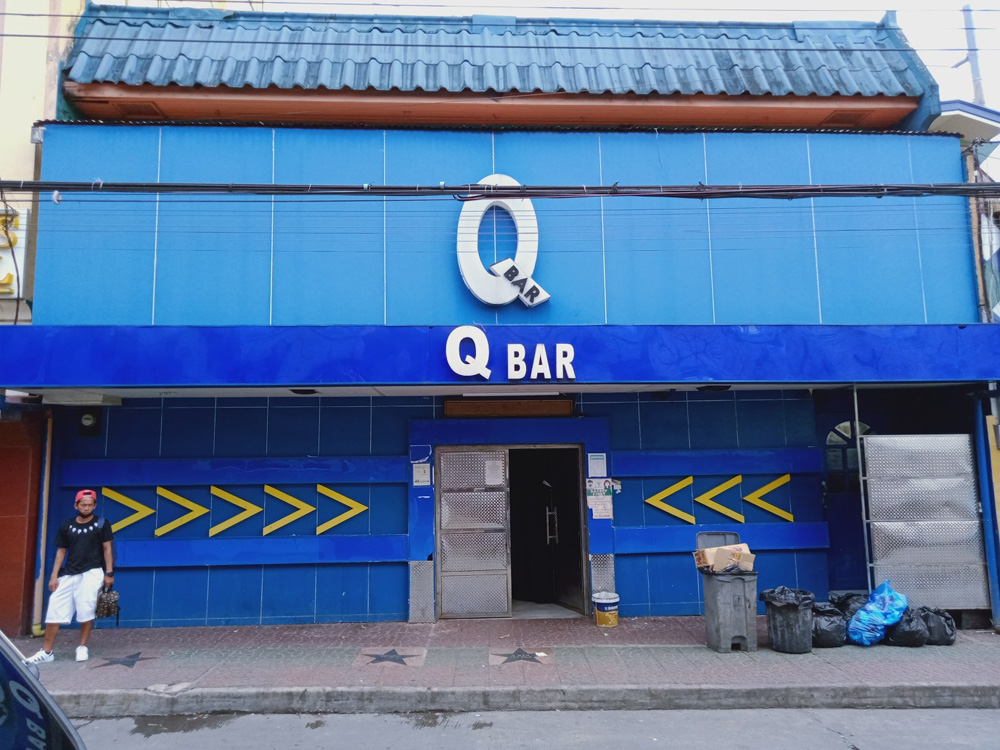 I’d often walked past Q Bar in the years before Covid and I thought it was time I gave it a proper look. There were just a few bored-looking customers, but plenty of girls, about 22 of them of a good average standard. But if the customers looked bored, the girls looked as though they had lost the will to live. I have rarely seen such a set of glum faces. I understand. It’s a boring job. You stand there on a freezing stage, hour after hour, and occasionally get to have the same old boring conversation with a boring customer: “what’s your name?”, “where are you from?”, “how old are you?” “will you give me a BJ and 69?” etc. The only consolation is that the money is good – 250-450 PHP per day, plus a share of lady drinks, tips and half the barfine. A pretty girl can earn big money. However, they need to fake it a bit to reel the customers in. Fake a smile, fake having fun, fake interest in his boring conversation, fake an orgasm, fake being shagged out by this stud of a man to get away early – but these girls weren’t prepared to fake it and their gloom was beginning to affect me, so I necked my San Mig and beat a retreat.

If you enjoyed this article about my recent experiences in Angeles, you might also enjoy some of my books about Thailand and the Philippines. Take a look here or here.

The author of this article can be contacted at : rumblejungle19@gmail.com

Report From The Front