Gecko’s is another old-style gogo bar: a stage along one wall with a long mirror behind, and customer seating opposite, also with a long mirror behind, so that the bar and the girls seem to go on to eternity. The mirror has lists of names of customers who have rung the bell with dates which I traced back to 2004. The bar is named after a type of lizard, common in the Philippines, which makes the sound from which it got its name: “gecko, gecko”. A picture of a Gecko is included in the bar’s logo, as you can see from this picture: 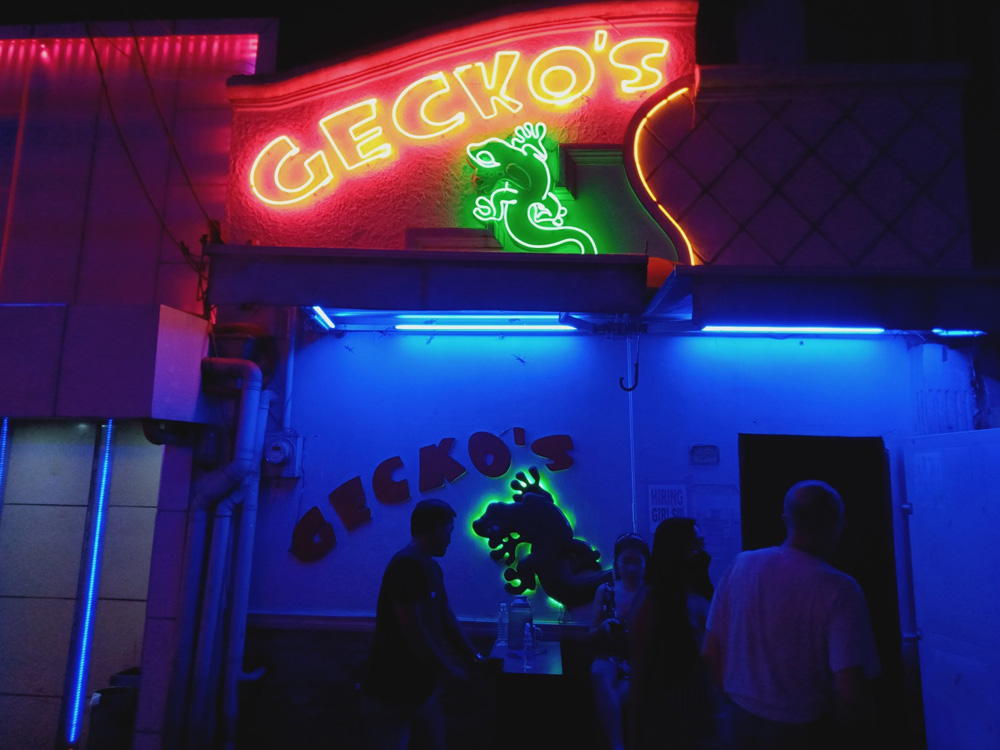 It’s 17 years since I was last in Gecko’s, but it hadn’t changed. It may have been redecorated, but if so, it was more in the way of touching up rather than refurbishment. It has the typical old-style gogo bar decor, with fairy lights around the bar and the door, and coloured LED spotlights illuminating the stage. These, and the sound system, must be recent additions.

I studied the form for a while and was pleasantly impressed. The first set of girls, about 9 of them, wore red dresses. They were girls of the right sort; young and slim, a good overall average in looks, with a few stunners. I was just thinking that they were a trifle overdressed (I can see girls in dresses outside for free) when the set changed and another 9 or so girls came onto the stage in bikinis or less. By ‘less’ I mean a T-back bottom and a body painted top. Nipples are covered with pasties, and then the breasts and upper bodies are decorated with tape and painted patterns. This is as close as you’ll get to nudity in AC, as it is illegal, but T-backs and body paint come pretty close.

There were a few girls I fancied. One on stage and one chatting to a customer. I like to watch other customers interacting with the girls to see how they get on, what they do, and whether they pay the barfine and take her out. This customer was a westerner in the same age bracket as me, and he seemed to be really into the girl. She was cute as a button. I could only see her face and upper body, but it was enough to tell me that she was my type – pretty and petite.

One of the problems with AC bars is that they have too many waitresses – which is especially noticeable at the moment as customer numbers are still building up. They often hang around and chat you up, partly because they are bored, and partly because they are hoping for a lady drink or tip. I’d been chatting to my waitress – Greta (no, not that Greta – she’s till on the Climate Change bandwagon) – for some time, so I did the gentlemanly thing and bought her a drink. I was just settling down to get to know her better, when I saw the guy opposite reaching for his wallet. This was the defining moment – either check bin or barfine. I held my breath. It was check bin. He got up and left, and she got up and walked in the other direction. Quickly, I asked the waitress to bring her to me and in a moment, the girl was by my side: Marisa, 22 from Catbalogan City in Leyte. Just one week in the bar, fresh as a daisy, and at 4’9” as petite as they come. Large brown eyes, full, kissable lips, and hot to the touch. I was in love! She had passed high school, but her English was limited – another sign that she was fresh to the scene. Luckily, Greta was still there, and she helped to interpret, and at some point, I can’t remember how, I found that I had bought a drink for another waitress. We chatted for a while, watched the girls on stage, and then I bought another round for us all – this time of Red Horse (Marisa’s choice). That was (I think) my 7th drink of the evening, and at 6.9% proof, the strongest, and I was wondering if, after 21 hours at 41,000 feet and all that alcohol, I could still perform – though that hot little body pressed against me inspired me to think that I could. I hugged and stroked her, and she responded well, and then – the kiss test (I won’t barfine if they fail this test). I made to kiss her on the lips, and she responded – pass! (Note that I don’t expect DFK at this point, just a reasonable response – a quick peck will do – but many girls will turn their cheek). I cross-examined her about how long she would stay – all night no problem (I won’t take them for less, as I do enjoy sleeping with a girl, literally as well as figuratively, but more important, it is an indicator of their attitude). The barfine in Gecko’s is 3,500 to 4,000, and as Marisa was one of the lookers, she cost 4,000. But after I had paid my bin – 2,600 – I only had 2,000 left. Greta offered to take me to the nearest ATM, which was just next door. The machine promised “International Cards Accepted”, and maybe they are, but it didn’t like my HSBC Visa (which is about as international as you can get). Never mind. I am no newbie to the PI and know that the safest thing is to bring vast quantities of cash. I had changed 300 EUR at the airport, and still had half of it stashed in the hotel (plus plenty of Euros as a backup in a moneybelt. So I nipped back quickly (it was only 50 paces away), got some more cash and paid the barfine.

She got changed and reappeared in a crop top with a hint of cleavage and a tight skirt – what a package! I offered to take her for something to eat, but she said she was not hungry, so we went straight back to the hotel. As soon as we got to the room, she went to the toilet and threw up – the result of what she’d been drinking earlier + 2 x Red Horse was too much for her tiny frame. Back in the day they drank watered coke, these days, almost all choose a beer as their lady drink and must get sozzled every evening – not good for their health, especially when combined with their typical Jollibee (fast food) diet. She threw herself on the bed and lay there looking wiped out, so I said to her, “No rush, sleep first.” Her response was to run to the toilet again. After a third toilet session, she drank half a bottle of water and seemed much better. Then she took off all her clothes and jumped on me. She was horny as hell as proved by the juice in her puki (the Tagalog term, which you don’t need a dictionary to translate!). I went to get my condoms from my toilet bag, but – where were they? I fumbled in my suitcase – not there. Never mind, I thought, I’ll take her bareback. It’s pussy-roulette, but she was new to the bar and fresh as a daisy, so no worries. However, sensible girl that she was, she insisted on using a condom, and I respected her wish. Luckily, she had come equipped with a pack of three, and proceed to put one on. Hard work! She had no idea how to do it (it should be rolled on), but worse, it was Philippine size – small! It was tight – tighter than she was, but we got going in the end – the rest I’ll leave to your imagination – or if your imagination fails you, just watch one of those Trike Patrol clips. What a day / night! But that’s life! Two years of excruciating boredom during the Covid era and a few hours in which all my fantasies came true.

We slept after that. I do love sleeping with a woman, to feel her there, hear her breathing, feel her body heat – and it was hot! – because she asked me to turn the AC right down (or should that be “up”, as I put it up to 26?) and she cuddled up to me all night long. At some time during the middle of the night I was dreaming I was making love to one of those pussy-perfect bargirls you see in the MyCuteAsian or TeenFilipina picture series, until I realised that it was not a dream – it was real! Wow! I had left the bathroom light on round the corner, so I could see her lissome form in the dim light as she cavorted with unbridled enthusiasm. I fell asleep immediately after that session and the next thing I knew was her sitting up and looking at her phone. It was half past midday. What? I was gobsmacked! – though, in fact, it was around my usual waking up time back in Farangland. It was not unusual for her, either. Because it was her day off (yes, Filipina bargirls get one day a week off these days!) and when I asked her what she usually did on her day off, she said, “Sleep.”

I said I’d keep her for another night and that I would pay the 4,000 barfine to her only, which was a good deal for her, as the bar usually gets 1,800. She was happy about that, and off we went for breakfast at Kokomos. Full American for me, Filipina breakfast for her with rice (I like rice, but not for breakfast!). After breakfast we went back to the hotel for a while, then we went shopping – me for a few toiletries and some proper sized condoms, she for a T-shirt (which I bought for her). The T-shirt was medium sized, so I said, “That’s too big. It will almost fit me,” but later, I saw her wearing it like a dress, the bottom of it coming down just beyond her panties. It was sort of cute, especially with all that leg on display, but failed to emphasise her best feature – that gorgeously slim waist.

She said she wanted to meet a friend and that she’d meet me in the bar at 5. I agreed to this, but warned her that I didn’t want to stay long in the bar as I would end up buying drinks for her friends, my waitress friends, the mamasan and Uncle Tom Cobley and all, and would have spent more by the end of the evening than if I rung the bell and barfined her and her friend as well. I’ve been in this position before, and that’s what happens – unless you’re a hard-faced cheap Charlie. Here’s a photo of Marisa asking for her friend in Agasy. It’s a back view to preserve her anonymity. 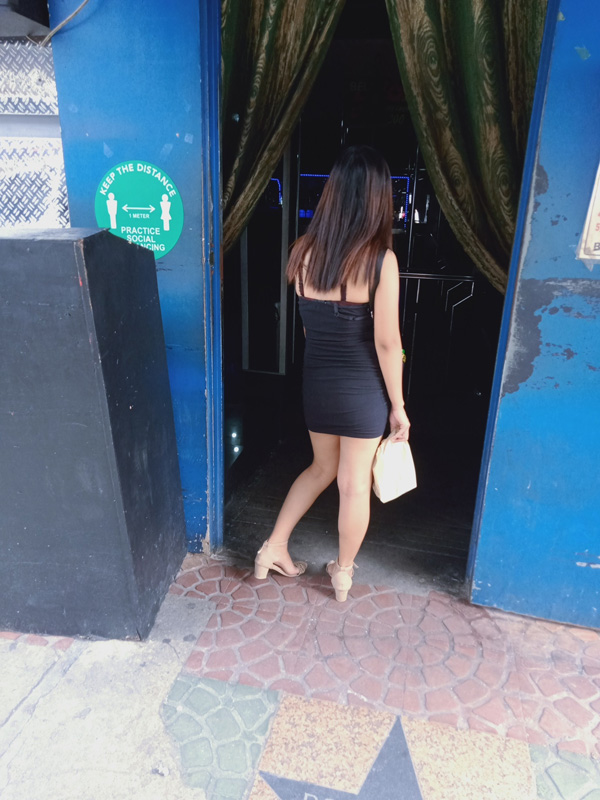 If you enjoyed this article about my recent experiences in Angeles, you might also enjoy some of my books about Thailand and the Philippines. Take a look here or here.

The author of this article can be contacted at : rumblejungle19@gmail.com