To misquote the great Austin Powers … “Bangkok’s back, baby”.

I didn’t meet Austin’s favorite Japanese twins, Fook Mi and Fook Yu, but I saw hundreds if not thousands of their Thai sisters who would be happy to do the job for a fistful of baht.

I’ll cover some of my points from March to provide a comparison.

Speaking of the silly Thailand Pass thing – this time my arrival experience at the airport and the hotel was like the good ol’ days.  Go thru Immigration, which wasn’t too busy, get a ride to a hotel, check in and start enjoying Bangkok.  A real pleasure compared to last time.

March: There were more businesses open than I expected.  I noticed the low number of people and lack of cars on the road.  In soi 11, I could walk ON the road and generally not worry about cars.

Now: Busier. Businesses mostly open, some places still doing renovations.  More traffic than before and I would not / could not walk on the street like I did in March.

March: Most of the time you could get a seat and if you chose to stand you had space around you – not packed in like sardines as it was 2 years ago.

Now: Noticeably busier than before.  Not as busy as 2 years ago, but more crowded than before.  Only once, on a Thursday lunch-time, was it so busy that it felt like the old days.  Surprisingly, a lot of the shops at BTS stations are still closed & shuttered.  In March there was only one shop open at the National Stadium BTS station (that being a Lawson 108) and it’s still the same now.

March: “Ghost town” would be too strong to describe it, but it looked like around 30% of the shops were gone.  Particularly the small traders MBK managed to squeeze into the corners & corridors – they’re mostly gone.  The large area dedicated to stalls on Level 5 was still there but with fewer stalls than before.  The restaurants up on Level 6, I think one floor beneath the cinemas, were mostly gone.  One or two were still open but they looked out of place given so many were shuttered up.

Now: I must have caught MBK in a late-pandemic renovation.  It’s almost back to normal now.  The stalls on Level 5 have relocated to Level 3 (as noted in a recent Stickman Mystery Photo).  The restaurants on Level 6 are back.  The hustle & bustle is back with a lot more shoppers.  There are fewer traders squeezed into corners and corridors and it feels more open and pleasant because of it.  I noticed one interesting thing.  Down on Level 2 there’s a string of novelty restaurants – 4 of them in a row – all Japanese or Korean themed.  The one that caught my eye was a Japanese type place where the serving staff are dressed in French maid uniforms.  It looked like a good idea (but I didn’t try it).  I noticed the next 3 restaurants all had some kind of novelty aspect as well.  They might be fun to try, although I suspect the food won’t be great. 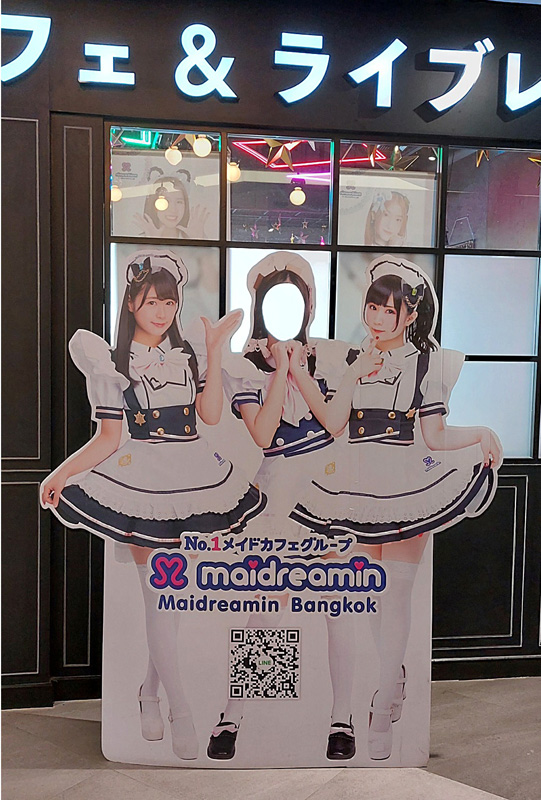 March: A ghost town.  Most massage shops closed and no ladies calling out for customers to come inside.

Now: This one is interesting.  There were noticeably more massage places open again but only one with the old vibe.  They appear to have gone up-market, or at least be more discreet.  There are massage places with signs that ask you to come inside.  One had an ad saying “come 10 times get 1 hour massage free” (I hope that’s not 10 times in one session).  One place had a sign that looked like a leg of ham but on closer inspection was probably a cute butt wearing panties.  It feels like a change in character from the old soi 33 and I’m guessing more people would be comfortable walking up & down the street now compared to before. 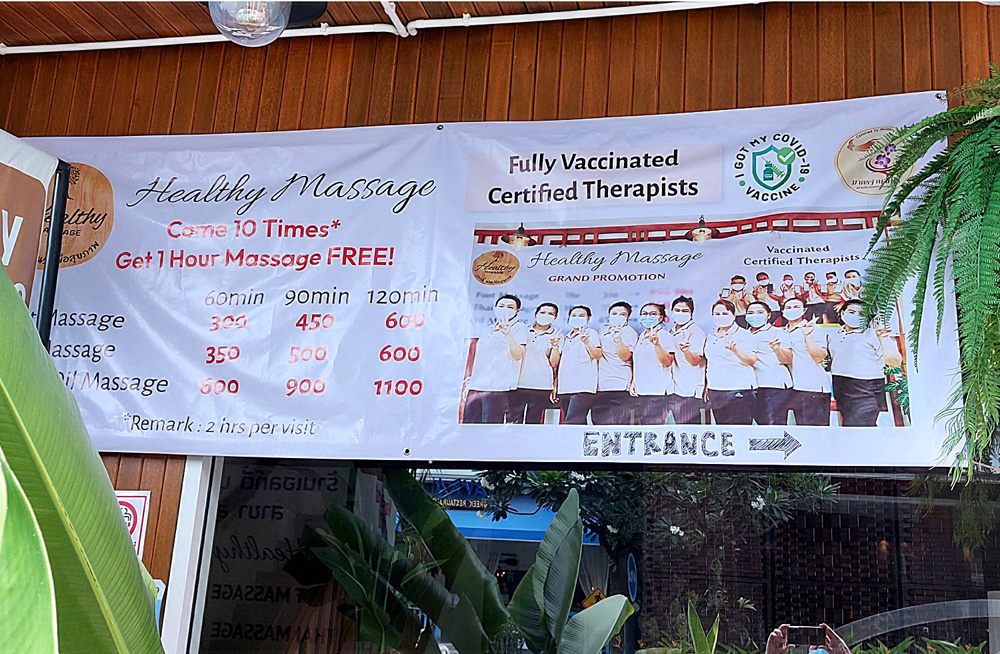 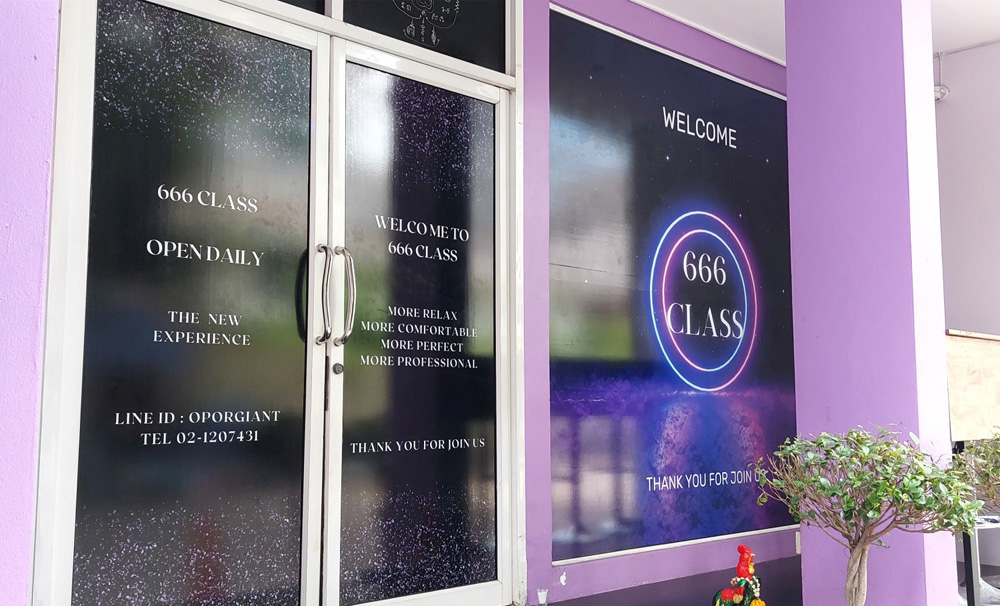 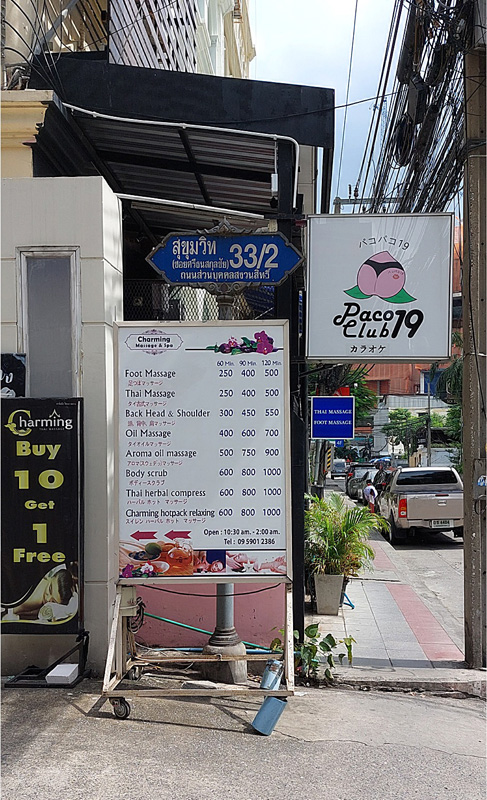 That’s a leg of ham, right? 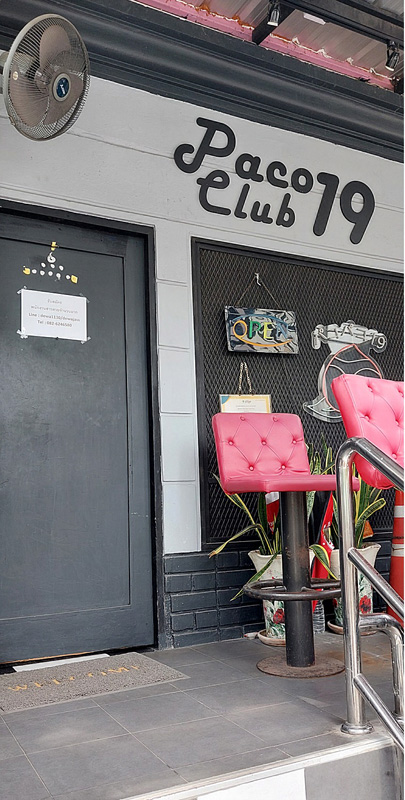 March: It wasn’t great.  Very few of the bars on the actual soi were open on the inside.  Mostly I saw bars with ladies on the outside doing their best to get people to stop for a drink.  Kazy Kozy seemed to have a good vibe.  I was stopped by a good looker at Suzie Wong’s but when I looked inside it was dead so I did a quick U-turn to get out of there.  Across on the Asoke side of Cowboy the pub style Country Road was doing a good trade.

Now: Almost back to the good ol’ days.  Only 4 or 5 bar sites were closed, the rest were open and back to business as usual.  Yes, I went into Suzie Wong’s again.  I stayed for 2 shifts of dancers.  The first shift was great – good looking ladies, all slim and attractive, two of them dancing topless.  A joy to watch.  The second shift featured the heffers – OK, that’s harsh – let’s say they weren’t nearly as lithe as the first shift.  With that it was time to go.

A visit to East End was in order but there was something strange.  It’s on the west end of Soi Cowboy – given the name I was looking in the wrong place to find it.  Recent feedback said the staff aren’t silly young girls but more experienced, say, late twenties & upwards.  I guess that’s true but I wasn’t impressed with the lineup.  They weren’t overweight like some I saw at Suzie Wong’s but they also weren’t attractive to me.  I had a drink with one that was good and enjoyed talking to her.  However, I probably wouldn’t go back.

What did I read on Stickman’s site recently – Dollhouse is back with upstairs & downstairs?  Upstairs in birthday suits?  I had to check it out.  And it’s true.  I walked in, went upstairs and there were four ladies dancing (shuffling), naked on tables.  I went to one (or was directed to one, I don’t remember).  Some girl asked me if I wanted a drink and of course I said “yes”.  She was wearing a dress and wanted to stay and talk.  Damn.  When I explored the nether regions of that dress there was alarmingly little on underneath.  Oh, maybe not “Damn”.  She then disrobed and replaced the girl dancing at my table.  Hot Damn!  It turned out she was really good.  Fun to talk to and pleasantly put together.  I spent a very good 1+ hour looking at and talking with her; I’d tell you her number but the poor girl had nowhere to show it – being naked and all.  (She didn’t have a number on the dress when she was wearing it.)  If you go there yourself her name was Nam (or Narm, or Nahm depending on what spelling you prefer).

Country Road still seems to have the most customers on the soi and best atmosphere.

March: In the plaza itself, on the ground floor, there wasn’t much happening inside the bars but the outside areas in the courtyard were busy.  There were a good number of ladies available for chatting.  I did a walk around on the two floors above and it was distressing (compared with the old days).  As these bars have no outside area there wasn’t much happening in any of them.  In Billboard they were open on the inside, and had ladies on the stage, some sitting in chairs, others standing.  They were dressed in skimpy outfits, but hardly revealing.  They weren’t allowed to dance.

Now: Back to normal.  A quick walk around showed (seemingly) all the bars open; if there were closed bars or renovations I didn’t notice.  Given the good recent reviews I looked inside Blondie but on that night at that time it had no customers and no atmosphere so I did a U-turn.  I tried Mandarin, a place I know can be hit or miss depending on the night.  On my night it was a miss.  One drink and I left.  I’ve visited Billboard a few times but never enjoyed it so I went to Bufferflies, which was interesting.  They had a good number of girls and the place had a good vibe.  The bathtub area had six topless girls all night (rotating three in & three out).  Most of the girls didn’t really appeal to me (personally) but there were a good number of customers having a good time.  There was one sexy vixen, number 12, who was a stunner.  Blonde dyed hair and all the attributes you dream of – pretty face, generous tits but not too big, nice waist, good hips, outgoing (“look at me”) personality – just fantastic.  For a reason I can’t explain she decided to make me her project for the night; I assure you there are better looking guys around so I don’t know why she chose me.  She had a great line for lady drinks, too, one I haven’t heard before “the more I drink the more horny I get”.  With all those assets gyrating in front of you, or on you, that line works well.  I had a nice time with her in the bar, didn’t drink enough to be stupid, gave her a nice tip and left.  The guy she spent time with after me would have had a REALLY good time.

March: A new discovery for me and it was good.

Now: Still good.  I tried a few more of the girls and was pleased every time.  BTW, the Baht 300 discount for bookings is still running but finishes at the end of August.  Get in fast if you want a reduced price.

If you like Bangkok then go back.  Almost everything is open and operating as normal.

The author of this article cannot be contacted.

A Return. Was Pattaya Worth The Wait? Part 2