EPISODE TWENTY – A CAR FOR CHRISTMAS


My shoulders are really aching now. I’ve been writing since midday and it’s now six pm and starting to get dusky, like some of the maidens in these ‘ere parts. The swimming pool attendant named ‘Oh’, who giggles incessantly, gives me a helping hand with my weekly haircut. There are always a few hairs out of place and cutting your own hair is not that easy so I was grateful for the attention. He, on the other hand, found it highly amusing and giggled even more than usual.

Reception at Kata Lucky Villas has become a centre of learning or mini university library. The senior lecturer and librarian is Pueng who has printed out my diary. I’m the overseas consultant and tonight I’m trying to explain British humour to her. That’s not easy as I don’t understand most of it myself. I was brought up on the Marx Brothers and The Goons so I’m probably not the best person to help the modern generation. She is now helping with my tropical fruit studies, part of which entails sampling the fruit itself which I like very much. She’s such a sweet girl and brings different fruits for me to try. Unfortunately, I have so far only reciprocated with chocolate which is pretty pathetic in comparison to her efforts. Isn’t it wonderful how small acts of kindness can enrich your life so much. I think I must start compiling an encyclopaedia of tropical fruits to make her feel better about her efforts.

Wah Wah said I must try Massaman curry tonight so off she went to ‘Flied Lice’ (that’s the name of the restaurant) to place the order. I must say it was a good choice. I’ll definitely do that one again. I think her skirt was even shorter today; maybe just wishful thinking. Anyway she was getting a lot of attention from a much younger man than me who seemed to have a pretty good line of patter going. I wanted to go but Yo-Yo insisted on buying me another drink. I thought it would be impolite to refuse so I stayed a little longer. She really had to twist my arm! 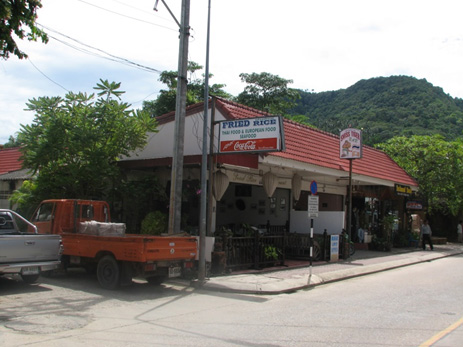 
Nin is back tomorrow so the whole crew will be back together again. They seem to get a good laugh at my expense and I’m glad they are happy. Before I left O’Tool’s Yo-Yo said, ‘If you are interested I have a motorbike for ‘lent.’ To which I replied instinctively,

‘That’s great; can I have a car for Christmas?’

I must try to remember when I am talking to a Thai in future. When I got back to the Villas I found Pueng sat on a pile of laundry, in what must be the hottest room in the place, trying to decipher my diary. I gave her a few pointers on how to read and interpret my writing and then slipped off to bed.

A day to remember

Lately, on a Sunday for some reason I don’t wake early. It’s odd, because Sunday is the same as any other day for me; and this one was fabulous but extremely hot and humid and I was dripping like a tap with a perished washer. Anyone who’s only ever lived in the tropics will have no idea what it’s like to suffer from dry skin. As it often is, Kata Noi was a picture postcard and the walk and swim were therapeutic. There were a few locals thinking about setting up the beach beds for the even fewer holiday makers who are here in the low season. If England had a ‘high’ season with weather like this it would be a major tourist destination.

Taew sent me off to the airport with her friend to fetch Nin who had come back from Buri Ram. I really must go there before I leave Thailand. The region – North East – bordering Cambodia to the south and Laos to the East is home to many ancient Khmer Temple ruins leading down to the historic temples at Angkor.

Thais are generally peace loving and content to live harmoniously with people from any race. You will see many different skin tones and kinds of faces in Thailand and in this there is a distinct similarity to the Cape Coloured people of the Western Cape region in South Africa where I lived since 1995. And I’ve just discovered that Thais are reputedly the most gay friendly people in Asia as Thailand is very liberal in its views on sexuality and has a very large gay population who are not suppressed in any way. All things are accepted so there is no prejudices against gays as there might be elsewhere. I should add that this is unlikely to persuade me to change my persuasion.

A fish supper at Bob Marley’s high on the hill was accompanied by much merrymaking among very few diners as another day in paradise drew to a close.

The Great Gift Of Memory