PLOY: a clever trick or plan that is used to get someone to do something or to gain an advantage over someone— www.merriam-webster.com/

You should know her real name by now, but I'm gonna have to change it at this point…how does "Poy" sound?…

So I'm flying back to the Dream Hotel in Bangkok, from Chiang Mai, and I'm supposed to meet up with Aja (coincidentally the name of my favorite album of all time…by Steely Dan), pronounced: Asia, and take her on a scuba diving trip to the island of Koh Samui.

I had met Aja on a dating site, before I was banished from her age group…it's an international website… I have made a few friendships worldwide thanks to it…

Aja's profile picture is one of her scuba diving.

She is 23 and attends school in Bangkok…hotel management…good head on her shoulders and had good advice on how to get to Koh Samui and where to stay and stuff.

I saw her briefly when I first got to Bangkok…after I said goodbye to my special girl at the Cowboy. We had dinner and made plans for this week… very smart and pleasant.

Aja is NOT a bar girl.

I call her when I get back to town and she says there was a typhoon or something and the boats can't make it across and the water. The water visibility was all jacked up and she's not going…oh bummer…crap, I was so looking forward to it…bummer…

… and that's how fate would have it…

My first thought was of my sweet Poy…

I texted her: honey, will you come with me to Phuket for a week?…she sent back: yes I will go with you!

She came to my hotel a few hours later and we started all over…another wonderful night…another dream at the Dream…incredible. I really felt a mutual connection, and thought that she really was falling for me as much as I for her…thirty year age-gap and all.

We talked about getting her the hell out of the bar… maybe school, another job, go back to Khon Khan and work at the post office, or move in with me, whatever…

She was honest with me about her previous customers…two Peters, one from Finland and one from Toronto…the big Peter from Finland texts her every day and Peter from Toronto, whom she really liked, found someone else in the Philippines….but was scheduled to see her again in a couple of weeks anyway…I couldn't find out exactly how many customers she had been with in the month she'd been working there…

The next afternoon we go see Mamasan and paid a week's worth of bar-fines (rental fees)…4900.

Now Poy is not real sharp, she admits she's a little slow…and she's new on the job so Mamasan is her teacher and I assume has taken Poy under her wings, teaching her the bargirl trade…(haha, the first lesson is to say: "wow, it's so big!")..it was only her first month on the job….

Mamasan turns out to be a real money milking scammer… the Ploy behind Poy…. she teaches her girls the lessons…it's her job and she has seen and done it all…she has lots of experience giving "Flanges" (as Pattaya Gary says) the slow money siphon…at the time I thought she was pretty cool…

Mamasan tells me to give ploy 500 so that she could see the doctor NOW and get her monthly physical…hmm, that's weird I'm thinking. Why should I pay her doctor's bill?

So off she goes and I'm sitting at the bar again, buying everyone drinks again…oh, and Mamasan's grand-daughter has a broken arm and they need money….ok here you go…that's part of the scam… so 1500 baht on drinks and a baby's broken arm story later, Poy comes back…and gives me the change from the 500?…see?…Poy is honest… whatever…"Let's go to Phuket honey!" and we're out of there— heading to the airport.

My plan is to rescue her while she still has her innocence…before she gets hardened and jaded…which will affect her, her psyche, and her whole life, never being able to change it back…never able to recoup that innocence to the point where she will never have a happy marriage or a real long term relationship…a bar girl forever, until her looks and youth are gone…jaded, hardened, cynical and unable to really love, forever (come to think of it, it sounds a little like me)…. to the point where, as the saying goes: you can take the girl out of the bar, but you can't take the bar out of the girl. This is a common subject described much better by other posters on Stickman, but you know what I mean.

We are very excited and happy on the short plane ride, taking pictures, touching and kissing…I am smiling.

I told her what a scammer mamasan was and she said not to worry…the first night is on her…I am telling you: this girl is different.

She had made arrangements to stay at a hotel that she worked at previously. She said she only lasted a week as a receptionist…we were greeted at the airport by the hotel owner, Jonah (not real name), who apparently worked with Poy's father for two years in a car factory…he came from nothing and now owned a hotel and three bars…it was low season and he had some extra time…his hotel was basically empty and we got a room for 700 per night, a few blocks from the beach.

We drove the 30 minutes from Phuket to tourist central: Patong Beach. I said, while admiring the action as we got closer to town, "I think I'm gonna like it here".

Poy caught up with the employees she used to work with…they all loved her and her radiance, beauty, permanent smile….and innocence?

We unpacked and headed into town…

Pure craziness…not just one street full of bars and restaurants, but the whole town was a party…it was huge…

…so we are out on the town…crazy town…we ate, then cruised the main drag…Bangla, is it?

This bar was spectacular…three stories tall, it contained about 24 identical small-bars within a bar with 48 stripper poles and hundreds of bargirls…there was a huge disco on the second floor and live band at the top…Johan owned one of the small bars and that's where we went…

Poy introduced me to the bartenders and dancers….then out of nowhere there are six or seven more of her friends…and guess who got to buy them all drinks? It was the fastest one hundred bucks I've ever spent!

l had my doubts now about how long she lived here and what she did for work while in Patong…I don't remember what she answered when I asked how she had so many friends in Patong…but I was just trying to make her happy and was enjoying the whole experience.

She was very affectionate the whole night and we did a lot….I don't remember if I even looked at another girl…I had all I wanted standing next to me…my little girl…someone to take care of.

I don't think she would drink more than two drinks in a night…not much of a drinker…but I made up for it.

That night in bed I was lying naked and she examined my whole body…every freckle, age spot, bump, lump or knot…she got to my fingers and noticed my nails where getting long…out come the clippers and she gives me a manicure….just before the massage….just before the loving.

The next day we rented a motor bike and drove up to the Big Buddha on the hill…she showed me how to pray…we prayed together in front of the monk, while he prayed and chanted for us… she said I had to touch her the whole time during this, for some reason…then the monk tied some multi-colored string around our wrists. 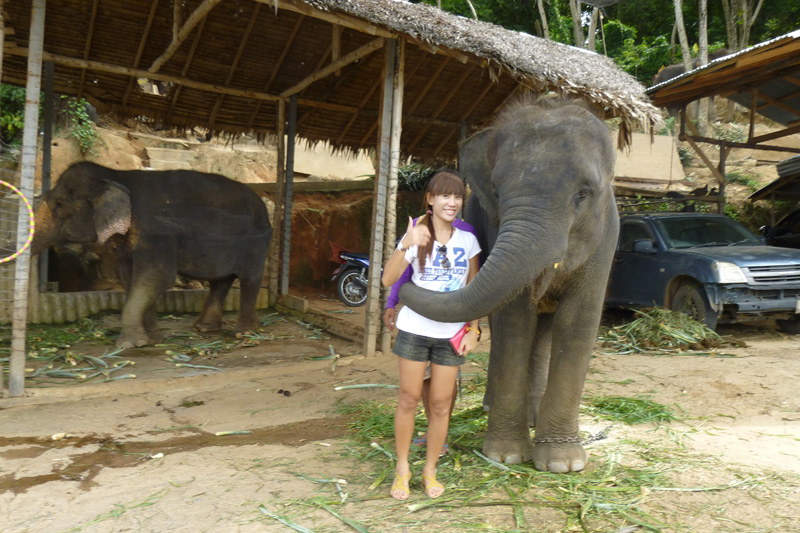 One of the monkey's name was Poy too!

The next day we went scuba diving near Phi-Phi island…the first time for me in thirty five years! I love the feeling of weightlessness and love hanging suspended upside down in the clear warm water.

The next day we hung out at Kata Noi beach….very nice, clean beach and not (as?) polluted… as Patong. 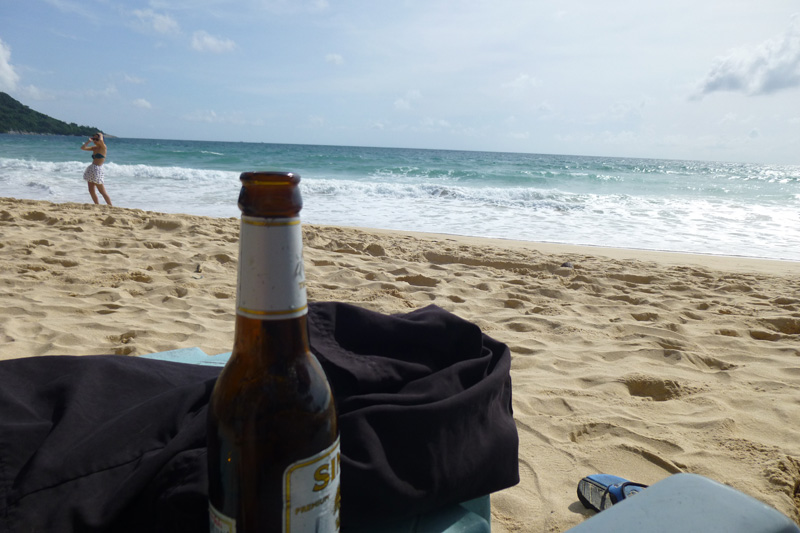 Drove home drunk on a friggen moped scooter thing…holy crap…I drove as slow as possible…steep hills…only by the grace of god.

I need to keep this short and I'm trying to make a point about the whole story. ..and I don't know how it happened or where or what but the feeling you get when you find someone is overwhelming sometimes and somehow somewhere I asked her to marry me… she said 'yes'.