Thailand is a fairly short flight for Aussies coming in via Singapore, Kuala Lumpur or direct to Bangkok. Probably about half the distance it is from South Africa. So, needless to say, there are more tourists from down under than anywhere else. We all know that when the word ‘couth’ was invented the Aussies were on a very long vacation and ‘cool’ does not feature at all when it comes to fashion or style. I’m not the snappiest dresser and I must admit to owning a few garments in the past that have been in and out of fashion once or twice but some of these guys look like they are on the third or fourth cycle. Even fashion ‘T’ shirts aren’t that expensive but when you are trying to recycle one that you bought in Hawaii 30 years ago which now says

I think it’s a little ‘scroogy’. Oz baiting is such fun particularly as they are ‘good on yer’ sports about it and can always have a crack at us Poms without causing offence. I’ve had too many laughs today; it’s time for shut-eye. Oh no look what day it is tomorrow!!

Beware its Friday the 13th 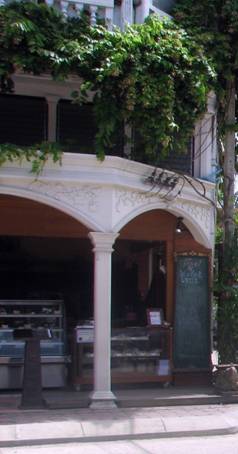 There was no rain overnight and there’s been no rain all day today just cloud and wind but still warm and pleasant. I checked the late emails from yesterday before breakfast and then I went off to the beach for a walk. The sea was rough so there were only a few hardy folk out early to join me for half an hour or so before I took a look for somewhere different to have breakfast.

I found a quiet little place which is a bit bistro like and somewhat out of character for these parts. A Cappuccino and a very fresh croissant went down well before I scooted back to the office. Making a short stop for some water I met a most attractive woman. I guessed she was only about 19 but turned out to be 32. I’d be useless on a quiz programme; so better have a swim before I start work to cool me off!!

Communications aren’t going too well at the moment. Slow responses and some confusing instructions from Cape Town base camp are frustrating me no end. Can I do anything about it? If so I will. So there’s no need to worry, everything will be fine. If it’s not, there’s no point in worrying anyway. I believe the Dalai Lama said something like that once. Just keep plodding away James you know it’ll come right in the end. I’ve had enough of work today. It’s past seven anyway so I think I’ll have a well-earned drink with some new friends.

They took me to a very friendly little bar called Hollywood which doesn’t in any way live up to that name. No wine lives here so I ended up drinking Singha beer, one of the local brews which is very drinkable. We ended up playing ‘Connect Four’, you know that game where you slide discs into a rack and to beat your opponent you need 4 in a row.

One of the bar girls took a fancy to me, quite obviously pretending I’m the best thing since sliced bread. I’m not falling for that one again!! I did over tip her though; I’m such a soft touch.

Although it’s Friday 13th it’s been a great day for me. Luckily I’m not superstitious.

The sea was rough this morning and humidity high but alone on the beach walking at dawn is invigorating. I was rushing a little to prepare for my trip to Bangkok and two hours trying to rectify IT problems remotely from Cape Town which remain unresolved don’t get me in a good mood. Communications are still problematical despite the high tech world we are supposed to live in. I worked all day, then packed my cases ready, so I can unwind a bit tonight; not too much though as I must travel tomorrow.

Two Singha beers and a plate of Pad Thai with new friends on the roadside then one for the road in Hollywood and I was off to my bed. 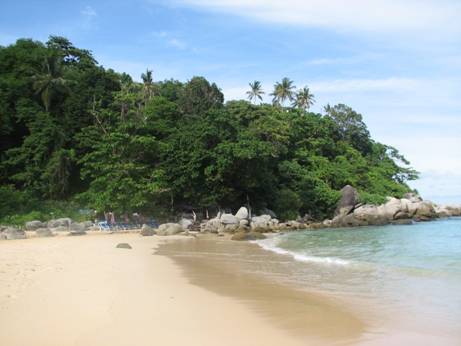 The Wâai is the way of greeting (like the western handshake) and adheres to strict rules of protocol. Both individuals raise both hands, palms joined with the fingers pointing upwards as in prayer, lightly touching the body somewhere between the chest and the forehead. The Wâai is a sign of respect and a greeting demonstrated by the height at which the hands are held and how low the head comes down to meet the thumbs. The Wâai can be made while sitting, walking, or standing. The person who is the younger or of lower status is the first one to offer the Wâai. The senior person returns the Wâai, generally with their hands raised to somewhere around their chest. If a younger person is standing and wants to Wâai a senior person who is seated, the junior person will stoop or bow their head while making the Wâai. If there is a great social distance between two people, the Wâai will not be returned. This tradition is relaxing more and more and seems to be getting less formal all the time. Young Thais are always amused if a ‘Farang’ offers the western handshake and, I think, are quite flattered by it. I’m learning all these new things slowly but surely and I mustn’t forget, especially when I’m in Bangkok next week.

A Sunday morning swim and a beach walk on a stunning sunny hot day set me up for my flight to Bangkok. I say farewell to my new found friends who are going to the temple to pray for my safe journey. It’s comforting, even though I am not religious, to think anyone cares enough to do that.

Finally I finish my packing successfully as I wait for the taxi to the airport which is about fifty minutes away.

On arrival at Suvarnabhumi airport I found a taxi fairly quickly and was whisked off to the Holiday Inn Silom at the centre of the jewellery industry and the City itself. As I entered the grand entrance lobby I heard my inner voice saying ‘My how it’s changed since I was last here three years ago; now completely upgraded and very modern.’ After I settled in I saw my local celphone was out of airtime on so I sms’d Paul in Cape Town on my South African simcard. Paul, who is about forty, has been my business partner since 2004. He is very much a hands-on people person, industrious and enthusiastic; sometimes hyperactive he is bilingual (English and Afrikaans) and talks like a machine gun. Despite a few acceptable flaws he is rather conservative, honest as the day is long and totally reliable; admirable qualities. A glass or two of wine, a bite to eat and I was soon in bed ready for tomorrow’s business day.

Changes In Seasons - Changes in Reasons