This past December my wife and I went to her home village on the southwest coast of Leyte for her village fiesta. We normally go in March when the price of airline tickets is much lower and travel is less hectic, but she wanted to visit during the fiesta at least one more time. After arriving in Manila just before midnight, we waited around the domestic airport until the PAL ticket desk opened the next morning. We couldn’t get on the first flight but managed to get on the midday flight. We then found out we had to go to the new Terminal 3 to catch our flight to Tacloban, so after another taxi fare we queued up and made it onto the flight. After a short flight of just over an hour we landed in Tacloban and made the 3-hour van ride to the road to Anolon. 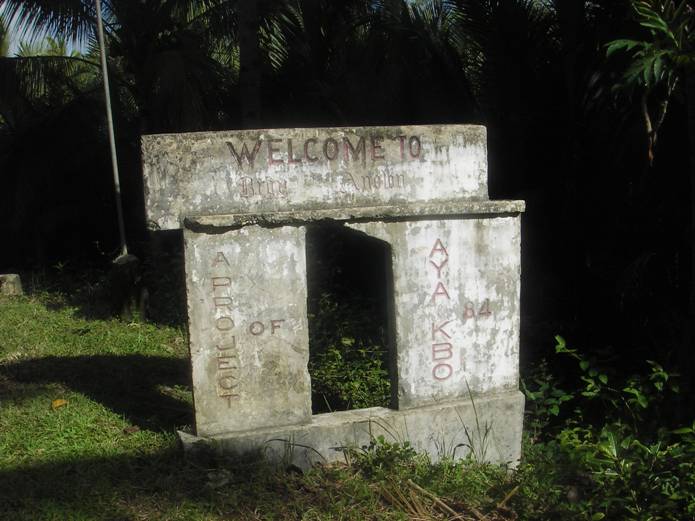 After turning off the National Highway, we started up the mostly gravel and dirt road to the top of the hill where my wife’s family has their family home. At the beginning of the road we passed by nipa huts built on stilts with nipa thatched roofs, woven bamboo walls, and bamboo slat floors. These were some of the poorest dwellings near her village. The yards around the huts were mostly mud and were on land barely reclaimed from the marsh. 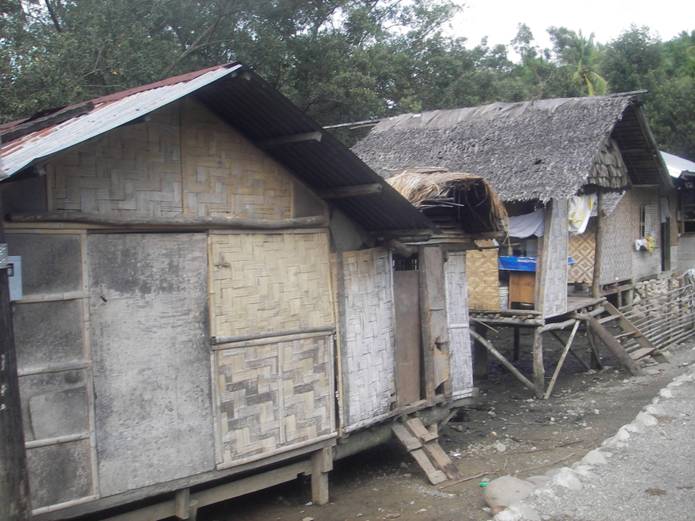 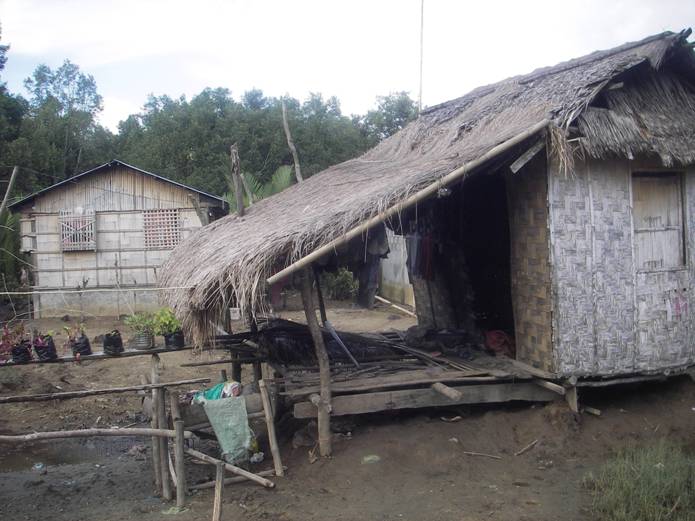 Every time we passed by this one hut there was a friendly lady who would always wave and smile. She always had a porcelain pitcher and what appeared to be a sugar dish so she could be waiting for a companion for high tea. 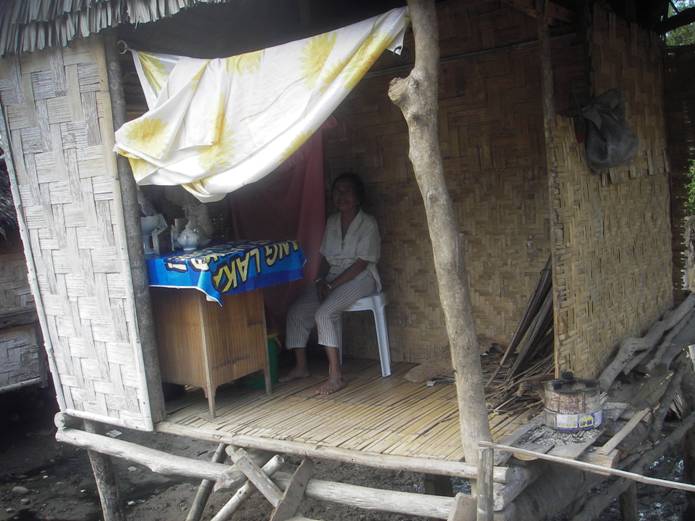 Just up the road from her was a little more affluent dwelling with a cinder block foundation and paint on the walls. There were numerous plants around the house either in plastic pots or in plastic sacks filled with dirt. This seems to be a popular Filipino method of raising potted plants as these sacks of dirt with plants are often found around their houses. There was also a cute little Filipina who came out to see strange the white visitor. 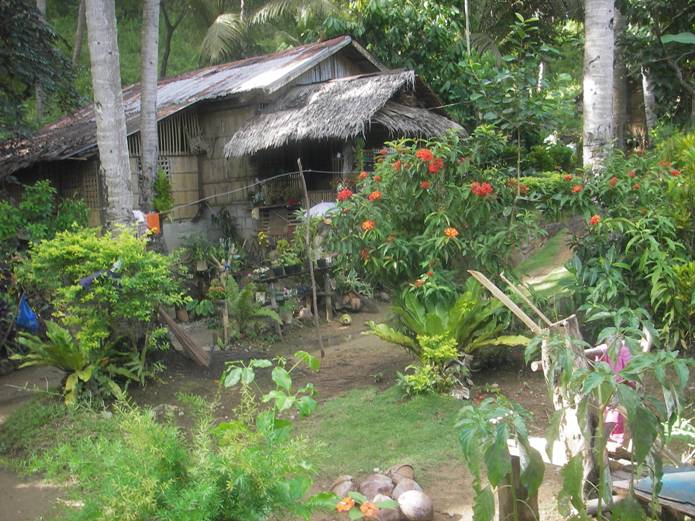 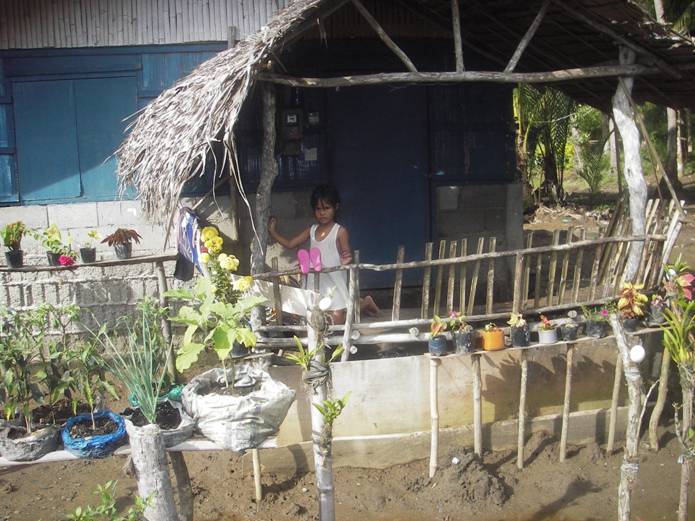 Farther along the winding road was a solitary nipa hut with very attractive landscaping with flaming blooms of ixora. Across the road and just a little farther along, we saw a cute little Filipina at one of the old style hand pumps. My wife says she remembers fetching water from the same pump and carrying it up the hill in long thick sections of bamboo when she was a little girl. 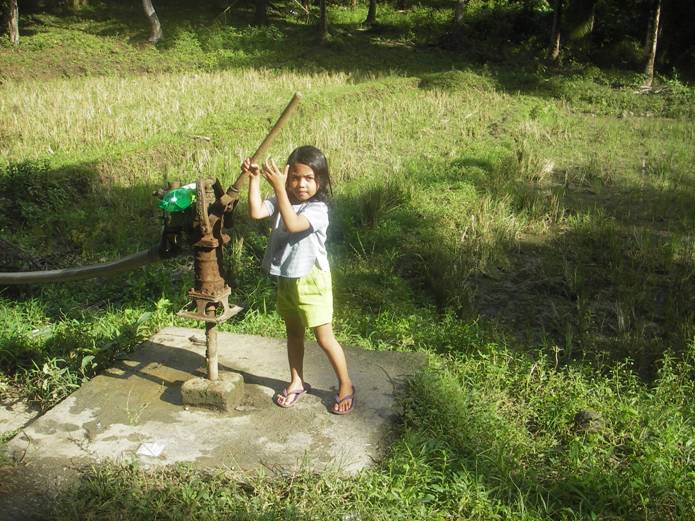 Along the side of the road was a young goat, or kambing. While I like goat stew I could never bring myself to eat this cute little guy after seeing and petting him. I have to have my meat already sliced and not resembling a living creature. I don’t have this problem with seafood however. 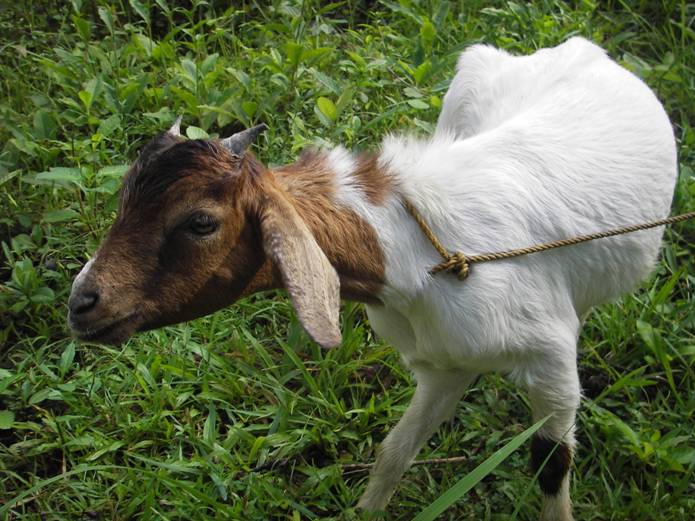 After reaching the top of the hill we pass by my nephew’s home that he shares with his wife, son, and pregnant daughter. The baby’s father is away in Manila where he has a job. 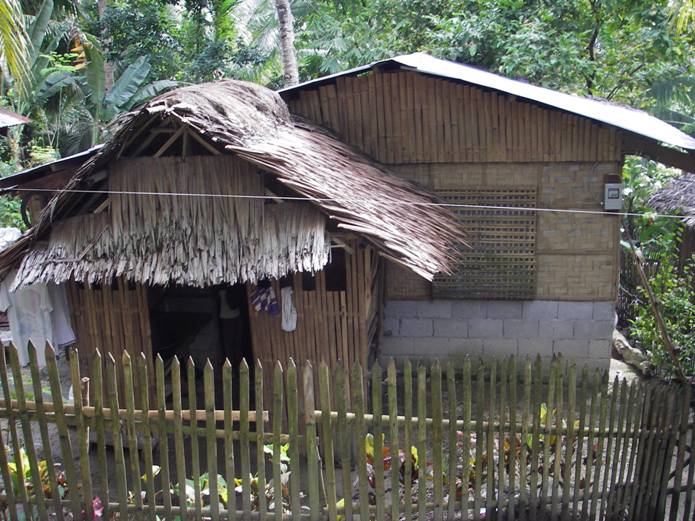 Then we walk down the steps to the family home that my wife had built for her parents. The concrete steps and walkway were built with donations provided by yours truly and with the labor provided by the nephews. I had slipped and slid down the muddy steps that were there before a couple times too many. I also donated materials for building steps at one of the community water taps so the kids wouldn’t slip and slide while performing their daily chores of fetching water. There were always crowds of kids hanging around the porch or walkway. You might also notice a couple stalks of green bananas or saging propped up against the side of the porches. Just behind the house is another nipa hut built by my brother-in-law. I believe he did it to have a place to go to get away from all the commotion that happens during our visits. 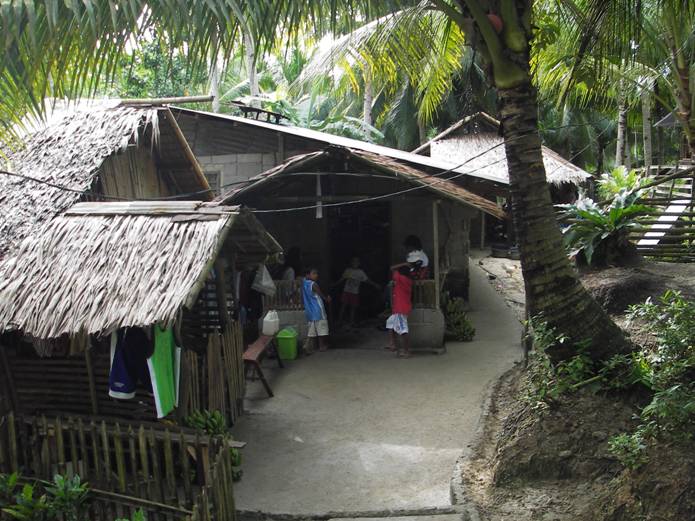 I conclude this submission with a couple of photos of the view out of our bedroom window. It was lush jungle filled with bamboo and coconut palms. If you look closely you will notice the notches cut into the trunks of the coconut palms. This is to aid climbing the trees to get coconuts or the sap that is used to produce tuba which is the traditional alcoholic drink made from the sap of the palm fronds. It is exposed to the natural yeasts in the air and allowed to ferment for one to three days. The longer it sits, the stronger it gets. Then a red powder created from the roots of a certain mangrove tree is added to stop fermentation is added. Without this additive, the tuba becomes suka, or vinegar which is used in cooking and as a dipping sauce for foods such as fish. 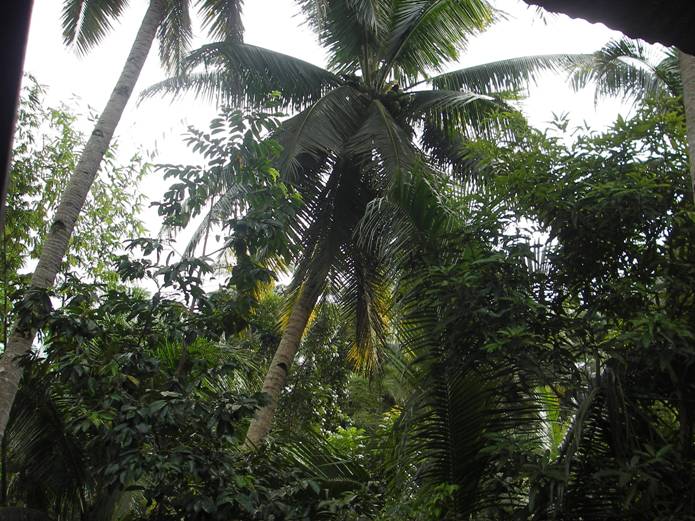 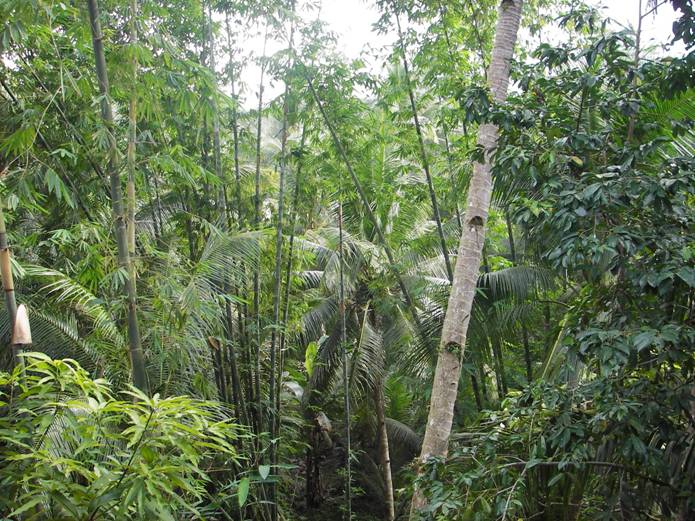 I conclude this submission from the bedroom because that is where I need to be to recover from the jet lag and to rest up for the activity of the following day. I will accompany the men out on the banka boats where we will dive for suwaki, or sea urchins.

Yikes, it really is much poorer over there than Thailand!

Can Tho: A Generous Tip Refused