Monks on my Mind 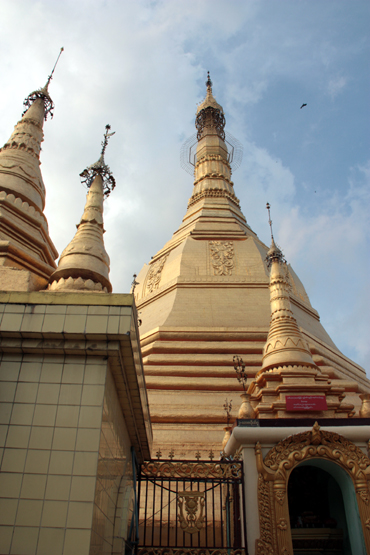 I got to the top of the several sets of broad stairs, sat down on the black and white marble floor, set my bag to one side, and made myself comfortable against the gold-painted pillar at my back. And then I began the small task that I would carry out with singular dedication for the next two hours. 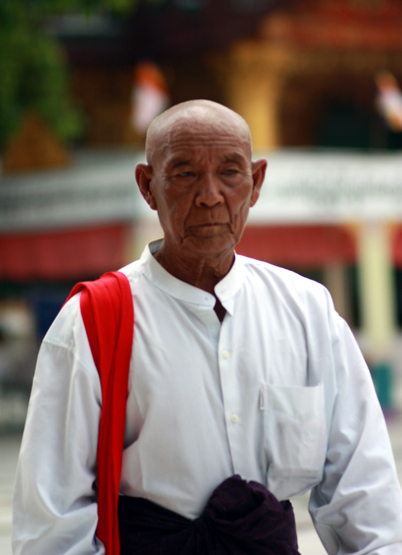 I had been at it for over an hour when a young and very attractive Burmese woman dressed in a dark blue and gold sari, and with the familiar thanakan on both cheeks, sat less than a foot from me. Without saying a word, and barely acknowledging my presence, she began praying to the large gold Buddha within the elaborate temple in the near distance. She brought her hands together and spread her fingers and brought the tips of her two middle fingers to the front underside of her chin. She had closed her eyes and was silently moving her lips. She continued to pray for several minutes, oblivious to my breath-close presence, my mental note-taking. And yet I wondered: had she already come to a conclusion about what I am doing so shamelessly, silently, avidly? 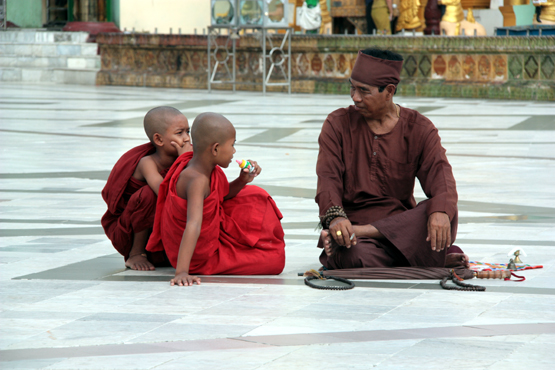 She continued to move her lips in prayer, and then fold her body forward until her face touched the ground, not alone among others who were also praying. Or eating or talking. She rose to a sitting position and then again moved her head to the ground. She did this four times. She continued to pray for another five or six minutes, her hands still together but now moving them slowly and methodically to the bridge of her nose and then to the top of her head. There was a pattern and a meaning in all of this that I do not understood, could only guess at. But I remained fascinated, mesmerized, unable once again to fathom belief in a world of stories as fictional as any of my wildest fictions. 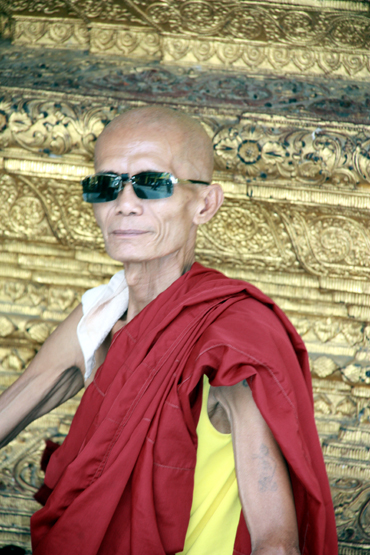 I was here at Shwedagon Paya on Singuttara Hill, the largest stupa complex in Yangon and one of the most impressive to be found anywhere in the country. In watching and staring at this woman so close I entertained the conceit that she was not just offering her own prayers to the huge Buddha in the temple across the common walkway and not thirty yards from both of us, but that she was asking Buddha to forgive me for my audacity. What a conceit! I had to admit. 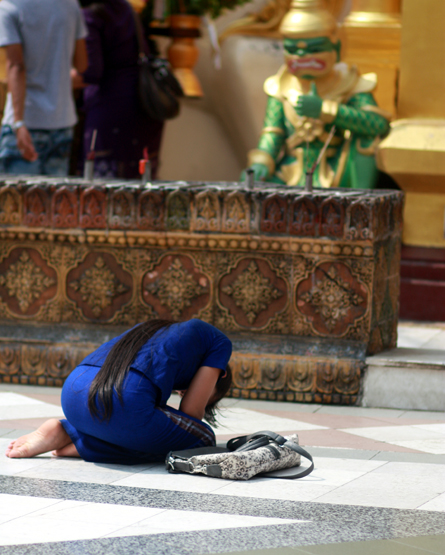 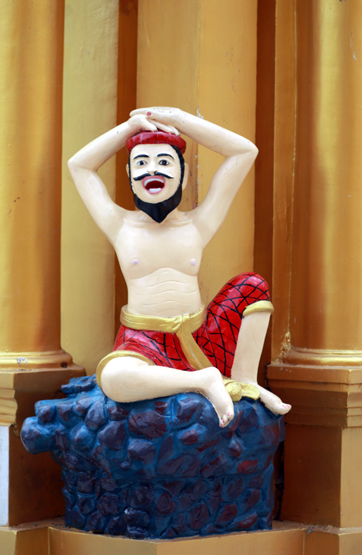 After paying an entrance fee to be able to get inside this marvel of eye- and mind-arresting gold and well over a hundred statutes of Buddha and other gods completely foreign to my mind, I asked the ticket-taking woman behind the desk if she minded if I thumbed through the registration book to get an idea of just who was coming to Myanmar. My assumption was that of all the sites that a visitor might want to see in Yangon before taking a fourteen-hour train to Bagan or Mandalay, at or near the top of the list would surely be Shwedagon Paya. The main stupa, surrounded by sixty lesser ones, rises 120 feet above the platform, on this hill on an otherwise undifferentiated plain that is 190 feet above sea level. I proceeded to slowly run my eyes over some 200 names that preceded mine in the registration book. Of this number a mere nine, or just under ten percent, claimed the United States as their home country. About eighty percent of the remaining visitors were from China, Japan, Singapore, Malaysia, and South Korea. This is not surprising, as all these countries have significant populations with money to travel, and the countries are not that distant from Myanmar. The remaining fifteen percent of visitors were from all over: Italy, Russia, the Netherlands, England, and Australia. Myanmar is not yet that kind of desirable destination that Thailand and other countries of Southeast are to Australians and the British, who seem everywhere and in great numbers in Southeast Asia. The beaches aren’t here, the infrastructure and hotels aren’t here, the good food isn’t here, and the hordes of bargirls who rent access to their bodies for a couple of hours or all night are not here.

To get into the main complex I had to remove my socks and shoes. I stuck them inside my day back. About this there was no choice (as opposed to leaving my shoes at the entrance), since my shoes now contain eighty percent of the American dollars that will allow me to stay here for a couple of weeks.

I entered into the dark and shadowy interior of sprawling stairs and again, as in all these kinds of attractions in Asia, was surrounded by crass commercialism, religion and religious artifacts blatantly for sale. Then I began the slow walk to the top and the main circular area that took in the small and large temples and stupas and other places to rest and pray and engage in contemplation.

And then I found my spot, and began my mischievous little mission. 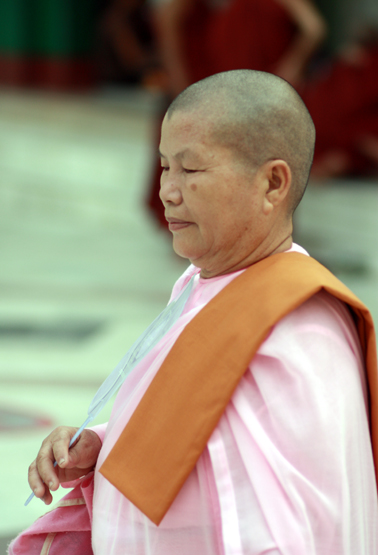 From my Canon Rebel I removed the versatile EFS 18-200 mm lens and replaced it with an EF 85 mm 1:1.8 lens, ideal for close ups, sharp head and body shots and a blurry background. And then I told myself: Okay, concentrate on the monks. The young ones, the old ones, those in their red robes and those in their saffron robes and the little noviates in their pink and white robes. Surely with 200 or more shots I’ll have more than enough for a good opening slide show for my classes in the fall, preceded by a story to the effect that I had shaved my head in Myanmar after seeing that all the monks with their shaved heads. By doing so I could now identify with them, my story will go, and perhaps before long I’ll find myself getting the right karma and on the road to finally understanding that I will return in another life, that I will be reincarnated. And, I might add, with luck I will return as a cockroach, or perhaps a fast mutating bacterium, in either case allowing me to survive the final nuclear holocaust, as humans will not. 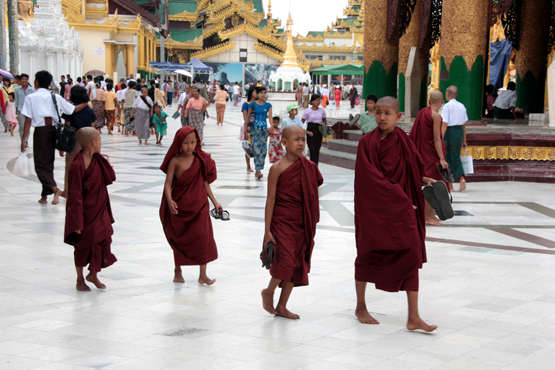 Not a single person that I was aware of objected to the more than 300 shots I took, overwhelmingly of monks. Most didn’t notice as far as I could tell what I was doing, and from all I could tell those who did didn’t mind at all. In more than a few instances, and not for the first time here in Myanmar, when a mother with a very young child saw me with my camera she was eager for me to take several photos of her child, even as the boy or girl turned away and began to cry because of this stranger with a big black thing in his hands who was pointing it in their direction. 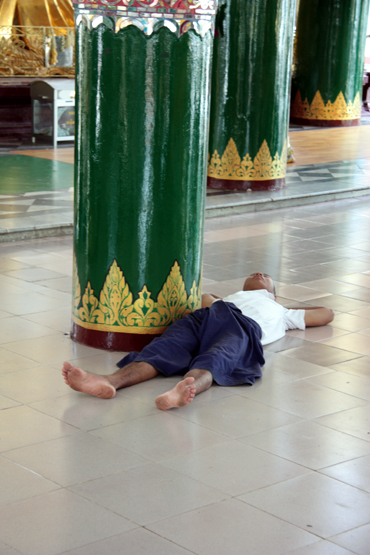 With enough shots of monks now in my camera for a planned bit of mischief, I remembered the time I was in the Golden Triangle in the far north of Myanmar and two young boys in their pink robes came up to me and stuck their tin cups in my face, in the other hand holding up the kyat denominations they expected me to give them. The raw capitalist face of Buddhism, no religion immune. 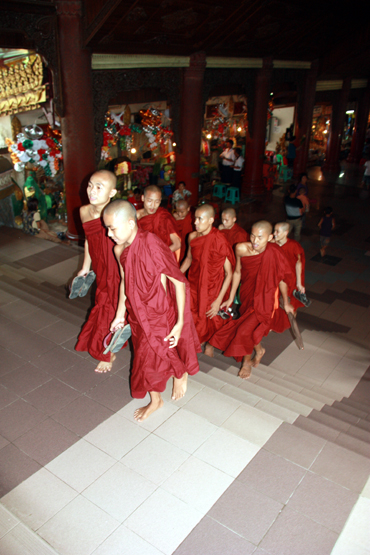 
The monk in the 4th photo down in the sunnies looks kind of like you! 🙂

Would You Act Differently?