A Day In The Life

Several women drag the old lady off the bench where she had been sitting and unceremoniously dump her into a blue plastic chair. It is clear she has no idea what is going on. Earlier she had asked who the monk was (it was your girl's older brother, the old woman's grandson, who was doing penance for having fooled around while his wife was pregnant with their third child). The old lady (your girl's grandma) is in early stages of Alzheimer's and often confused. 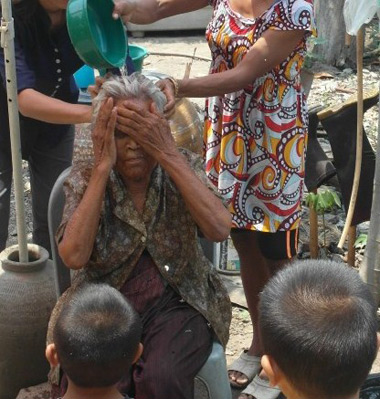 Your girl starts pouring water from a plastic bowl over her grandma as the traditional Songkran cleansing begins. Grandma is fully dressed but as the bathing continues she suddenly opens her blouse and starts rubbing the flowing water over her pendulous jugs. These will be the first of two sets of tits you will see that Songkran day in Isaan, neither of which would belong to your girlfriend.

You go to Isaan once a year during Songkran, which in your opinion is the right frequency. It is important to make the pilgrimage but more than annually is more than you can stand.

It is not the heat, nor the food, nor the lying next to your girlfriend without being able to do anything, but the overwhelming, oppressive, all encompassing boredom.

The drive to Isaan from Bangkok is symbolically similar to the descent into the different world that the region represents compared to the capital. Starting on a new, four-lane superhighway, the road becomes a dual carriage way, then a single road, then dirt, then more potholes than road. In the same way, while in Bangkok you can find TV stations of all sorts, high-speed Internet, world cuisines and five star hotels, Isaan has heat and dust, but happy, friendly people.

The day begins at 6:00, when the rooster crows and the headman gives the day’s weather, news and grain prices over the loudspeaker that booms it's message into every house in the village. By 6:15, like it or not, you are awake and waiting your turn for the loo. Since you were in bed before 10:00 the night before you had your fill of sleep (as long as the mosquitoes and whirring fan didn't keep you awake). 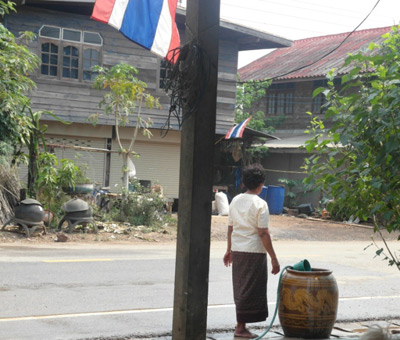 You finally get your chance to piss, in a hole which you flush by pouring a bucket of water down it. You brush your teeth in the same bucket, and venture out to greet the fresh new day.

There is absolutely nothing going on. Your girl has disappeared, the brother is back in the monastery, and you are left with two 8-year old nephews for company. You try out your few words of Thai to their utter confusion. They speak and, cursing your Thai language teacher for a fool, you do not understand a single thing they say.

So you watch the man across the street feed branches into a machine to turn into twigs. This activity will last all day, but you only watch for 2 hours before you are called to eat. In Isaan the concept of breakfast, lunch and dinner, meals at set times with specific foods dedicated to them, does not exist. The food you will eat now is the same food you ate last night, and will probably eat again the next time anyone feels hungry.

After eating, you are now desperate to do something, anything. Let's go somewhere you say to your girl, who responds that she must do this chore or that chore. The beautiful, sexy creature who amazes you in Bangkok has been transformed into a younger version of the old lady who is her mother, and she needs to clean, wash, prepare food and cook. You are not her first priority.

You had slept with her the night before, like every night since you had been there, in a cubicle with no ceiling and a thin wooden wall separating you from her parents in the adjoining cubicle and her nephews on the other side. No one minded your sleeping with the daughter you were not married to and were considerably older than, but she was certainly not going to allow you to "do anything". She went to bed every night fully dressed in the same clothing she had worn all day.

The day drags on. There is a visit to the temple, the drive to grandma where she is bathed, the trip to the market where tonight’s dinner is bought and killed, the ecstasy when the Internet cafe is found (air-conditioned!) and a blissful 30 minutes is spent checking emails until your girl comes and says it is time to go.

You go for a walk with her. Everyone in the village has known her since she was born, and they all greet her by name. Someone says something and everyone laughs. What was that? you ask. She says they don’t think you look as old this year as last. 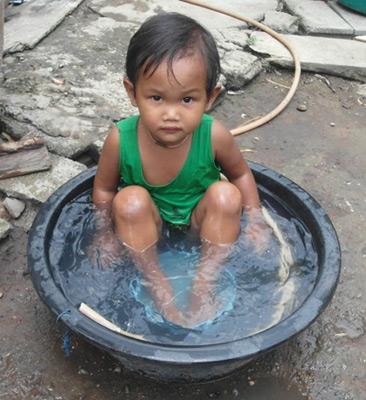 At the edge of the village is a tree. Your girl spots some fruit on an outlying branch, some 5 or 7 meters off the ground. Without a pause your girl, the University graduate with the fancy job in the big multinational, who goes to the finest restaurants in Bangkok without blinking an eye, has shimmied up the tree and is now walking out on the branch. Catch the fruit she cries down to you and she plucks them off the branch and tosses them down to you. My mum loves this fruit she explains as she climbs down the tree, your heart no longer in your mouth, and drops neatly down the last meter to the ground.

You had been holding up going to the bathroom but you can't hold it anymore so you squat and do it the way men have been performing since time began; you cleanse yourself with the same bucket you brushed your teeth in, by dipping it full of water and hurling it upwards against your bum 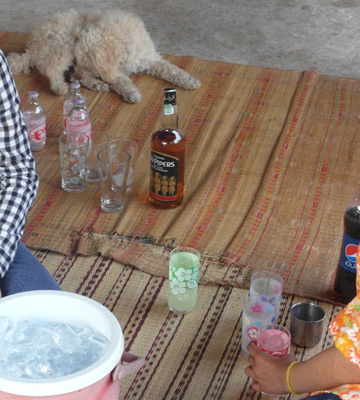 It being Songkran, the liquor has been flowing since breakfast. Bottles of 100 Pipers appear like magic, and ice and soda and Pepsi are liberally added until (fortunately) you can no longer taste the whisky. You and the entire family have had a buzz since 8am and now in the late afternoon the music starts blaring and the water is thrown and the neighbors come to visit and gawk at you and you finally realize that the reason you cannot understand a thing is that they are not speaking Thai but Isaan which is a different language.

The girl who lives next door is completely hammered. She is 22 and does not understand her capacity. She is falling down drunk. Legless. Completely and 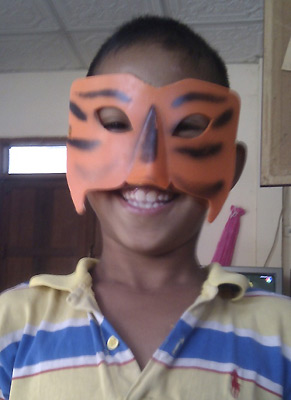 utterly blotto. She tries to stand and falls down. She cannot make it into her house to puke. Your girl and another half pick, half drag her into her house, out of which 5 minutes later her mother comes running, in complete hysterics. You have no idea what she is screaming, but as half the neighborhood is now running to the house you decide to go watch the action. Inside, the girl is flopping around on the floor, pissing herself and vomiting, and then appearing to pass out so violently that all believe her to be dead. Someone (her father?) strips her naked. Not a stitch of clothing (there was a promise of two sets of tits in this story, wasn’t there?). She is now stuffed into a t-shirt, and picked up by 4 people and dumped into the flatbed of a nearby pickup truck. The truck drives off, with mama and papa hanging on.

What is going on? you ask your girl. Nothing, she responds, they take her to clinic and pump her stomach. She do that every week one time.

The sun sets quickly in Isaan. Food is served and more alcohol consumed. The TV is turned on and people, one by one, go to bathe. You look around and your girl is fast asleep on the floor, curled up against her mother, who she adores. Her father is passed out drunk, his two grandchildren asleep at his feet. You sigh and go to brush your teeth, piss and hope you won't have to wake up in the middle of the night, and go into your cubicle. You have done your duty for one more year, one more time, and tomorrow will begin the long drive back to Bangkok. Air conditioning, decent food, and your girl’s warm body naked next to you await. In another year you will go back, and for some unknown reason, you will be looking forward to it.

You capture the feel of an Isaan village particularly well. A very nice sub indeed!

Fear and loathing in Pattaya. Part Nine: East and West