Six months later, here we are, right where we started. The only thing that’s changed is the color of the shirts. If nothing else, the Red Shirts learned one valuable lesson from their arch enemy, the PAD. Violence works! Sort of… That is to say if what you mean by “works” is drag Thailand to the precipice of what could be civil war. Make no mistake about it; this current round of insanity is not likely to end any time soon. Nope. The Reds are “mad as hell” and seem determined to have their way, regardless of the carnage.

Here in the north, the vast majority of people are Thaksin supporters. If the “square headed one” were to return, he would be welcomed as a hero….and re-elected Prime Minister. I’m not just talking about the farmers and the poor. The affluent, educated class is firmly in Thaksin’s camp as well. My darling wife is a quiet, socially conservative lady. Last night as we watched buses turned into weapons careening through the streets of Bangkok, I turned to her and asked her opinion of how this would all end. Her response: “Sometimes you just need to let it all burn!” I won’t even mention her thoughts about things we cannot talk about! Folks, if my sweet tee-rak is taking like this, watch out! Things are going to get ugly!

Here we are in the middle of Songkran. Half the population is falling down drunk, and the other half is working damned hard to join them. Somehow I don’t think the alcoholic haze permeating the streets is likely to help the situation, do you? Crowds can do some unpredictable things. I found that out two days ago. My family and I decided to enjoy a quiet day in Doi Saket, at a lovely botanical garden. Our ride there was uneventful, and we had a wonderful time swimming and strolling through a wonderland of topiary and flowers of every description. Once on the highway back to Lampang, we were immediately caught up in a virtual sea of Red Shirted vehicles heading south. There were thousands of trucks, cars, motorcycles, taxis and tuk-tuks, horns blaring. I thought that perhaps they were headed for Bangkok. In fact, their destination was Lamphun, where the entire convoy ground to a halt. Barricades were erected, closing off all traffic flowing in both directions. Naturally, with my amazing good luck, our truck was right smack in front of the whole line. The barricade was only a few car lengths ahead. Five minutes before we had stopped to buy some strawberries at a fruit stand by the side of the road. Of course it was that two minutes that put us on the wrong side of the blockade! Behind us the traffic backed up to the moon. No one was going anywhere in a hurry. This apparently was the epicenter of a massive anti-Abhisit rally. On a hastily constructed platform, leaders were working themselves (and the masses) into a frenzy in their denunciation of “the evil one”. Obviously I couldn’t understand more than a few words of it all, but my wife was happy to translate. She, while she would rather have been on her way home, was delighted with the words (and the tone) of these speeches. I asked my wife if she minded if I walked around and took a few pictures. I had expected her to tell me not to be stupid and just sit there. Instead, she agreed enthusiastically. She even told me to take along our strawberries and hand them out. Okay, why not? That turned out to be great idea, and the berries were received with many smiles and wais. When amidst a potentially angry mob, it is a plus to be seen as the “nice” farang. Actually I never felt in the least danger. These folks' displeasure was directed about 700 kilometers south of were we were camped out. Here are a few pictures I took. 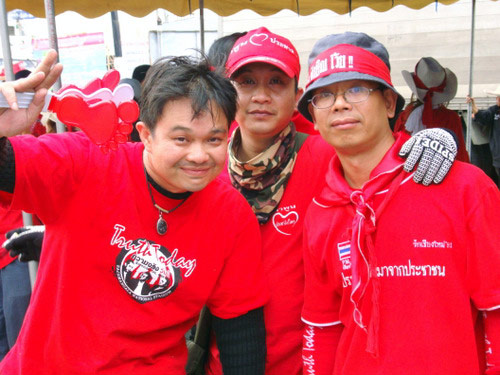 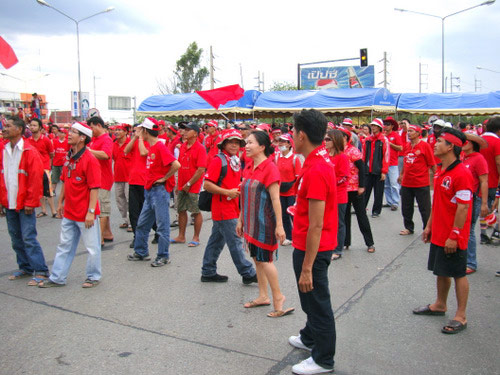 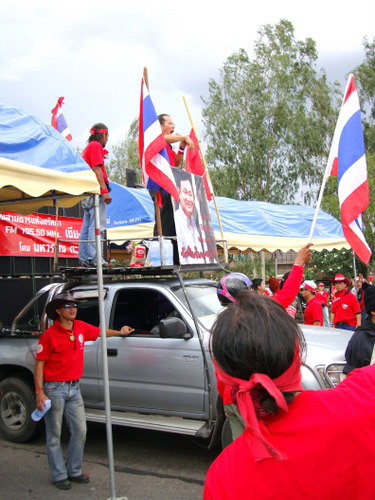 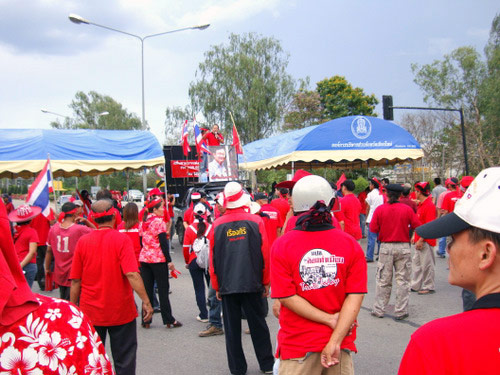 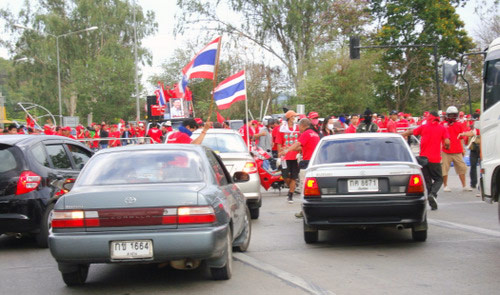 Oh, I suppose I should mention that not surprisingly, the police made no attempt to prevent the North-South highway from being cut off. That was a smart decision, in that I think they would have been on the losing end of any battle. While I didn’t see any of the Red Shirts with guns, I have no doubt that many were indeed armed. I did see plenty of folks carrying cudgels, lengths of pipe and other improvised weapons. They were indeed ready for a fight! What the boys in brown did eventually do is clear a space so that cars could be turned around and sent back towards Chiang Mai. Now it was a real plus to be at the front of the line. Soon we were turned around and on our way on a tour of hinterlands I never knew existed. Picture thousands and thousands of vehicles winding down country roads, over hill and dale, and through hamlets and villages. Oh, it must have an amusing spectacle to the folks along the way who had started celebrating Songkran a few hours early. In the end, it took about three hours to travel the 45 kilometers home, but at least we got there! The next morning I found out that Red Shirts had closed off the highway here in Lampang. Hey, why should they miss all the fun?

As I write this, it is the second day of Songkran. Yesterday the streets were filled with thousands of revelers. Yes, the party was in full swing. Everyone was singing (and drinking) dancing (and drinking) laughing (and drinking) and of course getting wet (while of course…drinking!) I of course was in the middle of it all. While having a blast along with everyone else, I couldn’t help notice that this drunken bacchanalia was going on as the country was on the brink of catastrophe. They say that “Nero fiddled while Rome burned”. Here in the Land of Smiles, I saw no fiddling, but a whole lot of boogying! Revolution? Hell, that can wait until tomorrow…or perhaps the day after that…or whenever!

It is a little scary that the red shirt phenomenon is so strong up there too. In fact up there in Lampang and Chiang Mai is very much a red shirt stronghold.

Has Newin Stepped In It?