The fire at the Santika night club was tragic but it reinforces the point that any kind of safety standards, in Thailand, are sadly lacking or, in many situations, nonexistent.

Before going on I’d like to mention that I work in an industry that lives and breathes safety. The thing is though that it wasn’t always this way. Twenty to thirty years ago, workers were being killed, or seriously injured,
on a regular basis. After the Alpa-Piper disaster, there was a serious rethink of how things were done and one thing that became apparent was that the mind set, of all involved in the industry, needed to change. The emphasis became one of
developing a safety culture where long term thinking was the key to putting sound, reliable safety systems in place. Therein lays the problem for Thailand and the Thai mentality. Thais, by and large, are not long term thinkers. Their tendency,
from what I’ve seen from living here for fifteen years, is to always look at the short term gain.

Care and regard for the safety and welfare of others, is not something that can be instilled in people easily whose mindset is one of short term gain. If it’s taken twenty years to get to the point, in the industry I work in, where
a culture has developed where you not only continually look for hazards, in the workplace, but you also understand that you have a duty of care towards your staff and workmates, what chance is there that there’s going to be a fast change
in the mindset of people in this country? The fact is that it’s going to take a very long time, if it even happens at all.

From the most basic things in life, like driving safely, to the construction of buildings which have / will have a high human traffic flow, the mindset must be one of doing things correctly every time. Sadly, and catastrophically, the
lack of that mindset was not in place on New Year’s Eve at the Santika night club. Live flame in a confined area, without adequate controls in place, is never a good idea. I haven’t read anything yet indicating the size of the
crowd that was in there but one could almost guarantee that the four exit points were completely inadequate for the numbers that were trying to get out. As far as any type of deluge system is concerned, the lack thereof was, more than likely,
overlooked by the licensing authorities once the correct amount of tea money had been paid.

For the families of the deceased, and those who suffered injury, unfortunately there’s little likelihood of any real compensation. Compensation would mean that somebody would be held accountable and being accountable, and paying
compensation, is something that Thais find distasteful. It actually means that someone made a mistake and, as we all know, being shown to have made a mistake means, God forbid, loss of face.

And, just as with all the other disasters which occur because of this short term mindset, lessons won’t be learnt and the same mistakes will be repeated. The opportunity to make a fist full of cash will always outweigh the idea
of doing something correctly. We will continue to see ferries that are overloaded and capsize in rough seas. We’ll continue to see poorly constructed buildings with no proper fire and emergency exits in place; or exits that are locked
because the owners want to prevent thieves from entering. We’ll see waterslides that collapse due to poor, or no, maintenance. We’ll see car ferries which are overloaded with vehicles: the photo below was taken very recently
on a trip to Koh Chang. To make matters worse, the ferry pulled away from the jetty while people were still trying to board. 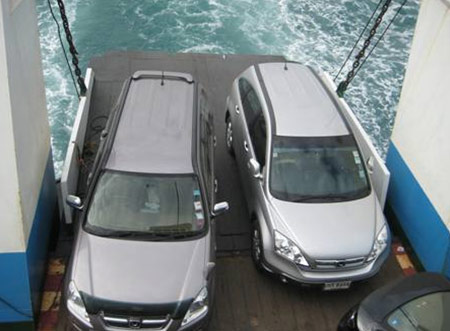 If there’s one thing I’ve learned in all the years of living in this country; it’s being on your guard at all times because most of the locals have a complete lack of regard for anything which is beyond a one meter perimeter around
their own body. This is never more in evidence than when you’re out on the road. The short term mindset takes over and almost every Thai has to try and beat the guy in front of him. That, coupled with most drivers having almost no understanding
of the basic road rules, makes driving here a dangerous undertaking.

Another thing which I’ve learnt is that the average Thai has little understanding of the relationship between cause and effect – by doing X, the result will be Y. It’s almost as though they go through life in five
minute intervals – once again we get back to the short term mindset. Is this a result of the mai bpen rai attitude?

The point I’m making is that the short term mindset is what they’re about. For that reason alone we’re not about to see any real change in the attitude to safety, in this country, for a while yet.

I agree with everything you say. And to make matters worse, when things do go wrong, you're often on your own insomuch that the remedies available are not always palatable.

Cassandra Has No Friends