Do you remember that old paradox, “What happens when an irresistible force meets an immovable object?” I feel the same way in getting involved in a debate between Korski and BKKSW. I have no dog in that fight! However
I do have a few thoughts on “mongering.” Mongering is of course short for whore-mongering. Let’s take a look at what the word represents. To me, whore-mongering is an antiquated term, something straight out the 18th Century.
It brings to mind words like debauchery, orgy and lewdness. I still remember William Hogarth’s work, “A Rakes Progress” from an Art History class. “The series shows the decline and fall of Tom Rakewell, the spendthrift
son and heir of a rich merchant, who comes to London, wastes all his money on luxurious living, prostitution and gambling, and as a consequence is imprisoned in the Fleet Prison and ultimately Bedlam” (quote from the Wikepedia). Here’s
young Tom enjoying himself at a local brothel. 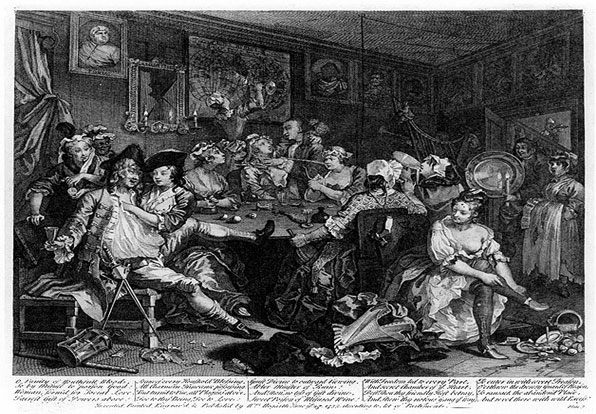 We may be living in the 21st century, but some attitudes remain. Western societies are fascinated with sex while secretly ashamed of it. Hey anything that pleasurable must be sinful, right? The Thais are equally schizophrenic about sexuality. They cover
up their daughters right through high school in clothes that make even attractive girls look frumpy, but suddenly when they reach university, it’s all short tight skirts and blouses. Music videos (and I’m not talking the MTV variety)
feature sexy girls, not wearing much in the way of clothing, wiggling their derrieres in a blatant parody of the sex act.

To this day, for many the idea of paying for sex is an anathema. The radical feminists cry that once again men are “exploiting” women to satisfy their wanton “carnal desires.” Give me a break. If you asked the average girl
in the Thai P4P trade if she felt exploited, she would laugh in your face! But let’s save talking about the girls for later. Let’s stay on the topic of men paying for sex. Asking why they would pay to have “meaningless”
sex with beautiful young ladies is a bit like asking Mallory why he wanted to climb Everest. The answer is simple: “Because it is there!” Places like Bangkok and Pattaya are full of willing young ladies who are happy to provide an
intimate professional service for a “fee”.

Whether we are talking about sex or having the oil changed in your truck, one axiom remains constant. “There ain’t no such thing as a free lunch!” How many times throughout the course of an average day do we pay for what we consume?
It may be a bowl of noodles for 25 baht or a new car at close to a million. The principle remains the same. Several times a year I get my teeth cleaned by my local dentist. Cost? 500 baht. Is my dentist evil for charging me a fee? Am I wicked
because I paid a fee? It sounds silly of course, but suddenly when the commodity is sex, all bets are off. Now both the person selling and the person buying are wicked!

I suppose we need to separate the guys who are here for an occasional holiday from those ex-pats who are living here. For the former, having as much sex as possible with as many partners as possible is a reasonable way to help out the Thai economy. For
those serious girl aficionados living here I imagine it’s more like running a well paced marathon. I cannot speak with any authority on that subject. If I were an unmarried man living in Bangkok or Pattaya, assuming I was
earning enough to live comfortably, I have no doubt that I would want to make the rounds and sample a taste of the nightlife. Would the experience begin to pale as the months and years went by? Who knows? Can there be too much of a good thing?
Those of you who actually live there would know better than I do. All I can say for certain is that the mere paying for sex is not evil! As long as no one is being coerced, no one is being abused, what goes on between consenting adults is no one’s
business. All the moralists sitting there condemning what they don’t understand can just shut their mouths, because I’m not listening!

Okay, we’ve talked about mongering. Let’s turn out attention to the word whore. That has to be one of the biggest insults you can call a woman. The fact that you’ve accepted money in exchange for sex makes a woman the lowest of the
low. You are dirt. You are scum. You are not fit to remain in “decent society” Quick, hide the children! Once again give me a break! There is a reason why the selling of sex is called “the oldest profession.” From the
dawn of history when Og the caveman brought Oam the pretty Neanderthal next door some beads in exchange for a roll in the hay, the idea of P4P was born. Oh, by the way, Oam was not Og’s wife! Many millennia later it’s the same old
story with a different set of words. Men will always want a variety of sexual partners. There will always be women who are willing to provide their services…for a fee.

To me there are other members of society who much more richly deserve the moniker “whore.” First on my short list are politicians. Most will say anything, do anything to be elected, and once elected remain in power. One look at the current
Presidential race in the U.S. gives a whole new meaning to the phrase, “to prostitute oneself.” Is there anyone out there who doesn’t believe that Hilary Clinton wouldn’t sell her soul to devil to get elected? Once
elected, politicians accept money from special interest groups, who in turn expect favorable treatment when legislation is written.

Arms dealers and drug dealers are whores. The former sell weapons to tyrants, often times knowing full well that these will be used to slaughter innocent people. The latter pedal poison knowing full well how many thousands will suffer. In the end, for
both groups, it’s only the money that matters.

For me, it’s hard to compare the mere selling of sex to these others kinds of activities. The former brings a little joy into someone’s life, the latter only suffering and death.

It is important to point out that prostitution differs greatly around the world. There are many places where women, and often times young girls are forced against their will into a life of virtual
slavery. I don’t have words harsh enough to condemn such practices. The situation here in Thailand is a whole other ballgame. I’m sure there are instances where families sell young daughters to pedophiles. These folks
ought to be strung from a tree in the town square, preferably after being castrated! I think we can agree that this is not the norm here. Thais love their children!

For our purposes we are talking about girls who willingly, sometimes enthusiastically enter the trade to make money, and perhaps occasionally snag a farang husband. The type of girls working at P4P runs the gamut of the human condition, from basically
decent to cold, black-hearted bitches. Spend a night out on the town and you’ll see the whole entire spectrum on display in living color. Many of the truly nasty ones would be just as nasty even if they were working at the local noodle
shop in Isaan. Some folks are just naturally lying, poor excuses for human beings. However working in the trade gives them infinitely more opportunities to lie, cheat, drink to excess, take drugs, gamble etc. These gals
are straight out of one of Hogarth’s etchings! Many of them are pathological liars that lie even when it isn’t necessary. The fine girls need a Blackberry to keep their stories straight.
Woe be it to any smitten Farang that hear their Siren song. These guys are doomed to be smashed on the cruel rocks.

That’s one end of the spectrum. On the other are many, many genuinely nice girls. Some have day jobs and want to supplement their income. Some are college students wanting to pay for their education. Others simply are enjoying themselves. Many,
if you are a nice guy and show them a little respect, actually enjoy the sex! I’ve known a few Energizer Bunnies in my time. And of course many are happy to provide the coveted Girl Friend Experience. They enjoy being taken
away on a holiday and being pampered and perhaps adored for a week. A lot depends of course on what you bring to the experience. A lot of guys are content with some bedroom gymnastics. Others enjoy a warm emotional glow. There’s
a lot to be said for cuddling or just walking hand in hand on the beach. As one accepts the “illusion” for what it is, a temporary, delightful fantasy, no harm can come of it.

So when it comes down to it, if I may be so bold as to phrase a “gumpism”, “Whoring is as whoring does.” If both parties involved enter into a little P4P with the right attitude, everyone can walk away happy.

Finally it’s interesting to consider what BKKSW said about Thai women being able to recognize a bar girl on sight. First of all, when you get out of the city, the sight of any farang man with any farang woman raises eyebrows everywhere. When I
first traveled to Buriram with my lovely wife, we got all kinds of dirty looks. (My wife is half my age) Out in the country, a Thai girl in the company of a farang is looked at as a prostitute. Even after being married for eight
years, I always feel uncomfortable when we go to the market.

Then of course, some girls always “look the part”. Think back to your high school days. Everyone always knew who the “loose girls” were. I like the British expression "tart". That seems to fit so well. Some girls
always were, and always will be tarts. They exude that quality like cheap perfume.

Frankly, a lot of working girls, simply look like working girls, and no amount of primping will change that. You could dress them in a matronly outfit that someone’s grandmother might wear, and in the end they still will come off as a hooker! It’s not just what they wear it’s how they carry themselves. There are plenty of girls out there who could fool anyone. They simply don’t
act like whores. What would be interesting to do, if one had the resources to do it, would be to play the part of Professor Harry Higgins. Go out to a bar and find the Thai equivalent of Eliza Doolitle. Give her six months of lessons in elocution,
etiquette, ballroom dancing, in short how to behave like a lady. Then present her to the cream of Hi-so society and see if they can tell that six month earlier she was dancing half naked up along a chromium pole. Now wouldn’t that be interesting!

A lot of really sound comments here. I thought your analogy of the way we have to pay for various products and services and applying that to paid sex was really relevant.

Disgruntled And Dejected No More!