People are willing to risk their lives for it, wars have been fought over its trade and civil wars have been perpetuated for its profit. Opium is perhaps the world’s oldest narcotic, but it has also long been associated with medicinal use and today
is responsible for one of Northern Thailand’s best known tourist attractions – the Golden Triangle. 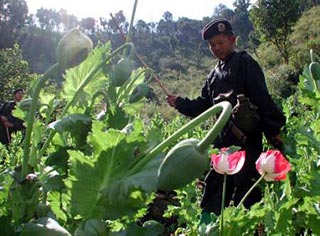 Popular with tour groups, Thai gamblers and ‘visa runners’, the area of the Golden Triangle encompasses Thailand’s northern-most point and includes an historic trading town, plush resorts, a Giant Buddha, one of the world’s
greatest rivers and an extra-ordinary museum that must surely rank as one of Asia’s best. The Golden Triangle itself is centred on the tiny riverside settlement of Sop Ruak – a pleasant four hour drive from Chiang Mai – at
a point where the unremarkable Ruak river spits out into the mighty Mekhong river to form the border between Thailand, Myanmar and Laos. The term was coined by an unnamed middle ranking CIA officer stationed in the region in the early '70s
and refers to a region famously known for producing much of the region’s opium at the time.

As the area stabilised and was able to develop a tourist industry in the late '80s it began attracting busloads of Thai tourists who favoured the cheap shopping across the Burma border at nearby Mae Sai. With the building of a casino across the Ruak
river in the late '90s the numbers swelled. By that time the production of opium in Northern Thailand had all but been eradicated – save for a few pockets under control of drug barons on the border areas further west, but the practice
continues unchecked in Myanmar and Laos. In Thailand it has been replaced with the Hall of Opium, an extraordinary effort sponsored by the Mae Fah Luang Foundation which spectacularly upstages the relic of a museum in Sop Ruak’s town centre
which for years has capitalised on the tourist trade.

The new facility is well worth the 300 baht entrance and can be considered a highlight of a visit to the area, as it thoroughly tells the story of this fascinating substance with multi-media displays, modern exhibits and interesting tales that cover everything
from Queen Victoria’s voice, to the tea trade in London docks and the CIA’s clandestine Air America. Even the moving 200 metre long entrance tunnel (which incidentally is bored through a small hill to connect the entrance to the
main building), is lined with frightening three dimensional addict ephigies, complete with eerie sounds – supposedly to mimic an addict’s bad dream.

The story told within is a fascinating one that dates back millennia, showing the profound influence opium has had on Asia. Drawn from the bud of poppy flower, opium comes from the sap of the one of 288 species of the 8 genus that make up this family
of plants. They range from the blood red which covers the fields of Flanders and was adopted as an international symbol of remembrance after the Great Wars.

As early as the 1780s the Siamese began to recognise the destructive powers of opium and although it was widely used in opium dens, King Rama I was the first to say on record his concern for a nation using opium.

However, little was done to control it. In fact, the treasury was profiting quite nicely from taxation on the trade. Immediately after the Treaty of Versailles a conference was held on human rights and opium trade and use was included on the agenda with
several main European countries signatory to a document calling for its control. When Thailand became a constitutional monarchy after a bloodless coup in 1932 the new government pledged to effectively outlaw opium production in trade, but little
effort was made – attributed by historians to the widespread profiting among high ranking officials close to this government. By the 1960s an estimated 2000 kg of raw opium was estimated at the time to be produced annually.

Ironically it was Thailand’s most evil and corrupt dictator, the ruthless Sarit, who made the first real moves to eradicate opium. But the task was easier said than done. Much of the cultivation of the poppies took place in Northern Thailand among
rugged terrain that was difficult to police. Furthermore, the production was deeply ingrained in local economies, providing a vital income source for the minority hill tribes which were finding subsistence farming increasingly challenging.

They had brought the practice with them when migrating into the area up to a century earlier and found the climate ideal. Initially produced for own-consumption, they soon found a ready market among early traffickers and traders who covered the ancient
routes south. A significant boost to the industry arrived from the Chinese Kuomintang regiments which were forced to flee to Northern Thailand in 1946 after Chiang Kai Chek was ousted by Mao and fled to Taiwan. The 49th regiment, based in Yunan,
was cut off and sought refuge in Thailand, bringing with them tea and opium cultivation.

They were welcomed by the Thai government as allies against a growing communist insurgency problem, and soon established a settlement at Mae Salong – which today is a noted tourist attraction for its tea growing, Chinese culture and fantastic views.
However, the area immediately to the north would later become the private domain of the ethnic Chinese Khun Sa, a notorious drug baron who set about full scale production and trade of opium, using the local hill tribes both to produce and carry
the opium. With few roads out of the villages, little else could be taken to markets than small but valuable chunks of this sticky mass. Although pressure from the Thai army, following an international pledge by the government, successfully dismantled
these ‘drug kingdoms’, insurgency continues in Northern Myanmar as Opium, and recently methamphetamine production, continues to finance a long running resistance by the SSA and Unite Wa Army against the dictatorial regime.

But the success of opium eradication among the hill tribes can be mainly attributed to His Majesty the King, whose King’s Project has received international recognition and is one of the many success stories which have made this long-reigning monarch
so incredibly respected and praised. Initiated in the early '70s under his personal supervision, the project aimed to solve the economic woes of Thailand’s poorest class, while simultaneously weaning them off opium production. The
motivation came from his Mother who had adopted the Northern province of Chiang Rai as her second home and developed the wonderful Fah Luang gardens at Doi Tung – a dramatic mountain on the northernmost border.

She had worked tirelessly to improve the lives of the locals and was particularly concerned with the deforestation of the mountains there for poppy cultivation. The project started with a research and experimental centre at Doi Angkhang. Greenhouses were
built, roads constructed and the locals trained in vegetable harvesting. Cabbages and 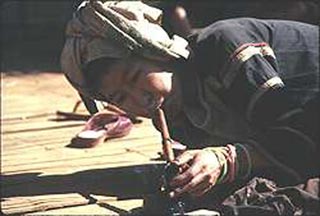 other species that could successfully grow on steeply tiered terrain were
introduced and a market provided for them in nearby Mai Ai. Basic schools were provided, and adults were educated in the ‘evils’ of opium. The area is known today as an eco-destination and provides some of the most rugged border
scenery in the area.

At its centre is a project that produces a colourful and delicious array of flowers and vegetables, with a good access road that even a hired saloon car can negotiate. A highlight of visiting the area is a tour to the border villages and morning spent
in the classes of ‘future tour guides’ – as their teacher proudly explained to our visiting press group. The Queen Mother passed away in 1996 leaving a strong legacy which includes the exemplary world-class museum funded by
her Mae Fah Luang foundation. Meanwhile the Kings Project can be seen all over the North, including the upper Mae Sa valley near Chiang Mai, with its trademark rows of greenhouses. Opium is very difficult to come by now and the livelihood of the
hill tribes and subsistence farmers in the region have improved immeasurably. By the late eighties production had dipped to a record low of 40 kg a year.