George claims he is only 34 years old, but looks at least five years older. He is my designated tricycle driver for the afternoon. I picked him because he spoke reasonably fluent English, not always a matter of course with tricycle drivers in the provincial Philippines. He appears to be a cheerful guy to boot, eager to impress with his knowledge of typical quirks of the local populace, worthwhile sites of interest for the ambitious traveler, and his sophistication of spoken English. The latter he soon takes advantage of to share with me his woeful story.

George used to work in construction. Eight months ago he fell off some second level scaffolding and pierced his abdomen on a two foot iron stick upon landing. Before I can make up my mind about the validity of his pitiful story he lifts his shirt while driving, revealing his gruesome wounds to me. Where the iron stick penetrated his belly a tennis ball sized bubble of skin apparently filled with blood and pus swells from his stomach, with the same situation being the case where the spear left his body again. It’s easily discernible that he’s in pain driving the tricycle, yet he says he has no choice as he’s got a family to provide for and three kids to put through school. He shows me their photos. I sense yet another case of emotional blackmailing, yet I find it hard to avert my eyes and attention from them. He goes on telling me he’s going to have surgery very soon, and needs money to pay for the blood transfusions that amount to 3500 Pesos per pack. Unsurprisingly, he finally asks if I can do anything for him…

Travelling in a country like the Philippines, requests along these lines are frequent and numerous. Sometimes they are put forward in an impertinent manner, sometimes more subtly, yet almost exclusively tied to a sob story of loss and misery, some more convincing than others. If one believes and responds in kind to all of them, one will quite certainly not only be taken advantage of many times, but also run out of dough quicker than an ATM on the Strip in Vegas.

Over the years of traveling the third world I’ve made it my unofficial policy to never just give away money, but give people a chance to earn some if a suitable opportunity arises. So I offer George to be my driver again the following day. If he agrees to it I tell him, he will receive a generous fare and a good tip on top of it. Upon hearing this his face grows dark, and he explains that’s not possible as he has an appointment at the hospital the next day. My gut feeling tells me the guy is sincere, so I make up a story. I tell him I’m a writer for a travel magazine, and if he agrees to it I’ll feature his story in one of my next articles. For that I’d be willing to pay him some extra at the end of the day. Enthusiastically he agrees.

He drops me off at my hotel after nightfall. Having observed me take dozens, if not hundreds, of photos throughout the afternoon, he asks me to take a photo of him on his tricycle, with his wounds exposed to the camera. He says it will make a more credible story this way. I tell him this is not necessary at all, but he insists. So I snap him, and pay him four times the agreed fare for his services this afternoon, 1100 Pesos, a little more than 17 Euros. As he turns his tricycle around and rides away into the night I already feel I should have given him some more. Just pocket money to me, but literally blood to him. 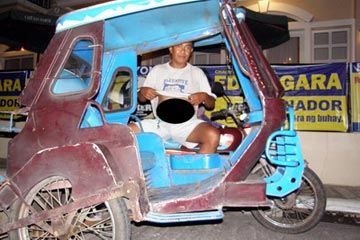 I’m leisurely meandering along the dirt road amidst green rice fields and equally lush patches of pasture, taking pleasure in watching and occasionally snapping the odd grazing buffalo, just like I enjoy doing so much on a dry and sunny late afternoon in the tropics.

The track leads from my remote guesthouse on the outskirts to the unassuming town center, where I’m hoping to find yet another excuse not to dine at my resort’s atrocious restaurant.

On my way through the fields I pass isolated suburban clusters of settlements. Every now and then some people wave at me from afar and kids come running after me exclaiming, sometimes even ritually chanting, “Hey Americano” and “Hey Joe”. It’s good fun, and supports my already cheerful mood. 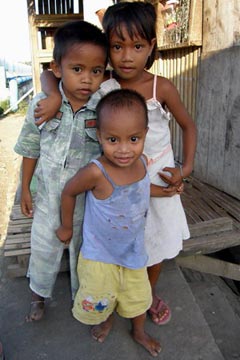 I take my time for entertaining them with in an always promising way, and take photos of them as they enthusiastically strike poses for the camera. I then present the images on the display. As usual this never fails to amaze and elicits laughter and many happy squeals.

I spot a little girl of maybe four years curiously observing the scene from behind a wooden fence a few meters away. She has several serious abrasions on both her arms and legs, stained with dirt around the edges. She makes a very shy impression on me, and looks down to the ground when I smile at her and questioningly point at my camera. I slowly move towards her, but tears appear to well up in her eyes and she swiftly turns and runs for her mother, who seconds later returns carrying her on her arms, looking what her little daughter was daunted by. Upon seeing me she smiles and asks in simple yet impeccable English if I would mind snapping her daughter and sending her the picture. She also explains that the abrasions stem from her dad losing control over the family’s motorcycle a week ago. I gladly oblige and give my promise. Upon seeing her image on the display Sue’s face undergoes a radical change from first awestruck to then enthused within seconds. Gone are the tears, and her eyes sparkle with joy, as are mine…

“The bus will leave as soon as it fills up with passengers!” the ticket vendor in the ramshackle hut that passes as the local bus terminal informs me competently.

I glance over at the two rusty minivans of Koreans making and what appears to be their dubious drivers who both lie flat in the front rows of their respective vehicles, their dirt 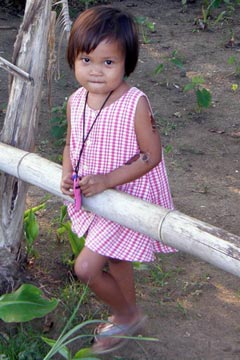 stained feet dangling from the passenger doors. There’s no other prospective passenger to be seen anywhere.

“When did the last van leave then, and how long did it take for it to fill up?” I inquire.

“It left ten minutes ago, and it took three hours before that!”

Great! Just the answer I was hoping for! I grab my daypack and meander through the alleys of the nearby local village market, marveling about the immense variety of colorful local produce it has on offer, but eventually it is a tiny stitching shop featuring two antique looking sewing machines sitting on an elevated chipboard that really catches my attention. Its owner invites me to sit with him and his three little kids who share the narrow space with him during his hours at work. He claims in perfect English not to have had any business so far that day, and therefore welcomes the chance of diversion with a stranger from foreign lands. His kids are one, two, and five years old. He introduces me to them and tells me their names. They eyeball me curiously as they are sitting there apathetically, not making the least noise.

“Where’s your kids’ mother?” I ask the dressmaker.

“Oh. She ran off with another man three months ago, leaving me with the kids” he casually explains as if that was just a matter of course and not in the least bit out of the ordinary.

“That’s why I have to keep them here with me while I’m working. There’s nobody else to watch over them at this time of the day.”

I decide against any more nosey questions, but ask his permission to take their photo. While doing so I hear the ticket vendor shouting in an authoritative voice: “Hey, Americano! Hurry up! Van is leaving now!”

I’m in luck after all I’m thinking, until I’m spotting the nine voluminous ladies stowing large packs of dried fish into the back of the van. Needless to say, I was in for one smelly ride. 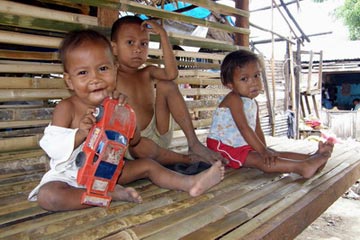 It’s past 10 PM, and I’m returning to my rickety nipa hut at the very friendly and isolated “Kokosnuss” resort, a mere twenty minutes walk up the main road from Coron’s lively little town center. I’m dead beat after a day of driving my rental dirt bike up and down the dusty tracks of the island, snorkeling in its azure blue waters off the coast, and finally chilling in the natural hot springs on the outskirts of town.

The first thing I notice upon unlocking the door and switching on the lights is him, an unlikely guest. He’s squatting in the middle of my bed as if intending to dispute my right to a good night’s sleep. Yet having to unpack my bag, undress, take a shower and brush my teeth I’m ignoring him, but head straight into the en suite bathroom instead, thinking he probably will have left by the time I reenter the room.

Stepping out of the cold water shower I spot him immediately. He’s right there, clinging with his long fingers to the seat of the toilet, gawking at me provocatively, as if he means to say this place is his. 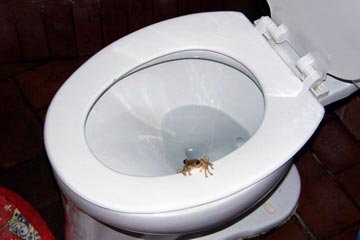 Needing to whizz before going to bed I sense there’s no option left but to challenge him. Upon tapping my finger onto his back he takes a flying leap and is out of sight. Good riddance I am thinking, the hut’s mine again, at last I’m the king of my castle.

Finishing the bathroom business I go to bed and doze off almost instantly. In the middle of the night I wake and briefly open my eyes to peek at my watch. And what do I see from the corner of my eyes? It’s him again, squatting a few inches besides me on the bed, and in the exact same spot as I first noticed him upon entering the room. Generally unwilling to share my bed with anyone but a charming girl, and out of fear I might accidentally crush him the next time I turn around in my sleep, I once again send him flying by tapping on his butt. Puzzled at this little fellow’s devotion to me I drift off again to dreamland, and sleep through until next morning. My first glance of my sleepy eyes is directed at the spot next to me where I had seen him sit last. He’s not there. I’m wondering if I dreamed it all.

Three days later, 100 miles to the South on a different island in my bungalow at Dolarog beach resort, El Nido. I wake up early to have enough time for a leisurely breakfast and preparing for yet another promising day of island-hopping and snorkeling ahead of me. Stretching my stiff limbs pleasurably while still lying in bed I turn around, and guess who squats there gawking at me again. 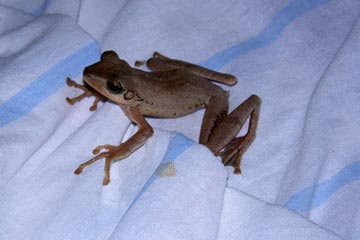 Making A Drama Out Of A Crisis