Just recently happened upon your site and spent many hours entertained by some of the twisted and not so twisted tales.

I myself have visited Thailand very regular for about ten years (30 + trips) as I'm from Australia and was working in Europe I would always stop over, sometimes a week sometimes a month.

I have traveled extensively through Thailand just about seeing and experiencing everything this great place has to offer, being burnt by women and sometimes loved (noi) a little. So it was time for the Big fella to venture out to new locals and experience for the first time the Philippines.

My trip began in Mid January flying into Manila collecting my gear and jumping straight into a cab heading straight to Angeles.

The cabbie was a nice fellow and because it was midnight before we took off locked all the doors and advised me to place my valuables out of site, this made me feel a little uneasy but a few minutes later I was calm and settled back and relaxed for the 2 Hour trip.
On my arrival I checked in to the hotel and packed away my kit then headed out for a drink or three, the bar set up is pretty much gogo bars although great fun and many many stunning women I do prefer out door bars.

Over the next week I proceeded to party fairly hard and give the hotel bed a challenging time, after the week of this I was fairly all beered out and needed to move onto my next stage of the trip. 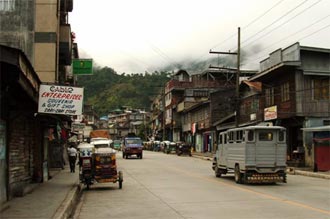 This is where the trip really started for me as I like to travel to many places when I holiday, so with this in mind I was off to discover the North of Luzon.

First Stop Motor bike rental shop to pick out a bike to make the 1,000 or so km trip, I Knew their would be some dirt roads and challenging terrain I decided on a 750 cc road / trail bike (over the trip proved to be the perfect choice.

Sorry I forgot to mention I had some additional luggage my honey Ko (peso girlfriend) was also to be strapped to the rear of the bike, O.K, I'm fueled up and ready to hit the road.
Now I will say this if you have ridden a Motorcycle in Thailand its pretty much the same deal, my best description of ridding in these two countries is its like riding in the bush and the trees move – always expect the unexpected.

Now with a reasonable idea off where we were going and my very handy lonely planet book (I found out there were better books available at the end of my trip), our first port of call was Subic Bay for one night stop over.

Subic bay was a U.S. base in the second world war and has a very interesting history, it mainly attracts Divers wishing to dive on the many sunken war ships that sit on the Bays floor. 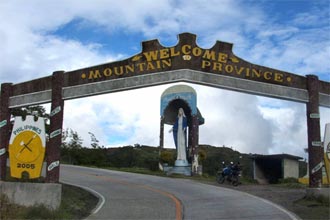 Next morning up bright and early for the next stage of the trip which is around 250 kms up the west coast to Aliminos and then 100 Islands National park, the ride is great and as along time rider of all sorts off bikes this is right up there in the top 10.

Our next stop over is at Lucap just out of Alaminos just on the edge of the 100 Island National park, a nice meal and a few beers at the local restaurant and I was fairly nakered from the ride so a early night was in order.

Next morning up to a raining morning and a little breakfast then straight into the Banka Boat for a four hour tour, we where also looking to catch some fish so a little fishing (no fish )then we Island hopped a little.

After about two hours my little honey Ko was getting very sea sick and just wanted to touch land, so me being the gentleman decided to head back to base and let her recover.
We decided after a little rest to carry on our way by this time it was apparent my little friend was not so happy on the back of the bike, I must admit either was I as I'm a big fella and she a solid girl one had to give.

The next stop Bus stop and she pleaded with me to stay but I just could not handle one more km with my nuts banging on the petrol tank, so I funded her trip back to Manila with a bit extra for the four days or so she had free.

Now I was free to wheel stand my way around Luzon, with my new found freedom I was in party mode yeee haaaa my next stop was Southern palms in La Union for some beer and hanky panky.

Next morning up at sparrow fart and head for the hills this is really where my trip starts, the first town at the base of the mountain province is Bagio a very nice area with a fantastic vibrant peoples. 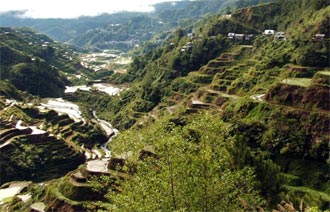 Now I was stocked up and ready to climb these mountains, to give you an idea of elevation my destination was about 5,000 feet above sea level and my distance to location was 90 Klm’s.

The road is very winding and some of the corners are blind so I was moving at a fair speed but not more than 6/10 th of my ability, after about 40 kms the road turns to dirt and is quite rocky.

At the time I hit the dirt it started to rain lightly and the road became narrower and more challenging, over the edge of the road was some shear drop off’s possibly 300 –400 feet .
At this moment in time I was feeling pretty good I would almost say that I had not felt this good in a long time, for me it was a perfect place to be.

Well I'm still climbing the mountains and really starting to push the bike a little, I had not ridden a dirt bike for more than twenty years mainly big bore sports bikes over recent years. 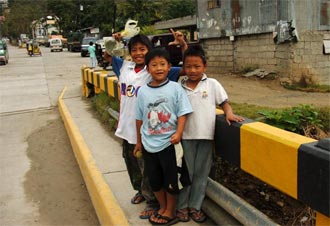 I was passing through many small villages small groups of students on holidays and basically Normal Mountain life, I stopped for a few feeds and some souvenirs and talked to some locals – it was nice.

By the time I had reached my destination I had covered approx. 90 Km in about 6 hours, I arrived in the town of Bontoc at about 6.30 PM and found a place to stay right on the river (spectacular).

A nice meal a few beers and sleep was the next priority, this day was one of the best I have had in a long time – Utopia.

Next morning up and atom I was feeling sharp and ready for another challenge in riding, my plan this day was to pace it up a little and cover some distance.

The next section of riding was a 47 km stretch of road / track to Banaue, this town is regarded as the capital of the rice terraces and is spectacularly placed in deep valley.
I stopped for a late breakfast at the local restaurant called Peoples, this place was perched on the side of a cliff / mountain and when you looked over the balcony its just spectacular its really highly rated some say the eighth wonder of the world.

The next leg of the trip was a big one I was going to try and make it back to Angeles this day, so I was off and from this point on the road improved considerably and so did my need for speed.

Well after passing through many towns and viewing some more of this nice country side, I was back in Angeles with a sore ass and some great memories of a trip I will repeat again but with a longer time frame.

After a few more nights in Angeles I'm planning a few more locations i.e. Cebu, Bohol, but the bike trip was my highlight and I would recommend it to the adventure minded traveler.

A few Tips for the trip.

Bikes available – www.nice-bike.com the owner is very helpful and maintains the bikes well, he also gives you two tubes and some tools to take. A- 1


Riding equipment – take your own Helmet, leathers, nylons and boots.

Riding level – I would rate this as intermediate to expert, if you’re a beginner go with someone at least.

Have a safe trip

P.S Just like Thailand there is a great variety to see and do outside the standard destinations.

In many ways I wish I had visited the Philippines in the past. It is unlikely to happen now.

Delightful Cambodia – You Are Welcome (3)

The Outside Looking In