She told me "Ass Cracks are In"

In a way my life is all about ass cracks. Two years ago a customer came into my restaurant in Farangland and Evorah was bending over to pick up some product or retrieve something and you know how she always wore her jeans low and her ass crack showed. A slightly drunk redneck customer commented on the inappropriateness of her showing flesh. She flushed, she was pissed. She told him "ass cracks are in!"

I guess, Evorah even as a child never was shooting to be Martha Stewart or Mother Theresa.

A night with Evorah was like the out takes from the movie "Pulp Fiction."

What Evorah is never changes but who she is changes by the minute.

I went to Thailand to get away from Evorah my Cajun Queen.

I went to start a new life far away from all the things that reminded me of her.

I wanted to go to Thailand to find women like I remembered women to be. Feminine women who genuinely liked men. Beautiful women who still looked like women, still smelled like women and acted like my outmoded view of how women should act.

It took me three days to realize I had not come to Thailand to run away from Evorah but to find her. 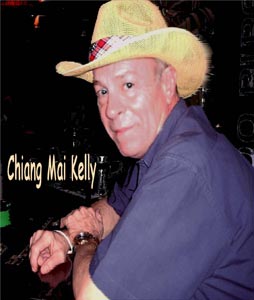 I have seen thousands of beautiful women in my life but in my first three days in Thailand I was reborn in a sea of raven haired beauties that bent, stooped and moved in such a way to expose just for me or another man the veritable bounty of beauty that lay above the buttocks and beneath the waist.

But as with Evorah the ass cracks were just the tip of the iceberg. It was the third day. It seems like a century ago now, my first Thai disco.

The disco was in a hotel and at the door to the place were three large smiling but menacing looking men with metal detector wands and a dragon lady with the cash box and a sign that said no drugs or guns allowed.

After I paid the cover the guys with the wands checked me for guns and drugs.

Wandering in I was first impressed by the sound system. I had expected something more primitive. It was early and it wasn’t crowded. I sat down at a table and lit a cigarette and received my free beer that was included with the cover charge. As my eyes adjusted to the darkness and the flashing lights I saw a stage with 5 girls dancing.

Not strip club dancing but Go Go girls in disco clothes. I realized as I watched that the numbers were choreographed and that there was a conductor directing their moves from behind the bar. Kind of like cheerleaders. As they danced they emitted screams and cheers and did their moves all in perfect harmony.

I had been in a rush to find Evorah or escape her when I walked in but a calm seemed to be finding me as I sat back and enjoyed the show. The sounds of a local popular song finding a place in my mind.

I was beginning to realize this was bigger than me and I was just along for the ride.

The show was too good and the girls were too pretty and I was too new in Bangkok.

I waited for the elevator up to my room which was in the same hotel as the disco.

The girls from the show came bouncing and giggling out of the club and bounded in the elevator with me.

I got to think 8 floors worth of thoughts.

It dawned on me that they must have a changing room in the hotel and it was a coincidence that it was on my floor.

I screwed up my courage as they got out of the elevator congratulated them on the show.

I didn’t know if they understood me in my few words of Thai and English. Words of praise for the quality of their dancing and the length of the sets. God, they danced an hour a set. I felt awkward talking to them because they were so young and so Thai and so beautiful.

Four of the girls continued off to a room to change costumes. One lingered, she said as I approached my room. "Hey, lovely man! If we so good how come you leave show?"

I smiled and said, "I am old and you are young. It's like a child looking at candy he can’t have." She smiled, nodded and walked off. Turning the corner she repeated her mantra “You lovely man, you know?"

She told me her name was Yu.

I knew then I had won or lost.

I knew not which.

Knowing that at least.

I tried to sleep and that didn’t work and I set out in the hot Bangkok night.

Streets that I didn’t know.

Bar names that made no sense.

As I walked by the girls said hi.

I knew something had to give.

I needed to see the inside of a temple so I wore long pants. Can’t wear shorts in a temple. One temple led to another. A kind of temple reference thing. One monk passed me off to another monk and another. Pick a tuk tuk driver with lots of Buddha stuff on the dash and they get you to the temple come hell or high water. I think there is actually a Wat Whatever in Bangkok. They knew of my quest. Each tuk tuk driver had been there a hundred times. I was just a guy and they were just guys and I was messed up and they were messed up and we had that in common. Naw, they weren’t going to rip me off. They could tell I was in in hell.

I kneeled down and lit incense sticks and held them to my head. The monk splashed water from a silver bowl on my bowed head. It was hot and the water felt good.

The words came from the mist at first.

Then louder and I had to stop my mediation to recognize them. I wondered if Buddha was speaking to me.

I was gone. No return for me.

So Yu and I had breakfast & I gave her a hug.

Not much between despair and ecstasy
One night in Bangkok and the tough guys tumble. 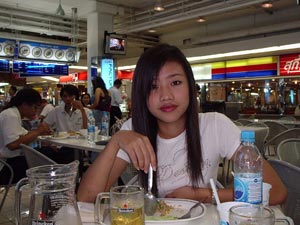 Yu, no makeup, little sleep and of course beer for breakfast.

Do you usually drink Heineken for breakfast?