Back onto the bus which had almost become a second home by now and which had saved me plenty of $$'s. We were approaching Saigon, and even on the outskirts of the city the difference between her and her sister in the north were very plain to see. Once again the pace and the bustle of a major Asian city was there, completely the opposite of laid back Hanoi. Avoided the touted hotel and trusted my travel bible and booked into the Hotel 64 which just happened to be around the corner from where they dropped us off and I virtually walked into it while being harried by the other touts. Very pleasant place, once again within the budget of $ 10 and including breakfast, dinner and free tea, coffee and bananas. The staff were also good and spoke English well, just what I needed to arrange my final travel plans. An added bonus was that the only compatible ATM was just around the corner. Before I did anything I needed to sort out my finances which were at a critical low. I always seem to have this masochistic way of running short of funds when travelling?? The flight to Bangkok was far more ($ 165) than my original flight to Hanoi ($ 117). This might sound petty to those of you earning $'s, but when on a tight budget it hurts. For some reason I could not phone out from the hotel and had a cyclo take me to the local post office where I managed to get a call through to South Africa and arranged for them to transfer funds to my account all the while hoping that my card would work in the only ATM. Sat at a street bar and had my first couple of beer Saigons and then went to the ATM. It seemed to take forever as the machine pondered whether to give this foreigner some fiscal relief, but then with a whirr and a few beeps out came the wad of Dong (2 million to be precise which was my daily limit) and for a while it felt good to be a multi millionaire, albeit in Dong.

Paid my hotel upfront for the remainder of my stay and arranged that they book my flight to BK. Now that money matters had been attended to I was free to roam the city and take in the sights. There was an animal market listed in the guide that would have been interesting, but due to my previous experience I felt that I might not take a cute poochie as a pet but rather as dinner! Gave that one a miss and rather went for my other passion, military matters. The War Remnants Museum, formerly known as the American War Crimes Museum, is well worth a visit. As with the shocking photos coming out of Iraq today, so one is reminded of the crimes committed against the Vietnamese people. Frustrated at being unable to distinguish between civilians and combatants, Charlie Company swept through the 4 hamlets collectively known as My Lai and in a four hour massacre killed everyone in sight. Most of the victims were children and the elderly and the graphic photos were a nauseating reminder of America's involvement in (and running away from) various Asian conflicts. I make no apologies for my writings having seen the horrors of the millions of mines scattered by the US in Cambodia as well. Having promised their "Allies" so much, they would leave behind all the shit they had caused and those that had helped them. Photos of US soldiers proudly showing the decapitated heads of the enemy, bottled foetuses of deformed children due to agent orange and the "tiger cages" used for holding prisoners did nothing to endear me to Uncle Sam. Many soldiers actually returned their medals with letters of apology to the Vietnamese people. With their forward looking attitude and lack of hate towards their former enemy, one has to take your hat off to the people of Nam. The museum as a whole is a very interesting place and displays plenty of captured ordinance and showcases the anti-war demonstrations from many countries.

One finds military hardware all over the city, especially in front of Government buildings, where the tanks that the NVA used to enter Saigon are displayed. Wandered around the city and went off the beaten track to drink beer with the locals and watch the world go by. The evenings were spent trawling the pubs and checking out the talent. Enjoyed Guns and Roses bar with a large painting of Axl Rose on one wall and G&R's music belting out. Was approached by a girl who I bought a beer for and she joined myself and another Farang with whom I was chatting. After the usual small talk she whispered in my ear that she was available for $ 30 and although she was OK looking, I declined. After more talk she now dropped her offer to $ 20 but I again politely backed off. "OK, I like you much", she said and gave me the $ 10 option. My older companion heard the offer and jumped at the chance and I smilingly left them to pursue some Saigon Sin. There are plenty of temples, pagodas and lovely buildings to keep those interested entertained for days but I mainly enjoyed getting myself hopelessly lost by just walking the streets and eating and drinking whenever I felt the need. Being a rugby fanatic, I needed to find a place to watch the international Tri Nation match between SA and Australia and eventually saw an ad in the local English paper that was going to show the game. Cafe Latina was situated in an upper class area and although the beers were many times more expensive I had no choice. The waitresses were however pretty and that made the pain bearable. Lost the game (Dammit!!) and I tried to chat to one girl who got my attention. She was more reserved than the rest but could not speak any English. The bar lady who could speak English but who was not a looker got peeved off when I asked if she could translate. "You like her not me, you talk her!". She gave me her e-mail address and when I got home you can guess what happened. Mother very sick, please help etc etc, all in good written English. When I queried her about the language, she claimed that she did not want the other girls to know she could speak and write English. Yeah Right! She only needed $ 500 and that I could transfer it into a German Bank account in Hanoi??? Sorry lady and Hans the boyfriend, I was born earlier than yesterday.

On the way to another club, my moto was suddenly surrounded by 4 moto girls and their travelling tit bits, who all the while jockeyed for position and called out their prices. Very tasty and tempting but I had budgeted to the last dollar and would be leaving the following morning and did not want any distractions at this stage off the trip. After a month of hard travelling, home was calling and as much as I enjoyed my trip the thought of a large tender steak and a bottle or two of good red wine had me salivating like one of Pavlov's dogs (have to get rid of this dog thing!). Wished the staff at the hotel farewell and got a moto to the airport. Booked in early, paid the airport tax which left me with the princely sum of 5000 Dong in my wallet and finally boarded for the flight to Bangers. Another very pleasant flight and back to my friend Don Muang (who or what was Don Muang in any case?). Drew some Baht at the airport ATM and as I had 10 hours before my flight home I was very, very tempted to shoot into town for some fun, but reluctantly decided to wile away the time and stock up on Thai eye candy. Boarded my flight back home, consumed a lot of good wine and slept through the 12 hour trip. I will be back…….

Given up on my looks, now working on my character. The Author on the steps up to Wat Phra That Doi Suthep, Chiang Mai, circa 2002. 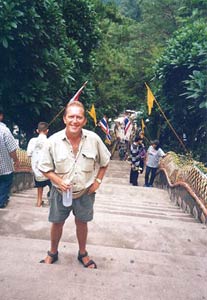 What?! Aren't Vietnamese ladies your type?!