Protests took place in many parts of Bangkok today in what seems to be a mass protest Sunday.

What follows are general observations and thoughts after spending a couple of hours at Siam Square where many thousands protested outside the gates of the Royal Thai Police Headquarters. 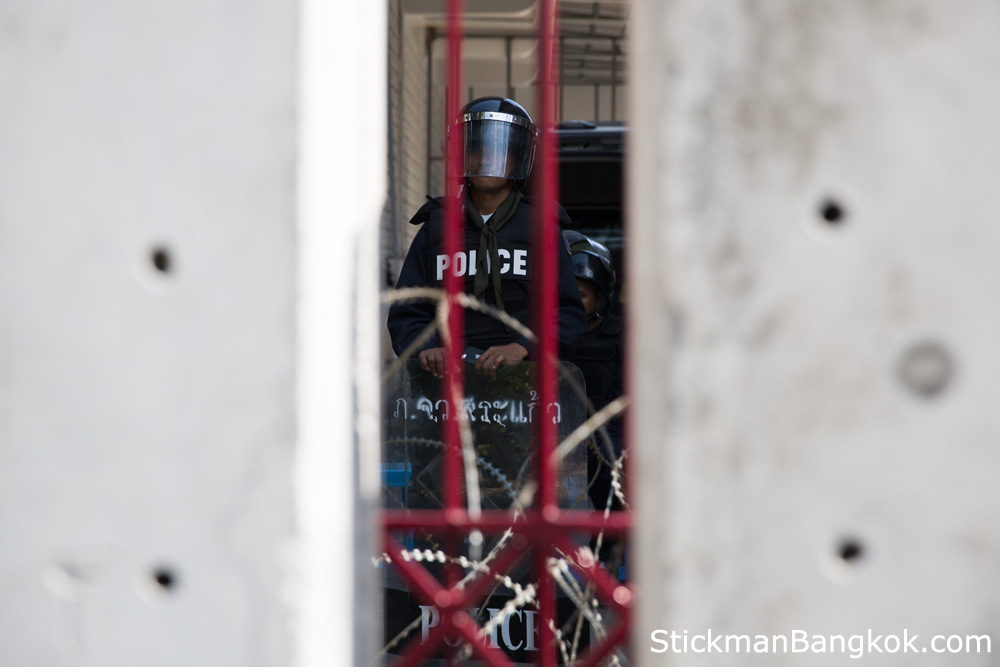 There were many police in the area, patrolling the Rajaprasong and Patumwan intersections – but the largest numbers were inside the Police HQ compound. 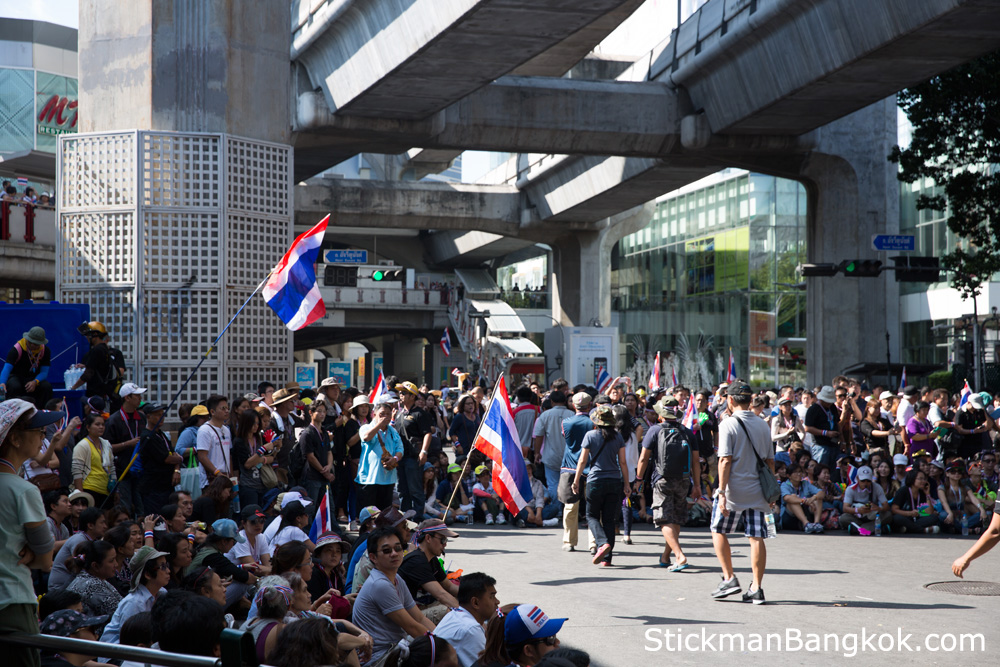 The Siam Square area was taken over by protesters, one of many sites around the city where the protesters were in full voice, making their thoughts very clearly known. 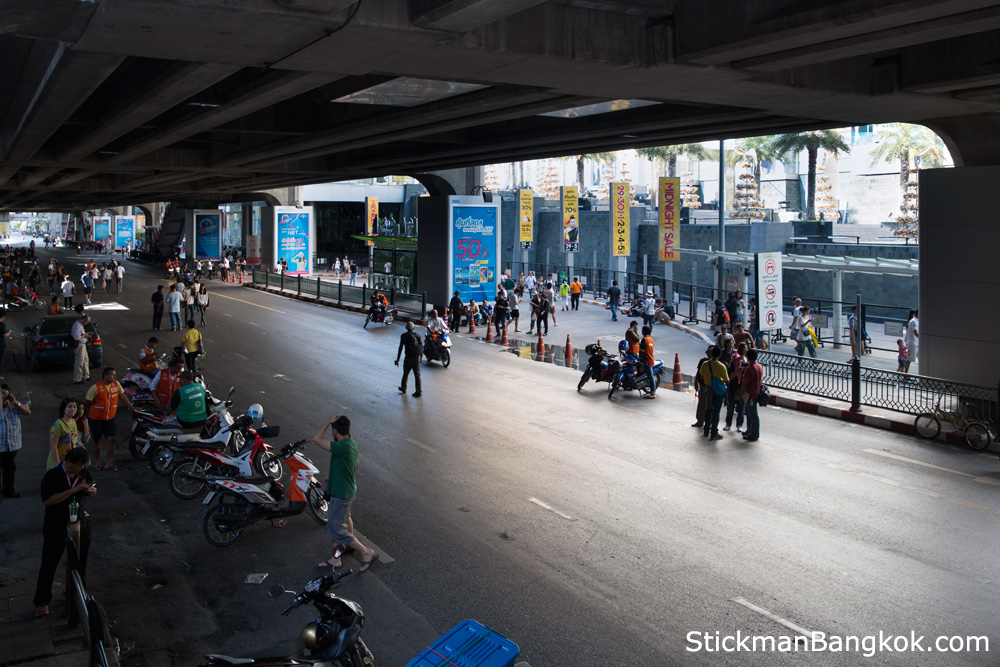 Much of the Siam Square area was closed including the major shopping centres of Siam Paragon, Siam Centre, Siam Discovery Centre and Central World as well as most shops in the sois that comprise Siam Square itself. I never did make it to MBK so don’t know if it was closed or not. 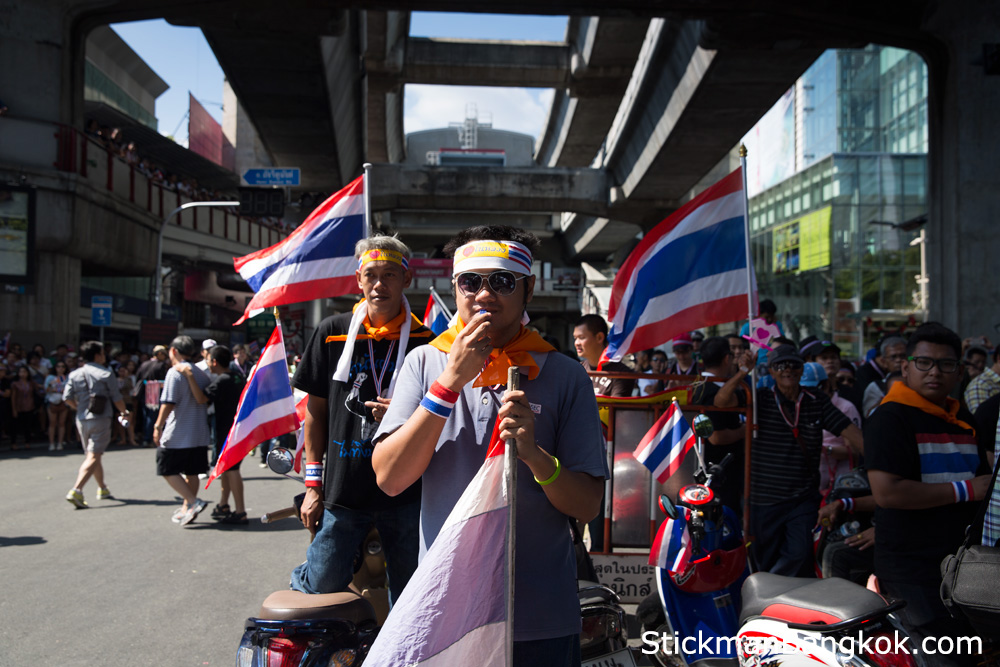 Central Chidlom was open and it was business as usual – no doubt they did a booming trade as people were paid on Friday and the weekend following pay day is always busy for retailers. 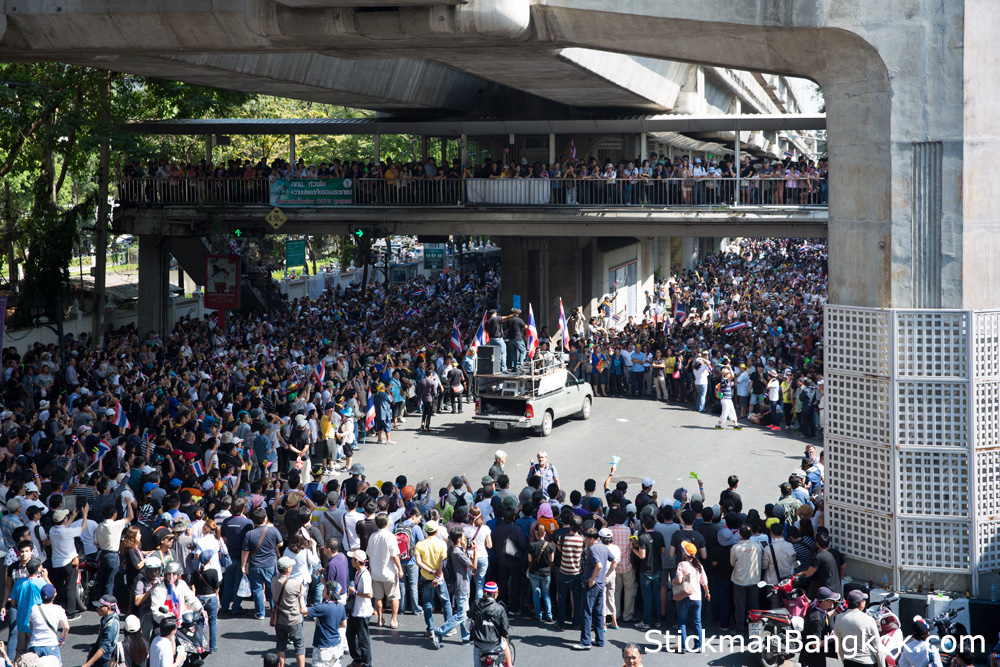 There were two temporary stages set up in the Siam Square area – each on the back of a truck – one at the Henri Dunant intersection and one right out front of the main gates at the Thai Police Headquarters. 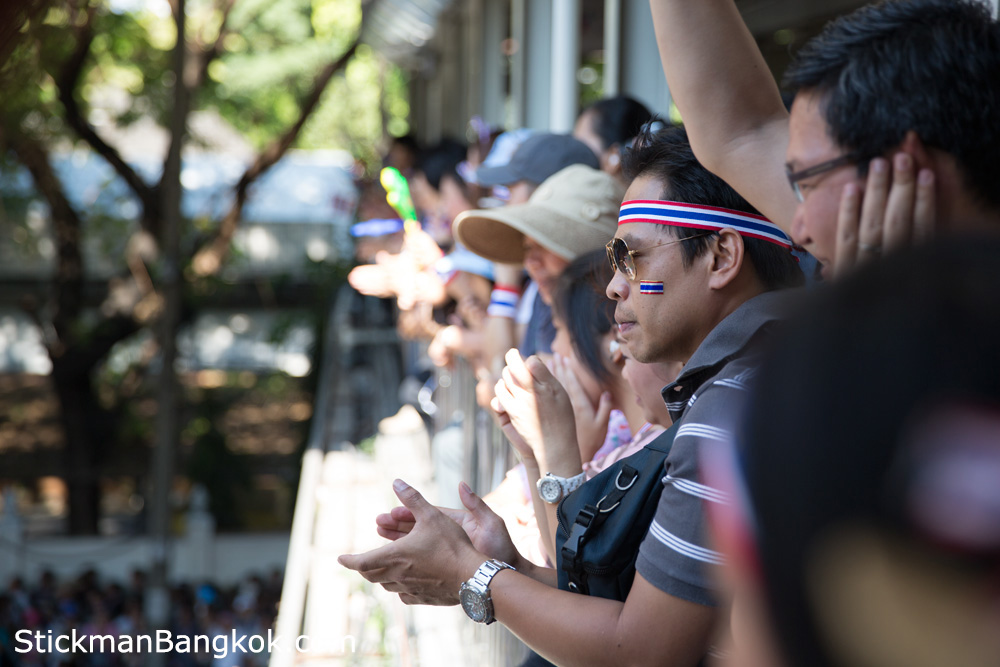 The crowd would periodically erupt with applause as thousands – maybe tens of thousands – clapped, cheered and blew their whistles making a quite incredible noise. 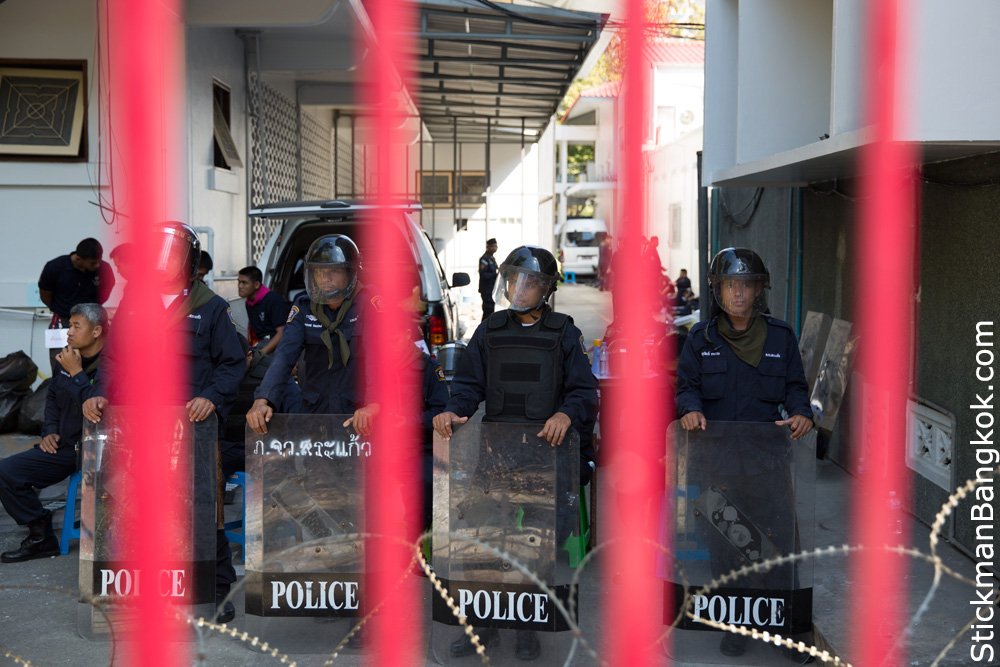 Every entrance / exit in and out of the Thai Police Headquarters was blocked with huge concrete slabs on the outside and razor wire on the inside. 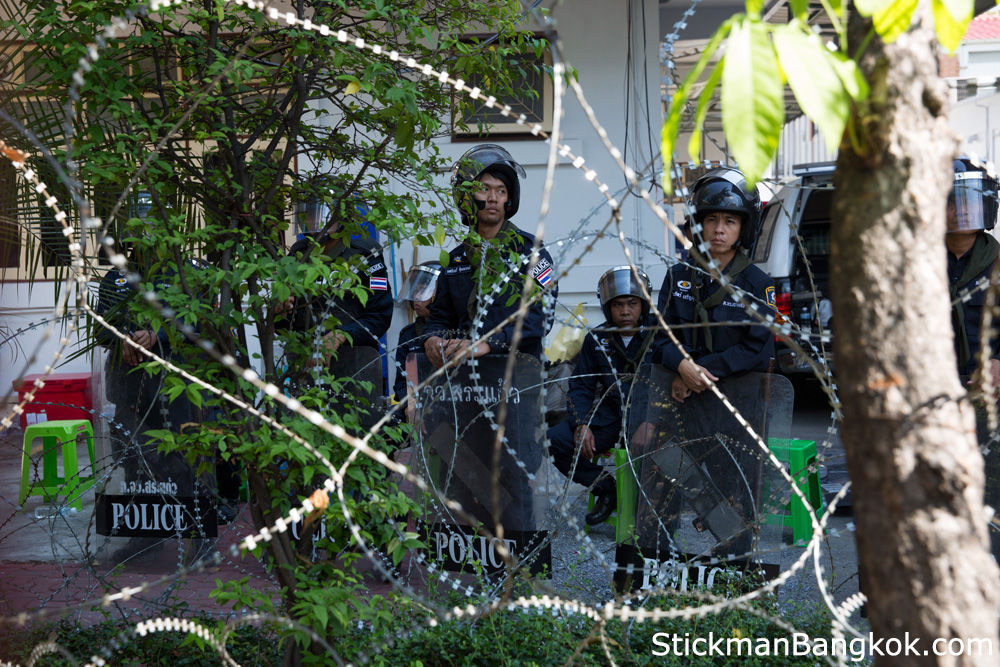 The cops stood near the fortifications and it was interesting to observe them. Some were relaxed, laughing and joking with colleagues while others were tense and looked quite concerned. I couldn’t help but feel sorry for them for you could see in the eyes of some that they really didn't want to be there. 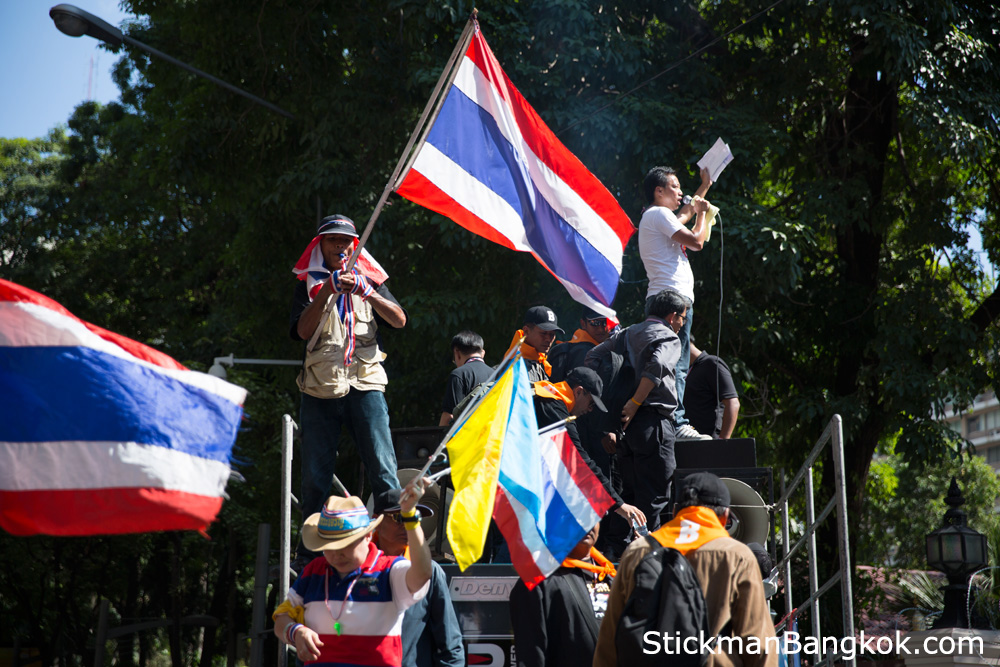 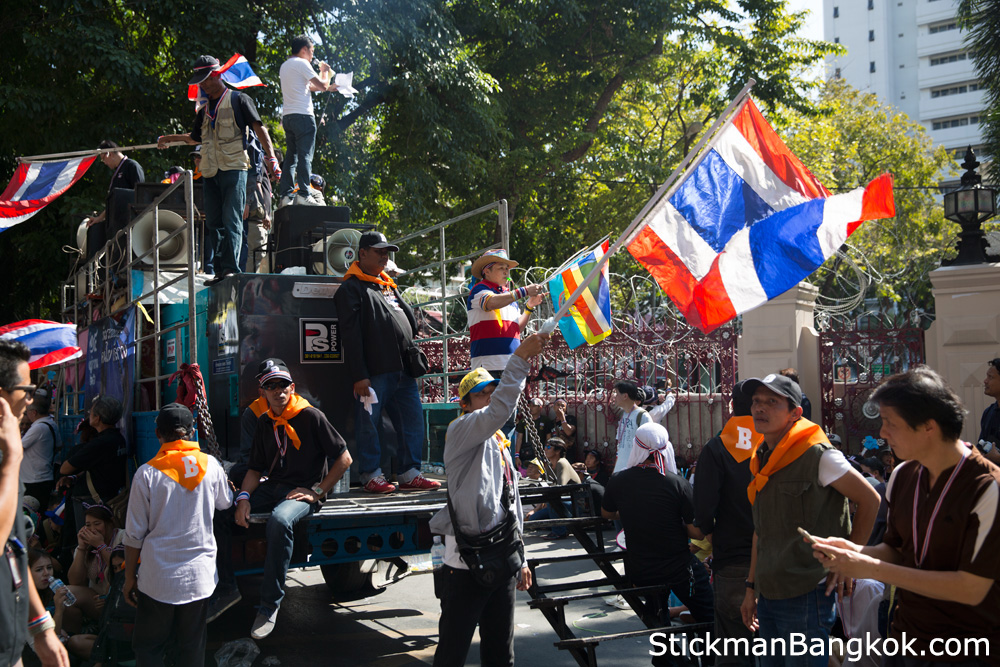 Out front of the main entranceway in to the national Police HQ was a truck with leaders speaking about the protests. One particularly skilled orator taunted the police who were lined up inside in riot gear, wearing helmets, carrying shields and standing in the sun. He told them to strip off their uniform and to come outside where they could join the ranks of the protesters. He said the protesters had water, food and were comfortable. 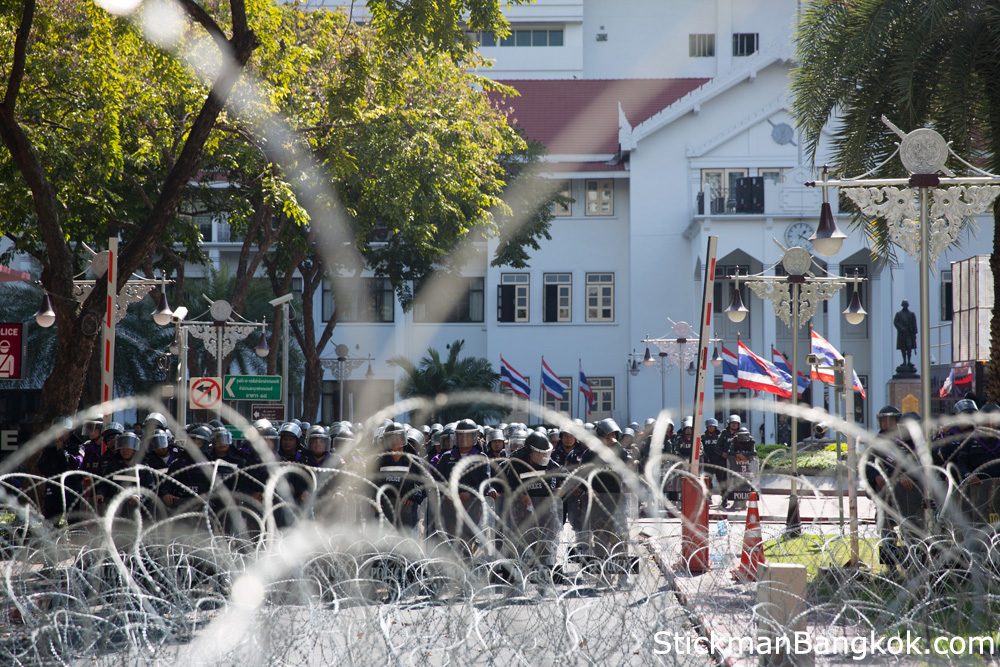 Looking through the heavily fortified gates of the national police HQ were heaps of coppers. 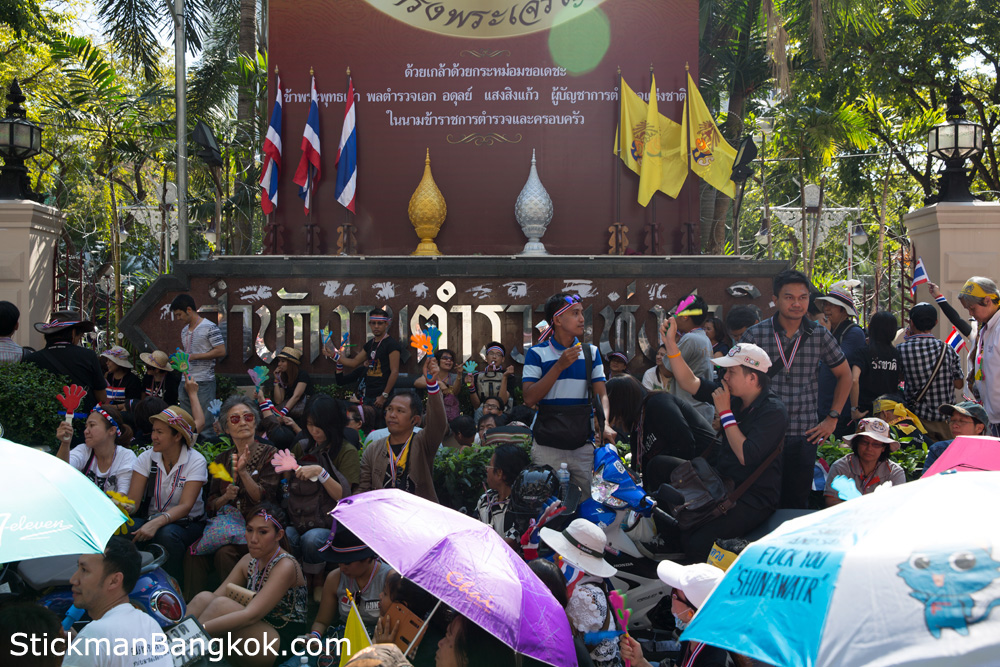 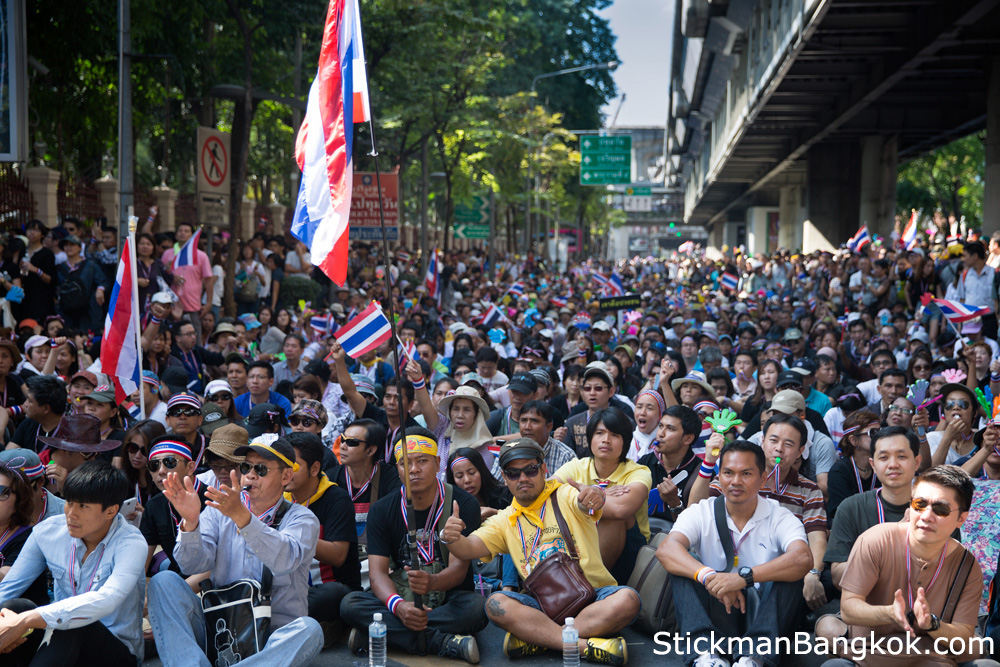 At one point one of the speakers said that it didn’t matter if you came with people you know, or came alone – everyone was in this together like one big family, a small speech which got a most rousing reception, whistles being blown and screams so loud that made ears ringing. 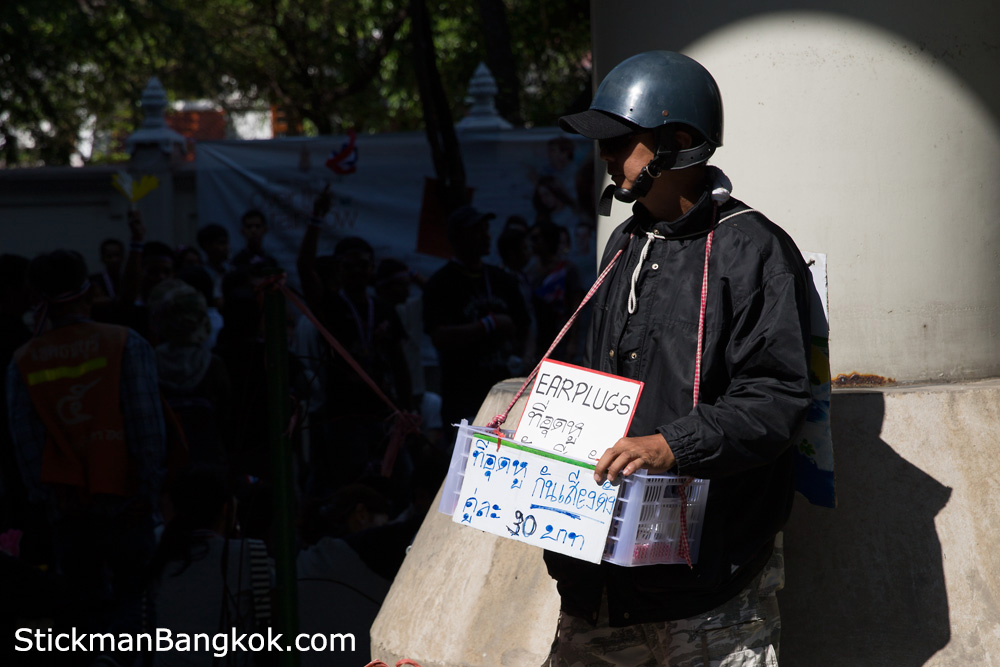 The odd vendor was selling earplugs while others walked around distributing cotton bugs to plug one’s ears for free. 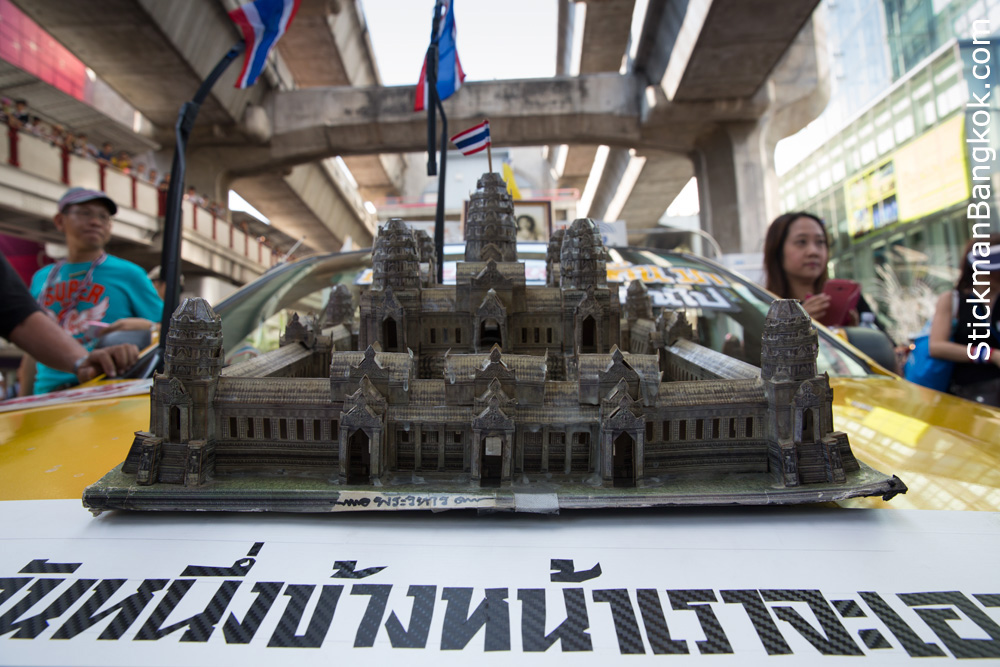 Some took the chance to air their grievances about the dispute of who controls the land around the Pra Wiharn temple at the border with Cambodia. 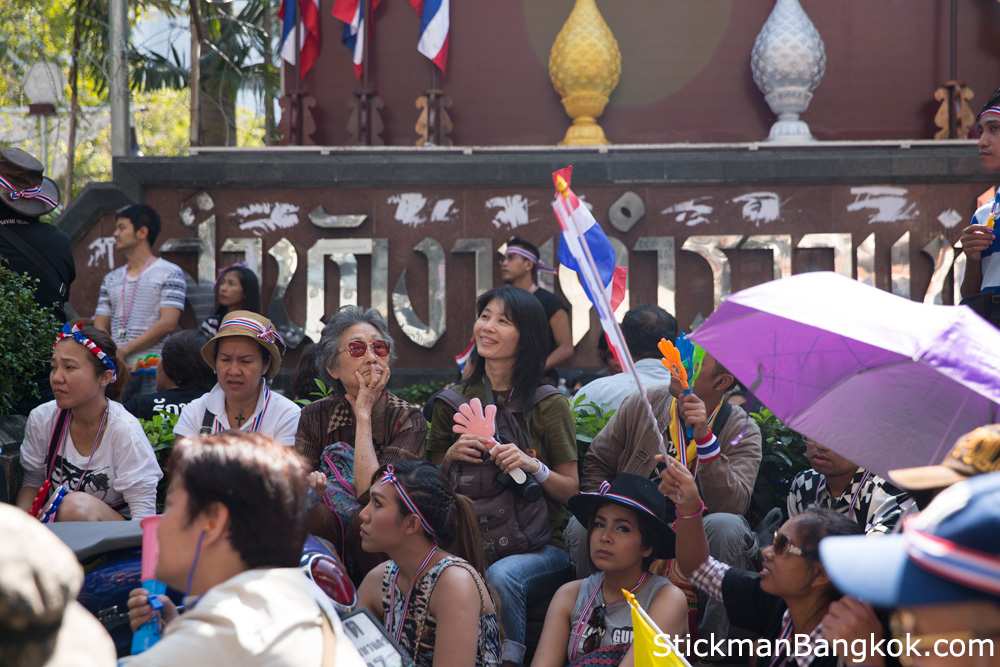 Much of the speeches were about corruption and what had happened to the money paid by people as taxes. 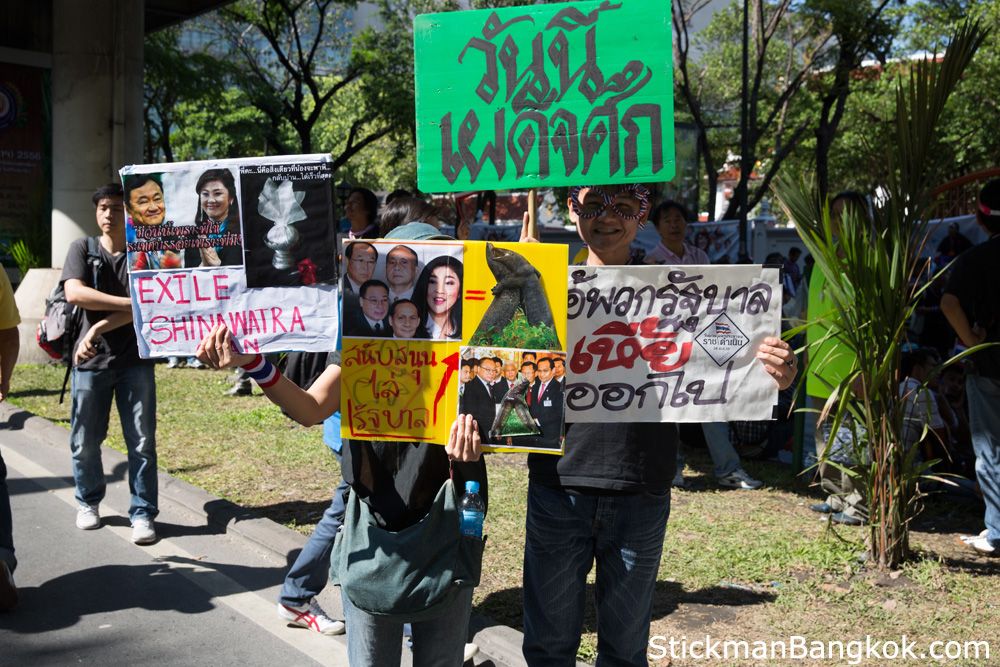 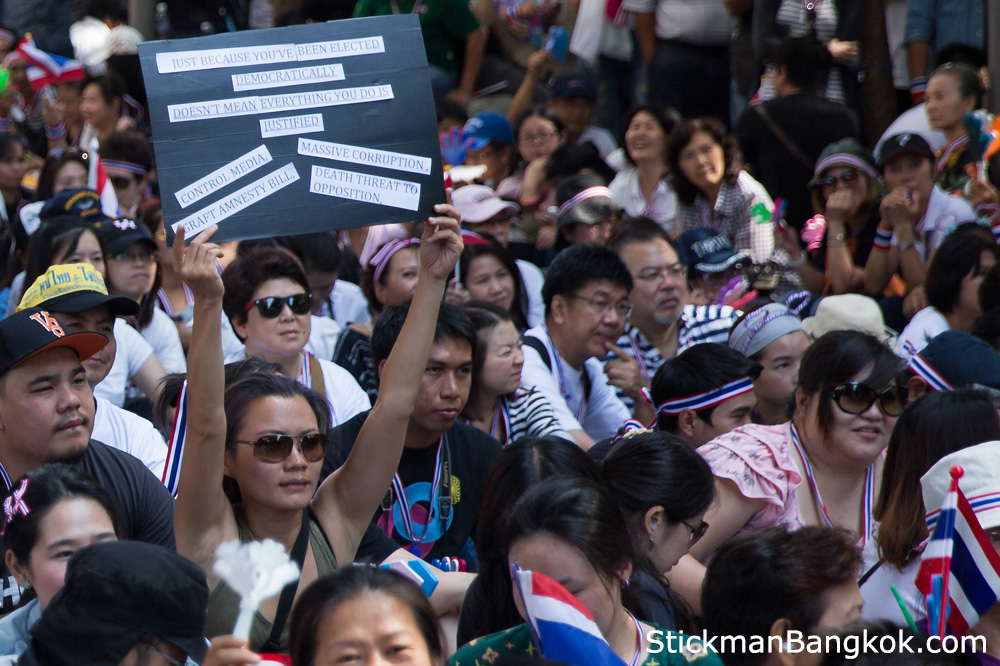 There weren’t that many placards but those that were displayed were strong. Plenty included messages in English. 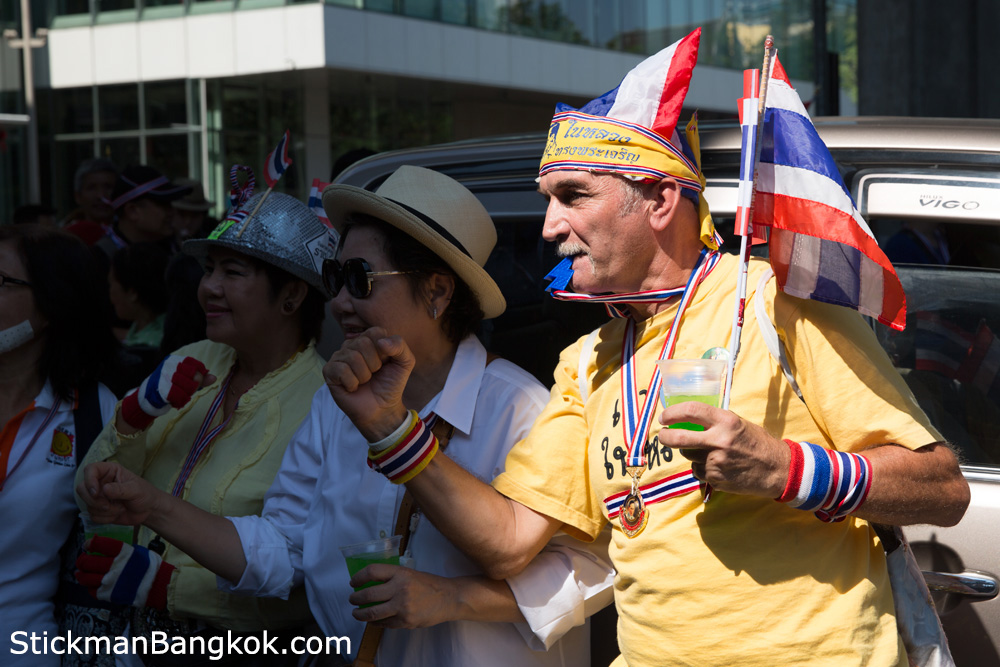 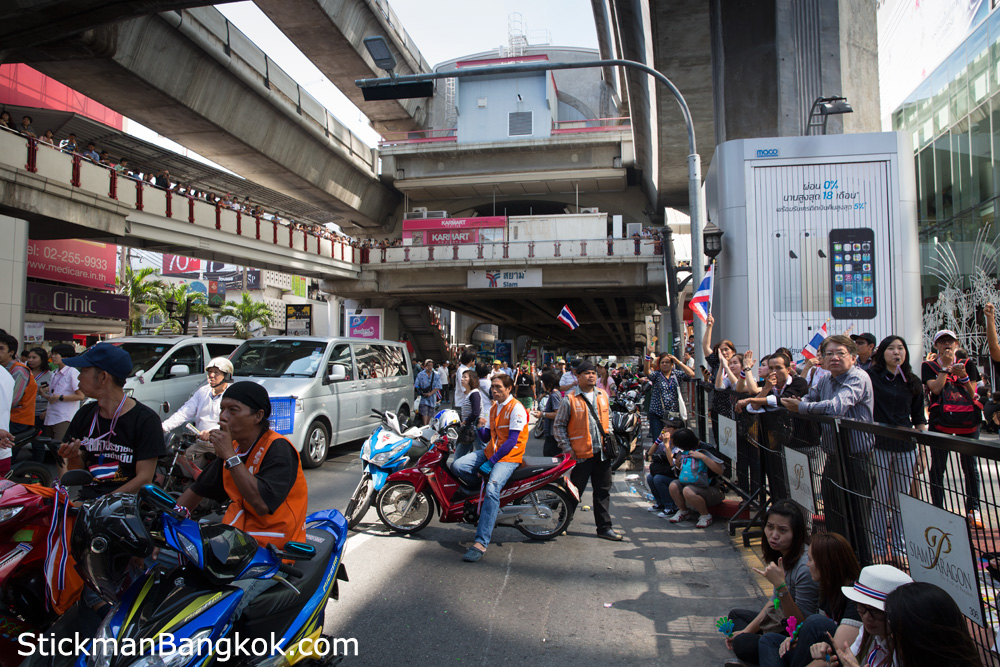 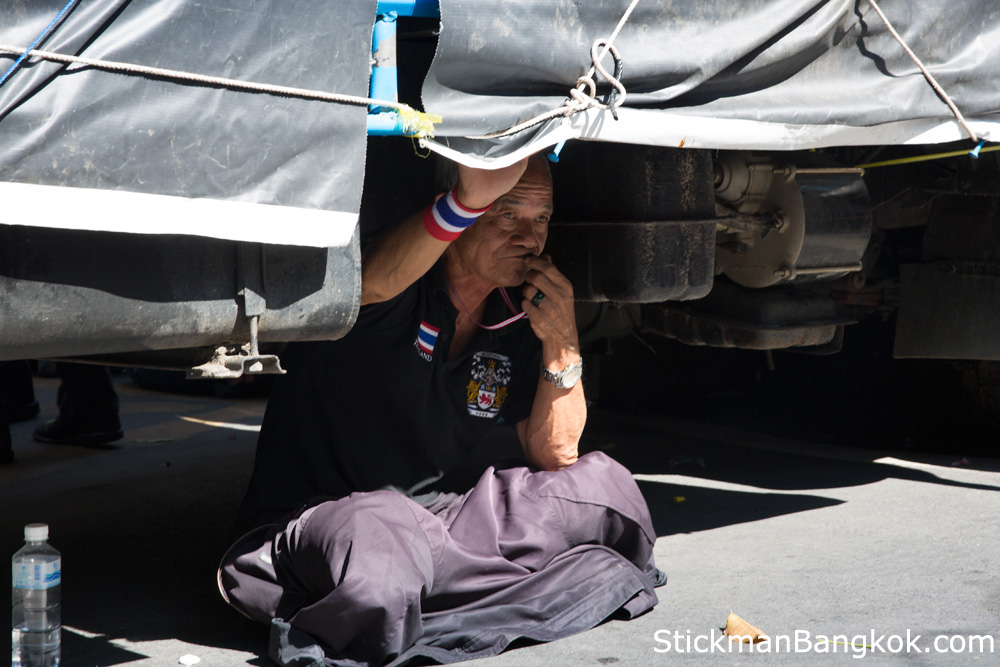 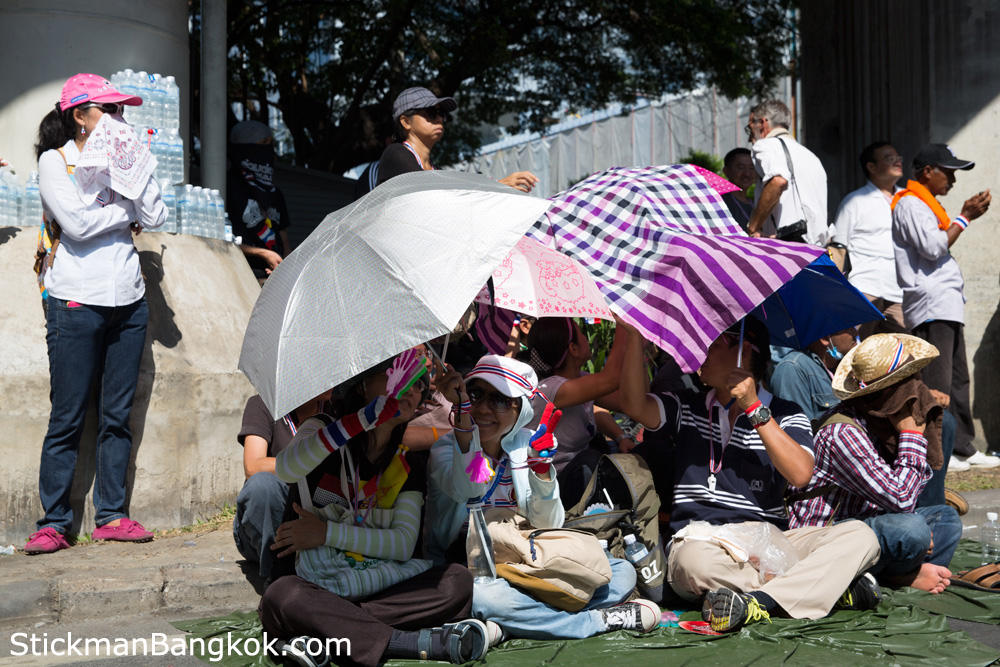 I’ll save the comparison between the reds and the current anti-government protesters for another day. Please do understand however that I cannot get political. I will simply relay what I observe and provide practical on the ground information about what is happening. As a foreigner it is imprudent to comment on the politics. I have my personal views which I discuss with close friends, but that’s it. 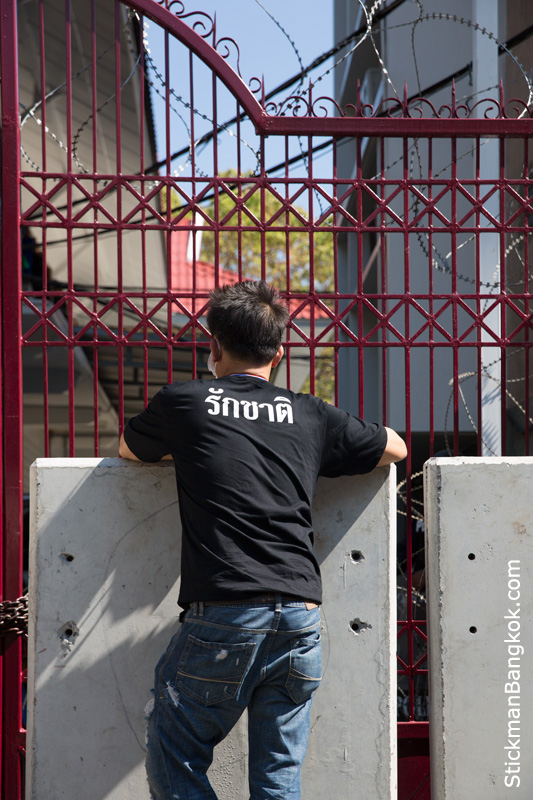 The words on the t-shirt say it all, I love the nation.

Siam Square – in fact the entire area from Mahboonkrong (MBK) all the way to Central World – should be avoided at this time as it is full of protesters and police.

It is unknown how long this will last and when it will return to business as usual in the area. If you are in town for shopping, at the time of writing Central Chidlom, Terminal 21 and Emporium remain open and it's business as usual. Most suburban shopping malls will be open although of course they are not where tourists tend to go.

The Ramkhamhaeng area should be avoided.

Is It Safe To Visit Bangkok?