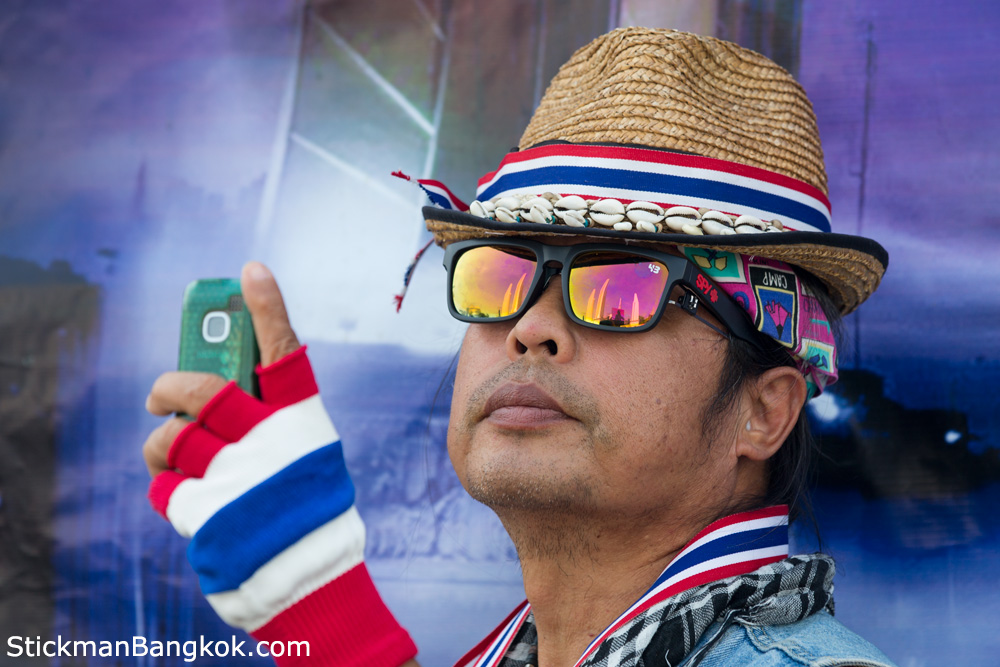 World famous English photographer Andrew McNeill and I went to Democracy Monument today to see what was going on, take some photos and to see for ourselves generally where things were at. We never expected to be there right when victory was announced. 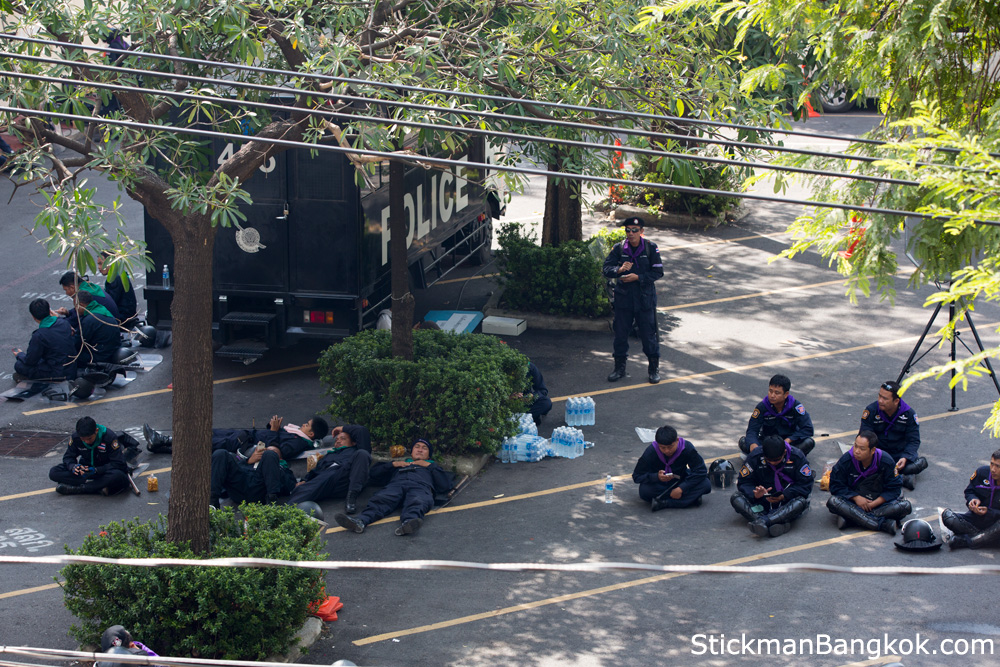 A quick stop at Rama 1 Road at the National Police HQ revealed little change. The compound was full of riot police, many lounging around, some sprawled out getting some much-needed rest. There was no sign of any protesters at all, no threat to their fortress. The temperature in Bangkok these past couple of days has been cooler than it has been, the mercury sitting in the mid to high 20s – mild by Bangkok standards. In the shade it really was quite pleasant. 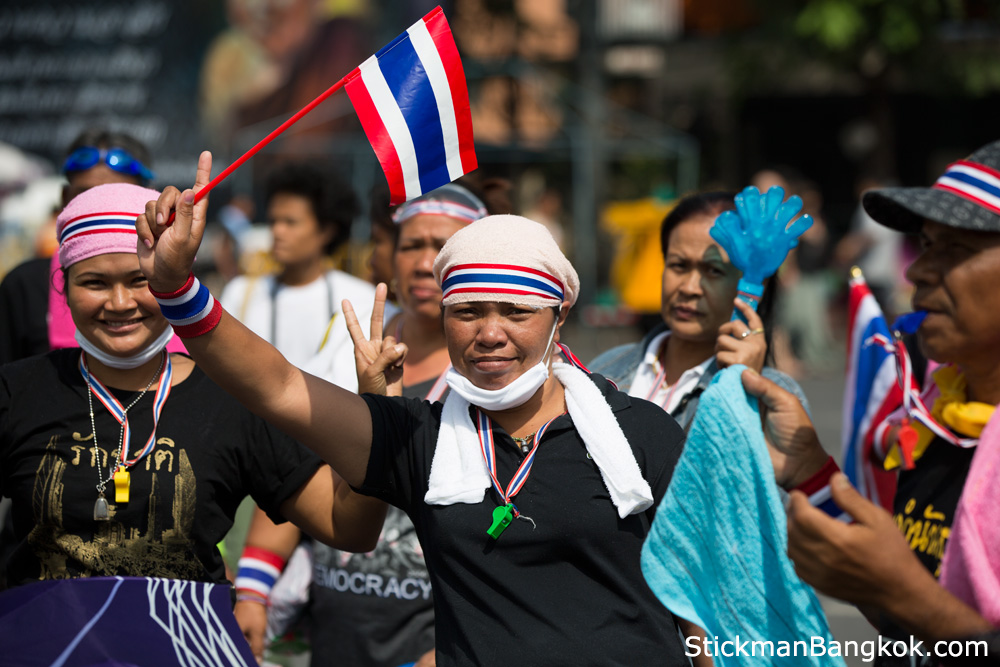 At Democracy Monument it was obvious that the number of permanent residents had increased. More infrastructure had been put in place with more tents, more facilities – kitchens and mobile toilets – more tents and zillion of bottles of water piled up everywhere for protesters to help themselves to. 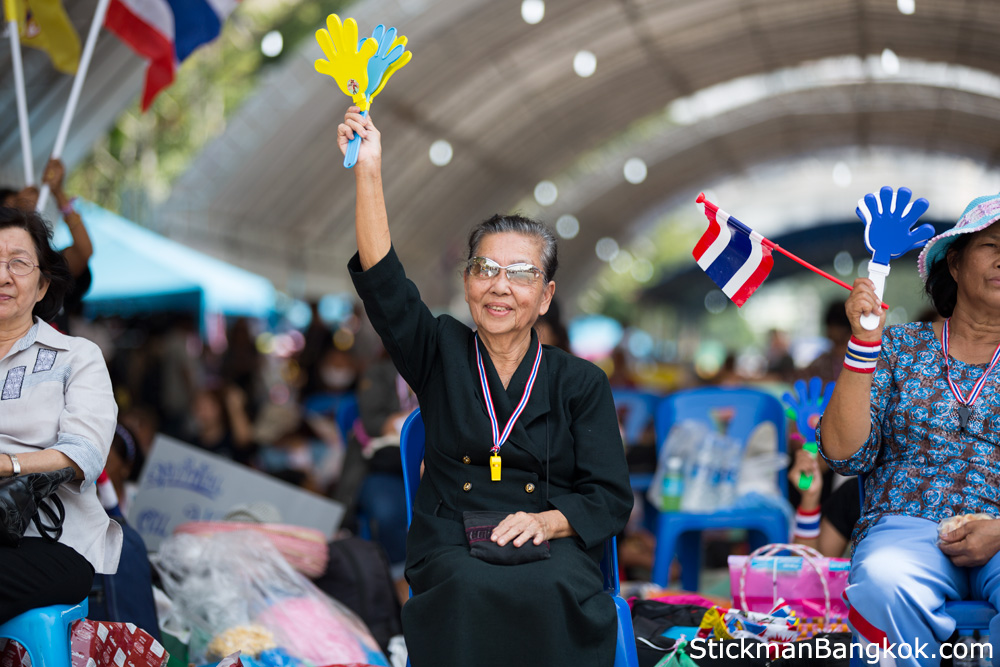 Standing out in the sun at 11:08 AM, one of the announcers said they had an important announcement to make. They prefaced it with the words, big news. 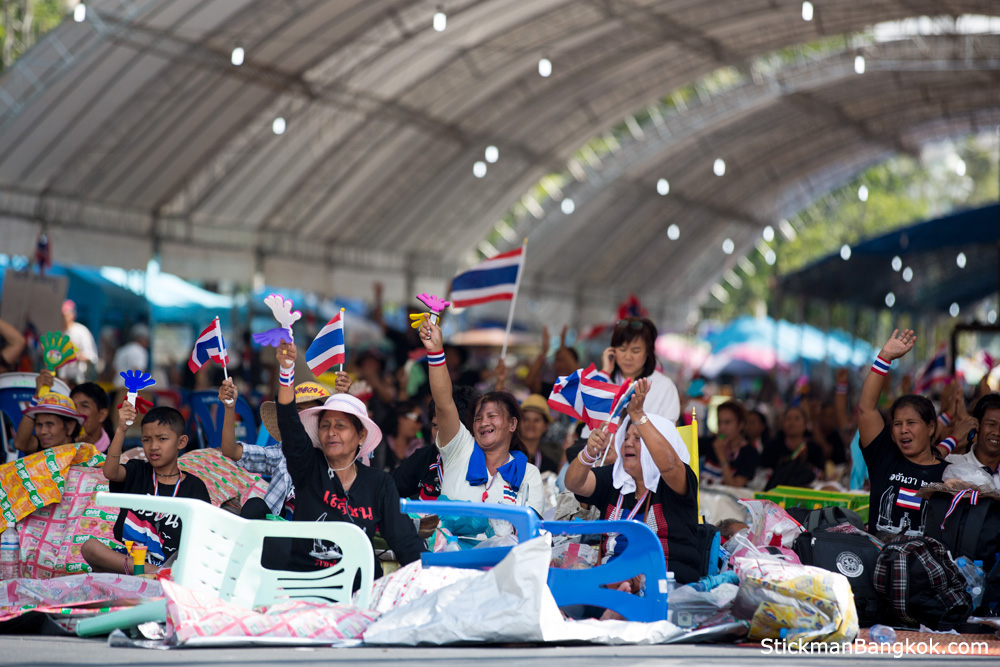 At 11:09 AM they announced that they had won! It took a moment to process and it took a moment for me to realise that the large crowd was also processing what had just been said. What did, “We have won” mean? “The country belongs to the people again. We have won! This is our moment.” 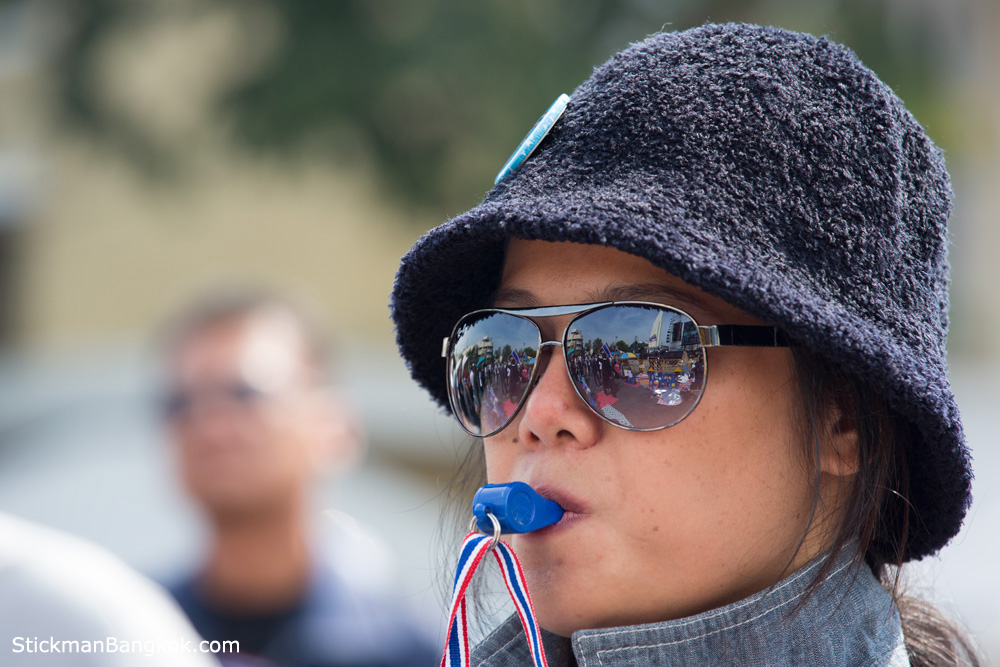 The fellow on stage went on to say that the police had laid down their arms and the protesters had effectively taken the Metropolitan Police Bureau and Government House. I was not the only one trying to process what this meant – there was a delayed reaction from the crowd. 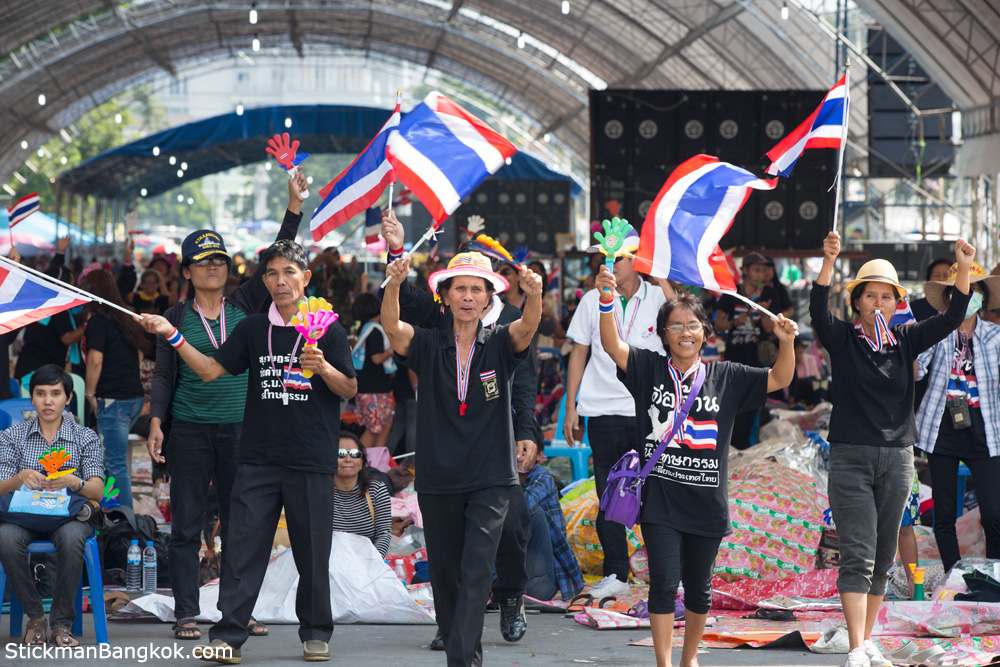 It was the old ladies who seemed to register first. They stood up, arms outstretched, flags waving and they started half-walking, half-running towards the stage on the monument, not looking where they were going. This was their moment! Cheering followed along with a mass movement from under the tents and the shade of the marquee tents out in to the sun and to the main stage at the centre of the protests. 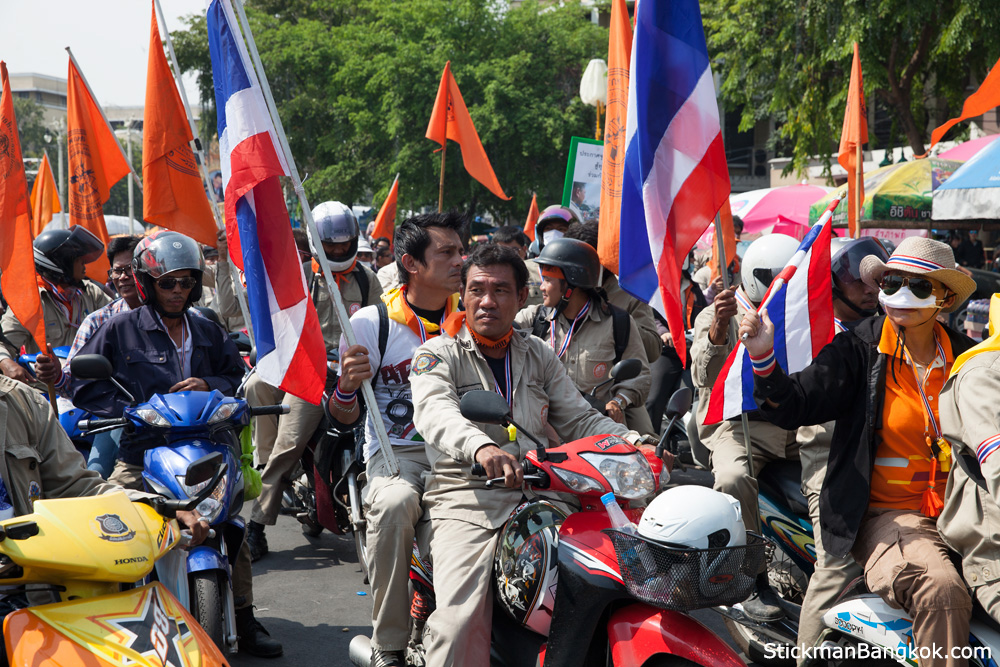 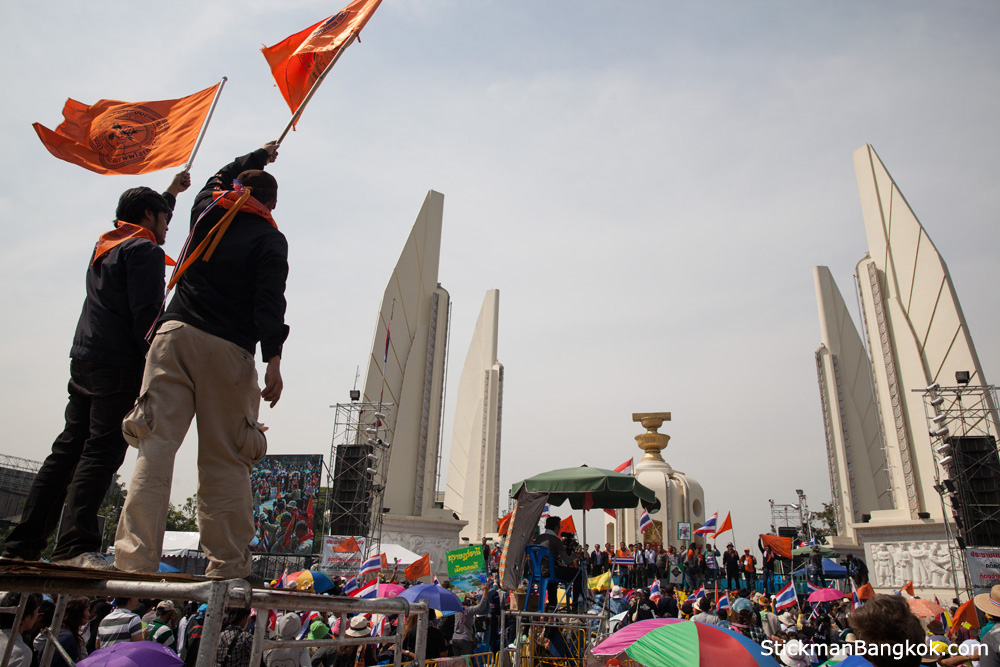 The lanes around the monument which had been empty as protesters took cover from the sun became packed as thousands of protesters moved towards the stage. 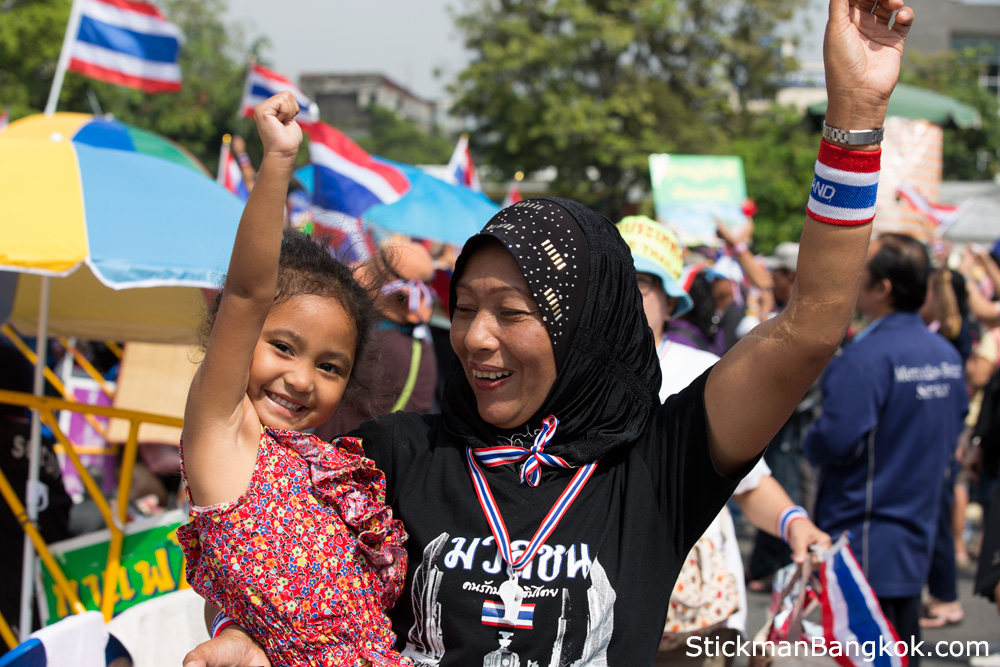 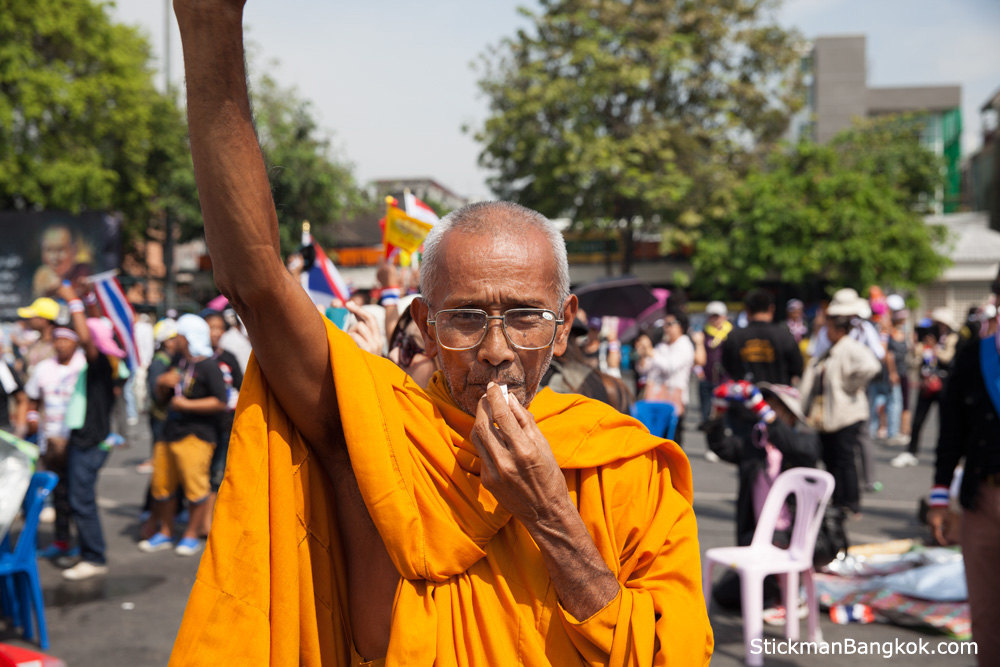 There was jubilation from the crowd, including some not known for showing their emotions. 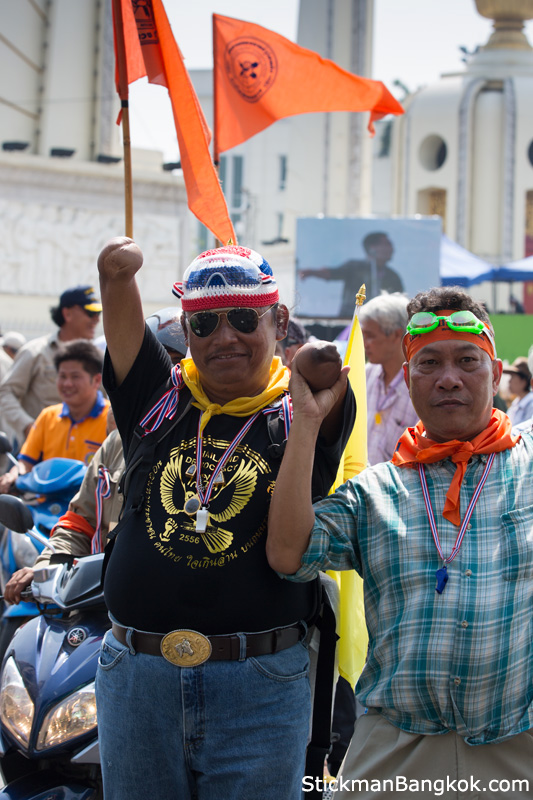 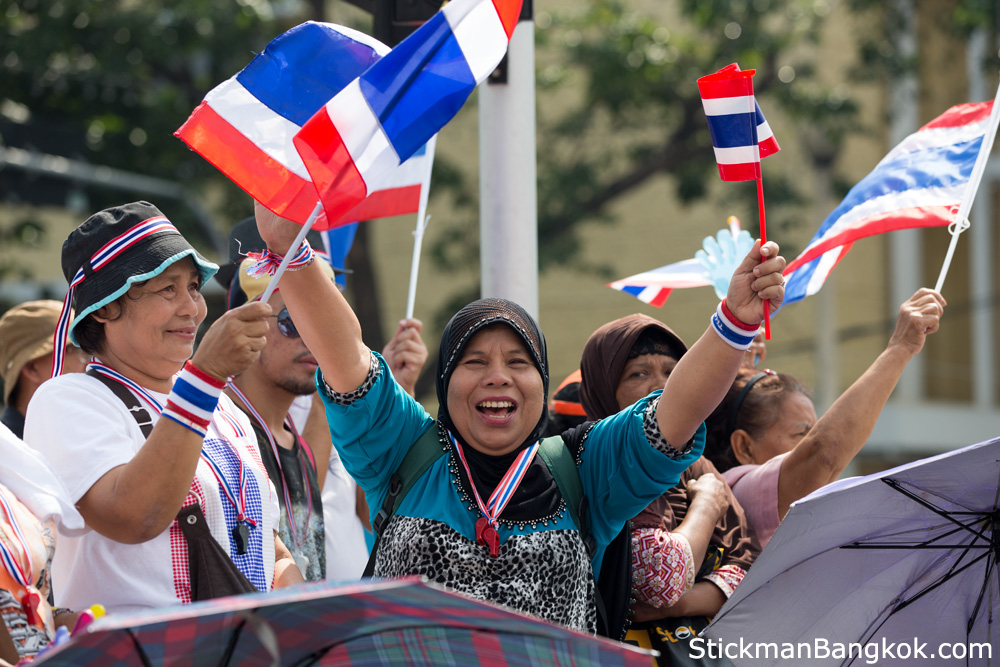 What followed was some of the strongest emotions I have seen in Thailand, many of the older women with tears streaming down their face. Various leaders spoke about what this meant, about how the country had returned to the people. 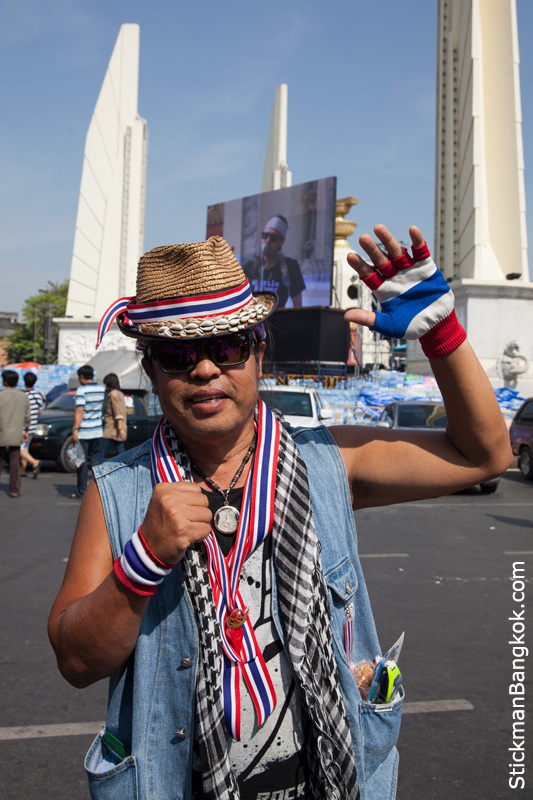 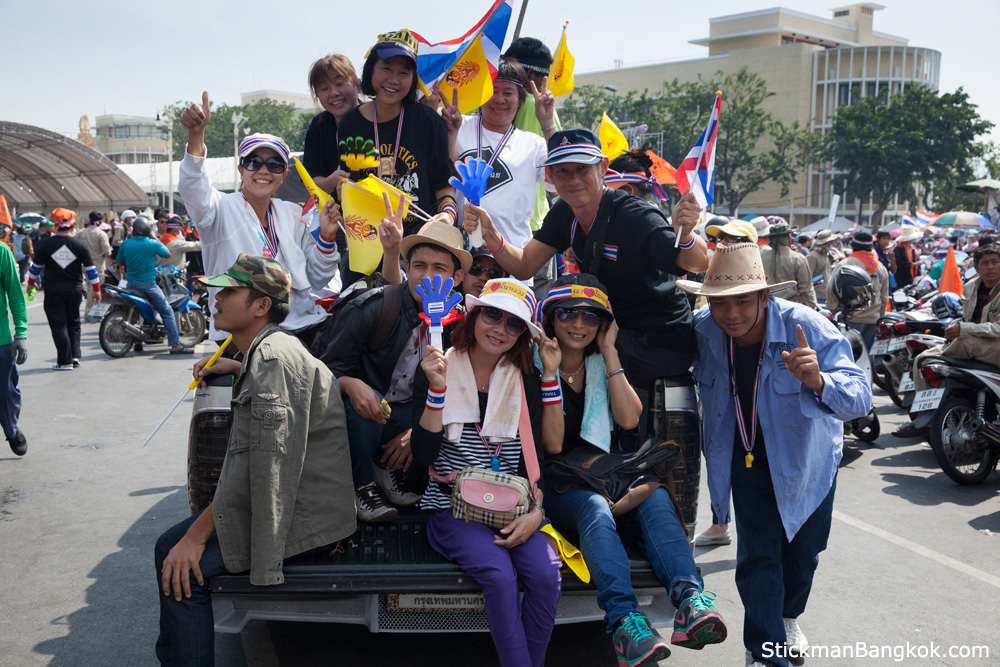 Thai people nationwide were encouraged to go outdoors and celebrate. 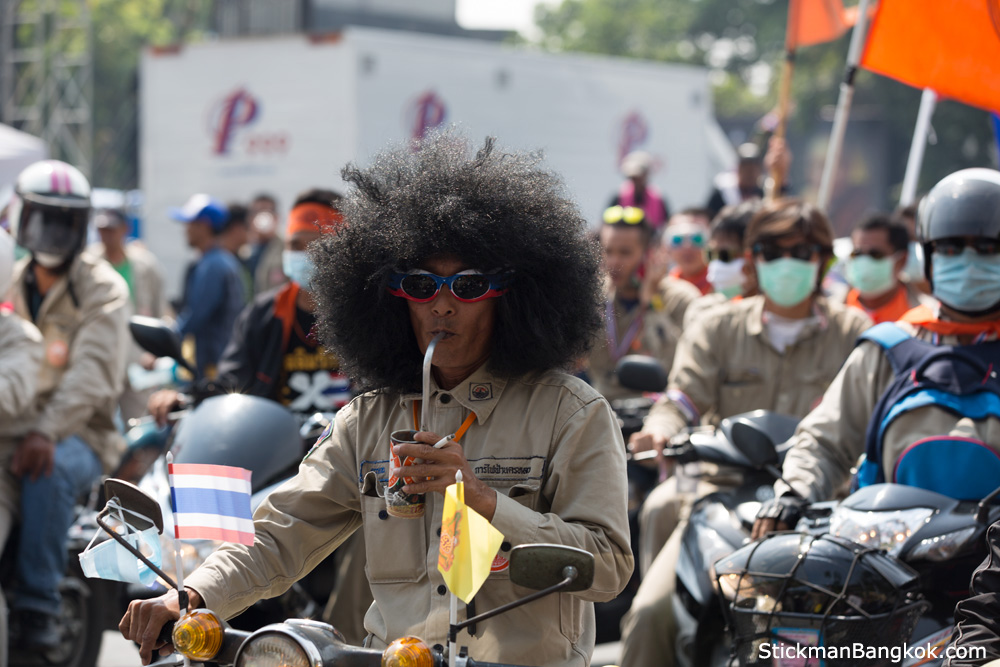 All this time I was trying to work out just what this all meant. Details of exactly what had taken place were sketchy. As thousands of whistles screeched all around me, and flags were waved in patriotic joy, old ladies cried and men cheered. I had understood every single word of the announcement, caught every nuance, yet I tried to rationalise just what victory meant…and I couldn't. The government had not been toppled. It had not been overthrown. As I saw it, the battle to get into Government House and the Metro Police HQ had been won, yet the crowd was cheering like Thailand had just been crowned the world champions of football. Feeling like the only two white faces in a sea of thousands, some Thais even came up to his, shook our hands and said that word, "Champions"! Perplexing and confusing doesn't even start to describe how I felt, but then politics in Thailand has always been complicated. 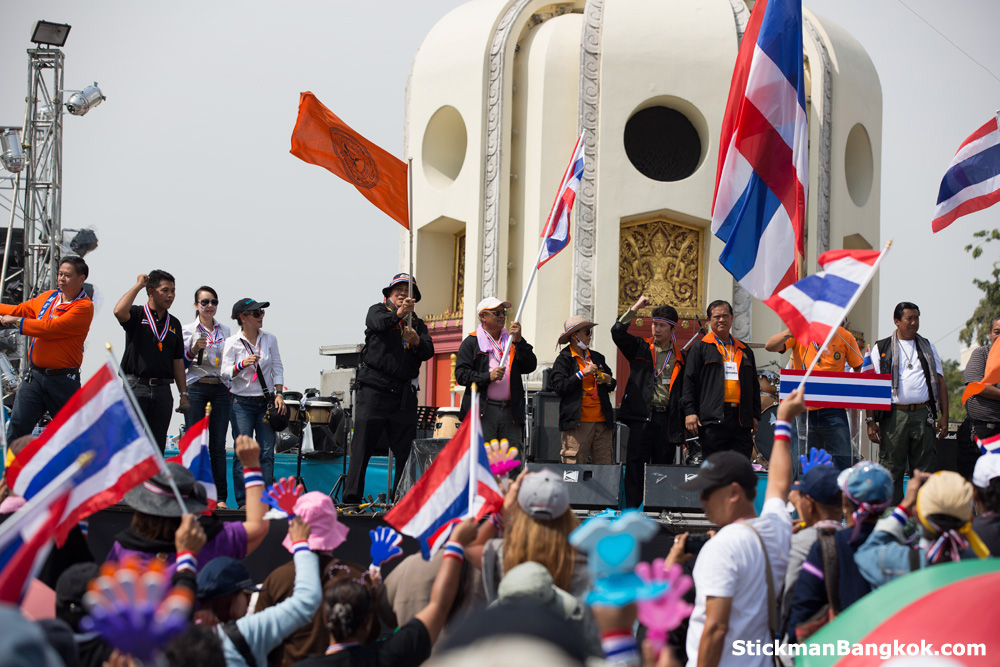 A kilometre plus away, protesters would pile in to the Government House grounds, thousands of protesters joyously waving flags, dancing, all smiling, everyone absolutely delighted. But they wouldn’t stay long and they would soon leave the grounds. A statement had been made. By the time I got there from Democracy Monument perhaps an hour and a half later – it’s about a 20-minute walk or so but I stuck around Democracy Monument to take more shots and, well, to enjoy the moment, being there amongst thousands of elated Thais – those who had entered the Government House grounds had left. 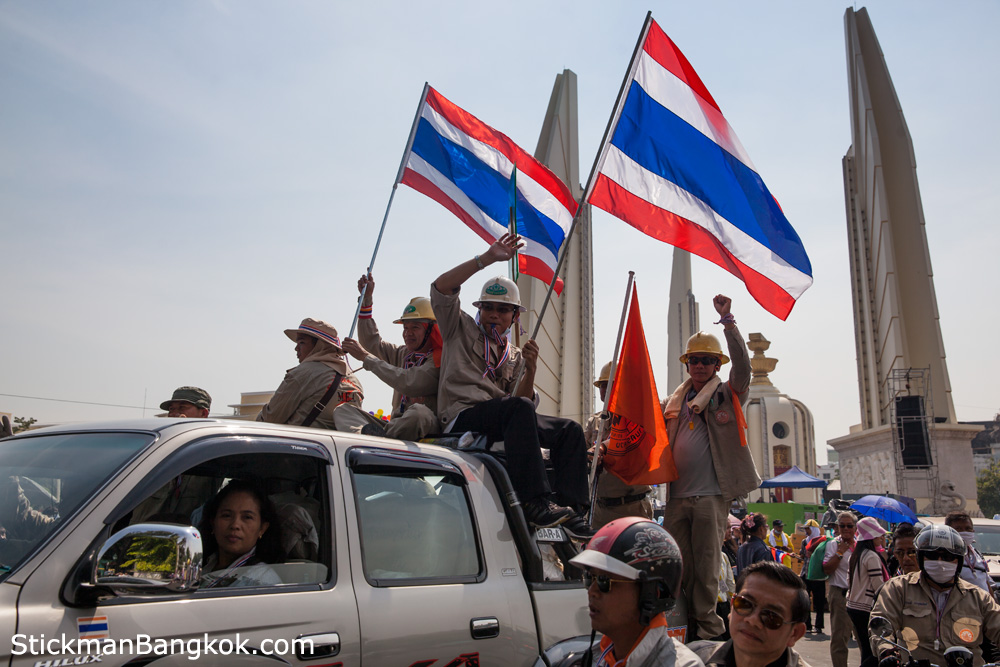 Nationalistic fervour came to the fore as t-shirts appeared from nowhere for sale with slogans of love of the nation. 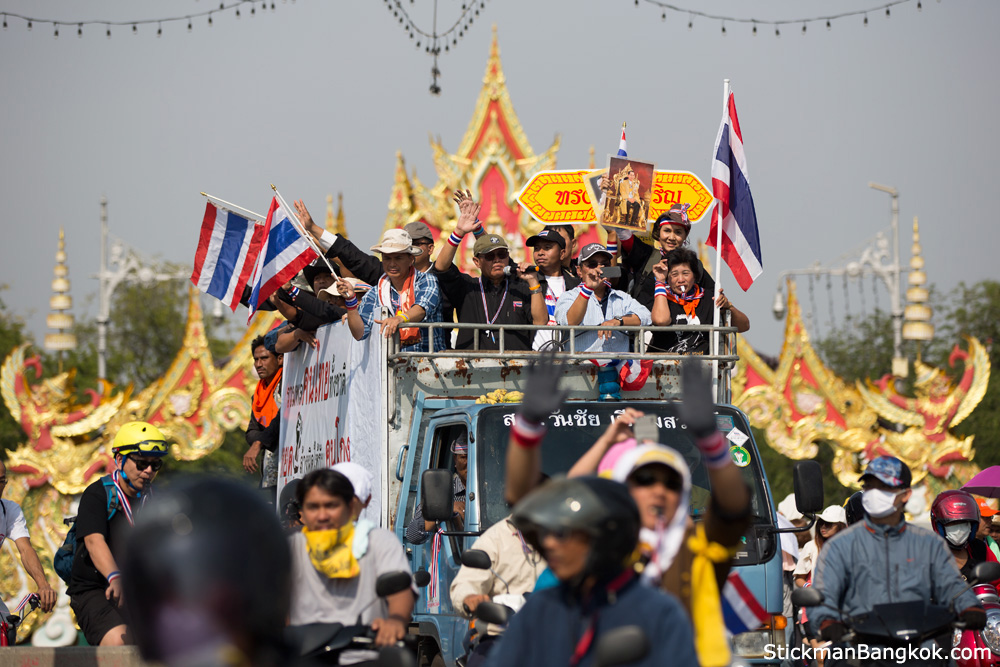 A victory parade took place with vehicles of all shapes and sizes, from trucks overloaded to luxury cars with passengers hanging out the sunroof. Everyone was celebrating in full voice. 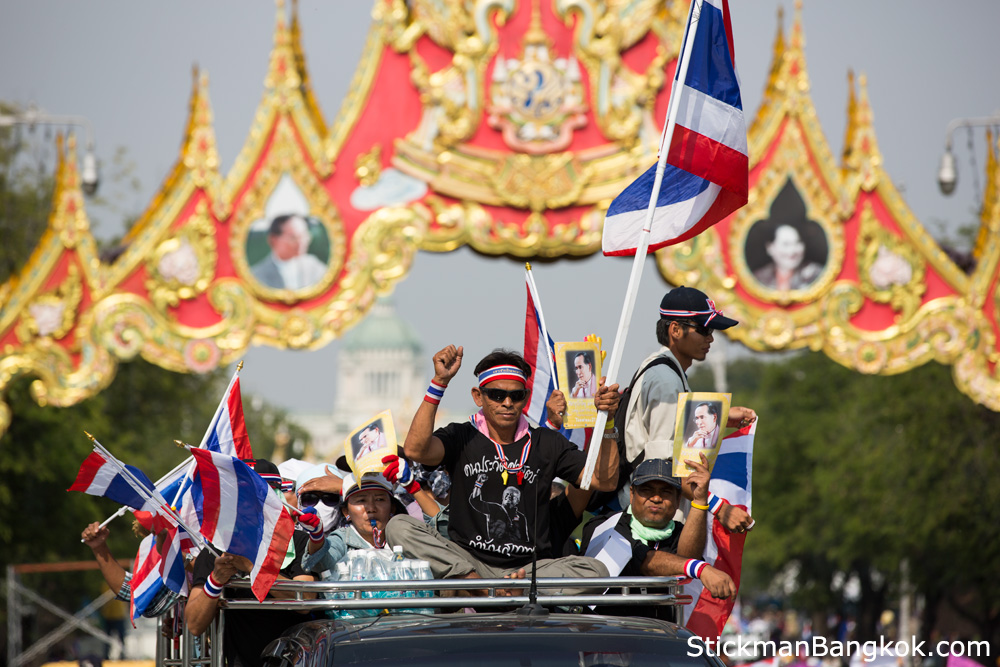 Wherever you looked and on every vehicle, there was someone was holding a photo of His Majesty The King aloft. 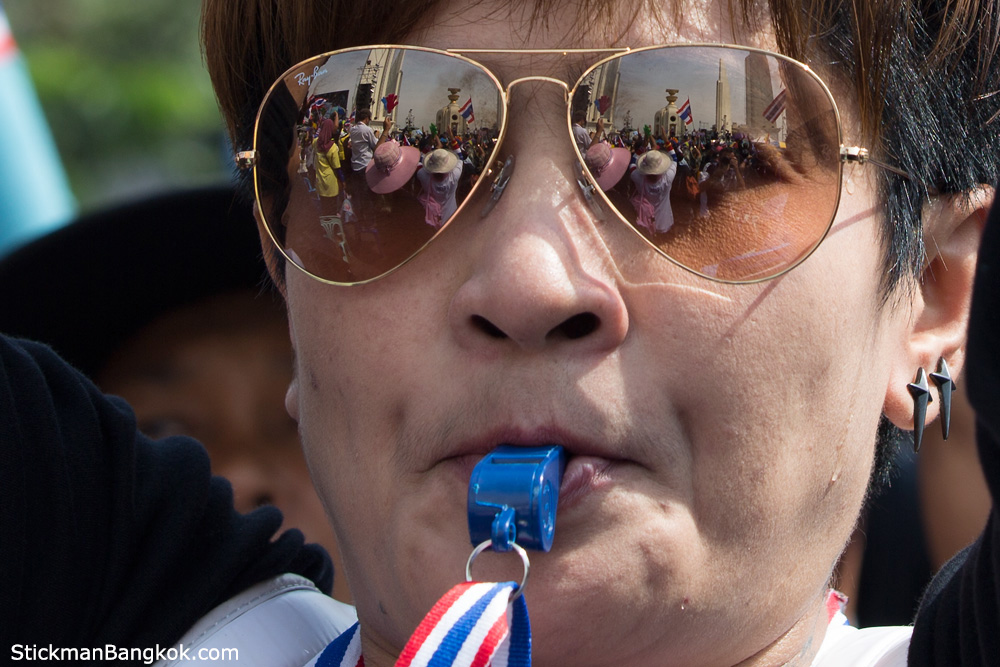 Various announcements were made. The area would undergo a major cleanup. With thousands of people living under huge marquee tents, and with hundreds of smaller tents set up along with the kitchens, temporary toilet facilities and what not, the area had become rather a mess. 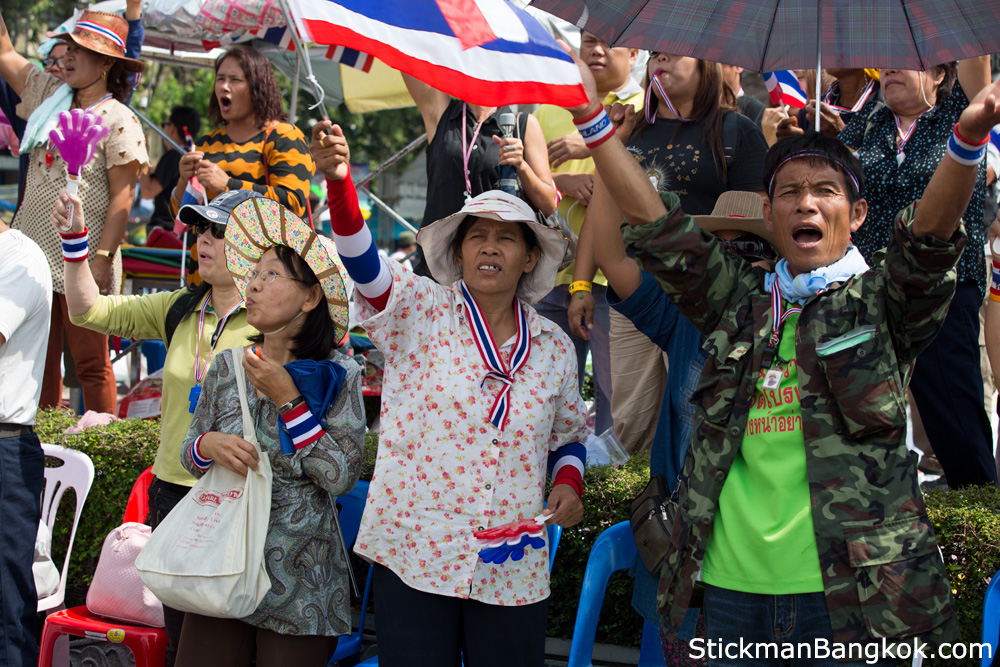 The celebrations were emotive with the crowd in full voice. Soon favourite songs that evoke national pride were playing, the crowd singing along. I reflected on the victory. The government remained. The Prime Minister remained. The main protest leader has an arrest warrant in his name with talk of charges of rebellion and even treason. The Metropolitan Police Bureau may have opened the doors to their compound – which the protesters then chose not to enter – but what happens next? 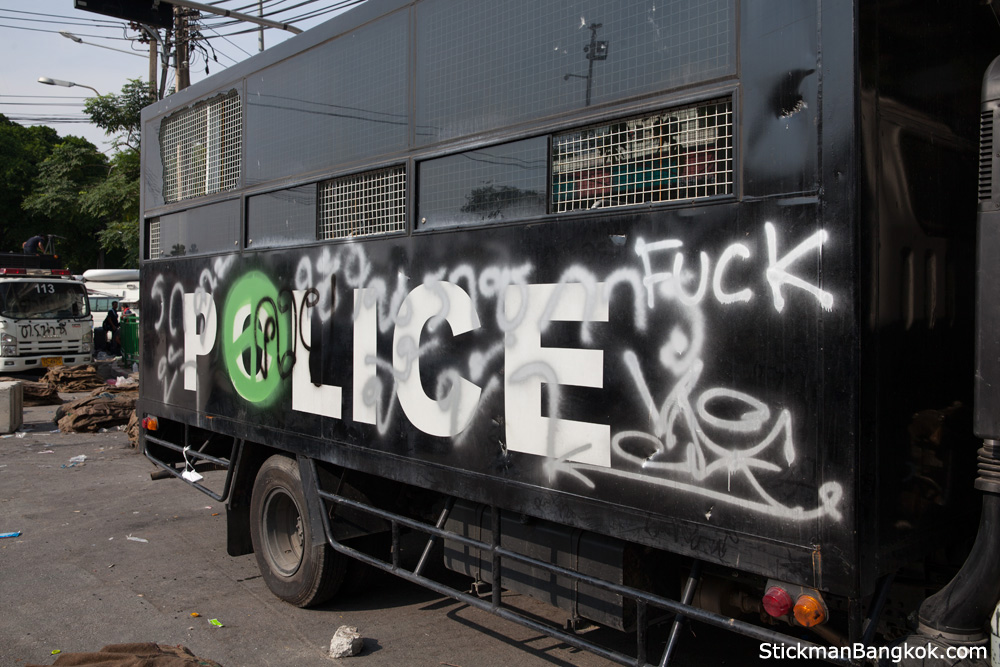 The political side of things is not why I put these updates together, but rather to provide on the ground observations and to convey what is happening. I decided not to think too much more about it. 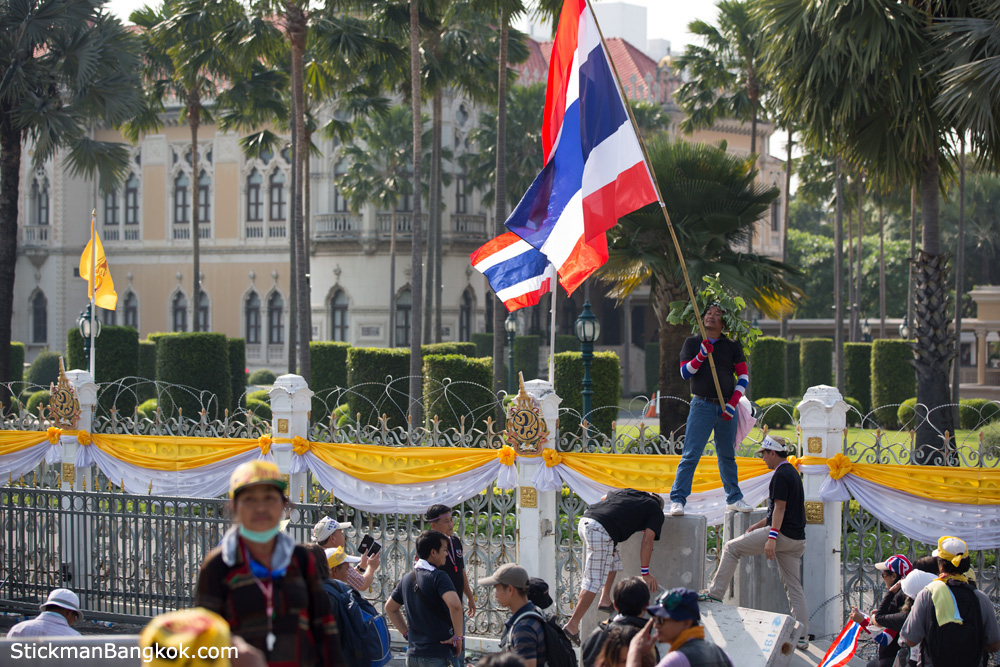 The sometimes violent skirmishes that took place over the past few days have ended. Whether things will flare up again, who knows – but it does seem that commonsense prevailed when it became obvious that the protesters would eventually break their way in. In what I presume was an effort to contain property damage and injury or loss of life, the gates were opened. 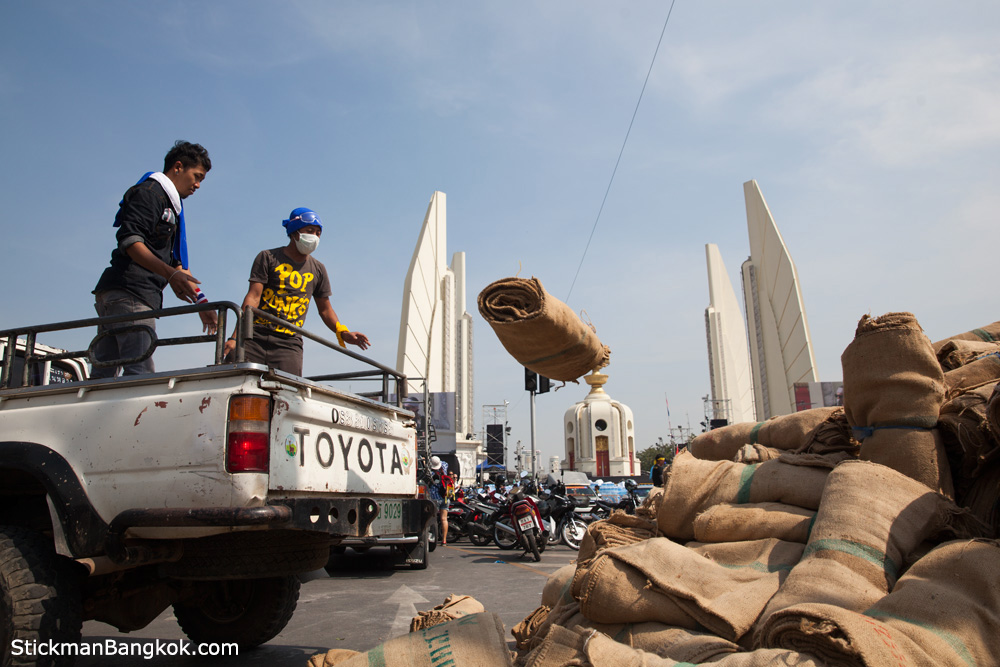 More supplies were brought in, unloaded from the backs of pickup trucks and larger vehicles. Huge piles of bottles of water were strewn everywhere. Staff at food stations invited the few foreigners wandering around to dine with the protesters. Sacks were brought in, my best guess that they would be used as makeshift bedding for the thousands in residence, those who have no intention of going home until they have seen things through to the end. 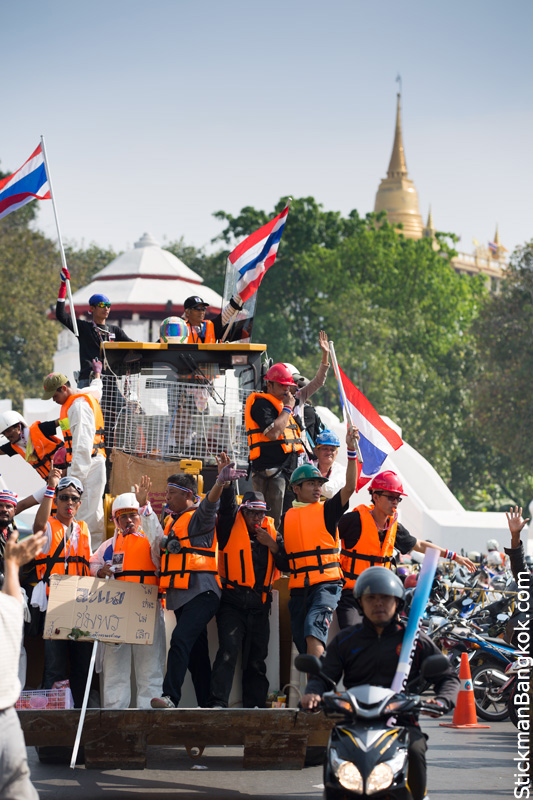 I imagine Khao San Road and parts of the old city will remain difficult to get to. Presumably the protesters are going to remain in residence until their end game is reached, or otherwise. The other areas popular with foreigners like Sukhumvit and Silom remain – as they always were – absolutely free of protesters. Visitors to Bangkok can be cautiously confident that things are, for the time being at least, settled and from now until King’s Birthday – and hopefully beyond – the likelihood of flare-ups appears to have greatly reduced.

A Lull in the Storm