It’s several months since I have written a weekly column so I guess it’s as good a time as any to write a brief update about what I am up to and where things are at with the Stickman site.

I continue to follow what is happening in Thailand, browsing the Bangkok Post daily, stopping by ThaiVisa occasionally and remain in regular contact with friends in Thailand.  I still respond to emails from readers and post the odd story to the readers’ submissions section of the site.  I have not, however, written a column since August of last year as when I do visit Bangkok I tend not to frequent those neighbourhoods I used to write so much about.

Here in New Zealand all is well and I continue to enjoy the Kiwi lifestyle.  I have no regrets about leaving Bangkok.  That’s not to say that I don’t miss the place – I do; I miss many old haunts and friends – but overall I am happy here in New Zealand and have no plans to relocate back to Thailand.

There are times when I think about writing a column and have even entertained the idea of resuming it.  It would be more about what’s on my mind at the time with just a little bit of what’s going on in Thailand.  If I do write anything, I will publish on a Sunday – so if you do wish to tune in to see if I have published anything, drop by the site on Sunday around 6:00 PM, Thailand time.  If there’s nothing there then you don’t need to check again until the following week.

On another note, Smooci is continuing to grow and has become the largest escort site in Bangkok, with additional launches in Manila, Singapore, and Hong Kong, and Pattaya expected soon.

Now with all of that said, this week I do have a bit of news from a recent trip and have decided to write about it.  I dropped by Nana Plaza when I was in Bangkok last week and bumped in to one of the lords of the plaza.  We enjoyed a couple of drinks and he told me about the ongoing plans to transform Nana Plaza.

It’s not easy running Nana Plaza, he told me.  While the bars themselves face issues like the never-ending crackdowns on bar closing times and what is ok inside the bars and what is not, the owners of the complex itself have had a relatively easy ride.  Closing time crackdowns don’t have any effect on the owners of the plaza, nor do rules related to showing or barfines or bar licences or any of the stuff that is such a headache for your average bar boss.  The owners of Nana Plaza are, after all, landlords whose business model is leasing space to people who run bars.

Not that long ago the owners of Nana Plaza were called to a meeting where they were told they had to make some changes.

It would seem that someone in the authorities took exception to the way that Nana Plaza presented itself to the world, specifically the  slogan on the main Nana Plaza sign which reads “The World’s Largest Adult Playground”.  Someone (and all it takes is one person in a position of power) felt the slogan could potentially damage Thailand’s reputation.  With the country largely shedding the reputation it once had for sex tourism, they do not want visitors to be reminded of its past.  Subsequently the owners of the plaza received a request that the slogan be changed. 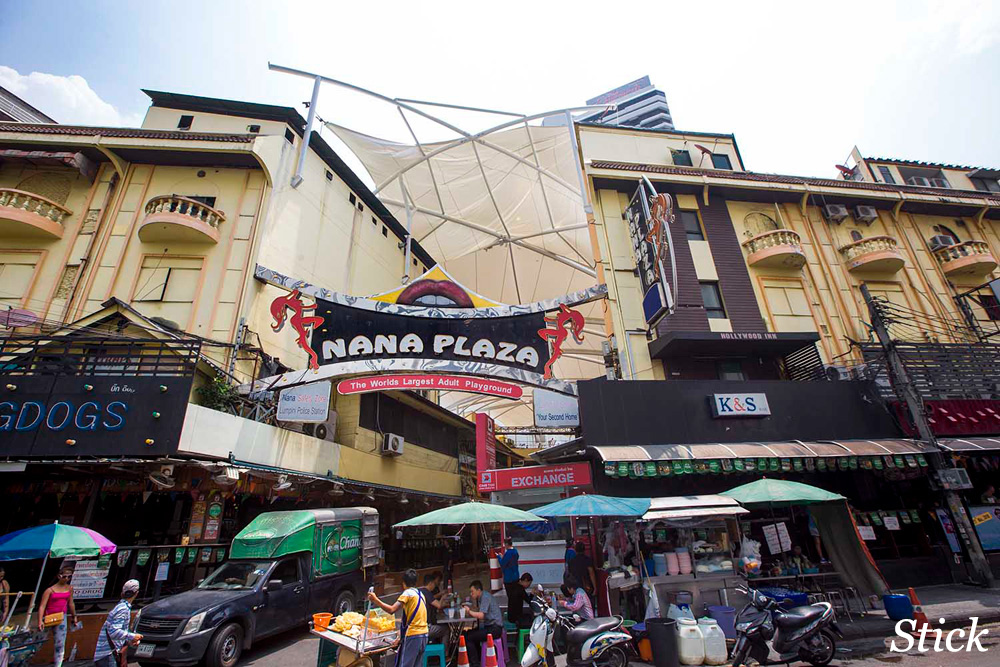 Nana Plaza this week, with the sign and the offending slogan.

This new slogan, it is felt, is a much better fit for the couples and families who increasingly make up most visitors to Thailand.

While no requests were made to change what goes on inside the plaza, the owners were instructed that the entrance had to be closed off so anyone walking past cannot see what is going on inside.  It’s not what happens inside that is a problem, it’s simply that the authorities don’t want people to be able to see it.  The owners of the plaza were told the plaza needs to change the way it operates and be more discreet.  They were told to take a leaf out of Thai venues’ copybook where it is not possible to see what is going on inside.

Many Thais have never understood why the farang nightlife areas are open and that has become an issue.  Change has to happen, the owners of Nana Plaza were told.

But the slogan on the sign and the front of Nana Plaza which allows people outside to see what is happening inside are not the only problem.

Also of great concern is that the nearby Landmark and JW Marriott hotels – both 5-star properties – tower above Nana Plaza and many rooms have a ringside view of what goes on in the plaza.  This view, the owners of Nana Plaza were told, had to be blocked.  The solution wasn’t easy – Nana Plaza would require a roof! 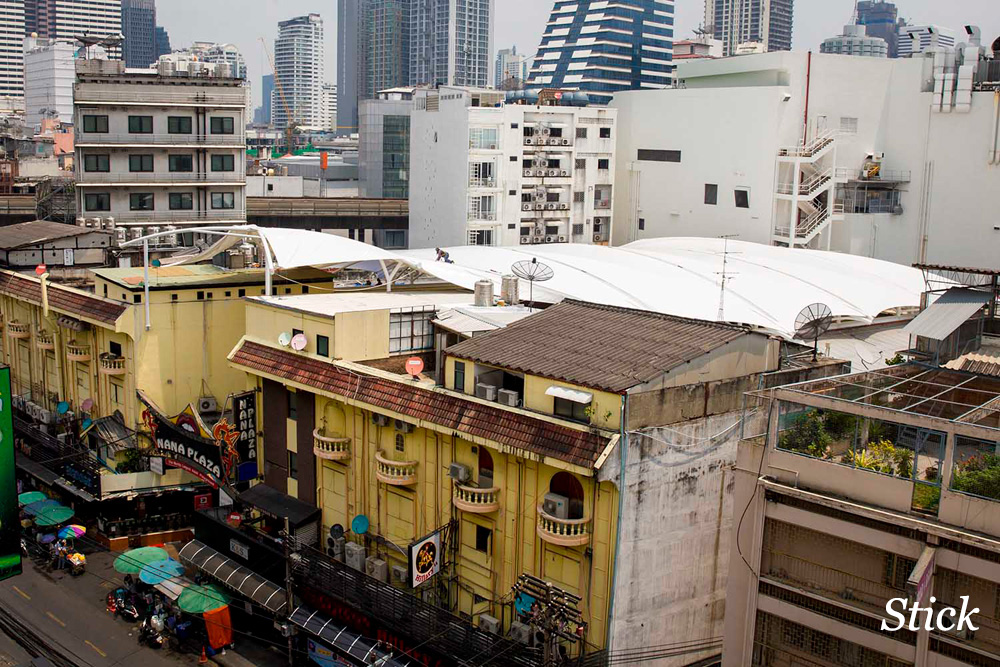 The new roof over Nana Plaza

A design team and engineers were hired.  Their remit was to redesign the plaza in such a way that what happened inside could not be seen from the street front, nor from rooms in any adjacent buildings, be they existing or yet to be built.  As per instructions from the powers that be, it all had to fit in with the idea that Nana Plaza is the world’s safest adult playground.  The authorities like the idea of promoting Nana Plaza as a safe place to visit.

The layout of the plaza meant extensive construction would be required to close the one and only entrance and conceal what takes place inside.  It would be a major issue as bar operators have long-term leases yet any construction may require bars to be dismantled, a new frontage and entranceway built and then – if it is even possible – those dismantled bars rebuilt.  It would be a logistical nightmare with all sorts of legal ramifications – and hugely disruptive to business in the plaza and even the soi in general.

After many meetings, it was decided that instead of undertaking a major reconstruction of the front of the plaza, a simple barrier constructed of sheets of iron would be erected to cover the front and prevent prying eyes outside seeing what was going on inside.  Business would not be disrupted and it was a cheap option.  But it would look like a dog’s breakfast.

That left the roof, and concealing the plaza from prying eyes up high.

Extensive engineering was required for the construction of a roof which has largely been completed.  The new roof blocks the view from neighbouring buildings where unknowing visitors cannot see inside the plaza and are none the wiser that what was once touted as the world’s largest adult playground is but a stone’s throw away.

The roof does exactly what it was designed to do but somehow the project didn’t feel complete.  The roof is an eyesore and was not fitting with the idea of the area being safe.

The operators of the plaza sat down with the designers again, explaining that the roof and the front barrier need to project the idea that Nana Plaza is an adult playground, but at the same time it is safe.

After much discussion between the designers and the engineers, the suggestion was raised that the whole complex be draped with a giant condom!  What better way to convey a safe adult playground?

But how could you cover an entire complex in a condom?  Ideas were brainstormed, manufacturers contacted and a solution was found.  A giant condom could be manufactured from sailcloth, the material used to manufacture sails for yachts.  It would be easy, the manufacturers said.  The sailcloth would not be required to meet the usual stresses of sailing and would be for decorative purposes only.  Can do!  A contract was signed and a manufacturer set about creating a world first – a giant-sized condom made of sailcloth!

The huge condom-shaped sailcloth is made of 9 large pieces of sailcloth joined together, totalling more than 7,000 square metres.  It will be draped from the back of the plaza, across the top and over the front of Nana Plaza in an installation operation that will take place later this week and require a team of 40 to complete.  There are slits in the front through which a new secure entrance to Nana Plaza is being built featuring a large vestibule where the guards will be posted, providing improved security.  In some ways, getting in and out of Nana Plaza will be like passing through curtains when entering and exiting the auditorium in an old-style theatre.

The main entrance will see a smallish building built and work was to start a few days ago, just before I left Bangkok.  The installation of the giant-sized, condom-shaped sailcloth will take place later this week with Thursday penciled in.  The lords of Nana want everything completed before the weekend.  While Nana Plaza will continue to be known as Nana Plaza, one does wonder what nicknames the giant new condom over the complex might attract.  One also wonders if the giant condom will become a tourist attraction in its own right in the same way that Soi Cowboy and all its beautiful neon has become.  The giant condom could have the opposite effect of what was intended and it might actually become a draw for crowds of mainstream visitors to Nana Plaza who wish to see and take a selfie with the world’s largest condom! 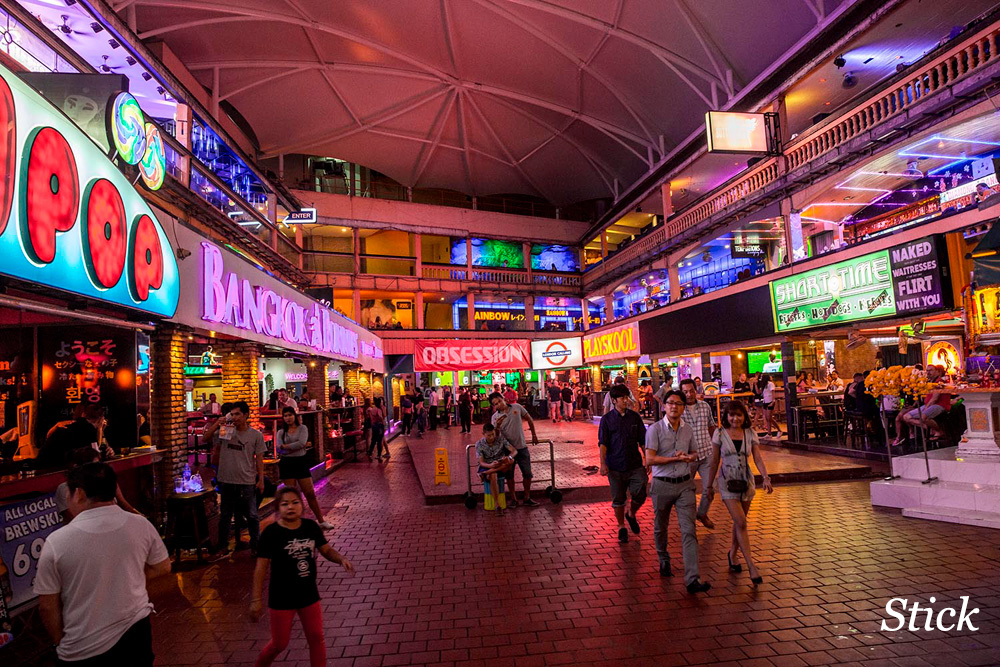 This photo taken a bit over a week ago shows the new roof.  The giant sailcloth condom will be installed later this week.

The draping of a giant condom over Nana Plaza and its transformation in to the world’s safest adult playground could be a lifeline.  Thailand is changing and the way in with which the farang bar areas once freely operated no longer sits comfortably with those in power.  The changes to Nana Plaza ensure the bar area can continue to operate.  Draping Nana Plaza with a huge condom and blocking what happens inside from view might sound like a scene from a slapstick comedy routine but it has the potential to prolong the life of Nana Plaza as we have come to know it.  It’s more than 30 years since Nana Plaza has been operating as a sex shopping centre.  Will the giant sailcloth condom give it the chance of 30 more?

Stick can still be contacted at : stickmanbangkok@gmail.com

Every Sunday, right in your inbox.

Stickman has left the building

Next in Stickman's Weekly Column