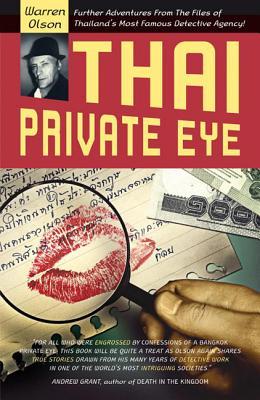 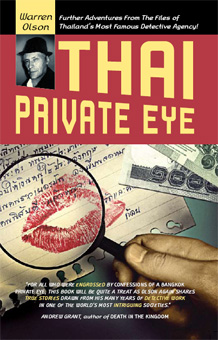 Thai Private Eye, Warren Olson's latest offering, is also the name of the investigation agency he started in the mid ‘90s. The latest volume features another collection of investigation reports from the man who was once Thailand’s most famous farang private investigator.

The first book was penned by ace author Steven Leather but Steve wasn’t involved with this project and I wondered whether it would capture the same feeling that the original effort did. I need not have been concerned. While it has a slightly different feel to it, it's well-written and pacy, in fact it's a real page turner.

Warren goes into detail and provides fascinating and insightful explanation of just why he carried out investigations the way he did. You can get right inside the investigator's head as he explains not only all the steps in the investigation but just why he chose to do it that way, and not another. This brings real value for not only is it an enjoyable readout you learn about not just relationships, but Thai culture too, something Warren clearly has a superior understanding of.

One drawback with Thai Private Eye concerns the editing which just had to have been be done by someone not familiar with Thailand. Rather a lot of factual errors slipped through as well as others that should have been picked up, wherever the editor happened to be. Claiming the redundancy pay doesn’t exist in Thailand is embarrassing when it is a massive part of Labour law – and has been for a long time. When a man from Switzerland starts talking about all the Euros he is prepared to send, you start to wonder and when it is suggested that to get from Bangkok to Pattaya you drive north you wonder how that investigation ended!

Overall, this is an excellent read and is highly recommended. Not only is it fun and interesting, odds are you'll learn a lot from it too!