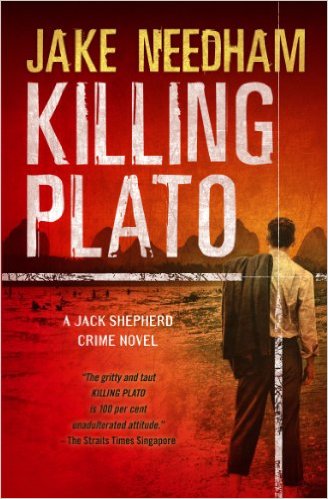 Jake's latest features the hero from his last book The Laundry Man, Jake Shepherd, and the world's most wanted fugitive, Plato Karsakis. Most of the book is set in Phuket though obviously Bangkok also features. That Jack bumps into Plato near the start of the book is no surprise and what follows is various US law enforcement agencies trying to get their hands on Plato while Jack finds himself caught up in the middle of it. As with all of Jake's novels, there are a bunch of main characters and I particularly like the bitch of a wife that the main character has. I just wonder who the unlucky woman is that Jake may have based this character on?

There are more succinct observations and anecdotes about life in Thailand in this book than many other Bangkok novels all put together. Naughty bars do not feature prominently in the books, although the main characters do visit such bars, just as real people do.

What I liked: Jake's silky smooth writing which for me put him in a class of his own amongst Bangkok writers when it comes to prose. This book contains so much about life in Thailand that you could just about make up Oh, and the story is pretty good.

What I didn't like: The ending still doesn't have that "big bang" but then it is a book, and not too many books seem to have the Hollywood style shoot-up that movies do.

Overall: Not only is the story very good and the characters excellent, Jake also provides an outstanding amount of explanation about the way that people go about their lives in Thailand. In many ways, it makes the book almost educational and old hands will nod in agreement with many of Jake's observations while newbies to these parts will learn a huge amount.

* Due to some sort of crazy anomaly, this book is hard to come by in Thailand. The main distributor in these parts for English language books, Asia Books, has only carried a very small number. To pick up a copy, check out Jake's website at www.jakeneedham.com