Moving along with my conviction to visit more countries in South-East Asia – I alluded to this in my last submission of April this year (re: the Philippines) where I had decided to get off my arse and see more of the world – not just Thailand which has been the extent of my travel for too many years.

I booked a Jetstar flight to Thailand from early June this year to mid August – just over 10 weeks in all, with a 16-day trip to Vietnam in the middle. It could be described as a visa run as it relieved me of the bother of visas to Thailand. The flight from DMK to DaNang (DAD) in Vietnam was an Air Asia flight which I booked prior to leaving Australia (just as well, see below).

At Melbourne Airport (as an aside, that place is too small for the job these days but there’s no sign of expansion on the horizon) I was asked to show evidence of the flight out of Thailand (to Vietnam) in order to get on the plane, similarly on the return flight to DMK at DaNang airport I was asked to show evidence of my flight out of Thailand – such are the requirements the Thai government puts on carriers.

Getting to Vietnam also involved preparing myself with a visa – two ways of doing this – mail your passport to the Vietnam embassy in Canberra with the appropriate form and money – they’ll have it back to you in 5 working days – registered post works fine, or, apply and pay on their website, download the PDF form which will appear on the site with your details, print it out and present it at immigration at the airport in Vietnam. You must nominate an airport on your application and then enter and leave the country at that airport. I chose this approach and it worked well. Leaving Thailand at Don Meuang was a potential shit fight as the international terminal was totally crowded. Fortunately Air Asia has a couple of auto check-in machines tucked away down the back and I used one of those – no queues there. One weird thing I saw at that airport was a queue of Chinese people 85 metres long (I paced it out) leading to the VAT refund point. Bloody ‘ell, is it worth it?

Arriving in Vietnam presented no problems and I was out of the airport in quick time after equipping myself with a phone SIM – unlimited internet for the whole time at moderate cost. Wi-fi is available just about everywhere in Vietnam, similar to Thailand. Taxis available outside the airport – ask if metered or not as the price I was quoted was twice the price of the metered taxi I used. That was the only time I needed to confirm meter usage in the trip. I had changed some Thai baht at Don Meuang as a precaution and this was very handy. Getting used to the gigantic numbers of Dong was a challenge – too many zeros on those notes – around 17,000 Dong to one Australian dollar is crazy! Didn’t see any coins, don’t think they have ’em.

I’d booked a hotel – the Mimosa 2 on the advice of Mega, a well-known contributor to Stickman – and while this was ok it was a bit out of the way for me so I moved into a similarly priced hotel in the centre of DaNang. It was during these early interactions with Vietnamese people that I found they knew very little English and so my total lack of Vietnamese was problematical from time to time. I also felt right from the start that these people are friendly, hard-working and pleasant. As soon as you start walking around you find that the motorcycle culture is similar but different to Thailand – the whole scene is Thailand on steroids – there are squillions of them and footpath parking is right out of control. Riding on footpaths is common and they ride so close to you that it pays to be very aware of what’s around you. Road rules exist presumably but not heeded much, and I didn’t see evidence of police on the job at all until the last couple of days there.

DaNang city is busy and a massive construction zone. There are various places of interest there and in the surrounding areas. A day trip north to Hue was a highlight for me, the guide not shy about pointing out the various sacred sites bombed by the US. To his credit he seemed to accept it as a thing of the past, and we’ve moved on now. In his place I might not have been so calm.

An aspect of a visit to Vietnam for people of my age is memory of the horrors bestowed on the country by misguided nations, including my home country, Australia. It gives me and I presume others in my generation reason to think about and reflect on life as it was then, compared to how it is now, now that hindsight is possible. The idea that western nations ‘should’ go there and do what we did, namely kill countless citizens, wreck their cities, towns, villages, infrastructure etc is horrifying. At least that’s what I felt. So to be able to go there, see some of the damage done, hear it talked about, look at the war museums, but still be genuinely welcomed by the people is . . . humbling, to say the least.

One particularly startling thing I saw during that trip was an Austin car – blue with dark blue side trims. In original condition. It’s to be seen in a Buddhist pagoda complex in Hue. Not a model to excite at any time, but this particular car has HISTORY. See pics – yes, it’s the actual car in the picture. Man – o – man, that was something else! 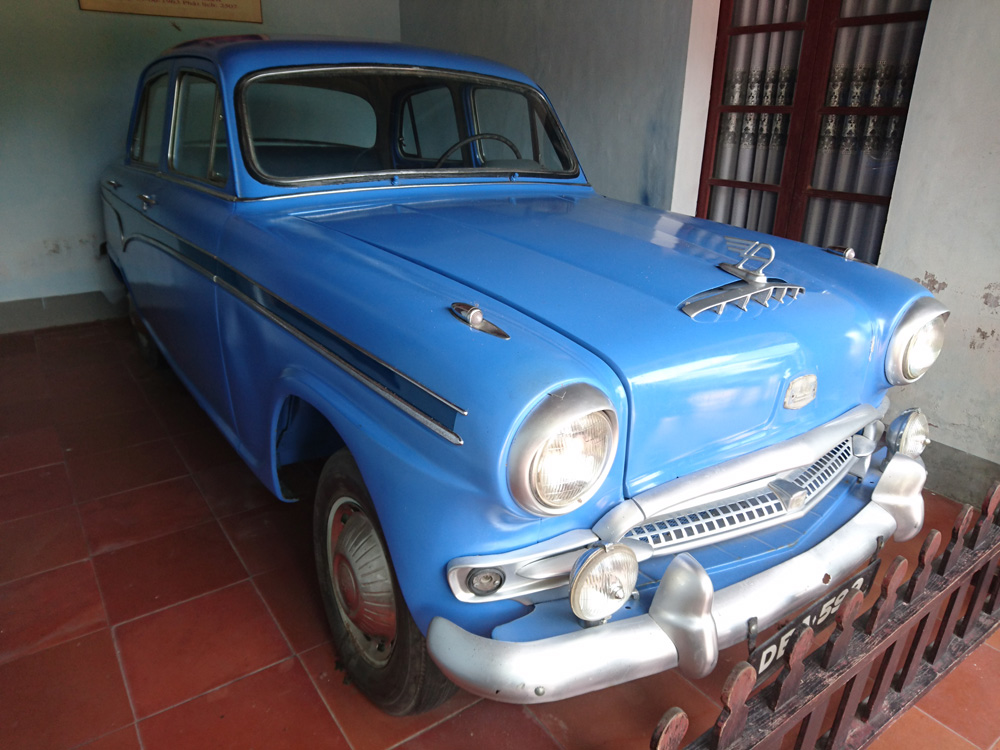 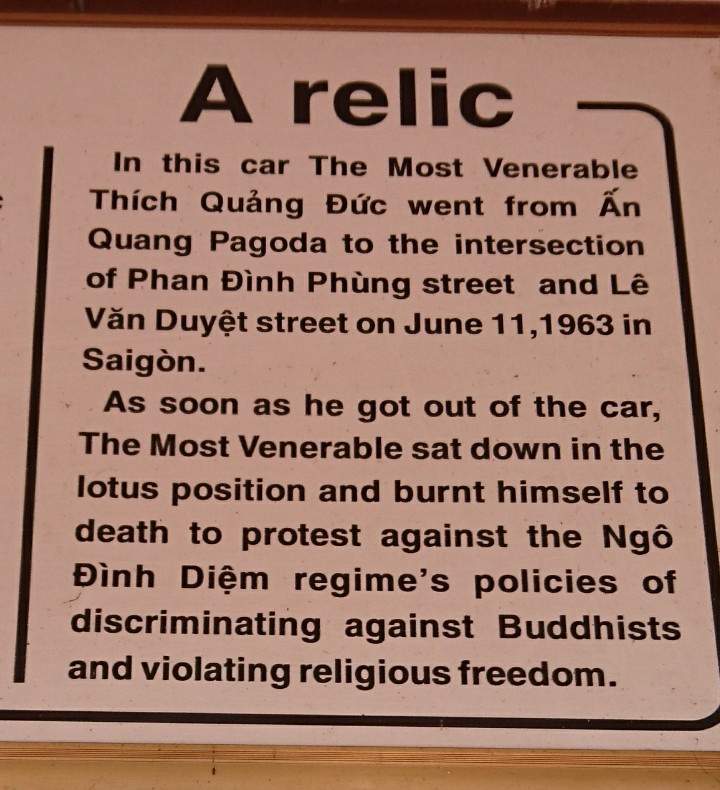 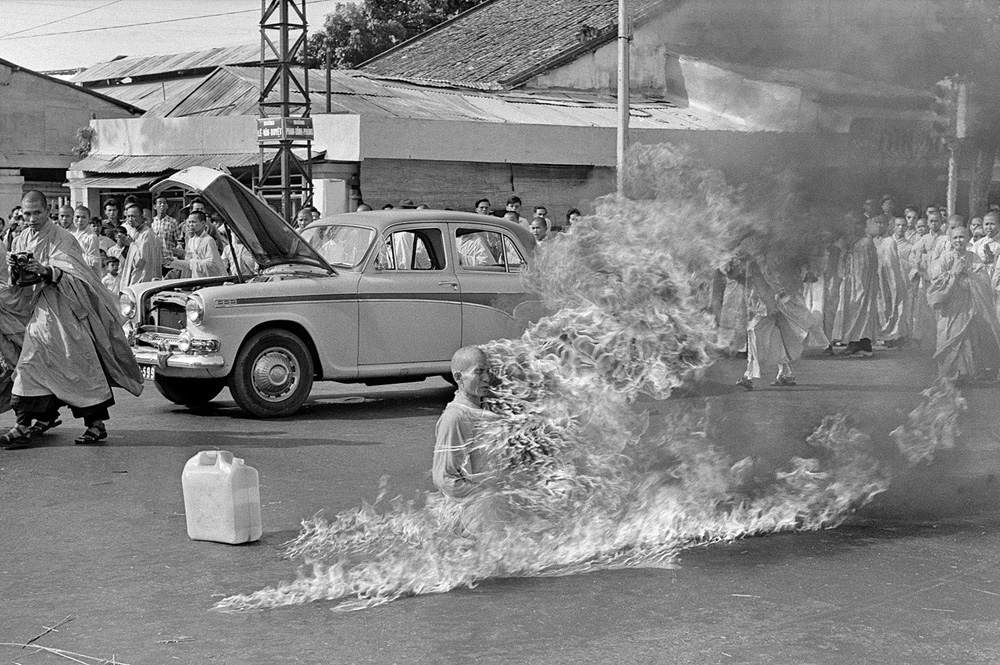 I recall seeing this hard-hitting photo in the Melbourne press at the time. These days would they show it? Maybe, but with all the grizzly bits fuzzed out I’d reckon.

After a week in DaNang I moved house to Hoi An, only 35 km or so to the south, but in effect a totally different world. It’s a ‘genuine’ tourist town, packed with Chinese, backpackers, old farts like me, young people from all over. Great vibe, I loved it. Stayed in an excellent roomy room in a house for little money (‘home-stays’ are the go there), rode around on a pushbike, ate local food – including those delicious pork rolls, drank local beer, had manicure / pedicure / ears cleaned / shave / massage – wonderful service – check out videos of this service on YouTube – it’s real! Awesome!

After all that, back to Thailand which seems bland by comparison! Inevitably you make comparisons and in this case I saw a people getting about their business unfettered by the crap I see in Thailand. For example, much reduced hierarchy in Vietnam. Thailand is genuinely hampered by class. Another example is the Thai maniacal adherence to mysticism / pseudo Buddhism / ghosts / animism etc. (I reckon the biggest growth industry in Thailand is building wats) – it’s all unproductive and very limiting. The Vietnamese have these things but nothing at all like in Thailand. I could go on.

When I’m in South-East Asia I love to get massage. The scene in DaNang was different from Thailand – they give you pants to wear for a start! It took a while to get any extra action – different approach is required to Thailand, however once I’d sorted that out, I got some very good massage action, especially in the tourist-oriented Hoi An. On thing particularly evident to me was that in Vietnam, not once was there any suggestion of sorting out a price for services before providing. It was really refreshing and welcome after experiencing for years the Thai approach which is to start a bargaining session halfway through. This is a real turn-off for me and I usually stop proceedings dead at that point. Not the same in Vietnam – it’s much more fluid and even at the end of proceedings there was never any of the bargaining / complaining / pouting / pleading bullshit you get with Thai some providers. As I said, refreshing, to say the least!

All of which means that I need to go back there and see places to the north and south – Hanoi, Saba, Ho Chi Min etc etc. Lookin’ forward to that!

I have been a fan of Vietnam since the first trip there and am very keen to get back before too long.