Things can get quite boring living in Chiang Mai, especially if you don’t speak Thai. However, every once in a while, out of the blue, something happens that leads to the term amazing Thailand.

On the way home on my motor cycle, after going shopping for food in Chiang Mai, I decided to stop at Kitchen with SolHy which is on my way home.

Kitchen with Solhy is a van with solar panels on top, which he uses to make electricity to power the appliances inside his mobile kitchen. That’s where the name solhy comes from.

The beef burger I tried was delicious, quite different to other burger offerings around Chiang Mai. 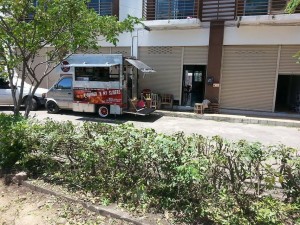 My immediate impression of the owner was of a very friendly guy who spoke perfect English and seemed highly intelligent and interesting. He invited me into his condo, pictured above, and we talked for more than an hour. It was fascinating to talk to a person who seemed to be both Thai and Farang at the same time. Can you imagine being able to discuss climate change with a Thai man operating a mobile kitchen.

We talked about many things but gradually he told me a little bit about his life story.

He was born in Issan to a Thai mother and an American services father. He lived in a dirt poor Issan village with his mother’s family until the age of seven when he was sent to an orphan school. After two years at the school he was then adopted out to an American family so he moved from dirt poor Issan to Washington state. He then became a fairly typical American kid but returned to Issan in his mid 20’s to find his birth mother. Apparently he drove up to the impoverished village where he was born, out of the blue, in a rented car. I tried to picture the fascinating scene of the meeting between birth mother and son in my mind.

Then he almost apologetically said he had written a book about his life so that his kids would understand when they grow a little older. He grabbed a brand new copy out of a box full of books and asked if I would like to borrow it.

Would I what!!! I have now finished reading the 300 page book in two days and found it fascinating. The book mainly covers his life as a young boy, up to the age of nine, now seen through the eyes of an educated American/Asian.

I found a web page that gives a description of the book.

The book is available on Amazon and he is also selling it for $10 (USD) or 350 Baht from his mobile solar powered kitchen in Chiang Mai.

A Facebook message gets the automatic return of the following message.

Thanks for contacting #Solhy via FB Meesenger. Technology can be unreliable at times so if you don’t get a response back in timely fashion please contact using LINE: bking86 or WhatsApp: bking86, thaicharisma@gmail.com, 0897587766.

I sent him a message today asking if he had ever heard of Stickman. I suggested he have a look at the next issue but left it at that.

If you want to contact him directly he is very approachable. He has become a strong Christian as a result of his life experience but you wouldn’t know it from talking to him. 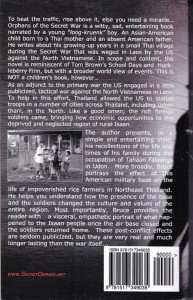 Just Another Day In Africa