My father-in-law died last week. He was 77 and very feeble and his demise had been expected for a year or more. It had got to the stage where people we hadn’t seen for a while expressed surprise that he was still alive. He had been living in our house, and it was interesting to see how for many of us life turns full circle. Over the past year he could do almost nothing for himself, had to wear a nappy (diaper to you Americans), and he could have only liquefied food that often needed to be fed via a tube through his nose. He was no longer able to walk and eventually he couldn’t even sit up unaided. He often slept about 21 hours a day, had to be taken to the toilet in a wheelchair, and each session in there would take 40 minutes or more. He could only talk in a few syllables at a time. As helpless as a baby.

He would need to be taken to the local hospital every month or so, where he had a private room if one was available which cost nothing as his son is a policeman. The same applies to teachers, soldiers and anyone working for the government (but not politicians). That is a LOT of people. Free treatment for all. The mother-in-law even had a pacemaker inserted which cost 250,000 baht yet she paid nothing. Ironically, the only charge made is after the person dies, 500 baht for bathing and 400 baht for formalin. On the last occasion he was transferred by ambulance from the local hospital to a bigger hospital in Kalasin. His heart needed to be pumped and then he rallied, as he so often had done before, but then his heart slowed again and the doctors were told to let him go as it was only delaying the inevitable.

It has often been documented and is generally true that, when it comes to organising anything, the Thais are found lacking. Even the simplest tasks are likely to become mired in confusion and chaos. Not so when it comes to funerals. The family had already discussed with him where he wanted to be taken to when he died, and he said his village a couple of kilometres from our house, the village where he had spent most of his life and where dozens of the family live. He died at midday, and by the time three hours later when they had taken the body 50 kilometres back to the village, to the designated house belonging to another one of his daughters, the refrigerated casket was there and people were already putting out tables and chairs and erecting a large canopy for the guests that would arrive. Within five hours of him dying my wife had even returned to our house and collected his clothes for anyone who wanted them.

People began gathering immediately, and that night my wife and several family members and a few close friends slept with the casket. I visited that evening, but then kept out of the way until the day of the ceremony. I’m not one for just sitting around for hours. Over the course of the next few days around 500 people came to pay their respects. Actually, mostly they just sat around chatting, men in one area and women in another as is always the case up Issan way, and probably all over Thailand. Bizarre. It is common for Thai houses to have a very large downstairs area rather than a number of rooms, and sister-in-law’s house is no exception and that is where the casket was laid, decked out with flowers and fairy lights and a photo of the deceased. Monks came and did their chanting thing each evening and on the third day the burning ceremony took place at a temple about a kilometre away. 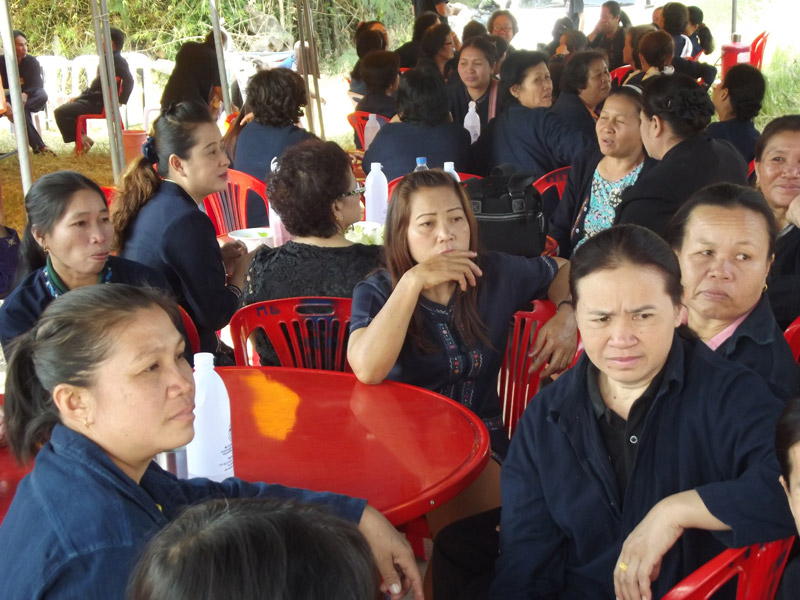 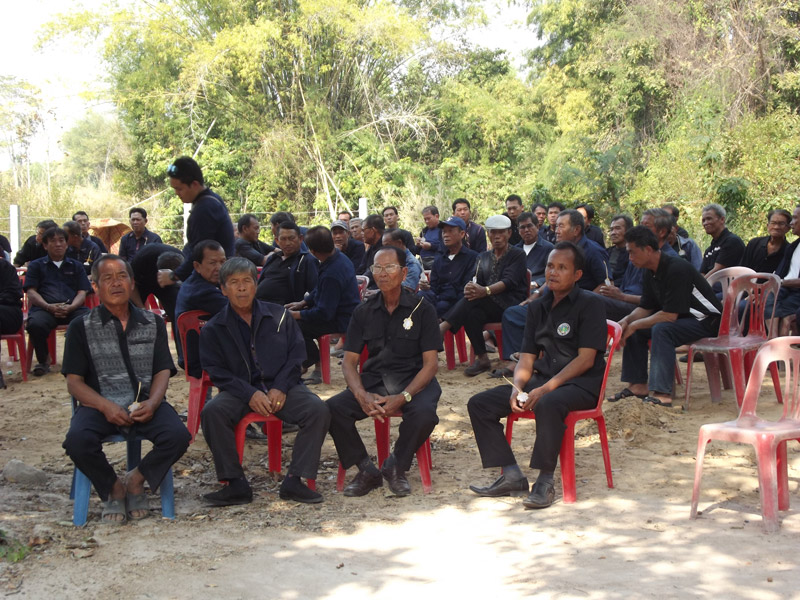 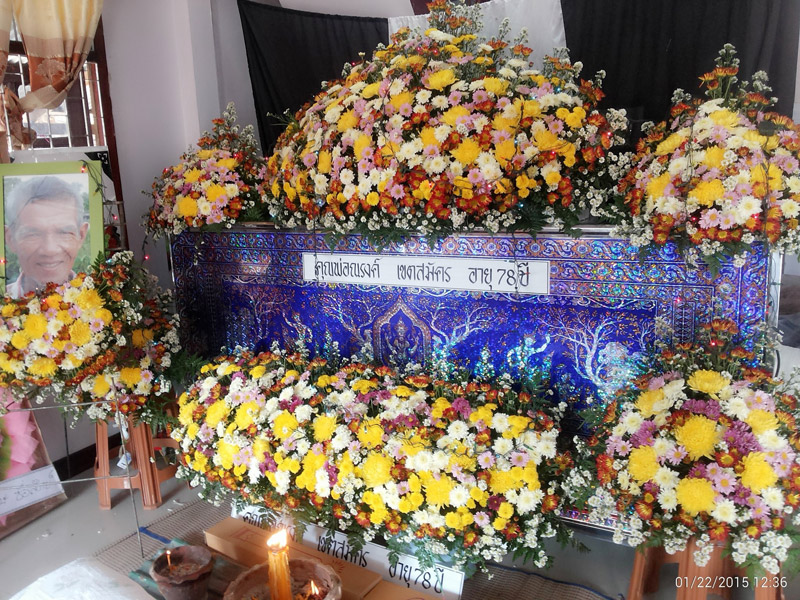 The casket was loaded on the back of a pick-up, which played some ethnic music as we progressed slowly to the temple with a police escort. Up front were some monks, and several ‘monks for the day’, relatives who had their head shaved and wore orange robes, all holding a long rope as if pulling the pick-up along. My wife walked beside the pick-up holding a large framed photo of her father. Once at the temple a large number of monks did their chanting thing again while a few of the women walked around handing out small sealed cups of water to everyone, taken from a large icebox. 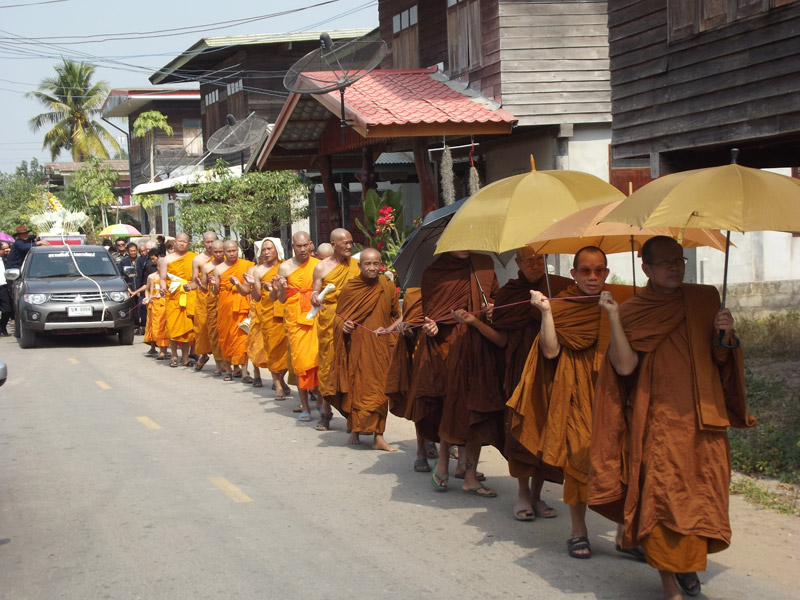 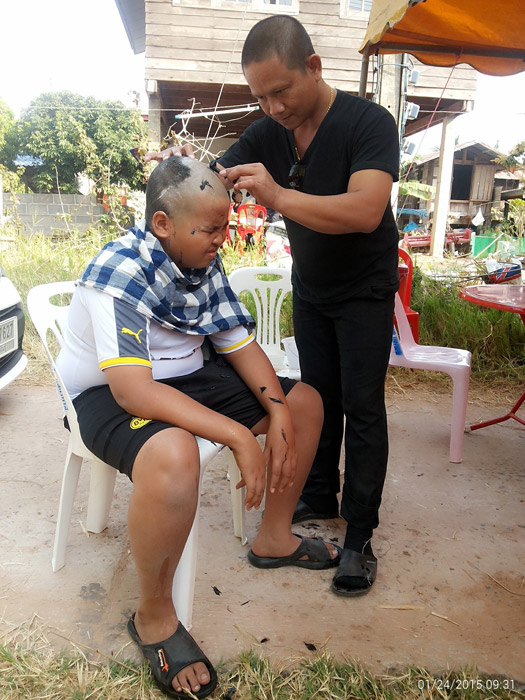 The next stage was a speech by the village head, and then the closest members of the family handed out cloth for the monks to dozens of the guests that were called forward, who took the offering up the steps into the area that housed the oven. Then a relative read out the story of the father-in-law’s life, and finally everyone came forward and went up the steps to walk past the casket, each collecting a wooden stick with a piece of plain white paper attached which they deposited near the casket and which were eventually burned with father-in-law. As they descended to ground level again each was given a small gift of a coin wrapped in a bag, handed out by close family. At other times people might be given a flimsy gold bottle opener, as we were with mother-in-law, or a bottle of paracetamol. It varies. 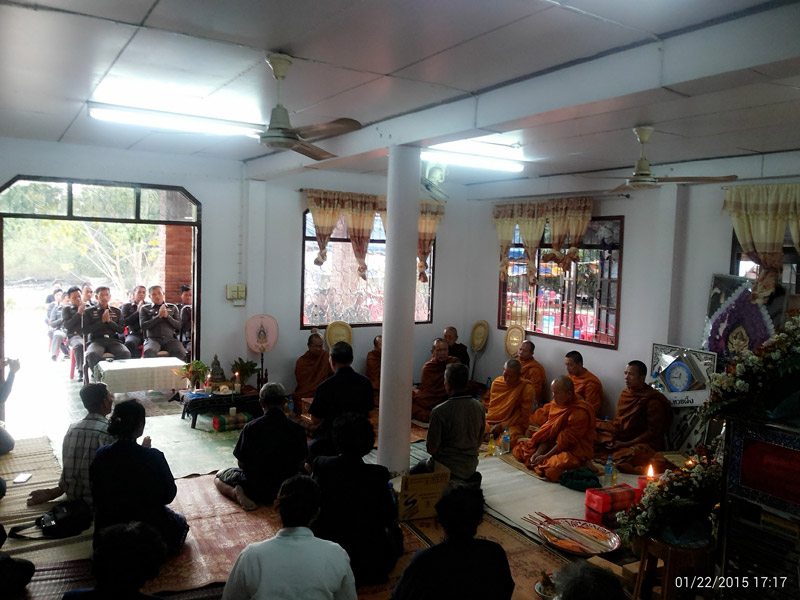 The final stage was the burning of the body. Close family ascended the steps, the coffin was removed from the refrigerated casket and opened, and several people doused the body with young coconut milk. It was strange to see him there, his neck distorted in the manner of Stephen Hawking. My wife told me that was to keep his mouth closed. It was also strange to see him wearing a pink jacket that I used to have before it grew too small (if you know what I mean!). That was chosen as he loved wearing pink. Then the coffin was rolled towards the oven and the fire was lit.

The next day family attended the temple again, where a post was put in the ground inscribed with details of the deceased. That was placed close to those for a sister who was killed on her motorbike, and the mother-in-law who died a couple of years ago. Most of the ashes were buried there, but some were placed in a small cask which was sealed inside a hole in the temple wall. 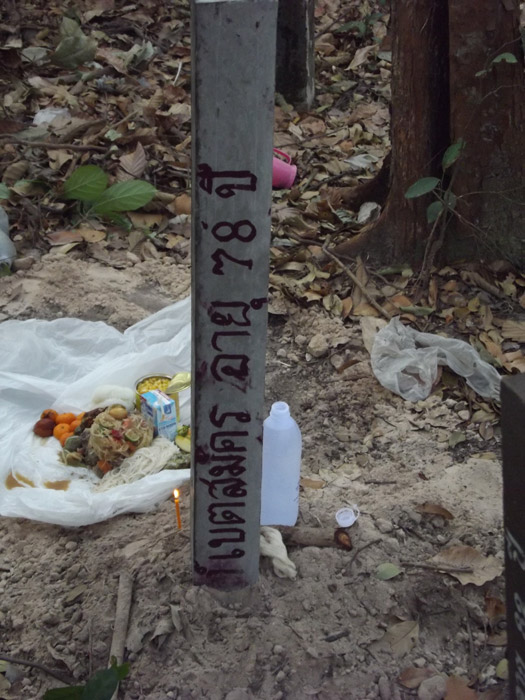 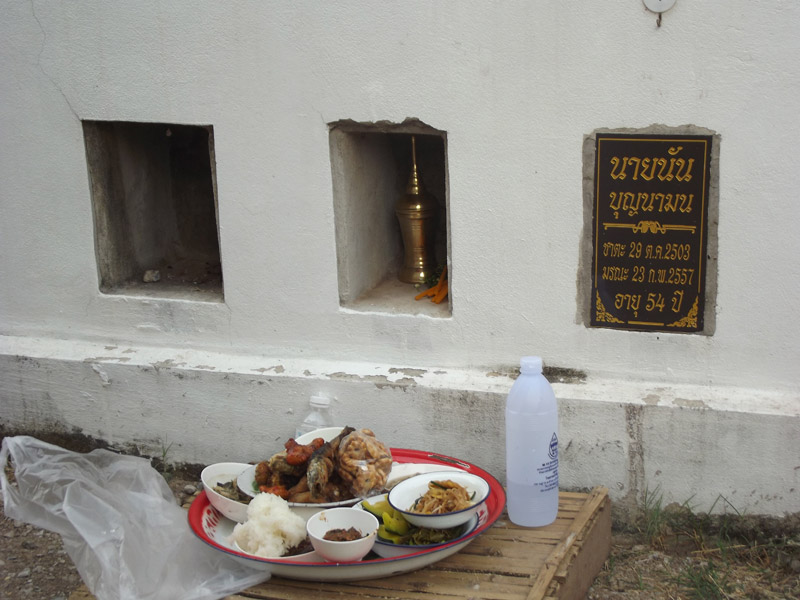 To be honest, some of my thoughts as I sat through the main ceremony, and while at the house watching everyone eat, was what was it costing. How often do you hold a party for 500 people, let alone have the expense of the service provided by the monks for several days, and the ceremony. My wife had made several trips and filled the back of the pick-up with food, including 100 kilos of chicken wings. Beef alone cost 38,000 baht. No alcohol at funerals though, only water. Each monk when they attended the house was given 100 baht, and after the ceremony a donation to the temple of 18,000 baht was made. There was no set fee. 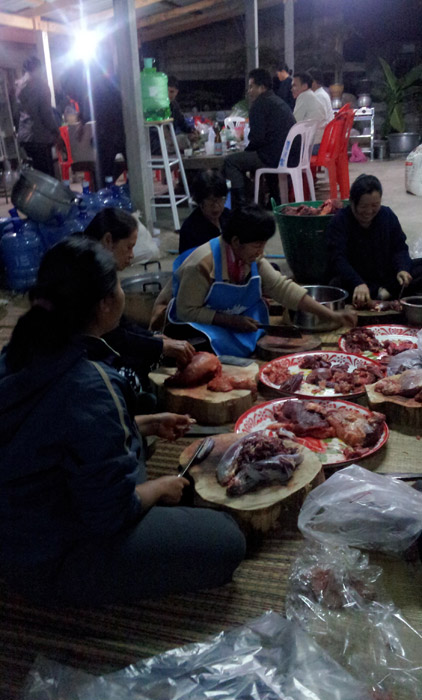 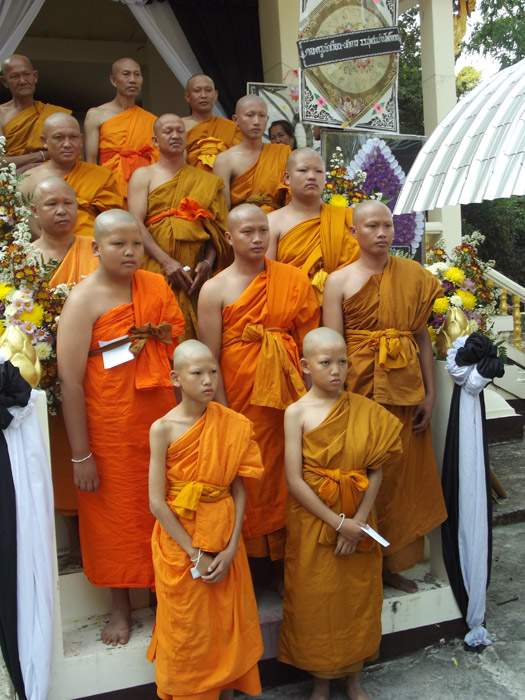 I need not have worried. Thailand is known for having close families, and that extends to entire villages. There is a kind of informal insurance system, which makes a great deal of sense when you remember that many (but very far from all) country folk are poor. When someone dies, almost every house in the municipality, which consists of several villages, contributes. The amount is just 3 baht per person in a house or 20 baht per house for up to eight living there, and those over 40 years old must pay 100 baht. The person who organises this receives three percent of the total, a tidy sum as it turns out.

As well, the majority of those who attend donate money in an envelope. That can range from 20 baht to 1000. Each donator writes their name on the envelope and all the names are later listed in a book with how much they paid. That sounds tacky but my wife told that this is so, when we attend anyone else’s event, we know how much to pay. If someone gave 100, we aren’t going to give 500. They’ll get 100 too. In all, the income came to around 300,000 baht, and the whole thing ended up not costing us (me) anything. In fact, each family member made a ‘profit’ of 3500 baht each with an unofficially adopted son, now a middle-aged Bangkok taxi driver, receiving 2000, with all vowing to keep the money in memory.

So that’s how it works. Everything very organised and efficient, with a group of women working incredibly hard for days preparing food for so many people, and nobody bankrupt by the experience. No tears that I saw either, as his death had been expected sooner rather than later. As a interesting aside, early on the morning after the ceremony the alarm on our pickup sounded for a couple of seconds, seemingly for no reason. Now, who did that?

Why Thailand is so Addictive to Western Men

Why I will Never Marry a Thai: Intellectual Curiosity