A New Year and a New Sea View Room in Pattaya

The year started much as it ended; going through one working girl after another. The notable exception to my routine is a new room at LK Empress.

Took this panoramic pic to illustrate.

This little perch affords me a great view of Beach Road and its comings and goings. Starting on January 2nd all the merchant tents were disassembled. This really makes beach road a much nicer place. For the first week I was here it was a mad house on both sides of the road. I spent most of my time walking in the street because it was the easiest option. Beach Road looks beautiful now, except for the nasty ass beach. At night time I can see the freelancers assembled below. I suppose it would be an easy task to just walk across the street and invite a girl upstairs. As much as I love risky behaviour this just seems beyond the pale when I have safer options close by. Still, I might give it a try in a drunken episode of poor judgment but not so far.

On New Year's Eve I stopped by Mandarin. It is a smallish bar but had a lot of great looking women. Being New Year's Eve I decided to ring the bell for the girls. This went over really well and I had a few girls sit with me. Both real stunners. It was early and I didn't feel like dancing or sex yet so I moved on after wishing the mamasan a happy New Year. Girls come and go…and I suppose so do mamasans but the mamasans seem to hang around longer and there is a better chance they will remember you at the same bar next year and treat you well. I then stopped by Secrets and bought drinks for four mamasans and the six girls I took on the Secrets yacht a few days ago. I really love Secrets, what a great place and the girls are wonderful. One of the girls who I had barfined multiple times and that I had run into randomly on the street after the guy who barfined her disappeared, was anxious for me to barfine her again that night. She has an amazing body, dances like an angel but on our last night together that was overnight she mentioned that maybe now she was my girlfriend. Really? Seriously? She was fresh off the farm having only been in the bar business for 2 months. But I didn't come here to have sex with the same girl over and over. I politely told her not tonight and moved on.

Something that almost felt like emotion gripped me for a minute as I looked at her disappointed face. As a human being I really started to care about her. If I had billions I think I would spend it extracting deserving women from the bar scene, educating them, buying them houses and….anyway we should all be glad I don't have billions.

Next I ended up at Alcatraz again. I am just going to say this now…and this is obviously only my opinion, Alcatraz is the best gogo bar in Pattaya. So many hot women, a great mamasan, very large and just a fun party atmosphere keeps me coming back. I ended up barfining a girl that was so Asian looking she almost looked like an alien. Took her back to the hotel for short time around 11. We finished just a minute or so before midnight. I jumped up and showered and then the fireworks started. I felt like I was in Beirut or Iraq. It really felt like a war. All over the city huge fireworks were blowing up just above buildings, in between buildings and over the beach. It was wonderful. I stood on my balcony with my arm around my short time Alcatraz girl. The fireworks went on and on and eventually I said ok, well Happy New Year and good bye. I tipped her well and ushered her out.

It was a new year and I decided to start it off with sleep.

For the two days and nights that followed I struggled to find Pattaya entertaining. Russians are a scourge and without listing all the rude things I experienced from these bloated rude primates I will just say that Russians have ruined Pattaya. If you disagree, feel free to buy a condo here but I never will. I come to Thailand because I love the Thai people. I certainly will never visit Russia. I can't imagine the amount of bullshit you would endure when you are in their country.

I wanted to mention Soi LK Metro. This is the place to go for day time gogo fun. There are three gogo bars that open at 2 p.m.: Showgirls, Bachelors and one more to the right of Bachelors that I don't recall the name of. What a great find! I knew there were gogos on this soi obviously but had never stopped by during the day. Showgirls is my favourite. The most ladies and the most fun. 70 – 75 baht beers at all these places during the day. I barfined a few girls from these places for short time. There are rooms just next door. 500 baht – 800 baht if you want a "big" room. One of the ladies spoke perfect English. I always feel very lucky when I find a lady who speaks excellent English. Hot is great but if you can't communicate well it can get extremely boring. My Thai is about as good as the average bargirl's English so anyway, English-speaking working girls are awesome.

One of the girls had huge fake breasts that felt like marble bowling balls. What a turn off!

I also had dinner at Beefeater Pattaya. Another great steakhouse. They asked if I had a reservation which I did not but they squeezed me in. To be safe I guess make a reservation. I had the filet and lobster soup which with tip was 1,000 baht. You may notice I cut into one of the pieces again before remembering to take a pic. Sorry! 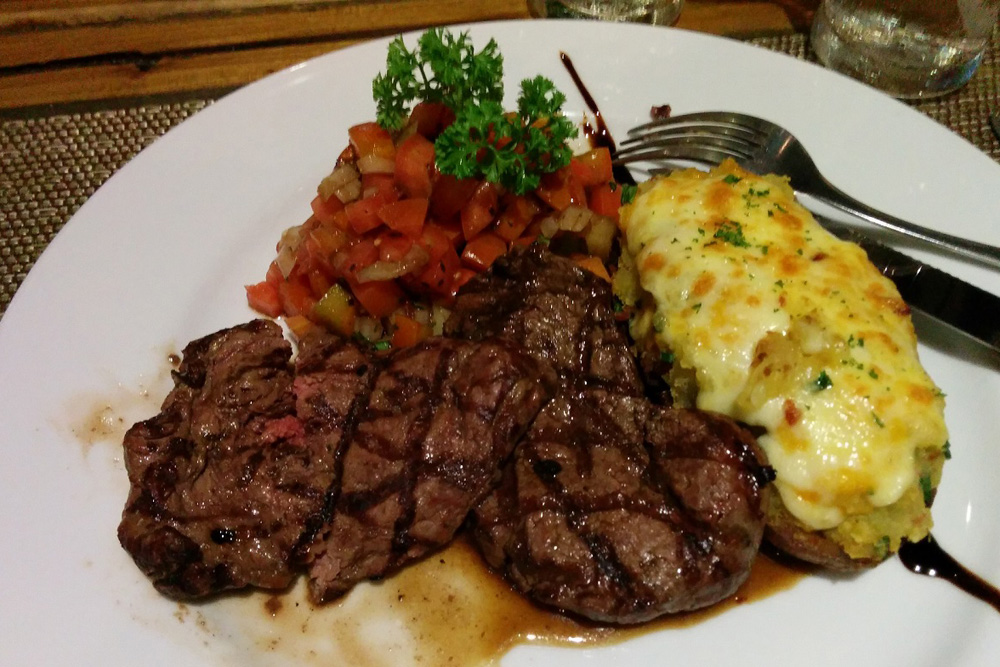 The food was wonderful and I would say it was near the best piece of meat I had in Pattaya. I know, I know, there is a working girl joke in there but I will refrain.

I also went to a little side street dirty massage place. I wanted a four hand massage. I got one and it really wasn't getting me to where I wanted sex.

I told them ok done.

They said, "Never have this happen before."

The massage was terrible and sex looked like it would follow suit. Oddly enough the place is called "Best Massage." They looked sad and I didn't want to denigrate their opinion of my homeland.

I tipped them nicely and wished them a happy new year. Oh, money! Smiles all around.

The morning of January 3rd I got downstairs too late for the free LK Empress breakfast. So I went in search of something special. I thought maybe the Hilton would have a buffet. They do..I was too late for the breakfast buffet and the lunch Buffet didn't start until noon. Being at the Hilton however I was curious if they were guest friendly. I asked at the front desk. 1,000 baht joiner fee. Yikes. I thought staying five star next time would be nice to avoid Russians but not worth it I suppose. I can only imagine the stink eye I would get every time I brought a girl back.

I ended up eating at a little English Breakfast place on Soi 7. It's on the corner of the soi that connects to soi 8 closer to 2nd road. Sorry I didn't get the name. Decent omelette and well whatever.

I need to pick up the pace. I have five nights left and will try and get as much Pattaya as possible before I head to Bangkok for what I hope is not a run in with a civil war.