There is absolutely nothing to do in Mongolia from a sightseeing point of view. There is really no reason on earth to go there.

So when I asked why I was going, I simply replied, because I have never been there before.

Mongolia, now the 2nd largest land locked country in the world, once ruled an empire from Korea to the Black Sea. Currently bordered by Russia and China, both of whom have ruled the country at one time, Mongolia has been independent since the fall of the Berlin Wall. 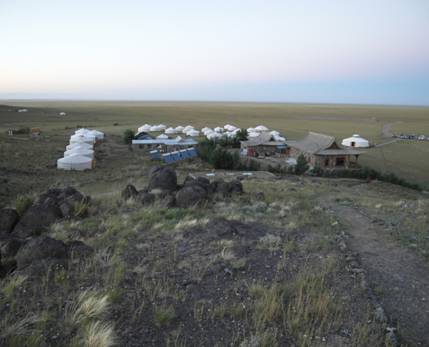 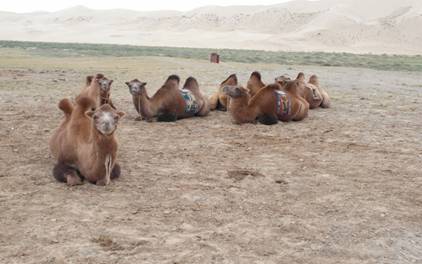 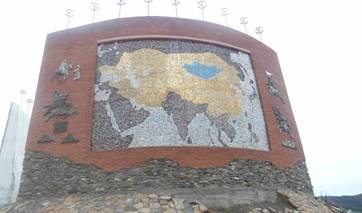 Now one of the least densely populated countries in the world, with only one person per square kilometer (outside the capital), Mongolia has 3 million people in an area three times the size of Thailand. However, it has 40 million livestock, including sheep, goats, horses, cows and 300,000 camels.

The capital, Ulan Batuur, is a shithole. The Mongolian people have for thousands of years been nomads, and have despised the idea of living in cities. While half the population today lives in the capital, one senses that none of them really want to be there, and so they have not done anything to beautify the place. We spent one night there when arriving and another when departing and, believe me, it was more than enough.

When one leaves the capital, there are no roads, hotels or restaurants. One drives cross country using rudimentary GPS and guesswork. Only Mongolians are allowed to drive.

Since there are no roads, the GPS does not say “turn left at the next intersection”. Rather, not unlike a boat, you key in the co-ordinates of where you want to go to, and then follow your nose as there may be a river or mountain between you and your destination.

Driving is done across open fields of grass, through rivers and mudpiles, and across numerous rocks. We broke down, got stuck, or simply lost any number of times.

As there are no hotels, you stay in “gers” (you might know the Russian word “yurt”) and eat in a communal dining hall. 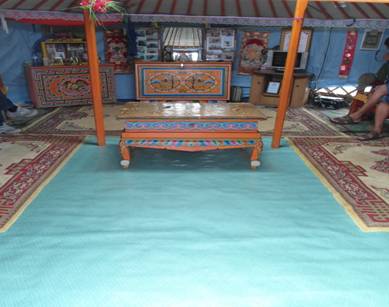 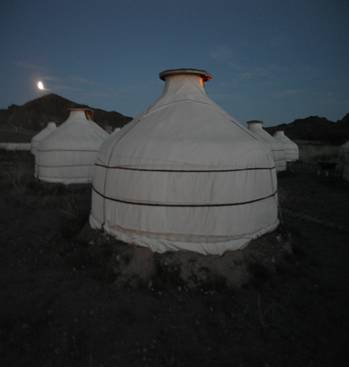 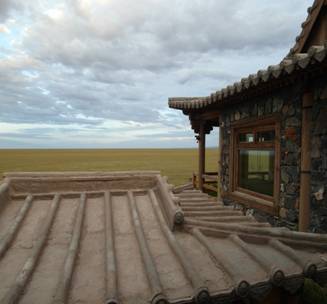 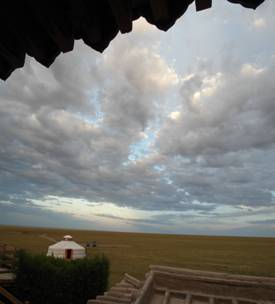 These camps are positioned throughout the country. The cheapest go for $5/night, but we went luxury and paid about $100/night for gers with attached bathrooms and three meals a day. Even the best gers had no connected showers but the communal shower was always sparklingly clean, although there often was no hot water.

While known for its number of clear days, weather turns cold quickly. The capital city is the coldest one on record. We were there in late summer, when it was 20 – 25 degrees during the day and as low as 5 at night. Extra blankets warded off the chill, as well as the wood burning stove placed in the center of the ger.

The gers are comfortable for two people, with a bed, a dressing table, and wood burning stove. While you have to duck in to get through the low door, inside there is enough height to fully stand up. Gers are designed to be taken down and re-erected in one hour, and nomad families might move their ger up to four times a year.

In the country, you might drive for 50 kilometers or more without seeing another soul. When you come on a ger, it is customary to stop (sometimes to ask for directions). Local people are open about inviting you into their ger. They very often have two: one for sleeping and another for eating.

You are always offered food and drink. The food is usually dried curds and the drink is salted milk tea. Later, they will bring out fermented mare’s milk (4% proof). 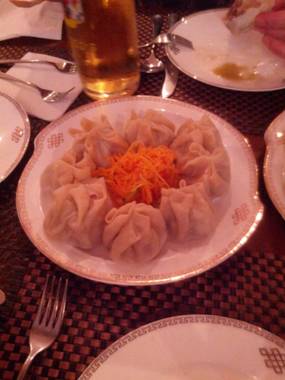 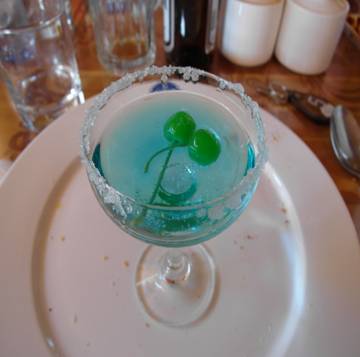 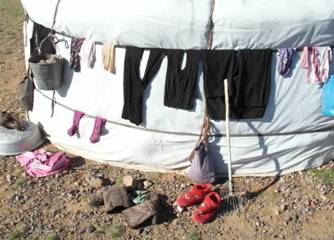 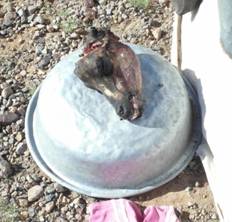 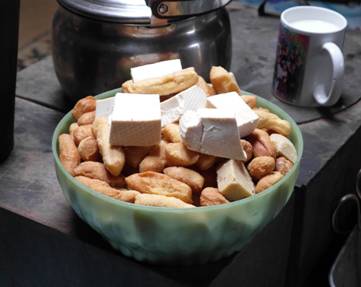 Outside the ger, sheep’s heads and laundry are dried.

The food is mostly mutton. Some of the better ger camps had vegetable gardens so we could get some fresh things, but mostly dinner was a salad, a soup, then meat with a starch, and a dessert. Local dishes were boiled dumplings and a wok fried noodles like yakisoba.

Thankfully, there was a lot of local beer.

One night for dessert we got Sprite with green maraschino cherries.

When in the countryside, away from the ger camps, sanitary facilities might sometimes be rudimentary, but nature always provides a way. 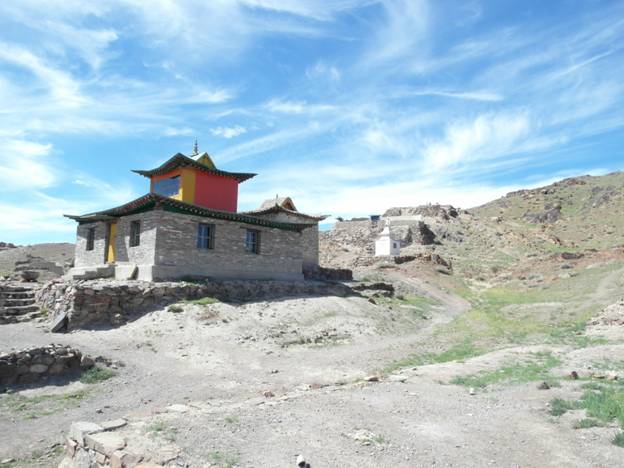 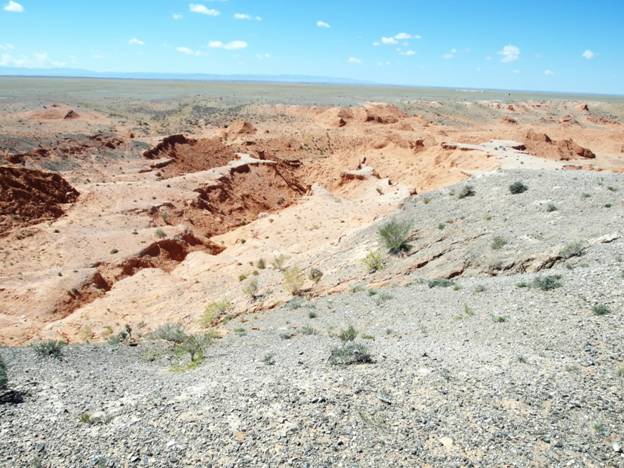 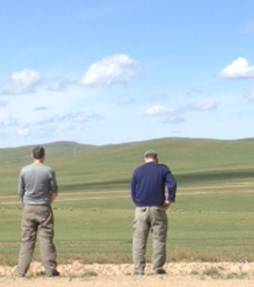 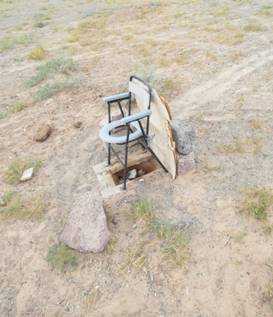 Roy Chapman Andrews, the inspiration for Indiana Jones, discovered the first dinosaur eggs on this spot in the Gobi Dessert in 1923.

The country today is about 50% Buddhist. Stalin ordered purges to destroy the monasteries so few remain. This one was completely burned with 200 lamas killed, but now some monks have returned to start up again.

Lost one day while driving, we stumbled by accident upon a “naadam”, or village festival.

I said to my guide at the end of the trip, You have a beautiful country but there is not much to do. Yes, she said. Everyone says that. Isn't it wonderful? 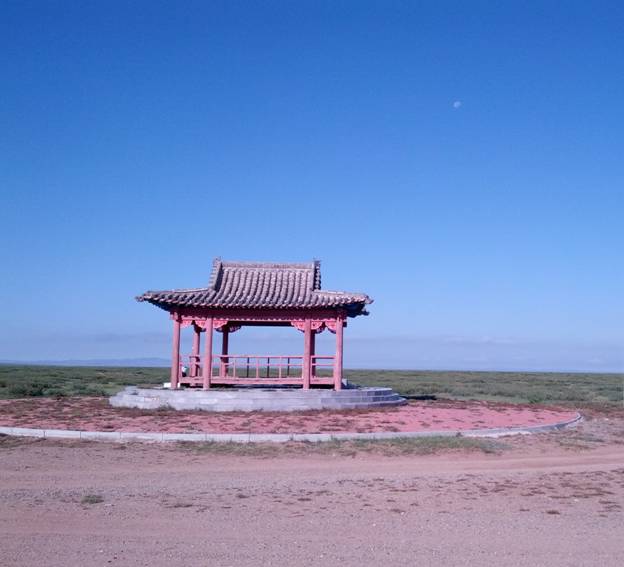 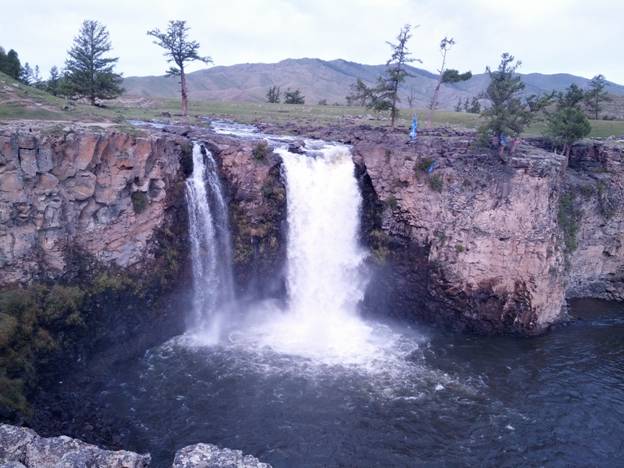 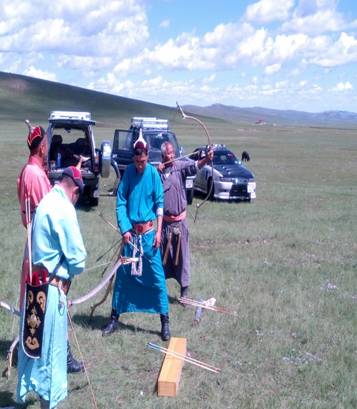 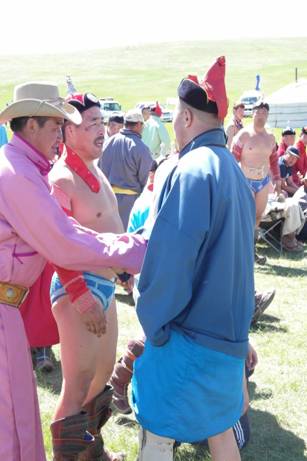 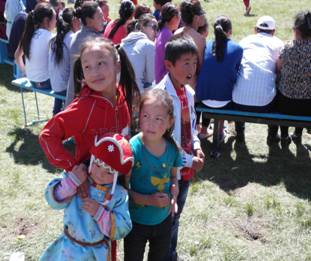 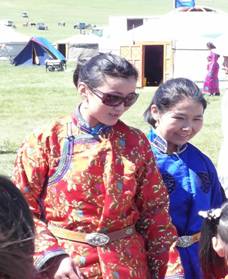 Don't go applying for a job with the tourism agency of Mongolia!