After a few perfunctory exchanges with my driver at Don Meuang, we were en route to the fabulous Sukhothai Hotel in Bangkok–in our E320 Mercedes.

I demurred when my driver suggested a visit to a "fish bowl" massage establishment. In a "fish bowl"…beautiful women are presented to you. They are behind a large glass window. Each girl sports a number on their dress. It is your choice. Take your pick! So many women…so little time!

With layovers, it was a 25 hour flight….door to door. I was ready for a hot shower. Then a late lunch at the Pool Terrace Cafe and Bar. I don't smoke…but on this occasion, I had a pack of Dunhills. French cigarettes. Pure tobacco. No chemical accelerants. No fiberglass. Just me, my Dunhills…and a bottle of Cabernet. I was in S.E. Asia for the second time. I would enjoy every moment.

The Sukhothai is arguably the finest hotel in Bangkok. Better than the venerable Oriental. There is always a harpist in the lobby, as I enjoy my caffe' Americano. Her music was delectable. Accomplished. Music from God. Almost as lovely as Mozart's piano concerto No. 21. I love Mozart. Mozart composed 27 piano concertos. The most splendid works are Nos.18-25. The concertos virtually all cluster at Mozart’s highest level.

I abjured vis-a-vis the "fish bowl"…largely because of Mozart. Mozart said: "”I cannot possibly live like most of the young men today. First, I have too much religion: secondly, too much love for my fellow beings and too horrible a disposition to seduce an innocent young girl; and thirdly, too much horror and repugnance, dread and fear of diseases, and too much care for my health to scuttle with whores.” In other words, I would not succumb to the vagaries of sexual urges. My assiduity in resisting the temptations of Bangkok is legendary. After all, why exhibit and extreme disregard for conventional morals?

The Dark and Lugubrious Sub-Soi

Khun Khom was my driver at the Sukhothai. An E320 Mercedes at my disposal. Khun Khom worked an 18-20 hour day. Sleeping on a mat (on asphalt) in the parking facility at the Sukhothai, when his services were not requested. He would try to short-circuit sleep deprivation if the opportunity presented. Always ready and available during my 14 day adventure. He became my guide. He knew the ropes. He ran interference for me. We became friends. I believed that Khun Khom "had my back."

I showered and put on my default black suit. Maybe I would have a drink at the Novotel. Make it a short night. I decided to take a taxi. I positioned myself in the short queue at the grand entrance of the Sukhothai. I would allow Khun Khom to rest a bit. I recall scintillating social intercourse with a sophisticated British couple returning from dinner…as I waited. And then my taxi rolled into position. The driver was rail thin. He possessed a nefarious countenance. He did not appear to be Thai. Maybe Vietnamese or Cambodian. Against my better judgement, I proceeded.

I am quite familiar with Sukhumvit Road and its environs. In 1998, I was billeted at President Park on Suhkumvit Soi 24. Sukhumvit provided a point of reference. In a city of 12 million, I successfully navigated the sois and sub sois. It was exhilarating. I always felt at ease. Just me. Bangkok can be electric. It's heterogeneity provides contrasts that you will not find in the homogeneity of Singapore.

The Sukhothai is just off Sathorn Road. This time I was venturing into terra incognita. I did not know the lay of the land. It was a monumental lack of good judgement on my part. If the taxi driver did not follow my instructions…I would be oblivious! In his broken English, he continuously suggested something lewd and raunchy. Repetitively, he would persist in trying to determine my level of interest. I would wave him off. I would say, "I am just going out for a cocktail." If I desired satisfaction of my quiescent libidinal desires, he could apparently arrange just that. And I realized he would be incentivized through remuneration… for delivering the "falang" to the the venue he had in mind. I was concerned. I did not know my location. He continued driving. I contemplated contingencies. Why was I in this taxi? Let me answer that question: Patently absurd judgement!

The taxi driver inexplicably turned right… and took a tangent off Sathorn Road. We entered a dark and narrow sub-soi. I was filled with trepidation. I remember my first thought: "I am overdressed for this event." As we continued down the dark sub-soi, I noticed it was lined with a phalanx of goons. To my left side…I counted twelve dodgy characters. Staggered at approximately 10 meter intervals. My only thought: "This is not good. I do not want to go out this ignominiously…9000 miles from home."

The taxi driver (despite my protestations) continued driving. I was being plunged into an inextricable mess. I was in the middle of nowhere. The buffoonish taxi driver didn't attempt to inveigle me into perdition. He just drove. I was not consulted. Apparently, I was being exposed to the venom of evil.

I believe that "no man can do wrong with impunity." And "no one is evil without loss or damage." But I felt like I was going to be challenged in a way I had never experienced. In ways that I did not want to imagine. I thought of Alexander Solzhenitsyn's essay on "gaining the moral leverage." But I realized it would not apply under my set of circumstances.

According to the stoic philosopher Epictetus, "there is a moral economy in the universe." But probably not on this particular sub-soi.

In a spiritual battle, the leak in the dike always starts from within. What was I really doing in this absurd set of circumstances? Was I trying to titillate a desire for adventure? Was I trying to push the envelope…half a world away from home?

Epictetus said that "man should concern himself only with what he can control and suffer what he cannot influence." Fear is an emotion, and to Stoics, all emotions are acts of the will. Threats have no effect unless you fear. So I decided right at that moment, that I would not be fearful. I was leaving the world I knew, and I was entering the world of Epictetus. These goons can take my life, but they cannot take my will.

Solzhenitsyn said: “There is some good and some evil in all of us. But the line dividing good and evil cuts through the heart of every human being."

I assumed that the "fur was going to fly." I expected to be enveloped by a number of ominous characters. I felt a profound sense of foreboding. I would comport myself with determination and resoluteness. I would attempt to neutralize the three men advancing the taxi. After that, I assumed it would get ugly very fast. I was utterly composed. A mode of egress was nonexistent. I would not attempt to flee. My will would remain intact. It was my reality. Fear stops you in your tracks. Sympathetic dominance kicks in and you go into vapor lock. You must remain supremely confidant.

The taxi driver stopped diagonally in front of an unprepossessing brick building. A rusted light fixture with a single incandescent bulb directly above the nondescript entrance. Three Thai men are now standing at the front of the taxi. I get out of the car and approach them. One of the three men encourages me to enter the building. He said, "what can we do for you." Maybe it was a Thai only brothel. Possibly a gambling venue. Or did they want to harvest two kidneys and FEDX them to Shanghai on ice?

In Thailand, pointing at someone is a major cultural faux pas. It is considered hideously condescending and impolite. But I was impertinent. I pointed at the driver. A rather slight man. Nefarious in appearance, and wiry. I proclaimed that he had the temerity to disregard my instructions. Discursive staggerings with the front man persisted for a minute or two. I assumed that when I turned and looked in the direction of Sathorn (at least 300 meters) I would be forced to engage a dozen Thai goons. You will never fight one Thai. Ten or more will descend on you with great rapidity. And they are vicious. Very few options. But I looked great in Armani.

I turned and realized, incredibly, that I was not surrounded. I felt an amazing sense of calm. I proceeded to walk resolutely to Sathorn Road. I walked past several Thai men. I made no eye contact. I walked leisurely, as though I was in Central Park in New York City. I was taunted. Profanity laced barbs. "The f–king foreigner." We were in close quarters. They exhibited pure and unadulterated loathing. I did not exhibit perturbation.

When I reached Sathorn, I quickly hailed a taxi. Traffic was snarled. We sat in traffic interminably. Would I be extracted from the cab and then pummeled. I asked the driver if he could drive me to the Sukhothai. He said "yes" without hesitation. I was concerned that he might be complicit with the characters on the sub-soi. Maybe we reignite this nighmare all over again… from the opposite end of the dark soi.

I arrived safely at the Sukhothai. The doorman said, "you're back early." I nodded and proceeded to my room. As I sat on the front of the bed I was depleted, and in a paroxysm of introspection. I contemplated a return flight to the U.S. in the morning. 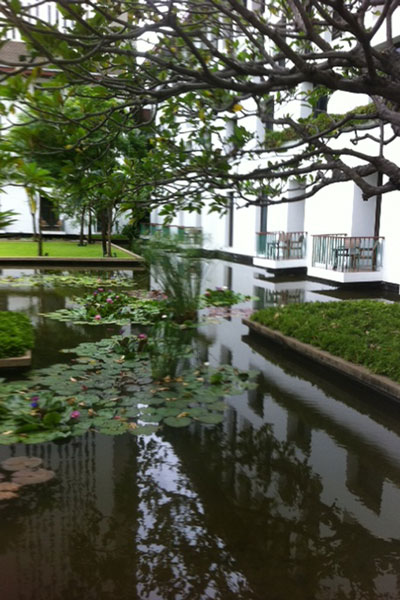 The Sukhothai is indeed a fine property and some swear by it as the best in Bangers.