After reading Stick’s weekly about Sawadee2000’s house in Lampang, I was amazed at the features and apparent quality of the house for that price. I shook my head when Stick said that it would not take much more today to duplicate that house
for a bit more than the 3 million baht Sawadee paid for his. My experience tells me that the house would go for at least double and probably triple that price on the market today. In talking to Sawadee he told me that his luck in finding a
good set of builders was probably the biggest factor in holding the price down. Sawadee’s wife must also have been a super good bargainer in purchasing the materials for his builders.

BARGAIN on EVERYTHING: As Sawadee 2000 said, his wife worked to get the best prices on everything that went into their house. My current house was advertised for 5.5 million baht. I contacted the builder directly (an expat from UK with
a very good track record) and dealt with him on the purchase and asked for a deduction because he would not have to pay a 5% realtor commission. We were also able to decline a furniture package that was included in the price because we already
had some furniture from our previous house. My last bargaining chip was a gamble on the integrity of the builder. We had the cash from selling our previous house sitting in the bank. I asked if we could pay him the amount of the first 4 (of
5 payments) payments for the house on signing the contract, for an additional discount. Our price was now 5 million baht which was the price I was shooting for when I first found the property.

A big factor in any housing purchase is the cost of the land. The cost of land since I have come to Thailand in 07 has risen dramatically around everywhere we have lived. Sawadee surely paid a good (low) price for the two lots he purchased
for his house but his house occupies most of that land and I have no idea what he paid for it but surely it was not much. He did not even know how much land he has (in terms of wah [400 sq. meters) or rai (1600 sq. meters)
and did not know what the size of the house is in terms of any unit of measure. A big positive factor in his land cost was that water, road and electricity were already in and readily available to him.

If the land has been filled with dirt (very common) to avoid flooding problems and it has been less than 5 years since being filled then you can assume your land will continue to compact or “sink”. To compensate for that
you would need a very deep and strong foundation for your house to avoid the cracking so common in the walls of the less costly Thai built houses. Stick mentioned Sawadee’s solution to this problem. 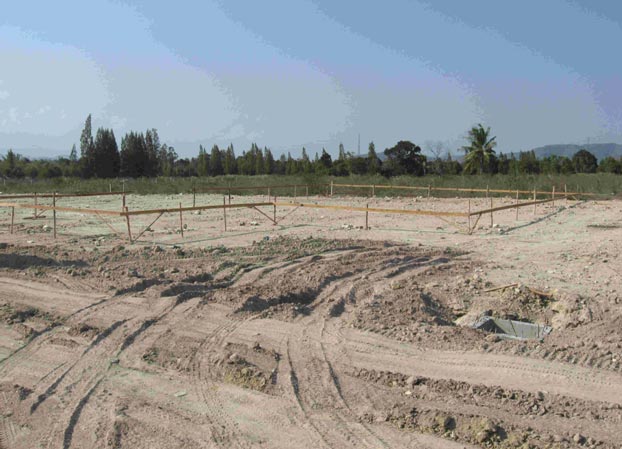 Not compacted filled land for our second house.

My Thai wife and I moved to Hua Hin in 08 to our first house here built where raw land in the area (6 km inland from the center of Hua Hin— over the hill) was being advertised at 1.5 million/rai. The builders were purchasing larger
plots of land at around 1 million a rai (or less) at that time. Today those same plots, that are still undeveloped, are listing for 2 & 3 million baht/rai. The builder of my current house has never paid much more than 1 million baht per
rai for any property he has built on. Now after building 4 projects next to each other, the land has become too expensive for him (mainly because of his developments) to consider building more in this area.

As an example of why the cost of land impacts the price of the house, you have to take in the amount of land per house (example our house is on 500 sq. meters of land). Project has to have roads and guard house to you take that land out
of what can be used for housing. Bottom line here is 9 rai nets out with 15 various size building plots plus space for infrastructure.

Electricity: When you purchase a single lot in a developed area you could usually count on having convenient access to electricity. Make sure you do have it.
Water: Check on the availability or access to water. Water is NOT a given
and many areas may have water during rainy season but NO water delivery a few months after dry season starts. You could have a water well on your property too if it is bored deep enough to supply water all year around. Example: Water problems
abound in Hua Hin and any or all of the above may apply here.

Internet: Check on availability of internet via telephone line or reasonable speed (3G) wireless access. When we moved to our first house we had to pay TOT 350,000 baht to string a line 3 km from the nearest main line. With all the housing
developments out here now (7), there are three internet carriers to choose from.

AREA: This should be easy as it would be the same as any property you would purchase in Farangland. Just make sure there are no negatives in the area that would detract from your enjoyment of your property. Look for those god awful speakers
and if in area expect to be awoken at 5:30 – 6:00 AM with the daily, weekly or monthly morning announcements and music.

HOUSE DESIGN: For an existing property this is again the same as you would have done back in Farangland when looking for a house to rent or purchase. If building a new house you have to be able to visualize what the house will look like
from looking at plans. This can be difficult for some as there are just a lot of little things you don’t consider until you see them in the flesh. Finding someone who can draw the plans and working with them to put down on paper what
you want should be fun. I was lucky when I purchased our second house in a housing estate. After we negotiated a price for the house in the development, we just expected that he would build the standard house with the plans he had previously
showed us. He gave me a complete set of plans and immediately asked what changes or modifications I would like to make. Not just minor changes to cabinets or such but moving walls, larger pool, adding rooms here and there and changing the
roof to cover all the patio area I wanted outside. Anything and everything was on the table. Of course there was an additional bill (166,000 baht) for the changes but it was not significant enough to go over our budget for the house.

BUILDING THE HOUSE: As you might expect from reading about Sawadee’s experience it is good to be around as much as possible to insure that everything gets built according to the plans and not just the easiest way for the worker.
Our first house was purchased about a month before it was to be completed so we didn’t have much say in any changes. We were completely unaware of any of the pitfalls of building in Thailand and the shortcuts that will be taken to cut
costs. We thought our builder was reliable because he was a farang from the UK. Little did we know, until many months later, that he was also a fugitive who had fled the UK the day before he was to be sentenced on a drug selling charge. The
faults in construction and the problems we had to deal with were numerous and eventually many that could be corrected were corrected mostly by the builder and a lot of hounding. Structural problems we could not correct but could patch over.
I never wanted to look in our attic where I was told ran a spider web of wires without any of that yellow plastic conduit that should have been used to shield the wires. Even the wire connections were only wrapped with black electrical tape.
That experience slowly opened our eyes as to the pitfalls of building in Thailand. I also consider ourselves very lucky to have sold the house after a year and not lost any money in doing so. This is definitely not the case in that same complex
now as many are willing to lose a bundle just to “unload” their house.

Fortunately for our next house we had a very reliable builder that we had known for a while and seen the work on his 3 previous housing estates. We had moved back to our condo in BKK and I decided early on to visit the site every 2-3
weeks, minimum then about 6 weeks before scheduled completion, started making weekly trips. There were things we caught that were not according to the plans and had them corrected. Even a small item like mounting a door on our master bathroom
to open to the left instead of directly into the sink on the right was not done right. I caught it on the plans and had it corrected there before we started but amazingly, my builder thought doors should always open to the right and it did
not matter what the plans showed, that was the way it was right to him. We had a “polite” discussion about it and it was changed. Had it not been changed my wife would have enjoyed having the door swing open on her back side
when she was at her sink. Wife would also have had a fit too with the clear view to the outside through the bedroom door from the toilet unless the door was completely closed. Opening to the left only half way closed that view off, (but wife
still closes it anyway and I could care less about it since one of our favorite restaurants has the urinals on the backside of the toilets with no wall between your backside and the road higher & behind you).

Very interesting. It seems amazing to me that there can still be so many issues. Having to be there on site all the time would drive me insane….

Why I Chose To Base Myself In Kuala Lumpur, Malaysia