A Visit to the Flooded Areas

A few weeks ago a good friend of mine who recently moved from Spain to Hong Kong decided to fly down to Bangkok to meet up with me for a long weekend. We hadn’t seen each other for almost a year so I welcomed the opportunity to catch up with Alex and hang out together. Alex had one particular request. He wanted to head out to the suburbs to look around the flooded areas. As it was the end of November Thailand had already seen the worst of the flood crisis, with water levels even in the worst affected areas having subsided markedly.

Discussing his request with some of my Thai friends I received mixed reactions. Some expressed an interest in coming along to see what the situation was like with their own eyes. Others expressed the opinion that we really shouldn’t think any further about going ahead with such a plan as we would essentially engage in disaster tourism which they considered a despicable thing to do, unless we thought of helping with the relief efforts. Eventually a friend of a friend suggested we could buy 10 pounds of pet food each and try to get it to the many stranded dogs and cats which had been abandoned by their owners in the flooded areas. Alex liked the idea so this is what we ended up doing.

Equipped with knee-high rubber boots, our cameras, and a substantial amount of pet food we set off by taxi to Pathum Thani. After an approximate 30 minute drive from Din Daeng we reached Future Park Rangsit where we decided to get out of the car. The taxi driver asked for an extra 100THB on top of the meter fare as he would have to backtrack a good part of the way we had come on the elevated express way as on the streets below the water was too high for his car to tackle. 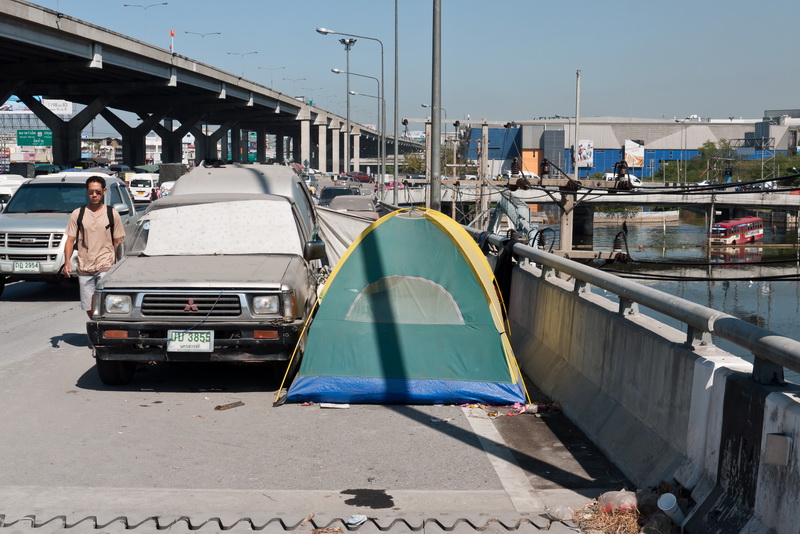 Approaching Future Park Rangsit on foot, walking down a ramp from the express way where our taxi dropped us of. Lots of people still parked their vehicles on the express way and its ramps in this area to safeguard them from the flood waters. Some people set up camp next to their cars.

Down at street-level trucks acted as public transport. 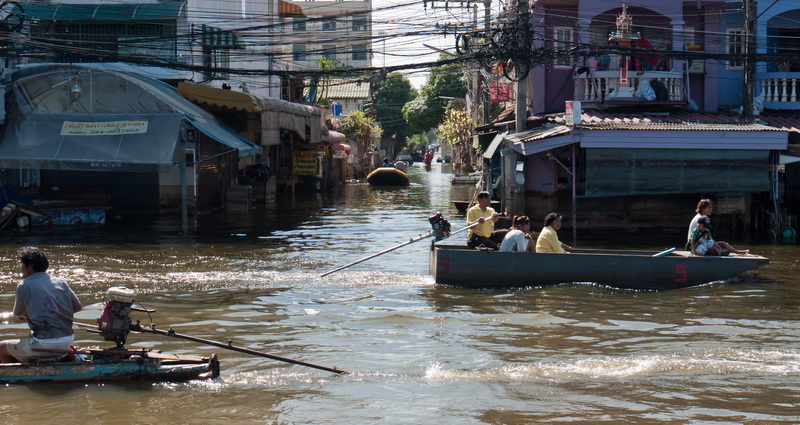 Boat traffic in the flooded sois along Nakhon Nayok. 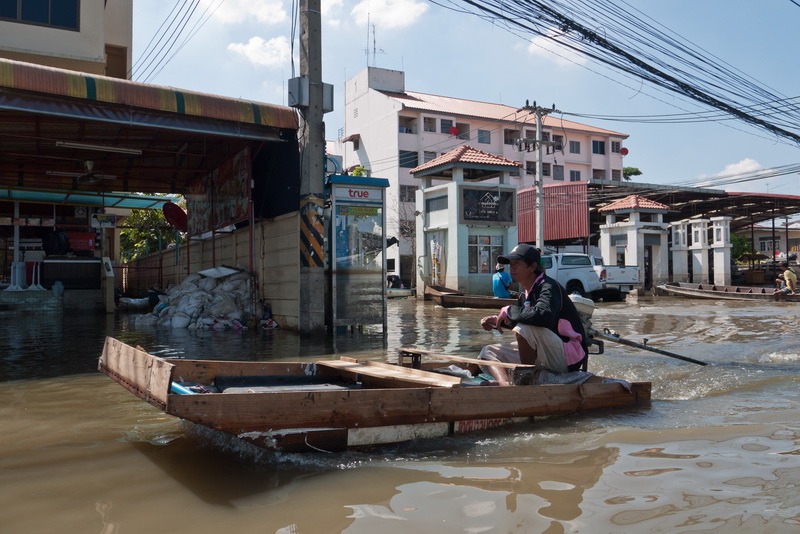 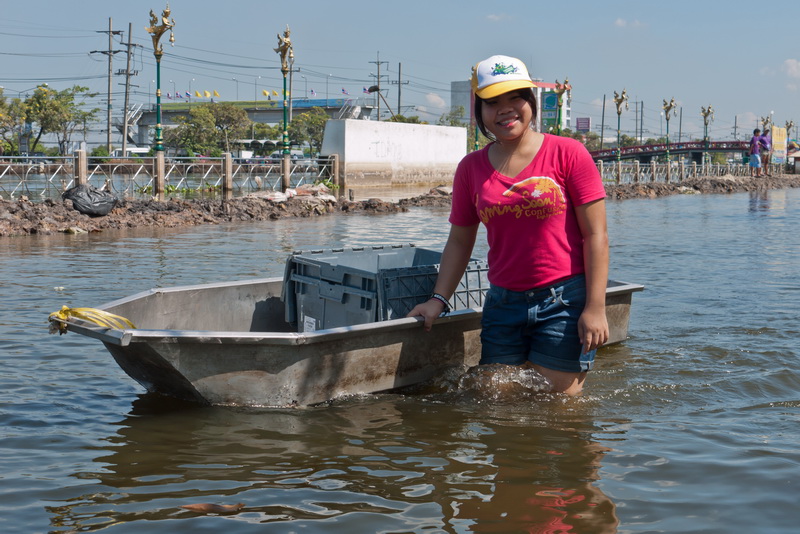 Weeks after peak flood people adapted to the realities of living in a flooded area to the best of their abilities. All kinds of boats, canoes, rafts, wooden boxes, and other contraptions were used to move people around and transport goods. There were also plenty of boats to hire, both motor and paddle. 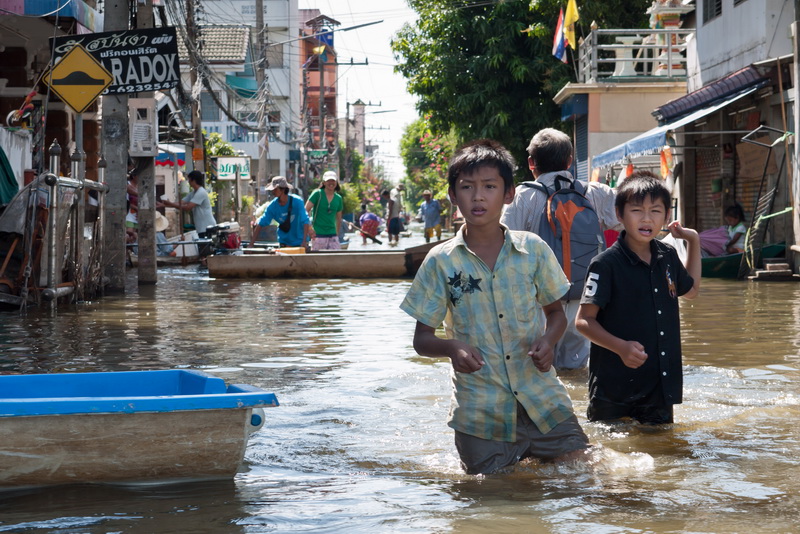 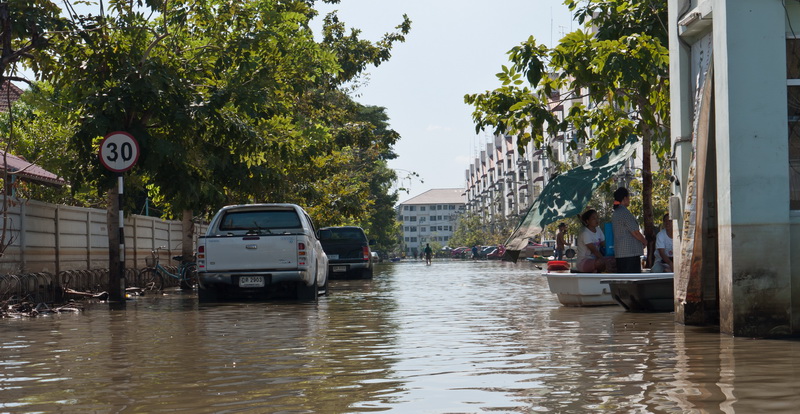 Flooded sois as far as the eye could see. Quite a sobering sight! 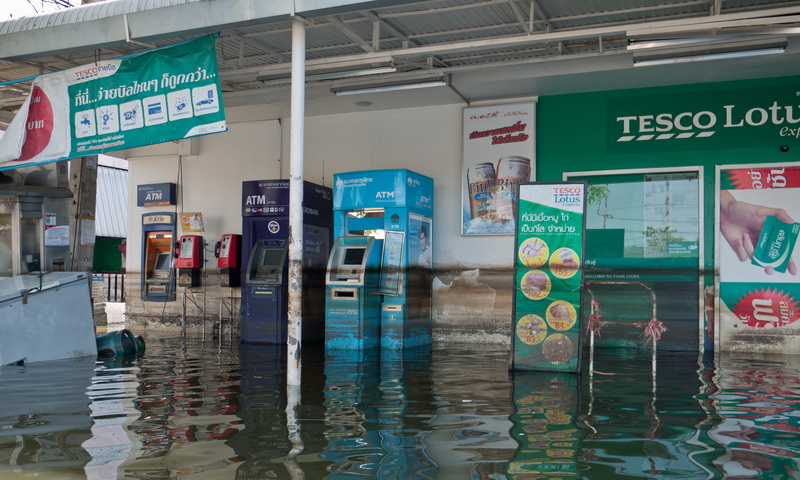 The grime line on the wall of the Tesco shop and the ATMs in front of it shows how high the floodwaters reached at their apex. 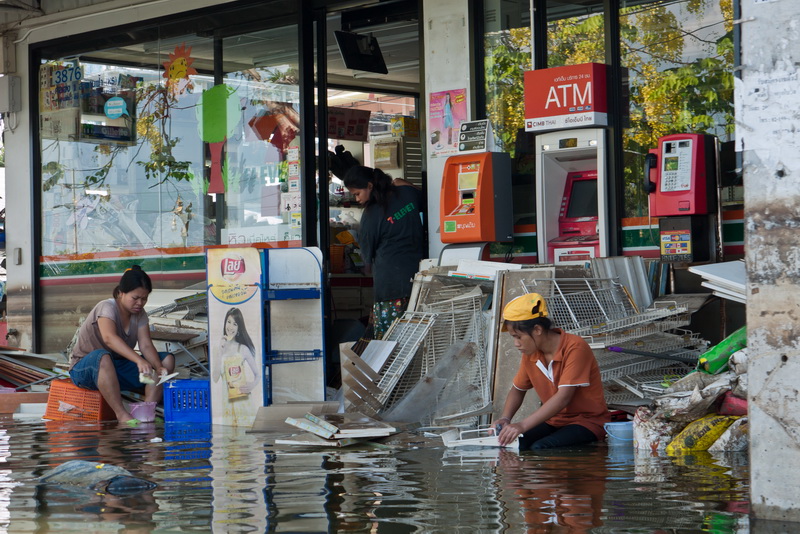 In many shops, such as this 7-11, people already started with clean-up efforts despite water levels still being rather high. 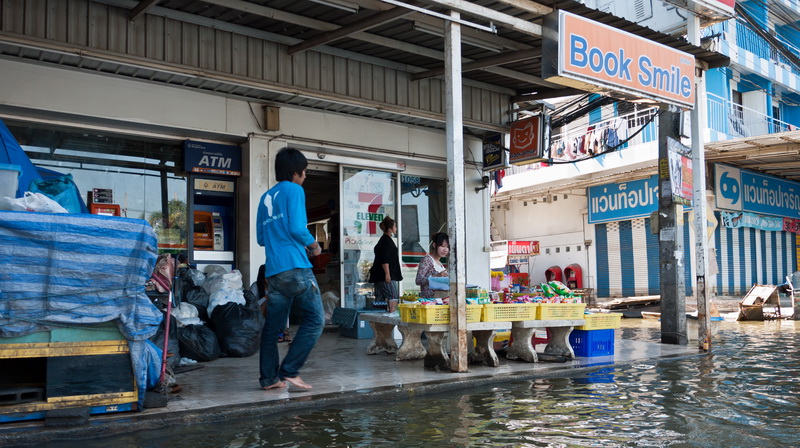 We passed another 7-11 a few hundred meters further on which had no electricity but was open for limited business dockside already. 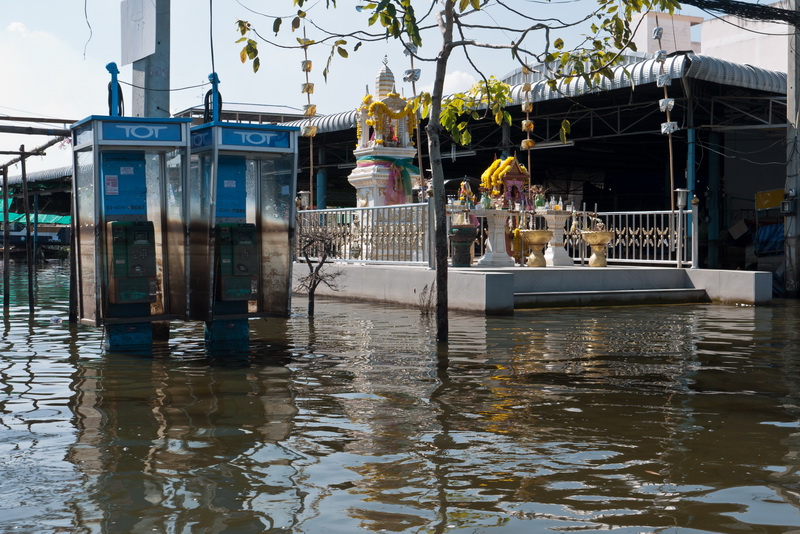 Again, take note of the grime line marking the maximum depth of the flood water. 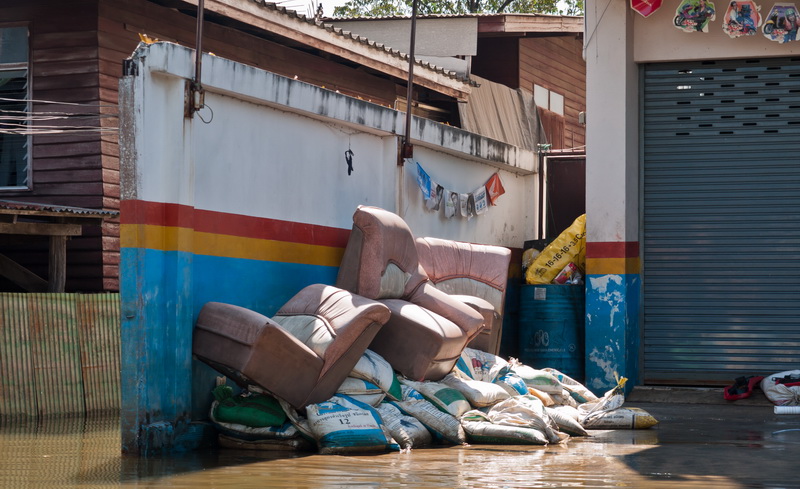 Keeping furniture dry by stacking it up on sandbags! 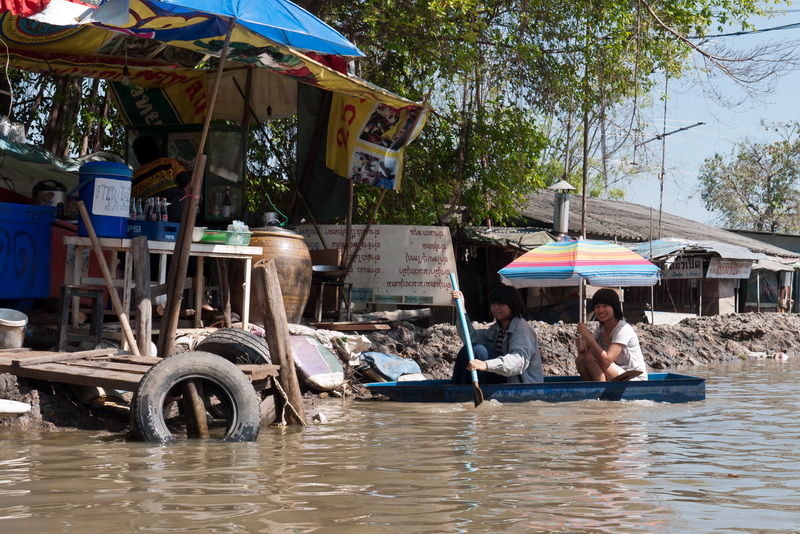 Local girls place an order at a “drive-in” noodle shop. 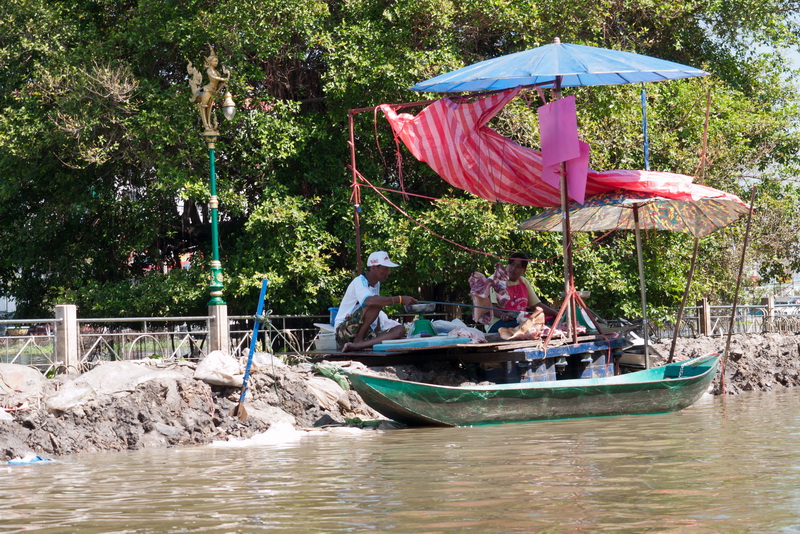 The local butcher was back in business already as well! 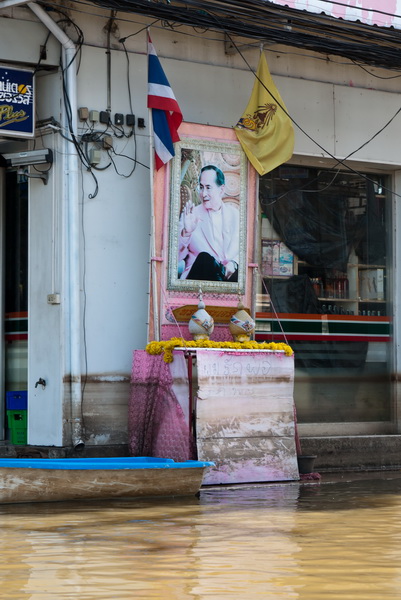 A portrait of the King was put up in the flooded street a few days before his 84th birthday.

This guy seemed unfazed by it all, at least for the moment… 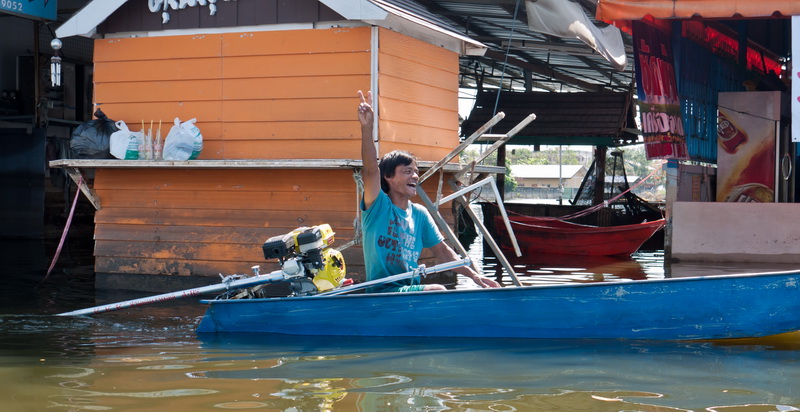 …while this guy appeared to be in high spirits!

A Different Kind of Girl Friend Experience (GFE) Part 2, The Art of the Deal…Thai Style