On Mother’s Day earlier this month, my girlfriend Nok, who is a school teacher at a kindergarten here in Samut Prakan, visited the local wat to pay her respects. That day she met “Bozo the Clown”, a local Thai dressed in a traditional clown costume, who was blowing up balloons, twisting them into creative shapes and handing them out to a host of delighted children. (Although he is a professional entertainer, his efforts on Mother’s Day were for free, in recognition of the occasion).

Nok, in her role as art teacher, had been given responsibility for organizing an arts festival to be held at her school and involving a number of other local schools. Amongst a raft of tasks she had been charged with developing a programme to include a number of stage shows.

Her boss, the school head, is, in my opinion, a corrupt, mean-spirited, ungenerous, unappreciative individual. Again this is only my opinion, but I also believe that a significant proportion of the funds for the festival, made available by local government, did not end up where they should have – certainly Nok had only a tiny budget to work with. He was, none the less, very concerned that the day went well primarily because the recently newly-elected mayor for the municipality would be making his first visit to the school. Nok, therefore had numerous meetings with him, frequently suffering criticism for perceived poor progress, and on one occasion being subjected to a rant in front of all the staff in which he actually used the words “khee nok!” because he didn’t think she would deliver on the day. She is a fairly strong person, but came home in tears that night. A number of her colleagues called to express their disgust at the head’s behaviour and to give her their support.

I digress a bit, though it is relevant to the story, but back to Bozo…

Nok asked Bozo his fee for attending her festival, and they agreed on a figure of 1000 Baht, this to include Bozo supplying all his own materials. Nok expected Bozo to show up for the festival and entertain the kids for a couple of hours or so. What actually happened was…

Bozo turned up the day before the festival and spent 4 – 5 hours creating a number of large designs depicting people and animals to enhance the stage presentation. He then arrived at 9.00 am on the day of the festival and spent the next 5 hours, with only a 15 minute lunch break, creating literally scores of balloon figures to give to the kids. I can vouch for this as I was there and watched with true admiration his dedication and patience. Throughout the day there was a steady queue of kids and I kept waiting for him to take a break, but whilst the kids were there, so was he. 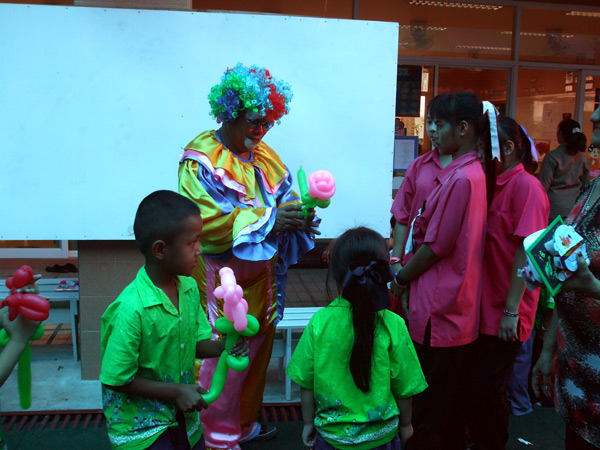 Nok talked to her boss and suggested they should provide a little extra remuneration, but, true to form, this idea was turned down – heaven forbid that his personal “take’ be reduced! (Sorry, I can’t vouch for that, but it is a feeling that just won’t go away!)

Bozo wasn’t the only “jae dee” performer that day.

Nok had contacted a group of blind musicians who agreed to play for free, but only asked for a donations box to be placed in front of their “gig”. (Nok got a bollocking for this as her boss felt it put pressure on some of the local bigwigs to “contribute”. I therefore enjoyed seeing the mayor start things rolling with a 1000 Baht note!)

She also found a couple of young instrumentalists, one female, one male, who played a couple of string instruments that I had never seen before. They played beautifully, and also spent 2-3 hours teaching groups of children. They had agreed to come from Bangkok free of charge. Our beloved boss, however, refused to even provide a contribution towards their travelling costs. Nok gave them 300 Baht of her own, hard earned, money for a taxi home.

The day itself was a great success, and, whilst accepting that I am somewhat biased, this was undoubtedly due in great part to the efforts that Nok had put in, and to the quality and personalities of the performers she had recruited. 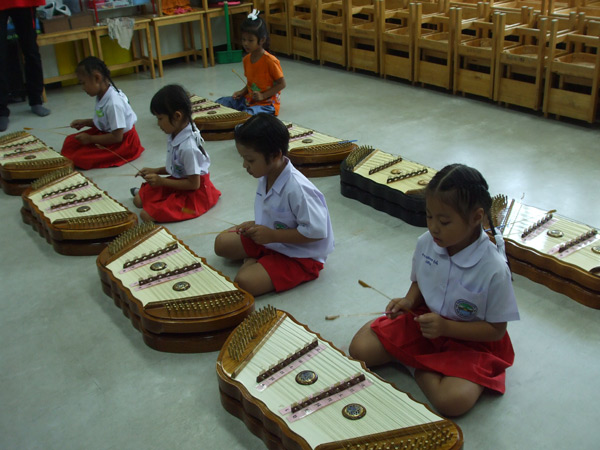 I got home that night from the festival with conflicting emotions. I realized that I’d seen two extremes of Thai behaviour in the space of a few hours. Three groups of performers that had exceeded by miles all that could be expected of them and, at the other end of the spectrum, behaviour from a person in a position of authority that was petty, arrogant, and rude.

This is Nok’s first posting as a government teacher and, as such, she has to spend 2 years at the school. Four of her colleagues, who have completed their 2 years are leaving in October, all citing the school’s regime and the management style as their reasons.

A number of submissions, and of course, the views of Stick, have exposed the poor education structure in Thailand. In my, admittedly limited, experience, this is not the fault of the teachers, but rather that of a disinterested, self serving minority in positions of authority.

I, unfortunately, have had the misfortune to witness this sort of thing first hand.

The Normal Side of Thailand, Statistically Speaking